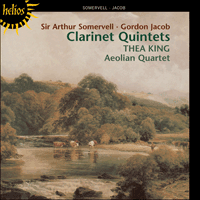 ‘The performances are euphonious and strongly committed’ (Gramophone)

Sir Arthur Somervell (born Windermere, 5 June 1863; died London, 2 May 1937) was one of those people capable of making a show on any instrument he picked up. Although there is no evidence that he had any tuition on the clarinet, our illustration shows that he did play it; and its date—circa 1913—is significant, for it was precisely at this period that he was writing the Clarinet Quintet recorded here.

In January 1881 Somervell was sent to Cambridge to study composition under Sir Charles Stanford (who also, much later, taught Dr Gordon Jacob). Two years later, at the age of nineteen, he obtained his BA and at Stanford’s suggestion went to Berlin to study at the Hochschule für Musik. His teachers there were Friedrich Kiel and Woldemar Bargiel. Kiel had been Stanford’s mentor and was of the sound classical school (he wrote an Elegie for clarinet and piano). Bargiel was a disciple of Schumann and step-brother to Schumann’s wife Clara. In 1885 Somervell returned to London and, again at Stanford’s suggestion, became a student at the Royal College of Music under Sir Hubert Parry. This was followed in 1887 by two years as a private pupil of Parry. In 1894 Somervell joined the staff of the Royal College of Music. From 1901 to 1928 he was Inspector of Music to the Board of Education and is well remembered today as a music educationist.

Somervell’s greatest successes came from his vocal and choral compositions. His instrumental music which he wrote later in life included, besides the Clarinet Quintet, compositions for orchestra, for piano and for violin. He did not strive after novel effects and his style is reminiscent of at least half a century earlier. (In contrast, his son Hubert showed marked adventurousness in a song-cycle What silent love hath writ for tenor, clarinet and strings.) This late-Romantic style was of no disadvantage where the choral works were concerned and they were readily accepted into the repertoire. With the instrumental works it had the opposite effect, and after their initial performances they were not revived. The Clarinet Quintet was no exception. It was given its first performance by Haydn Draper in London’s Wigmore Hall on 19 May 1919 and then forgotten. Now, over eighty years later, it is possible to realise that this beautiful and well-constructed work has considerable value to the clarinettist as a quintet in late-Romantic idiom, of which there are few examples.

Somervell, like Brahms in his quintet Opus 115, uses the A clarinet for his first movement and opens in impassioned compound duple time. The Intermezzo which follows is gentle in character and in basic three-part form. The slow third movement is in variation form. Both the second and third movements are scored for the B flat clarinet but in the final movement Somervell, like Stanford in the Concerto Op 80, turns again to the A instrument and writes an opening theme which has all the sparkling zest of his master.
(Pamela Weston)

Frederick J (‘Jack’) Thurston, to whom, jointly with the Griller Quartet, my Clarinet Quintet is dedicated, was a fellow-student at the Royal College of Music and became famous in later years for the musical and technical excellence of his clarinet playing. While still a student he gave remarkable performances of concertos and chamber music, including Stanford’s concerto which is a formidably virtuoso work. I was studying composition with Sir Charles Villiers Stanford at that time and I remember how delighted he was with the young player’s interpretation of his work.

It can be imagined with what pleasure I accepted an invitation to write a quintet for Jack and the celebrated ‘Grillers’. The first performance was given during World War Two in London’s Wigmore Hall. Jack’s tragically early death deprived the world of one of its most gifted clarinettists and it is to me a source of deep satisfaction that his brilliant ex-pupil (and widow), Thea King, has made this recording.

The quintet is in four movements:

I: ‘Tempo moderato’: the principal theme, played by the clarinet at the opening, owes its ‘autumnal’ character to the use of the ascending form of the melodic minor scale in both rising and falling phrases. The second subject maintains the same kind of atmosphere and the effect of the movement as a whole is not melancholy but is quiet and contemplative.

II: Because of the need for complete contrast the scherzo is placed here. It is largely founded on the energetic rhythm hammered out by the strings at outset, and there is a sense of urgency and bustle which is only dispersed when the ‘trio’ is reached and the music becomes quiet and peaceful. With the return of the scherzo material, further energetic treatment is given to it, but the brief coda harps back to the ‘trio’ and there is a quiet ending.

III: The slow movement, marked ‘Poco lento’, is rhapsodic and free in form, though based on and developed from clearly defined themes, phrases and harmonic progressions. I was here aiming at disclosing the expressive eloquence inherent in this richly evocative medium.

IV: ‘Introduction, Theme and Variations’. The Introduction starts in the key and with the melodic phrase with which the slow movement ends, but the clarinet gently leads the strings into the key and mood of the Theme which, like the first movement’s subject, is derived from the ascending form of the melodic minor scale. The Variations do not all follow the lead of the theme in his respect. There are five in all and they include a march and one in which the lowest notes of the clarinet are combined with those of the lower strings and refuse to be coerced into upper regions by the high notes of the violins. The last variation is, to some extent, fugal in texture, and vivacious in character, but suddenly becomes hushed right at the end, to finish with two quiet pizzicato chords. Perhaps some slightly jazzy rhythms will be detected in this extended final variation.
(Gordon Jacob)