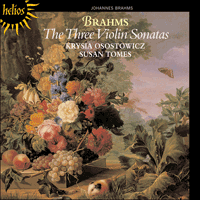 ‘Subtle enough to suggest that for both artists these performances were a revelatory voyage of discovery’ (Gramophone)
‘Krysia Osostowicz and Susan Tomes have a wonderful naturalness about their playing; it is true chamber music’ (The Times)

‘Sitting at the piano, he began to disclose wonderful regions to us. We were drawn into even more enchanting spheres. There were sonatas, veiled symphonies rather, songs, the poetry of which would be understood even without words … sonatas for violin and piano, string quartets, every work so different that it seemed to flow from its own individual source …’

Unlike Robert Schumann, here introducing the young composer to the readers of his journal in 1853, we will probably never know just how Brahms’s earliest violin sonatas sounded. For though he soon published piano sonatas and songs, violin sonatas (like string quartets) had to wait for the full fruits of his maturity before he felt willing to publish any. Only the single movement which he contributed to the collective sonata for the violinist Joachim, whose other movements were written by Dietrich and Schumann himself in the same year (and never published in Brahms’s lifetime), survives to offer a clue to the possibilities: a driving scherzo in C minor which immediately suggests Beethoven. But when the first published sonata, in G major, appeared in 1879, it was a very different affair. Like its sequel, the Sonata in A major, completed in 1886 and published the following year, the mood is predominantly lyrical, with a flexibility of expression which puts one immediately in mind of the Violin Concerto and Second Symphony from the same period. Only in the Third Sonata, in D minor, of 1886–88, does the minor key signal a tougher mode of utterance.

If much of Brahms’s mature instrumental music suggests songs, nowhere is the connection more explicit than in the G major sonata. Its third, and final, movement is based on Brahms’s song ‘Regenlied’ (‘Rain Song’), Op 59 No 3, to a text by his fellow North German, Klaus Groth. The poem recalls rich childhood memories, triggered by the patter of rain on the window-pane, and obviously evoked powerful memories in Brahms as well. Not only does the melody, which is in the minor key, possess a wistful, longing character, but it is used again in the following song of the opus, ‘Nachklang’ (‘Echo’), to another of Groth’s poems where the imagery is turned to bleaker ends, now directly addressing vanished youth. The possibilities of recollection are naturally taken much further in the sonata. Here the melody itself (now in G minor) is extended to serve as a complete subject, leading to a transition and second theme to complete the exposition of a rondo, with constant allusions to the dotted figure of the opening. But the allusions extend beyond this movement.

The very opening of the sonata has this rhythm, and Brahms extends it into a wholly distinctive, yet complementary theme, this time more expansive, as befits the first subject of a sonata form. The link to the finale is yet further strengthened when another variant of the dotted rhythm appears towards the end of the development, now stressing G minor before the reprise restores G major. But the composer is not content only to play with the wistful recall of the idea—as he is to do even more with the theme of the finale in its closing bars. G minor opens up the possibility of E flat as a closely related key, and this is where Brahms places his soulful ‘Adagio’, an almost funereal movement where the sense of loss is at its greatest. So what a surprise it is when this very theme reappears (in E flat major again) as the central idea of the Rondo, now at ‘allegro’ tempo, and given to the violin, its winging sequel seeming to sing of resolution, of joyful acceptance, a quality deeply endorsed in the closing bars where it merges with the dotted figure in a tranquil recollection, the happiest memories of the ‘Regenlied’ now seeming to pervade all.

In the Sonata in A major the lyrical element is more confined. From the outset the piano phrases are short and neatly balanced, though the brief echo in the violin suggests (like the mobile harmony) a lyrical flowering to come. But only with the second theme does the bloom really appear, and again it is the recollection of a song which is the prompt. ‘Wie Melodien zieht es mir leise durch den Sinn …’ (‘Like melodies it steals softly through my mind …’) is another Klaus Groth poem which uses symbols to express the transient nature of experience, though here in a more abstract manner and with more specifically musical connection. Melody vanishes like the fragrance of spring flowers, and mere words cannot capture feeling: only the lyric’s blend of music and word can give the real poetry which embodies a lasting emotion. And Brahms shows in his setting (published as Op 105 No 1) that his melody and its treatment can complement the poem and deepen its effect. In its sonata context, this theme is presented in subtle rhythmic transformation by the piano, the broad duple beat of the song now yielding to a more animated triple, and initiating a passage of almost improvisatory flexibility—instrumental poetry—before the music settles to a closing figure. This too is destined to provide the source of a transformation, for the development eventually resolves into a gentle, intermezzo-like variant of it, a quite distinct passage, very unlike the continuous unfolding in the development of the first sonata. And once this passage is ended, the reprise comes directly, without the need of any connecting material.

This directness of lyric expression is just as prevalent in the finale where, as in the first sonata, Brahms manages to create a theme with remarkably similar properties, yet quite distinct character, offering opportunities for an entirely fresh response. Here it initiates a rondo, though one in which the returns are so varied as to create a sense of continuity rather than contrast. Again it is but a brief closing figure which prompts the second theme, now supported by an atmospheric writing for the piano which represents a new feature of Brahms’s handling of the medium.

The middle movement combines two types of movement into one, thus greatly extending the expressive range of the entire work: a gentle and rather gracious ‘Andante tranquillo’ alternates with a dancing ‘Vivace’. But the directness of statement is offset by the way in which the ideas recur: for the Andante returns in D major, rather than the expected tonic F, and the Vivace is in a rhythmic variation, with the violin now providing a pizzicato counterpoint. With the third and final return of the Andante, Brahms seems reluctant to make the inevitable move from D back to F: indeed, he only clinches it with the final touch of the Vivace, whose return as a coda is a ripe piece of Brahmsian humour.

If G major and A major are essentially lyric keys for Brahms, D minor takes us back to the passions of the composer’s youth, to the First Piano Concerto and the First Ballade for piano, both works by turns brooding and violent. The theme of the finale of the Violin Sonata in D minor could certainly be imagined as a product of this period. The driving rhythm in 6/8 time recalls the C minor Scherzo of the sonata for Joachim, though the mature master now draws effortlessly from the new ideas to sustain a complete sonata movement in which the smallest figure may flower into something new. The textural balances between violin and piano, so carefully observed in the major-key sonatas are not as easily achieved here, and the piano part is much closer to Brahms’s later concerto manner than to chamber music: it seems not inappropriate that the work is dedicated to the great pianist, Brahms’s friend Hans von Bülow.

Things are more restrained in the first movement, the intensity of which is more inward and sustained from the very start. The sense of a controlled, ongoing line which will eventually break free becomes the preoccupation of the development section, a remarkable passage built entirely over a pedal on the fifth degree, A, which inhibits, though never resolves, the constantly shifting harmonies above it. Only when harmonic movement resumes in the reprise does the urge for freedom take over, with bold modulations which seem to announce the development proper, though the retransition to the home key and second theme is soon accomplished. The contrast offered by this lyrical theme, again given first to the piano, is greater than in the other sonatas, and one is very conscious of its vulnerability and transience when the sterner mood returns, though the return of the pedal, now on the tonic, D, leaves the tension at least temporarily resolved.

For the first time in these sonatas Brahms provides this work with two separate middle movements, though neither is expansive. The ‘Adagio’ captures the intensity of the slow movement of the G major sonata, though in a much shorter space: the power is here more closely associated with instrumental idiom, the suave thirds of the violin part at the climax touching the Hungarian manner so important to Joachim, by whom all Brahms’s violin writing was ultimately inspired. The third movement re-engages with the playful ‘Vivace’ character of the A major Sonata, though now from a greater distance and with a reflective restraint, as the final bars show. They offer a perfect foil to the strenuous finale to follow.

Whether any of the material from these sonatas was contained in the music Schumann heard in 1853, when he first knew Brahms and his music, we can never know (though we may continue to hope that something may still turn up to tell us). But it is certain that the music’s greatest feature, its beautiful blend of ideas and their treatment, which seems to grow more natural and more focused with each successive work, could only have come with a master’s full maturity—even one as richly endowed as the young Brahms.