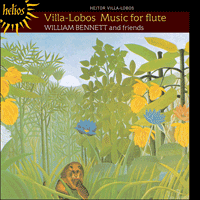 ‘[A] box-full of ingenious vitality’ (BBC Music Magazine)
‘A disc of outstanding artistry’ (The Good CD Guide)
‘A disc of pure delight from beginning to end. Another example of why Hyperion gets my vote as the most innovative record label. Full marks!’ (Which CD)

Heitor Villa-Lobos, born in Rio de Janeiro in 1887, has, by virtue of both his immense output and colourful and accessible musical language, become the most celebrated Brazilian composer of all time. His work not only richly typifies the diverse and kaleidoscopic Brazilian scene but also, in its abundance, originality, and vitality, provided the key which unlocked Brazilian art music once and for all from the shackles of European late-Romanticism.

After the death of his father in 1899, Villa-Lobos, determined to escape the medical career planned for him by his mother, spent time playing (probably cello and guitar) in the ad hoc musical groups which performed and improvised in Rio’s cafes, on street corners, and at parties and weddings—the chôros. He then travelled in Brazil, absorbing musical influences from his country’s three main ethnic strands—Portuguese, African and Amerindian. This all resulted in the realization that the glorious aural amalgam which so impressed his soul was indeed the means by which concert music in Brazil would be revitalized and given a voice of its own. After much, sometimes eccentric, experimentation in orchestral and chamber compositions where traditional European traits lay side by side with quasi-Amerindian or African features, Villa-Lobos finally achieved his long sought-after new musical forms and language in the great series of Chôros (fourteen works, 1921–1929) in which the imitation of the music of true chôros was only one element.

Villa-Lobos’s use of the word chôros as a generic title is broad-based: it implies spiritual concept, actual technique and form. The individual works in the series do not merely reproduce the sounds of improvised music-making, but rather attempt to use these as the starting point for an aural depiction of all aspects of Brazilian life. Urbane-type folk melody lies alongside material based on Amerindian modes and rhythms; imitation of jungle sound merges happily with the razzmatazz of modern city life. The spirit of chôros suffused all Villa-Lobos’s instrumental compositions from around 1920 until 1930, and many thereafter.

After some success and much controversy as a composer in Brazil, Villa-Lobos made his way in 1923 to Paris, at that time the cultural centre of Europe, where every aspiring musician, artist and writer felt it obligatory at least to put in an appearance. The artistic ambience of Paris during the 1920s was particularly suitable for the acceptance and promotion of Villa-Lobos during his subsequent periods of residence there, until a final departure in 1930. Indeed, even before his own arrival several of his works were heard and applauded in the French capital, played by his compatriots or by European artists who had met the composer in Brazil. African music and jazz were particularly in vogue and the strange sounds of the music of the East so beloved by Debussy and Ravel still echoed loudly. The clear-cut, quixotic melodies of Milhaud and Poulenc were favoured, while Stravinsky’s rhythmic vitality affected everyone. Villa-Lobos’s highly coloured, strangely conceived, and rhythmically assured music thus found an ideal home in Paris during the 1920s.

The composer Jean Wiener was one who had previously heard and admired some of Villa-Lobos’s music, and it was he who organized the first major Villa-Lobos concert out of Brazil which took place at the Salle des Agriculteurs in Paris on 9 April 1924. In addition to three Villa-Lobos works, compositions by Stravinsky, Wiener himself and Villa-Lobos’s old friend Milhaud were performed.

The concert included the first performance of the 1921 Trio for oboe, clarinet and bassoon, considered by many Brazilian commentators to be the most important chamber work by the composer written to that date, consolidating as it did the chôros-like experimentation made in similarly scored works dating from 1916 onwards. Always fascinated by the raw sounds of wind instruments, Villa-Lobos here indulged in harmonic clashes, rhythmic dexterity, and dynamic extremes, all charged with a particularly Brazilian ethos. Contrapuntal ingenuity is more than evident, especially in the final movement, reminding the listener that the Bachianas Brasileiras were even now struggling for birth.

The contrapuntal nature of many passages in the Chôros series is clearly demonstrated in Chôros No 2, a duo for flute and clarinet written in 1924. This is one of only two compositions dating from that busy year of concert-giving and travel, the other being Chôros No 7, a larger chamber work which also employed flute and clarinet as leading voices. The spikily humorous dissonances, imitations, and syncopations of Chôros No 2 are all direct descendents of the improvisatory music of Rio’s street musicians in which the two instruments predominated. The work may also be seen as a genuine two-part invention, again prefiguring the conception of the later series of Bachianas Brasileiras. Villa-Lobos even made his own transcription of the work for piano.

The contrapuntal ambience of much true chôros music and its reflection in Villa-Lobos’s concert music merely served to underline his thesis of Bachianas Brasileiras and provides the unifying common denominator between the two great series of works. What Villa-Lobos wished to achieve in the nine Bachianas Brasileiras (1930–1945) was a rarefied chôros, paying homage both to Brazilian life as he saw it and to the greatest of his European predecessors, Bach. Directly related to Chôros No 2 was Bachianas Brasileiras No 6, a duo for flute and bassoon written in 1938, the first movement of which even borrows the word chôro for its subtitle. The esoteric and recherché devices employed by Villa-Lobos in this work, however, set it apart from Chôros No 2, and in spirit it looks forward to the great classical fugue that forms Bachianas No 9, or even to the purity of the final string quartets. Bachianas No 6 was first published in 1946 in a special anthology of Brazilian music which gives a particularly succinct picture of the country’s musical diversity at that time.

The Quintet for flute, oboe, cor anglais, clarinet and bassoon (‘em forma de Chôros’) was written in Paris in 1928. It is thus contemporary with the main Chôros series and could easily have been included in it. Multi-sectional, alternately lyrical and forceful, spiky, chaotic, and wilful, the work was indeed better received than many of the Chôros themselves, and has been much performed since its first hearing on 14 March 1930 at the Salle Chopin, Paris, a concert at which Edgard Varèse also directed performances of his own works.

Upon return to Brazil, Villa-Lobos’s involvement with politics and educational music-making after the 1930 Getúlio Vargas coup meant that he was responsible for the organisation of a great many public ceremonies and events at which music was used to glorify the country’s achievements and aspirations and to stimulate a sense of unified nationhood. These activities reached their height in 1937. At one of the ceremonies in Rio de Janeiro that year, ostensibly celebrating the end of an academic period, a work for flute and guitar by Villa-Lobos, Motivos Gregos, was first performed, which here included optional chorus and ballet. It was eventually published as Distribuição de flores (‘Distribution of Flowers’) ‘based upon Greek motifs’. The short work evokes the same Greek antiquity in which Villa-Lobos had immersed himself during the composition of several early symphonic poems (1916), in turn stimulated by a love of classical myth instilled by his father.

The fantasy piece for flute and cello, Assobio a Jato (‘The Jet Whistle’), was written in 1950 in New York and was first performed on 13 March 1950 in Rio de Janeiro. It is dedicated to Elizabeth and Carleton Sprague Smith (flautist and musicologist), and continues Villa-Lobos’s predilection, already seen in this recording, for writing high- and low-voiced instrumental duos. The piece is primarily a musical joke, playing on the natural characteristics of both instruments. Divided into three short movements, the colourfully lyrical, bustling world of the eclectic Villa-Lobos is encapsulated here in the fluid lines and virtuosity of both partners.

In 1958 Villa-Lobos was asked to write the score for a Hollywood screen adaptation of W H Hudson’s South American novel Green Mansions. The MGM film was not successful, but Villa-Lobos’s music (only his second film score, written purely because the story was of his beloved forests and jungles) lived on in the form of a suite which includes a love-song, Canção do Amor, available in versions for voice and guitar or voice and orchestra. The first performance of this song in concert form was given at the Empire State Music Festival on 12 July 1959, the last concert that Villa-Lobos conducted before his death four months later. It is written in the manner of the old Brazilian serenade, seresta, and is recorded here in a transcription for flute and guitar.

From the many examples of the Brazilian Modinha provided by Villa-Lobos, that recorded here, for flute and guitar, is a transcription of a song from the set entitled Serestas for voice and piano, and was written in Rio de Janeiro in 1926. The modinha was a sentimental type of love-song popular in the eighteenth and nineteenth centuries, characterised by melancholy, sequential, and syncopated melody usually in the minor mode, with simple accompaniment. The text of the original song speaks of unrequited but never-ending love, and is set with typically Brazilian anguish and longing.