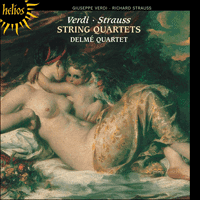 Written within a few years of each other, the two quartets on this disc are the sole examples in the genre by composers overwhelmingly associated with the operatic stage. Each, in its different way, pays homage to the Viennese masters who perfected the medium of the string quartet. But there any affinity between the two pieces must end. Verdi’s Quartet, written when he was nearly sixty, is a work of subtle mastery that proclaims the composer’s individual voice on every page. Strauss’s is the work of an adolescent, astonishingly assured but giving not the slightest hint of the future creator of Don Juan, Elektra and Der Rosenkavalier.

We owe the existence of Verdi’s only extended instrumental work to pure chance. During the winter of 1872/3 the composer was in Naples supervising revivals of his two most recent operas, Don Carlos and Aida. Shortly after Don Carlos opened, his leading soprano, Teresa Stolz, fell ill and rehearsals for Aida had to be postponed. Left with time on his hands during March, Verdi occupied himself by composing a string quartet. On 1 April he invited a group of friends to the Hotel delle Crocelle where, without a word of introduction, four players entered the foyer and embarked on the first performance of the E minor Quartet. Although it was enthusiastically received, and was immediately repeated, Verdi spoke deprecatingly of the work, insisting that he ‘wrote it for mere amusement’ and had ‘never attached any importance to the piece’. For three years he forbade its publication and performance, only relenting in 1876 after continual requests from music societies and his publisher, Giulio Ricordi.

Though Verdi’s dismissive attitude towards his Quartet should not be taken entirely at face value, it may well be that his reluctance to publish the work was bound up with his profound admiration for the quartets of Haydn, Mozart and Beethoven, and a feeling that he, an Italian, had encroached upon territory rightfully occupied by the great Viennese musicians. Yet, as Verdi himself must have secretly acknowledged, he created a work of intense individuality whose grace and lightness of touch conceal an exquisite craftsmanship. There is nothing remotely operatic about Verdi’s treatment of the medium: the textures are woven with the finesse and delicacy of true chamber music. Indeed, it is possible to feel that the experience Verdi gained in composing the Quartet bore fruit in the wonderfully refined instrumental writing in the two final Shakespearean operas, Otello and Falstaff; certainly the Quartet’s final fugue looks forward twenty years to the bubbling closing ensemble of Falstaff.

Verdi handles classical sonata form with ease and subtlety in the opening Allegro, which contains a wealth of sharply characterized ideas within a tautly controlled design. The affinity between the first theme and a motif in Aida depicting Amneris’s jealousy has often been noted; on its repetition this theme is accompanied by a little staccato figure on the cello which is imaginatively transformed and developed during the exposition. After initiating a brief fugato it quietly underpins a new, restlessly modulating idea, is vigorously worked in contrapuntal combination with the opening theme and, finally, is expanded into a powerful unison sequence. In the midst of the exposition’s intense activity appears the reposeful second subject whose gracious lines and gently expressive chromatic harmonies unmistakably recall Mendelssohn. The superb development, often held down to pp or ppp, weaves together the main theme and the pervasive staccato figure in close counterpoint. Having concentrated intently on the opening theme in the development, Verdi omits it entirely from his condensed recapitulation, which opens in E major with the Mendelssohnian second subject but returns to the minor for the agitated animato coda.

Poised somewhere between a minuet and a mazurka, the Andantino in C major recreates something of Haydn’s spirit in terms of Verdi’s personal idiom. The fastidious elegance of the main theme, with its teasing tonal ambiguity, is rudely threatened by abrupt forte outbursts. An extended central section contains a shortened restatement of this theme, in a distant G flat major, between two vividly contrasting ideas—a hushed, conjunct melody of utter simplicity, sounded first in A minor and then, in a more expressively lyrical version, in B major; and an impassioned theme in pounding semiquavers which is cunningly derived from a tiny cello figure heard beneath the A minor melody. After a full reprise of the opening section a coda subtly draws together the movement’s diverse elements.

With its biting accents and sudden dynamic contrasts the third movement, back in E minor, is a scherzo of demonic energy which, as Julian Budden points out, looks back to the ballet music in Macbeth. There is also, in the whispering staccato central section, an uncanny reminiscence of the Scherzo of Beethoven’s final Quartet, Op 135. The A major Trio is the most overtly Italianate part of the work—a gloriously uninhibited cello melody sung beneath a simple pizzicato accompaniment.

Verdi had a number of precedents for fugal finales in the classical quartet repertoire, including five of Haydn’s and Beethoven’s Op 59 No 3. His own finale, Scherzo fuga, glances back at classical models but emerges as triumphantly individual as the previous movements. A tour de force of contrapuntal dexterity, complete with all manner of intricate fugal devices, it wears its learning with nonchalant lightness. The music’s unquenchable élan is enhanced by the kaleidoscopic changes of texture and by a ceaseless chromaticism that often blurs the tonality. Towards the close E major is firmly established as the fabric becomes less fugal, though the main subject is wittily and ingeniously developed right to the final peroration.

The conservative idiom of the young Strauss’s quartet is hardly surprising. Richard’s father ensured that his prodigiously gifted son received a thorough grounding in the classics while sternly disapproving of the heady romanticism of Wagner and Liszt. Later in life Strauss himself claimed that until the age of fourteen he heard nothing but the established repertoire. It was natural, therefore, that his earliest works, including the String Quartet, should be meticulously modelled on his great forebears. Composed during 1879 and 1880, the A major Quartet was dedicated to Strauss’s violin teacher, Benno Walter, whose ensemble gave the first performance, in Munich, on 14 March 1881. Though it was refused by the renowned publishers Breitkopf und Hartel, who can hardly be blamed for their lack of clairvoyance, the Quartet was accepted by the smaller firm of Joseph Aibl, who published it as Strauss’s Op 2.

Listeners coming to the outer movements without prior knowledge might well think they were the work of a gifted younger contemporary of Beethoven imitating the manner of the master’s Op 18 quartets. There is a whiff of Mendelssohn, of Schubert too in the con espressione second subject of the first movement; but the shape and balance of the themes, the cut of the cadences, the purposeful motivic working and the contrapuntal fluency, with thematic interest skilfully shared between the four voices—all these are strongly evocative of much of Beethoven’s first-period chamber music. But Strauss’s youthful over-eagerness to do justice to his thematic material is evident in both outer movements where the development sections, despite their complexity and diligent workmanship, are over-extended and reproduce the outlines of the exposition rather too closely.

Of the two inner movements the Scherzo, placed second, is an invigorating and entertaining piece, with fierce Beethovenish off-beat accents, suave Mozartian cadences and a recurrent drone bass that irresistibly recalls the Haydn of the late quartets. The Trio, in complete contrast, introduces a sinuous, slightly plaintive violin solo in a slower tempo. Though it touches no depths of feeling, the B minor Andante, in sonata form, has an attractive Mendelssohnian wistfulness; and Strauss’s treatment of the violin semiquaver figure which accompanies the second theme, and which permeates the development, is both neat and resourceful.