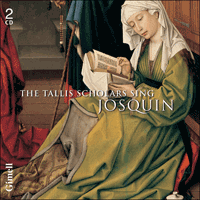 Cover artwork: The Magdalen Reading by Rogier van der Weyden (1399-1464)
Reproduced by permission of The Trustees, The National Gallery, London

"If one were looking for a superstar among Renaissance composers then Josquin is unquestionably the front runner. He was a star in his lifetime and he has become a star again more recently, aided in part when the recording of the two Masses on the first disc of this collection won the Gramophone Record of the Year Award." (Peter Phillips)

‘In his unprecedented stature and his undisputed pre-eminence in the eyes of his contemporaries and posterity, Josquin has never failed to remind recent historians of Beethoven, who was similarly regarded 300 years later, and who retains a similar quasi-legendary aura’ (Richard Taruskin).

If one were looking for a superstar among Renaissance composers – and identifying such people does no harm to the subject as a whole – Josquin is unquestionably the front runner. He was a star in his lifetime, travelling more widely, being paid better and having more desirable employment than anyone else; and he has become a star again more recently. It is true that in the centuries in between it has been Palestrina and Tallis who were performed more consistently, where Josquin was forgotten, but this was on account of their simple music, which choirs of any ability could sing. Josquin didn’t write any simple music. All his music is complex, intellectually and vocally, posing problems which have only recently been found to represent a supreme challenge. As with Beethoven it is now recognized that facing up to Josquin’s message can bring unparalleled rewards; and, more than anywhere else, it is now clear it was in his Mass settings that he expressed that message at its most fluent.

There are perhaps fifteen Mass settings by Josquin, all of which are essentially scored for four voices. This scoring in itself distinguishes them from much of his other writing, since elsewhere he could delight in fuller sonorities. Praeter rerum seriem (track 12 on the first disc of this collection) proves the point. Here is a motet for six voices whose opening bars have the sonority of an entire string section in a Romantic orchestra (this passage always makes me think of the funeral march in Mahler’s first symphony). Such richness is rarely to be found in the Mass music, where instead Josquin concentrated on sparse detail, intense dialogue between the voices, the working and reworking of tiny melodic ideas: more string quartet intimacy than string section grandeur. For this, four wide-ranging voices were the ideal medium, able to be used in duets and trios as much as all together, without forcing too great a change in the impact of the sound. The one proviso was that the ranges should be wide, so that the musical meetings could take place, as it were, anywhere: high, low, at the unison or octave at will. These ranges are part of the challenge for modern groups – no conservatoire will train its singers to have the lightness of touch Josquin demands over nearly two octaves – but the challenge has been found to be worth shaping up to, and a modern solution to it has increasingly been found both in Europe and America.

The process of searching out such a method was significantly advanced when the two Masses included on the first disc of this collection won the Gramophone Record of the Year Award in 1987 and were widely played. It helped also that they were two of the finest of all Josquin’s compositions. The Missa Pange lingua may have been his last Mass setting, even his swan-song, and it was not published until after his death, in 1539. Certainly it shows some of the characteristics associated with ‘late period’ compositions, not least by Beethoven: the relaxing of purely mathematical ways of writing in favour of freer ideas, often in the style of a fantasy. The Missa Pange lingua has been called ‘a fantasy on a plainsong’ (by Gustave Reese), in which Josquin broke the Pange lingua melody up into smaller phrases, motifs and rhythmic units, which the voices explore in just the kind of polyphonic dialogue I mentioned above. Nowhere else in the repertoire is this endlessly supple style managed so perfectly. After spending almost the entire setting being pulled to pieces and examined from different perspectives, the chant melody – which was originally sung as a hymn for the feast of Corpus Christi – can finally be heard complete, for the first time, in the soprano part of the third Agnus Dei: a true culmination of the whole work.

The Missa La sol fa re mi was published in 1502, making it a relatively early work. Here Josquin seems to have been fascinated by what could be achieved with the most restricted kind of mathematical framework, though that was not unusual for him at that time as will be seen below. Virtually the whole Mass is derived from the single five-note phrase which the medieval notes la, sol, fa, re and mi yield in the modern scale: A, G, F, D and E. This motif may be heard in different note-lengths and occasionally in different pitches in one or other of the parts, though it is mostly to be found in the tenor. In all there are perhaps two hundred repetitions of this melodic idea, culminating this time in the first and third of the Agnus Dei settings where its note-lengths get shorter and shorter, intensifying the mood of other-worldly experience which the music has gradually built up.

Of the two motets which make up the remainder of the first disc, the Ave Maria comes closer to the sparse musical style of the Masses. This simple but enormously influential setting of one of the central texts of the Catholic faith is scored for four voices, but unlike the Masses does not adopt an argumentative musical idiom. Instead, much of the writing is for duets and trios, made up of spacious musical phrases and uncomplicated sequences. Here the culmination of the piece is not an intensifying of anything musical, but an exceptionally long-breathed final passage, made up of some of the least hurried chords imaginable (to the words ‘O Mater Dei, memento mei. Amen’ – ‘O Mother of God, remember me. Amen’). By contrast Praeter rerum seriem is a six-voice Christmas motet, of arresting sonorities and intricate musical detail. It is based around the melody of a devotional song. For much of the piece the polyphony is presented antiphonally between the three upper voices, when the song is in the first soprano, and the three lower voices, when it is in the tenor. The second half of the motet is less dependent on this melody than the first, becoming a more consistently six-part texture, eventually breaking into triple-time where the text makes reference to the mystery of the Trinity.

The two L’homme armé Masses of Josquin, which make up the second disc of this set, at first sight seem to be worlds apart: one might guess that Super voces musicales was a medieval composition and Sexti toni a mature Renaissance one. In fact the manuscript evidence suggests that they were roughly coeval; and they were published together by Petrucci in 1502 (in the same collection as the Missa La sol fa re mi). In choosing to paraphrase the popular L’homme armé melody, Josquin was contributing to a tradition which was already several decades old, which would continue for many more, and which would finally yield thirty-one settings by composers across the whole of Europe.

The title Super voces musicales indicates that the melody is quoted in turn on every note of the hexachord, almost always in the tenor part. The complications inherent in this are fascinating to follow. The ascent starts on C in the Kyrie, proceeds to D in the Gloria, to E in the Credo, F in the Sanctus (given again, complete, in both ‘Osannas’), G in the first Agnus Dei (incomplete) and A in the third (by which time it has at last become too high for the ‘tenors’ to sing and has been transferred to the top part). The only sections to be completely free of it are ‘Pleni sunt caeli’ in the Sanctus, the Benedictus and the second Agnus Dei, of which the two latter are mensuration canons for two and three voices respectively. The second Agnus Dei is made particularly complicated in that the top part is given the canon in triple time against the different duples of the two parts beneath it. The second halves of the Gloria and Credo (beginning at ‘Qui tollis’ and ‘Et incarnatus est’) are based on the melody in strict retrograde, with the Credo containing one more statement of the melody, the right way round, from ‘Confiteor’ in a syncopated rhythm. This kind of mathematical framework for a four-voice Mass is what calls medieval compositional practice to mind; such things were much rarer in the sixteenth century, and are not found in the same way in Josquin’s Sexti toni setting.

His Mass Sexti toni (‘in the sixth mode’) is so called because he has transposed the melody to make its final note F (as opposed to the more normal G), giving it a major-key tonality. Much of this music has a more relaxed air than the other Masses in this set, though en route Josquin can be heard trying out new speeds, new rhythms and new scorings for the tune, now complete, now with a few notes used as the basis for an ostinato pattern or a canon. However the wide overall range of the four voice-parts brings to the writing the kind of sonority which is associated with Palestrina and the High Renaissance, rather than the more cramped textures of Dufay and Ockeghem, and the general impression is one of a broader sweep. The only exception is the final Agnus Dei which not only adds two new voice-parts, making six in total, but adopts a compositional method which certainly harks back to the ‘medieval’ world of Super voces musicales. Taking an idea he used in that setting – of quoting the L’homme armé melody forwards and backwards in consecutive statements – Josquin here quotes it forwards and backwards at the same time. These statements form the lowest two parts of a six-voice texture, above which the upper voices revolve in two paired canons at the unison. This creates a sound-world all of its own – which since this recording was originally released in 1989 has been much discussed – reminding listeners not only of Josquin and the nascent sixteenth century but also of the methods of such modern minimalist composers as Philip Glass. It is a definition of super-stars that they are not only profoundly of their time, but through that profundity acquire a relevance for all time. In the last Agnus of his Missa Sexti toni Josquin proves that maxim gloriously.

Cover artwork: The Magdalen Reading by Rogier van der Weyden (1399-1464)
Reproduced by permission of The Trustees, The National Gallery, London