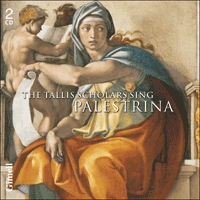 "Palestrina is probably the most talked-about composer in the history of classical music. Beethoven and Mozart are possible rivals in this, but with them the process hasn't been going on for so long. The Tallis Scholars have sung his music more than anybody else's, in the process winning a Gramophone Award for the first disc in this set." (Peter Phillips)

Palestrina is the composer The Tallis Scholars have sung and recorded most frequently. There need be no surprise in this: the quality of his music merits all the fame it has been accorded over the centuries, making him probably the most talked-about writer in the history of Western classical music (Beethoven, Mozart and Wagner are possible rivals in this, but with them the process hasn’t been going on for so long).

But there is more to Palestrina than his ability to write a masterpiece every time he sat down to compose: his style makes demands of its performers which no other composer quite made. We have come to realize that if a group can sing Palestrina well it can sing any choral music well, for in his music there is no hiding-place. The sonorities are so clear, the logic of the writing so compelling, that one sound out of place is immediately detectable; and a blemish is more serious in music which depends on sheer sound for its impact than in more pictorial or rhetorical compositional styles. With Lassus and Byrd, for example, interpretation through the words alone will go a long way to producing a convincing performance; Palestrina requires his performers to think more carefully about the sound itself. The nearest comparison is with the passage-work in Mozart’s piano music, which is equally so clearly and logically conceived that a stray note can acquire a disproportionate influence. Just as a pianist must rehearse scales and arpeggios to play Mozart well, so a vocal ensemble must work on blend and tuning to sing Palestrina well. There is no better or more rewarding way of learning how to sing Renaissance polyphony.

These two discs contain some of the best of our view of Palestrina, from the very first record we made commercially (in 1980), to one of the most recent (entitled ‘Lamenta’ and released in 1998). In general we have concentrated on his Mass settings – there are three more in our catalogue as well as another version of Papae Marcelli – not least because they make such effective concert music. Palestrina had an unusual ability to write positive, outward-going, major-key music which, over the length of a Mass-setting, is a great strength: penitential writing tends to be more effective in shorter bursts. Three of the four settings in this collection rely on bright sonorities; the fourth – Sicut lilium – is more subdued and sensuous, as the words of the motet require. The Lamentations, on the other hand, show a completely different side of Palestrina’s art. By dividing the text into short movements (and leaving out the Hebrew letters which are traditionally set as part of the whole) he was able to deliver a series of plangent statements worlds away from the mood of Papae Marcelli and Assumpta est Maria.

The Missa Assumpta est Maria, based on his own motet of that name which in turn is based on a short phrase of chant, is a classic example of sonorous Palestrina, its excitement achieved in large part by doubling the sopranos and tenors. The brighter sound this high-scored six-voice (SSATTB) choir produces is then emphasized in the style of the writing, which is more chordal than usual. The parody motet Assumpta est Maria shows the way in its opening bars: the three upper voices are grouped against the three lower ones in easily audible antiphony. This late-Renaissance method is then transferred to the Mass, most obviously in the Gloria and Credo but also in the first Kyrie, where greater elaboration was more customary. The sheer verve of this music has ensured that, along with Papae Marcelli, Assumpta est Maria has remained the most performed of all Palestrina’s 107 Mass-settings.

Sicut lilium by contrast is an early work, based on a motet which was published in the composer’s First Book of Motets in 1569. By contrast with the trumpet-like writing of Assumpta est Maria, the musical style here is more for string quartet, or viol consort: lucid, the working of the counterpoint at times very elaborate indeed. This can be heard at the beginning of the motet, where the point is treated to two complete expositions, from where it is transferred to the first Kyrie. Eventually all the movements except the Gloria open with imitative counterpoint. But underlying all this finely crafted polyphony is the perfumed atmosphere which the words of the motet (from the Song of Songs) originally inspired in Palestrina, and which, despite the long sentences of the Gloria and Creed, he managed to transfer to every corner of the Mass itself.

The second disc opens with a six-voice (SSATTB) set of Lamentations, originally the third lesson on the Saturday of Holy Week. Palestrina obviously felt drawn to the Book of Lamentations: he left nearly sixty individual verse-settings from it. Standardly each of these would begin with the initial Hebrew letter preserved in the Bible, but in this set they are missing. However the customary opening words are retained, as are the deeply emotive final ones: ‘Jerusalem, Jerusalem, turn to the Lord your God’. It seems that no matter how many times Palestrina set these words he found something new to say through them.

The Missa brevis (for four voices SATB), although relatively ‘short’ and straightforward in musical style, shows Palestrina’s idiom at its most accessible. It was a success from the start, being first published in 1570 and reprinted repeatedly up to 1620, since when there have been countless modern editions. Despite this, no one has been able to say what gave the music its starting-point. The most likely candidate is chant, rather than a polyphonic model as the other Masses in this set have; but if it was chant, the melodies are not applied very consistently. In fact the title ‘Brevis’ may indicate that there was no pre-existing material – rare in Palestrina’s Masses – this title filling in for the missing name of the original. The music is anyway not that short, being conceived in a fluent idiom which seems to glide effortlessly through the longer texts, until it culminates in the second Agnus. Here Palestrina abandoned any pretence at being straightforward and wrote a canonic movement which is a model of the form. The canon (a tune sung first by one voice and then by another some beats apart) is between the two soprano parts (a new one having been added to the ensemble just for this movement), making it as audible as anyone could wish. As with the best canons it seems as though it can never end.

The Missa Papae Marcelli also culminates in a canonic second Agnus, but here both the build-up and the canon itself are very different. This is the Mass which was said to have ‘saved church music’ by proving to the cardinals at the Council of Trent that words set to music could be audible even in polyphony. Dedicated to Pope Marcellus II, who had reigned for three weeks in 1555, it was probably written in 1556 and therefore dates from the years when that argument was raging. However it is hard to believe in this story entirely. Although the style of the music is syllabic at times, especially in the Gloria and Credo, it is not the case that the words are consistently more audible than in other settings of the period, something anyway made harder by using six voices (SATTBB) rather than four. Indeed the canonic second Agnus (now for seven voices SSAATBB) is one of the most complex movements of the High Renaissance, its mathematical density unequalled elsewhere in Palestrina’s output. What one can say, however, is that the setting as a whole is an unparalleled masterpiece, of the kind one returns to again and again over the years. The Tallis Scholars gave their first performance of it in March 1977 and their 75th in June 2004. I hope there will be countless more.