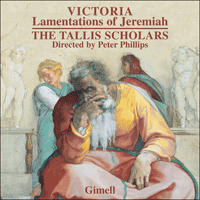 Cover artwork: Jeremiah the Prophet (from the ceiling of the Sistine Chapel) by Michelangelo Buonarroti (1475-1564)
Vatican Museum

Victoria's nine Lamentations contain some of his most intense, mystical and moving music and rank alongside the Requiem as one of his greatest achievements.

‘These Lamentations … attest to the marvellous sensibility of the group and to the durability of an inimitable vocal style’ (Classica, France)» More
‘These Lamentations are not only serious liturgical entities, but they are gorgeous choral works in their own right, and Peter Phillips has been doing this kind of repertoire longer than almost anyone around these days—he knows how to do 'gorgeous' and 'liturgically correct' both at the same time, and we have him and his superb singers to thank for much of today's serious focus on early and Renaissance choral music’ (Classics Today)» More

The Spanishness of Spanish polyphony is often invoked. There is an impression that in their worship the Spanish have a fierce­ness, coupled to a mysticism, which sets them apart. This way of thinking was current a long time ago: Michelangelo, when asked by the Florentine painter Pontormo how he could best please a Spanish patron, replied that he should ‘show much blood and nails’. Such rawness has readily been attributed to their music, too.

My experience is that only Victoria’s music has quite this special intensity of feeling to it, and then only in his six-voice Requiem and music for Holy Week. But it is this intensity, in the end, which makes him so distinctive, not only in the wider European context but also amongst his compatriots. Of all the great High Renaissance composers, Victoria’s writing can have the most immediately identifiable atmosphere. And in the purely Spanish context his greatest achievements cannot easily be confused with those of Lobo, Guerrero, Vivanco, de las Infantas, Esquivel, Navarro, even Morales, though the works of these men may be confused with each other. The question is how he achieved this unique atmosphere.

The irony is that Victoria, like Morales before him, spent many of his formative years (from 1565 to about 1587) in Rome studying the international style which the Flemish had brought there, and which Palestrina was in the process of bringing to new heights of perfection just at that time. In general his compositions from this period do not show anything very unusual – for example his wonder­fully sonorous six-voice motets often sound like very good Palestrina. The opening of his Vidi speciosam is so like the opening of the older master’s Tu es Petrus as to seem like a deliberate act of homage. They both set Dum complerentur in a similar idiom. Yet the story of the Lamentations is suggestive: they were finally published in 1585, right at the end of Victoria’s time in Rome; but there is an earlier manuscript copy of them in the Sistine Chapel Library (I-Rvat 186) which contains them in an earlier version. In this they are longer, less carefully organized harmonically, and less poignant in their setting of the texts. Before he allowed them to be published, Victoria had carefully revised every phrase. His ‘Spanish’ style was worked out in Rome.

The 1585 publication, known as the Officium Hebdomadae Sanctae, included all Victoria’s music for Holy Week: these nine Lamentations, the eighteen Responsories, two Passions and a number of other pieces. It is all of a plangent austerity which, when put alongside his six-voice Requiem of 1605, has long been held to represent Victoria and his Spanishness at its most typical and best. In fact it is only part of the story, since even when he had returned to Spain to become a priest (by 1587 at the latest) he wrote music in other idioms – including one of the most outward-going compositions of the period, the Missa Pro Victoria, based on battle noises – which was just as typical of him and perhaps Spain. But the style of the Holy Week music is particularly telling, almost defying analysis. For example much of it is not properly polyphonic. The underlying harmony is still as simple as it always was in sixteenth-century music, yet seems to have gained a new tension in the way Victoria used it. And the melodies that come from it are elemental, wrapped round the words, striding up and down with incredible purpose. There is not a note wasted – and yet this is still art music, not pared down for congregational use. Victoria had achieved his own match of function and expressivity.

Since the Holy Week services were the most dramatic and darkest in the Church’s year, Victoria’s expressivity was given full range. The nine Lamentations were composed for the first Nocturn at Matins on the Thursday, Friday and Saturday of this seminal week, three for each service. The famous Responsories (recorded by The Tallis Scholars on CDGIM 022) were written for the second and third Nocturns of each service. Each of these three services had three Nocturns in which three Lessons and three Responses were interwined. For some reason, possibly because there would simply have been too much music, Victoria set the Lessons (the Lamentations) for the first Nocturn and the Responses for the second and third Nocturns, but not both.

Victoria clearly intended his nine Laments to be heard as an overall musical experience which, however effective across three days of liturgy, makes them ideal for a recording. As they proceed the number of voices gradually increases, with the final ‘Jerusalem’ section always expanding the scoring, so that there is a crescendo not only within each Lament but within each set of three, and then over the nine. Most of the nine start with a four-voice section, normally leading to a five-voice ‘Jerusalem’. However the third Lament on both Thursday and Friday starts in five and ends in six; and the third Lament on Saturday starts in six and ends in eight. A feature of this process is that the amount of counterpoint does not increase, so Victoria’s chords simply become more monumental. By the time we reach the eight-voice section, which is partly for double choir, the effect is deeply impressive.

The ‘Jerusalems’ are a culmination of every section and sub-section, with the slightly unusual detail that in some of the Laments (but not all) Victoria has set these words twice, the second version scored for more voices than the first. Arguably they should not both be sung, but since there is no firm evidence as to why the composer provided two, we decided not to leave anything out. I also specifically asked the singers to produce a more forthright tone for the body of the text – where the prophet complains so bitterly about the fate of the holy city – as compared with the ‘Incipits’, the Hebrew letters and the ‘Jerusalems’ themselves.

Juan Gutiérrez de Padilla (c.1590–1664) is the best-known representative of the Spanish school of composers in Mexico. Born in Málaga, he was employed as a church musician firstly in Jerez de la Frontera and then in Cádiz before moving to New Spain no later than the autumn of 1622. On 11 October he was named cantor and assistant Maestro at Puebla Cathedral with an annual salary of 500 pesos, at a time when this Cathedral boasted a musical establishment on a par with the best in Europe. In 1629 Padilla became Maestro de Capilla, a post he retained until his death. His six-voice setting of the Lamentations is one of his finest achievements, employing an impassioned musical language which is spiced up with the augmented intervals beloved of every Iberian composer of note in the early seventeenth century, Portuguese as much as Spanish. The reduced-voice section at ‘Ghimel’, followed by the verse ‘Migravit Judas’, is a classic case of this. I have never elsewhere come across the astonishing harmonic move he makes at ‘inter gentes’. The fact that this set is scored for SSATTB points to the influence of Victoria and other Spaniards, who tended to favour this line-up in six parts. Victoria’s seminal setting of the Requiem is scored like this. Quite why it was thought appropriate to use such a potentially bright sound for Requiems and Laments is one of the many mysteries of the Spanish school.

Cover artwork: Jeremiah the Prophet (from the ceiling of the Sistine Chapel) by Michelangelo Buonarroti (1475-1564)
Vatican Museum