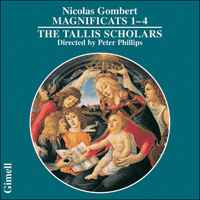 This is the first of two albums dedicated to Nicolas Gombert's 'swansong' and his most substantial masterpiece, the set of eight Magnificats, one on each of the eight Tones.

Of all the many masters of the Flemish Renaissance who are held to be of minor interest, Nicolas Gombert (c.1495–c.1560) least deserves it. Although his star has risen appreciably in the last ten years, there is a long way to go before his uniquely expressive style is properly recognized for what it was; and this will never be achieved without reference to his ‘swansong’ and most substantial masterpiece, the set of eight Magnificats, one on each of the eight Tones.

They form an anthology of everything he was capable of. Throughout his career he had developed an interest in dense textures. Very rarely resorting to chordal writing and preferring bass- and tenor-heavy textures, he had specialized in the kind of polyphony which makes a virtue of detail; and to pack in yet more of it he tended to use five or six voices where, in Josquin, four would have sufficed, sometimes fitting in lines where the outside observer would have sworn that to add anything further was impossible. With such a starting-point, it is a miracle of his art that he always managed to avoid a featureless muddiness. Indeed, the way the imitation works between the voices is as clear as it is resourceful and intensely argued, as tight as a bud which occasionally is allowed to blossom into fully fledged sequences and brief melodies.

What will surely strike the listener’s ear is the number of dissonances which Gombert wrote. In part these are the inevitable result of his habit of filling up the sonority. The polyphonic strands, more motivic than straightforwardly melodic, can seem deliberately to bump into each other, the range of expressive possibilities increased by his cavalier interpretation of the rules of normal part-writing. Particular examples of this are his delight in leaping from dissonant notes and not preparing suspensions properly; and yet he always moves his lines within narrow tessituras, in a restricted overall range, the top notes never very high, the low notes not low. One unexpected aspect of this technique is that the actual voice ranges are constantly shifting about: what is meant by ‘tenor’, for instance, is never stable. Another is the constant opportunity to deploy false relations, sometimes known as ‘English clashes’, by inflecting notes at cadences. There is a flourishing debate about how much the modern performer is entitled to do this, especially in Flemish music, but, being English, we have long had the chance to admire the expressive effects of these dissonances, and use them freely here.

There is some historical evidence (and a story worth retelling) to suggest that this set of Magnificats was indeed the summation of all that Gombert had striven for in his music. The source of it is a contemporary physician and polymath named Girolamo Cardano (1501–1576) who recounted that Gombert was at one point imprisoned in a galley on the orders of Charles V, after having been convicted of molesting a choirboy in his care, and secured his release by composing his ‘swansongs’ which so pleased the Emperor that he was pardoned and allowed to retire to a benefice. It is known that Gombert did retire to a benefice in Tournai, and the Magnificats (his last major works, and in a genre in which he had previously shown no interest) fit the designation ‘swansong’ very well, for all that it is a little hard to imagine why he should have turned his mind to such things when bobbing around on the ocean chained in a cabin. Previous to this imprisonment he had, in 1526, joined the chapel of Charles V as a singer, and by 1529 was the master of the choirboys of the Imperial Chapel. He is present in documents from 1526 to 1537 but is not present in a chapel list of 1540. In 1547 he describes himself as a canon of the Cathedral of Tournai, and he appears to have died before 1560.

All the Magnificats follow the same basic pattern: setting the even-numbered verses to polyphony and leaving the odd-numbered ones in chant. The early verses tend to be scored for four voices, increasing to five or more by the last one. Much of Gombert’s material is derived from the chant itself, as can be clearly heard in the points of imitation at the beginning of each setting. Furthermore, he faithfully retained the pitches of the cadences within the chant tones, using them in the polyphony both at the halfway point and at the end of each verse. (In his settings of Tones 3 and 6 he gives the performer two options, made possible by the fact that the contours of Tones 3 and 8 are similar, as are those of 6 and 1. In both cases he provides a setting of Tones 3 and 6, complete with final cadence in each verse and a sign to show that those tones end there. However, he then extends each setting to accommodate Tone 8 and 1 endings respectively, presumably for practical reasons for performance within the liturgy. In order to sing all of his polyphony we chose to record the extensions, and list the Magnificats accordingly.)

Each of the Magnificats has its own characteristics: Tone 1 introduces the listener to the essential method, beginning with the four standard voices SATB and eventually scoring up to five and then six, always doubling the lower parts, never the soprano and rarely the alto. As with some of the later settings, all the verses (except the three-part ‘Fecit potentiam’) begin with two melodies sounding together, one derived from the chant and the other apparently free – what is known as ‘double counterpoint’, a device much favoured by J S Bach in his fugues. The relationship between the various statements of these ideas, and how they combine, is unbelievably intricate. The intensity of this kind of writing is, however, regularly lightened by outward-going cadential flourishes, like the extended one into B flat at ‘et in saecula’ in the last verse.

Tone 2 again features four-part writing at the beginning, scoring down to three and then two parts in the middle verses, finally expanding to five in the last. Nowhere is the overall tessitura wide enough at written pitch to accommodate a soprano part (and the first tenor part is persistently a third higher than the second). Gombert’s ability to derive points and imitative schemes from the chant tone alone is crystal clear in this setting, and nowhere more so than in the two-part ‘Esurientes’. Only in the last two polyphonic verses does he turn to the relative complexities of double counterpoint again.

Tone 3 presents what might be called the ideal Gombert scheme for the Magnificat: beginning with three voices and then adding one with each new verse, ending up, five verses later, with eight. The effect of these additions, while working the same basic (chant-based) material, is to state that material in an ever-denser context: a kind of aural perspective which opens out before your ears, the music acquiring extra dimensions as the same ideas are deepened and intensified. Gombert keeps the opening point unaltered until he reaches the seven-voice ‘Sicut locutus est’, when it goes into long notes, first in the top part and then in one or other of the tenors. The last verse employs four of the eight voices in two separate canons, one of them (between a soprano and a tenor) reverting to the chant-based point of the earlier verses. From the third verse (in five parts) onwards this Magnificat provides some of the most exhilarating polyphony of the mid-sixteenth century.

Tone 4, like Tones 2 and 5, is essentially a four-part setting – without a soprano part but including two unequal tenors. It is probably the strictest of all the settings in deriving its material from the chant, the extra bass part in the last verse (now in six parts) providing a further resonant example of aural perspective. Just when the listener might conclude he has heard all that can possibly be done with the basic material, Gombert underpins the texure with yet another entry, lower in pitch than anything stated previously. There is little else in the period to rival the intensity of this technique, which Gombert revisits even more memorably in the last verse of Tone 8.

In order to establish the modality of the different chant tones, we have provided a set of Magnificat antiphons. In the liturgy these would traditionally have been sung before the Magnificat and repeated after it. We have preserved that sequence here.