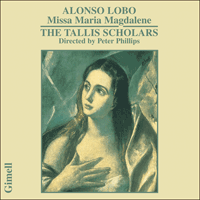 Alonso Lobo is perhaps best known now for his consummate motet Versa est in luctum though in his lifetime he was respected as the equal of the great Victoria himself. This album includes all seven of Lobo's motets as published in 1602 and one of his finest Masses from the same book.

‘The Tallis Scholars are on superb form, the overall sound vibrant and immediate with solo sections (such as the Benedictus) providing contrast through a more introspective approach. Even if you've never heard of Lobo, or have never bought a CD of late-Renaissance polyphony before, try this one—you'll be bowled over’ (Gramophone)

The Spanish school of Renaissance composers, eventually to become one of the most splendid in Europe, was something of a late developer. Although there were significant figures working in Spain in the first half of the sixteenth century, it was really only with the ebbing of the tide of Franco-Flemish musicians at court that the astonishing depth of talent being trained in the local choir schools came to the fore. Amongst the most impressive of these men were Francisco Guerrero (1528–1599) and Alonso Lobo (1555–1617), almost certainly master and pupil. Lobo, who should not be confused with his Portuguese namesake and near-contemporary Duarte Lôbo, is perhaps best known now for his consummate motet Versa est in luctum, recorded here, though in his lifetime he was respected as the equal of the great Victoria himself. This disc includes all seven of Lobo’s motets as published in 1602 and one of his finest Masses from the same book (Liber primus missarum).

Lobo’s connection with Guerrero was entirely sustained at Seville Cathedral, where originally Lobo was a choirboy and Guerrero maestro de capilla. Presumably Guerrero taught him. It would have been natural for Lobo to go to school in Seville, since he was born (as recent evidence has shown) on 25 February 1555 in the nearby town of Osuna. In fact, after taking a degree at Osuna University and becoming a canon at the collegiate church there, he returned to Seville Cathedral in August 1591 to help the ageing Guerrero. Such was his reputation by then that the chapter gave him the post without the usual formal tests of musicianship. In 1593 Lobo went to be maestro at Toledo Cathedral; however, in 1604 he returned to Seville, where he remained until his death.

Lobo’s musical language is detectably of a later generation than that of Victoria, even though he was only seven years younger. The difference between them was probably the training Victoria received in Rome, where he studied Palestrina’s compositional method, learning how to control long spans of music without relying on constant changes of texture and harmonic speed. The rhapsodic calmness of this style has led many commentators to attribute an intensity and mysticism to Victoria’s music which is equated with the essence of Spanish Catholicism. In fact Lobo also had a style which it is possible to say was typically Spanish, since the compositions of several of his contemporaries, including Vivanco and Esquivel, resembled his; yet it relies on different ingredients. Beauty of contra­puntal line is certainly there (Versa est in luctum is pre-eminent in this respect), but sometimes, where expressiveness seems to require it, it is coupled to quite angular lines. And the relative lack of Palestrinian smoothness carries through to the separate sections in Lobo’s music, which are often built on contrast, fast then slow, not usually to paint the superficial meaning of each word but rather to induce in the listener’s mind the conflicting emotions behind them. Lobo’s style was never purely madrigalian, but a halfway point between it and the calm order of strictly imitative counterpoint.

Lobo repeatedly paid musical homage to Guerrero: of his six published Mass-settings (1602), no fewer than five use motets by the older master as their models – Maria Magdalene, Beata Dei genitrix, Prudentes virgines, Petre ego pro te rogavi and Simile est regnum caelorum. The sixth Mass, O Rex gloriae, is based on a motet by Palestrina. Guerrero’s style, as shown in the motet which opens this disc, is more stately, more sonorous than Lobo’s. His textures seem constantly to glow from the expert spacing of the chords, while his control over the section which runs to the words ‘Iesum quem quaeritis Nazarenum, crucifixum: surrexit’ is as masterly as anything in the mid-century European repertory, sustained yet intensely dramatic, unexpected counterpoints and harmonies all making their contribution.

Under the influence of this model Lobo’s Mass is, at times, just as purely sonorous. Every major section begins with the opening notes of the Guerrero (in the Sanctus, in double counterpoint; in the Agnus, in stretto) which immediately establish a mood of unhurried grandeur. Rarely did Lobo feel inclined to break this up, and even in sub-sections which do not initially refer to the Guerrero the textures are spacious, as in the ‘Christe’. The main exceptions are the second ‘Kyrie’ and the ‘Hosanna’, which come closer to some of the sections in his motets – the phrases shorter, the texture lighter and the ‘Hosanna’, in particular, relying on cross-rhythms.

The seven motets published in 1602 (in manuscript there are many more) were seen through the press by Lobo himself. This print was uncommonly successful – copies of it are still to be found in such important centres as the Sistine Chapel in Rome and Coimbra in Portugal. Furthermore there are five extant copies in Mexico, suggesting that Lobo was a seminal figure in the development of compositional style in the New World.

The motets were published after the Masses and appear under the general title of Moteta ex devotione inter missarum solemnia decantanda, in other words they are devotional works which may be sung during solemn Masses extra-liturgically. We present them here in the order in which they were published, though, as the title says, there is no particular reason for doing so. In fact they make a satisfying sequence, beginning with the two six-voice motets, scoring down in the middle ones, finally to culminate in the only eight-part composition, Ave Maria, which outshines the others as a technical tour de force.

The two six-part motets which open the set – O quam suavis est, Domine and Quam pulchri sunt gressus tui – both begin with through-composed polyphony in an almost rhapsodic vein before the texture quite abruptly breaks up to describe a contrasting mood in the words (quite madrigalian in the latter, at ‘ideo gaudentes’, more generalized in the former at ‘esurientes reples bonis’). O quam suavis est, Domine was written for Corpus Christi; Quam pulchri sunt gressus tui has a more obscure genesis which seems to celebrate the legend of the Blessed Virgin Mary visiting Toledo Cathedral in ad666, when she appeared to Bishop St Ildefonso. At any rate the text is unique: the first sentence comes from the Song of Songs, the second from the Feast of the Descent as it was presented locally in Toledo up to the end of the nineteenth century.

The five-part Ave regina caelorum, with its strict canon between the two soprano parts (eight beats apart), pays homage again to a work by Guerrero, in this case his motet Ave virgo sanctissima which deploys the same canon. It was intended for the service of Compline between Christmas and the Purification. The six-part Versa est in luctum has a text associated with the liturgy of the Requiem Mass, though Lobo is not known to have set the Requiem complete. In the 1602 print he described it as having been written for a memorial service in honour of Philip II of Spain, which was held some time in September or October 1598. Lobo followed the fluctuating mood of the text with exquisite sensitivity.

Credo quod redemptor and Vivo ego, dicit Dominus, both for four voices, respectively have funeral and Lenten references. The former is taken from the service of Matins of the Dead; the latter is a more general text. Vivo ego, dicit Dominus, having maintained an appropriately contemplative mood throughout, suddenly breaks free in the final bars to depict the words ‘et vivat’. Lobo’s Ave Maria is a masterpiece of a rather different kind, being based on a complex canon 8 in 4 at the upper fifth. Although the eight voices are divided into two choirs and the bottom part of each choir sings the same music, the other three voices are rearranged: the top part of the choir which begins becomes the third part in the choir which responds, the second part of choir I becomes the top part of choir II, and the third part of choir I becomes the second part of choir II. Yet despite the mathematical intricacies the resulting music seems artlessly serene, as befits the text. It culminates in the most perfect ‘Amen’, where the beauty inherent in these canons is particularly telling.