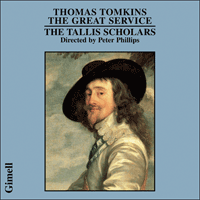 A pupil of William Byrd, Thomas Tomkins' technique as a contrapuntalist was second to none, as can be heard in the Great Service or the anthem O God, the proud are risen against me. In this respect alone he was the composer who most obviously continued Byrd's achievement.

‘Anyone familiar with the work of The Tallis Scholars will know exactly what mastery they are capable of as well. Here, as usual, they offer perfect intonation and a clear, incisive texture, resulting in a sound of stunning, unequivocal beauty. The group ranging in size from 10 to 16 singers, delivers an impressive range of dynamics … if you can perform with the sheer expertise and refinement of The Tallis Scholars, there's really little you can do wrong. This disc is eloquent proof of that’ (Gramophone)

Thomas Tomkins (1572–1656), who died thirteen years after Monteverdi, was an early example of that well-known phenomenon which has characterized the careers of some of the greatest British composers. They all made a significant contribution to the music of their time, but did so in a style which, when they came to take it up, had been thoroughly explored and discarded elsewhere in Europe. In fact, a glance at Tomkins’ date of birth will show that he was of the same generation as Thomas Weelkes (c.1576–1623) and Orlando Gibbons (1583–1625), a generation which produced an astonishing number of talented composers, all of whom adhered to the principles of Renaissance polyphonic composition. Many of them, including Tomkins, were pupils of William Byrd (1543–1623); most of them, again like Tomkins, wrote sacred music only to English texts, for the new Anglican church.

Tomkins, however, was exceptional in a number of ways (much of the material which follows is taken from chapters 4 and 8 of Peter Phillips’ book English Sacred Music 1549–1649, Gimell, Oxford, 1991). His technique as a contrapuntalist was second to none, as can be heard in the Great Service or the anthem O God, the proud are risen against me, and in this respect alone he was the composer who most obviously continued Byrd’s achievement. He also had the same breadth of ability as Byrd, composing not only sacred music but madrigals, canzonets, viol consort music and some of the greatest keyboard music of the English Virginal School. In addition, by living so long, he had the opportunity to update the traditional Anglican style in ways which historians rarely comment upon, but of which this recording gives good evidence. In every piece he can be heard maintaining his own easy balance between madrigalian methods of composition and the older cathedral style. At times his music is forward-looking: the final section of Almighty God, the fountain of all wisdom, with its partial use of the whole-tone scale, is a remarkable conception. Although it retains a polyphonic idiom, its daring comes from the underlying harmonic language, which foreshadows the compositional method of Henry Purcell (1659–1695). If it had not been for the Commonwealth period in English history, which lasted from 1649 to 1660 and led to the suppression of the Anglican Church and all the musicians employed by it, I believe Tomkins would now be seen as ‘father’ to a generation of composers who would have bridged the stylistic gap between himself and the post-Restoration school of Purcell and others. As it is, with this intermediary generation missing, it is all too easy to see Tomkins as the last survivor of the old ways, and Purcell as the brilliant innovator starting from scratch.

Tomkins was also exceptional in that almost all his church music was published. This process was supervised by his son, Nathaniel, and resulted in a collection called Musica Deo Sacra which appeared in 1668. This publication has led to the survival to the present time of an unusual amount of music: over a hundred anthems and five services, for more than half of which Musica Deo Sacra is the unique source. All of Tomkins’ anthems and services were written either for Worcester Cathedral, where he was organist from 1596 possibly until 1654, or for the Chapel Royal, where he was technically organist from 1621 until his death. It is virtually impossible to put a date on any of these compositions, though the majority was probably written by the early years of Charles I’s reign. Since Tomkins is known by more sacred music than any other English composer of the sixteenth or seventeenth centuries, the items on this recording represent but the tip of an iceberg.

Tomkins’ Third or Great Service, scored for SSAAAATTBB, is arguably the ‘greatest’ of the handful of polyphonic Great Services. It was heavily influenced by Byrd’s own Great Service, as can be heard in the similarity of scorings at the beginning of the Magnificat and Nunc dimittis, and the development of related points to the same words (most notably at ‘he hath scattered the proud’ – Track 3). Tomkins was clearly trying to emulate his master; but he excelled Byrd in the most original aspect of the Great style: vocal scorings. Although large-scale full anthems, like O sing unto the Lord a new song, could be said to rival the elaboration of Great Service counterpoint, there is no equivalent to the constant shifting of timbre and sonority which can be heard in these canticles. Nowhere in an anthem, for example, could one expect to find a section scored for AAAATTBB as occurs at ‘When thou tookest upon thee’ (Track 1) in Tomkins’ Te Deum. These canticles represent the last word in the English search for elaborate sonorities, and in the process Tomkins created some of the most challenging music which modern choirs can undertake.

At several points in these canticles Tomkins’ predilection for madrigalian textures is apparent: at the beginning of the Jubilate the words ‘joyful’ and ‘gladness’ have obviously inspired his writing. The ease with which he moved from carefully argued counterpoint to a lighter manner distinguishes all his music, setting him apart from Byrd and Gibbons in particular, who liked to keep sacred and profane separate. Two of the anthems on this recording, When David heard and Woe is me, both published in an anthology of secular Songs which came out in 1622, were probably intended to be sacred madrigals, a kind of half-way style which suited Tomkins well. It is unclear, not least because of the mixture of musical styles, whether they were originally designed to be sung in church by a choir or at home by soloists. We have chosen the choral approach, which, at least in the case of When David heard, has been the most common one.

When David heard and Then David mourned were probably not conceived as a pair: the latter was not published in the 1622 Songs and is anyway scored differently (SSATB) from its more famous partner, which is for SAATB. When David heard has long been recognized as one of the supreme examples of late-Renaissance composition, a highly expressive blend of polyphony and more harmonic writing, of dissonance leading to consonance as David seems at last to come to accept the reality of his position. By contrast, Then David mourned has an almost nonsensical text, since it is clearly incomplete, while the music itself relies on violent tonal shifts which take it from a chord of A flat to one of D in seven bars. The two anthems show two ways of writing a lament: the one protracted, following the slowly developing state of mind of the protagonist, the other abrupt and stark, presenting a single image with maximum force. Almighty God, the fountain of all wisdom, the other five-part (SAATB) anthem included here, is more traditionally Anglican. A Collect set for the most part in sober style, Tomkins gave no prior warning of the extraordinary intensification of his musical language in the final bars. Although the false relations at ‘of thy Son, Jesus Christ our Lord’ may be familiar from other works, the ‘Amen’ is at once original without seeming experimental.

The six-part Woe is me (SSATBB) is a fine example of the mixture of old and new methods – biting dissonances, short motifs, some changes of metre on the one hand, sustained lines and thorough contrapuntal working (especially of the last point) on the other. Of the two seven-part pieces (both SSAATBB), Be strong and of a good courage is the more backward-looking, a solid wall of sonority written for James I’s coronation in 1603. O sing unto the Lord a new song, by contrast, is made up of constantly changing sonorities which through syncopation propel the music towards its remarkable ‘Alleluia’. Tomkins’ only eight-part anthem, O God, the proud are risen against me, is a similar tour de force, encompassing both weighty eight-part polyphony in the opening point and the most beautiful word-painting at ‘slow to anger’. On the evidence of this piece alone Tomkins deserves to be placed alongside Byrd and Purcell.