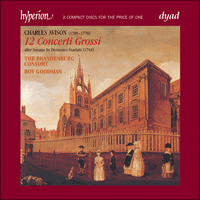 ‘A delightful set … Roy Goodman seems to have made an affectionate study of these works and the results are enchanting. If you are a lover of baroque concerti grossi do not fail to listen to these heartwarming records’ (Classic CD)
‘The music is delightful, the performances scintillating, and the sound excellent. Warmly recommended’ (Fanfare, USA)

By the 1740s the concerto grosso had become a peculiarly English type of orchestral music. It was originally devised by Alessandro Stradella and Arcangelo Corelli in Rome in the 1670s and ’80s as a type of polychoral music suitable for spatially separated galleries in churches, or sometimes carts or platforms in outdoor secular entertainments, but by the second decade of the eighteenth century, when Corelli’s Op 6 Concertos were published, it had been modified to serve a different purpose. The concertino of two violins, cello and continuo, instead of being separated from the concerto grosso or string orchestra, was now taken by the leaders of the respective sections. At this point, the concerto grosso was largely abandoned in Italy in favour of the newer and more virtuosic three-movement solo concerto, but its career was only just beginning north of the Alps. In England, in particular, the ‘grand concerto’ (as it was often known in English) was the main type of orchestral music far into the century; native composers were still writing examples in the 1770s and ’80s, long after J C Bach, C F Abel and the Earl of Kelly had popularized the German classical symphony in London.

At first, grand concertos were written mainly for London’s theatres and professional concerts. This was the original purpose of Geminiani’s two influential sets, Opp 2 and 3 (1732), and Handel’s Op 3 (1734) and Op 6 (1740), as well as the earlier collections by native composers, such as John Stanley’s Op 2 (1742). However, before long provincial composers began to take up the genre, and for them the main motive was to provide repertory for the amateur orchestral societies that were springing up in every sizeable English town at the time. The grand concerto was the ideal vehicle for these groups: the difficult concertino parts were played by hired hands, while the easy ripieno parts could easily be taken by their employers, the gentleman amateurs. Such was the rage for grand concertos in mid-century England that demand soon exceeded supply, and composers and publishers began to cash in with a series of arrangements. Geminiani published concerto versions of Corelli’s solo sonatas and trio sonatas, while his friend Francesco Barsanti added arrangements of Geminiani’s Op 1 sonatas and trio sonatas by Giuseppe and Giovanni Battista Sammartini to the repertory. We now know that Handel’s concertos are largely arrangements of orchestral music drawn from existing vocal works, while Benjamin Cooke even cobbled together a spurious set of concertos by Alessandro Scarlatti from disparate sources, including some chamber sonatas.

Charles Avison is a crucial figure in these developments. He was born the son of a town musician in Newcastle upon Tyne in February 1709, and, apart from a brief period in London in the early 1730s, remained there for the whole of his career. In 1735 he was appointed organist of St John’s Church, and in the next year he also acquired the post at St Nicholas, now the cathedral (illustrated on the front of this booklet). At the same time he was involved in organizing a series of subscription concerts and was appointed director of them in 1738; it was for this organization that Avison presumably wrote most of his orchestral music. In later life he extended his activities to local theatres and pleasures gardens, and to Durham where he collaborated in a series of concerts with the composer John Garth. He died in Newcastle in May 1770.

Avison was one of the most prolific and accomplished provincial composers of grand concertos. His first set, Op 2, was published in 1740, and was followed by a pair of concertos published separately two years later—one of which seems to be the earliest solo keyboard concerto to be published by a native Englishman. The subject of this recording, the Twelve Concerto’s in Seven Parts … Done from Two Books of Lessons for the Harpsicord Composed by Sig. Domenico Scarlatti, was published by Avison himself in 1744, though he had tested the water a year earlier with an early version of the sixth concerto. In this publication, I Concerto in Seven Parts Done from the Lessons of Sigr Scarlatti, he announced that he would publish the complete set if he received 100 subscriptions; in the event, there were 151 subscribers.

The prototype concerto, two fast movements in D major, evidently attracted criticism, for Avison added a ‘PS’ dated 23 May 1743 to a reprint, in which he admitted that ‘this Undertaking would have been liable to Exceptions from a Want of slow Movements in the Original’, but announced that he had ‘been favour’d (since the printing of this Specimen) with as many Pieces of the same Author’s as will be an Addition, in general, of two to each Concerto’, which enabled him to make up concertos in the traditional slow-fast-slow-fast pattern. The printed source Avison had access to, XLII Suites de pièces pour le clavecin published by Thomas Roseingrave in 1739, contains only two slow movements. Some of the others came from manuscript copies acquired at ‘extraordinary expence’, while others were adaptations, made by turning fast movements into slow. Twelve of the fifty movements cannot be found in Scarlatti’s surviving works, and may have been composed by Avison himself.

Avison was up-to-the-minute in publishing a collection of arrangements of Domenico Scarlatti. Scarlatti had been a friend and colleague of the Irish organist Thomas Roseingrave in Rome and Naples around 1710, and seems to have come to London in 1720 to supervise the production of his opera Narciso, assisted by Roseingrave. Roseingrave’s 1739 edition of Scarlatti made the Italian’s harpsichord music fashionable in England, and in the 1740s and ’50s a Scarlatti cult developed, based on Roseingrave, his pupil John Worgan, the composer Joseph Kelway, and his patron Lord Fitzwilliam. In the words of Charles Burney: ‘The Lessons of M. Scarlatti were in a style so new and brilliant, that no great or promising player acquired notice of the public so effectually by the performance of any other music. Kelway kept them in constant practice; Worgan played no other music, except his own. In short, everyone played, or tried to play, Scarlatti’s’. Burney is said to have made his own concerto arrangements of Scarlatti, drawing on movements not used by Avison, and Handel, the century’s most incorrigible borrower, also drew on Scarlatti in several of the specially composed movements in the Op 6 concertos. Domenico Scarlatti even figures in Tristram Shandy: a father is described as ‘like the sixth of Avison Scarlatti—con furia!’

Avison did not confine himself to translating Scarlatti’s keyboard writing into orchestral terms. He wrote in the introduction to the prototype concerto that the sonatas ‘being extremely difficult, and many delightful Passages entirely disguised, either with capricious Divisions, or an unnecessary Repetition in many Places, few Performers are able to execute them with that Taste and Correctness they require’, so ‘forming them into Parts, and taking off the Mask which concealed their natural Beauty and Excellency, will not only more effectually express that pleasing Air, and sweet Succession of Harmony, so peculiar to the Compositions of this Author, but render them more easy to the Instrument for which they were first intended’. For this reason, Avison frequently made sizeable cuts, particularly in those fast movements that were converted to serve as slow movements, and in those passages with a large number of repeats. Incidentally, Malcolm Boyd has pointed out that Avison did not usually mark the repeated phrases he retained with changes from ripieno to concertino, or even with dynamic marks, which suggests that echo effects played a smaller role in the interpretation of the period than we tend to think. The other changes Avison made to the sonatas were evidently designed to take off ‘the Mask which concealed their natural Beauty and Excellency’: ‘capricious Divisions’ were sometimes rewritten, Scarlatti’s harmony was occasionally changed, and extra contrapuntal lines were added. The result was something unique, half Spanish exuberance and half English sobriety—music that, in Avison’s words, ‘will be found to contain a Collection of the most genteel and lively Pieces’.