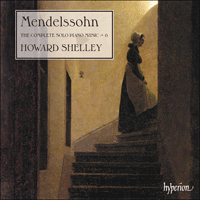 Howard Shelley’s survey of the piano music is an undoubted highlight of the Mendelssohn revival. In this, the final instalment of the series, he focuses on late works and posthumous publications.

One of the very great pianists of the nineteenth century, Felix Mendelssohn Bartholdy (1809-1847) achieved legendary status for his performances and improvisations alike, though his piano compositions generally have not withstood comparison with the very best keyboard music of the century. The one piano sonata he published was deemed not to have broken new ground after Beethoven’s path-breaking thirty-two; he created no large-scale cyclic works comparable to Robert Schumann’s hybrid literary/musical fantasies for the instrument; his meticulously crafted Lieder ohne Worte exuded for many a refined romanticism not as soul-searching as the miniatures of Chopin or Brahms; and nowhere did his technical demands on the pianist challenge the Promethean exertions of Liszt.

But such views of Mendelssohn’s piano music largely mirrored the conventional wisdom about the composer’s stature engrained over much of the twentieth century. A complex of factors, including a reaction against Victorianism (a frequent visitor to England, Mendelssohn had enjoyed audiences with the Queen, had been embraced as a Victorian gentleman, and was an easy mark for later critiques of the period) and the banning of his music by the Nazis (though a baptized Lutheran, Mendelssohn was the grandson of the Jewish philosopher Moses Mendelssohn), combined to undermine his reputation. And so he was remembered as a purveyor of comfortable (gemütlich) salon music; his affinity for complex Bachian counterpoint led him to rely too much on historical models; and his music betrayed a cloying sentimentality utterly at odds with modernist tastes. Writing in The Musical Times on the sesquicentenary of the composer’s birth in 1959, Stanley Bayliss conceded that Mendelssohn’s music offered ‘magic, charm, clarity, brilliance, verve, lilt, [and] polish’—but all these qualities were not enough to offset this terse verdict of post-War culture: ‘Mendelssohn does not go very deep.’

These attitudes contrasted dramatically with the composer’s meteoric rise to fame during the 1830s and 1840s, and his rapid canonization. An extraordinary child prodigy, he was compared by Goethe and Heine to a second Mozart, and described by Robert Schumann as the Mozart of the nineteenth century. As a composer, he made significant contributions to every important genre of the time, with the exception of opera (though not for want of trying—he reviewed scores of potential libretti, only to settle late in life on Die Lorelei, left unfinished at his death). As a conductor, he turned the Gewandhaus Orchestra in Leipzig into one of the premier musical institutions of his time. As a tireless editor and performer of Bach and Handel, he argued for continuities in the European classical tradition, in which he found again and again the wellspring of his own inspiration. And as a pianist, his elegant style of playing found favour with many critics, including his early biographer W A Lampadius. ‘Mendelssohn’s skill as a virtuoso was no mere legerdemain’, Lampadius wrote in 1865, ‘no enormous finger facility, that only aims to dazzle by trills, chromatic runs, and octave passages; it was that true, manly virtus from which the word virtuoso is derived; that steadfast energy which overcomes all mechanical hindrances, not to produce musical noise, but music, and not satisfied with anything short of exhibiting the very spirit of productions written in every age of musical art. The characteristic features of his playing were a very elastic touch, a wonderful trill, elegance, roundness, firmness, perfect articulation, strength, and tenderness, each in its needed place. His chief excellence lay, as Goethe said, in his giving every piece, from the Bach epoch down, its own distinctive character.’

Today, in the midst of a full-scale Mendelssohn revival, Howard Shelley’s survey of the complete solo piano music in six volumes offers a welcome opportunity to revisit and reassess this repertoire. As we now know, Mendelssohn composed or began nearly two hundred works for piano. Nevertheless, he saw only about seventy through the press, released in seventeen opera from the Capriccio, Op 5 (1825), to the sixth volume of the Lieder ohne Worte, Op 67 (1845). Some twenty-five additional pieces appeared posthumously in eleven additional opera. The remainder, whether fully drafted or fragmentary, were left to his musical estate or have disappeared.

As a composer of piano music, Mendelssohn is primarily remembered for creating the Lied ohne Worte, a new type of short character-piece for piano that Robert Schumann described as a ‘song’ with its text suppressed and vocal line transferred to the keyboard, so that the verbal imagery of the poem was magically subsumed in the purely musical, abstract gestures and figurations of the piano. From 1828 onwards, Mendelssohn continuously produced Lieder ohne Worte, generally by first writing and distributing individual examples as small gifts recorded in the albums of his friends. Then, through a process of revising, polishing and culling, he assembled and released them in groups of six, sometimes in tandem with a parallel opus of Lieder mit Worten, as in his Opp 19a (for voice and piano) and 19b (solo piano). A good example of the process is the early version of Op 19b No 2 in A minor, originally written in 1830 for his younger sister, Rebecka. Titled simply Lied, the autograph—formerly in the possession of Vladimir Horowitz, but now in the Yale Music Library—reveals a composition considerably different from the familiar version released in print in 1832. To be sure, the early version begins the same way, in a pensive A minor andante, but some fifty bars into the piece reaches a pause on an imperfect cadence. What follows are twenty bars of an affirming allegro con moto in A major, an unexpected extension that considerably brightens the mood of the music. Nevertheless, Mendelssohn thought better of this Moll-Dur coupling, removed the allegro completely, and reworked the andante to form a self-sufficient whole.

Between 1832 and 1845, when he released Opp 19b and 67, the composer published no fewer than thirty-six Lieder ohne Worte in six books; twelve Lieder in two additional volumes appeared posthumously. The first six of the eight books have already been recorded on the first five instalments of Howard Shelley’s Mendelssohn project. The present recording includes the posthumous seventh and eighth books, comprising the twelve Lieder ohne Worte, Op 85, which appeared in 1850, after Mendelssohn’s death, and Op 102, which followed in 1868.

While Mendelssohn did not live to determine the contents for either Op 85 or Op 102, he did prepare in 1846, the penultimate year of his life, a manuscript titled ‘Sechs Lieder ohne Worte’ for a Dresden arts patron, Ida von Lüttichau (Stanford University, Memorial Library of Music). Five of the pieces were drawn from what eventually appeared as Op 85 Nos 1-3 and 5 and Op 102 No 2, affording us at least some idea of his intentions for the next volume of Lieder ohne Worte. The remaining piece, the programmatic Reiterlied (‘Riders’ song’), recorded here and one of the few piano Lieder for which Mendelssohn provided a title, features a din of canonic writing between the treble and bass registers. In the end, though, it was the Bonn firm of Simrock, publisher of the first five Hefte of Lieder, that selected the pieces for Opp 85 and 102, and the Reiterlied was not among them. They included several examples of the solo Lied variety, with ‘singing’ treble melodies accompanied by various types of arpeggiated or chordal figures divided between the hands. Two exceptions were Op 102 No 2, which with its treble melody doubled in thirds suggests a Duett ohne Worte, and Op 85 No 5, featuring homophonic textures that bring to mind a choral partsong. Fully ten of the twelve pieces are untitled, though two, the fleet-footed Op 102 Nos 3 and 5, bear the heading Kinderstück (‘children’s piece’), and thus fall in the tradition of other juvenescent compositions such as Robert Schumann’s Klavieralbum für die Jugend and Bizet’s Jeux d’enfants. One other Lied, Op 102 No 1 in E minor, is noteworthy for another reason: Mendelssohn borrowed a phrase from its thematic material and re-used it, transposed to C minor, in the first movement of his Piano Trio No 2 in C minor (1845).

Completing this final instalment of Hyperion’s Mendelssohn cycle are two short pieces published in 1833 as the Musical sketches Nos 1 and 2; two works from 1837 issued posthumously as the Albumblatt in E minor, Op 117, and Capriccio in E major, Op 118; the Prelude and Fugue in E minor; and two more substantial offerings from 1826 and 1827—the Perpetuum mobile in C major, Op 119, and Piano Sonata in B flat major, Op 106, also published posthumously. If the Musical sketches pair an unrelated, lyrical andante in B flat major and turbulent presto in G minor, the Capriccio elides an introductory andante in E major with a full allegro movement in the minor. The Albumblatt, on the other hand, presents a different arrangement: a ternary ABA form in which the outer agitated sections in the minor are offset by a singing middle portion in the major.

The free-standing Prelude and Fugue in E minor combines an early fugue from 1827 with a prelude Mendelssohn composed in 1841, recalling a similar coupling in the case of the Prelude and Fugue in E minor, Op 35 No 1. In both preludes Mendelssohn took the opportunity to experiment with the so-called ‘three-hand effect’, in which he embedded a melody in the middle register of the piano and framed it with arpeggiations above and a bass line below. The effect was that three, instead of two, hands were playing, a virtuosic trompe l’œil made fashionable in the 1830s by Sigismond Thalberg, and then widely imitated by other virtuosi, including Liszt. In contrast, the fugue, built upon an angular subject launched by the dramatic leap of a falling seventh, impresses as another example of Mendelssohn’s Bachian pursuits, so that, taken together, the prelude and fugue juxtapose the new with the old.

Written for the virtuoso and later intimate friend of Mendelssohn, Ignaz Moscheles, the Perpetuum mobile unwinds as a breathlessly brisk scherzo, 210 bars in length, with an uninterrupted stream of semiquavers for the right hand (some 1,600 in all)—Mendelssohn’s playful attempt to contrive a musical answer to the centuries-old quest for a perpetual-motion machine. But the piece is also a thinly disguised homage to another virtuoso, Carl Maria von Weber, the finale of whose Piano Sonata No 1 in C major, Op 24 (1812), clearly provided a model for Mendelssohn. In the case of the Piano Sonata, Op 106, Mendelssohn’s inspiration was no less than Beethoven’s mighty ‘Hammerklavier’ sonata (1819). These two works share B flat major as their tonic key, and the same opus number, though the latter alignment was likely pure coincidence, as Mendelssohn did not see his own Op 106 through the press. The boisterous opening of its first movement clearly nods to the ‘Hammerklavier’, as does the placement of the second theme in the submediant G major. In addition, Mendelssohn’s second movement, like Beethoven’s, offers a scherzo in 2/4. While Beethoven placed his ineluctably poignant third, slow movement in the enharmonic key of F sharp minor, Mendelssohn turned to E major, the key most distantly related to B flat major, for a Lied ohne Worte-like movement. Then, as with Beethoven, he provided a transition leading to the finale, which returns us to the home key. But unlike Beethoven’s cerebral culminating fugue con alcune licenze, Mendelssohn elected instead to conclude with a scintillating movement once again in the style of Weber. In the end, instead of cerebral counterpoint, effervescent virtuosity prevails in this exuberant work of the eighteen-year-old composer.

R Larry Todd © 2022
author of Mendelssohn: A Life in Music, Fanny Hensel: The Other Mendelssohn and, with Marc Moskovitz, Beethovenâs Cello: Five Revolutionary Sonatas and Their World