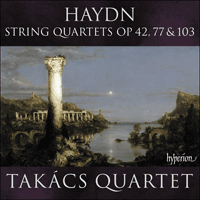 ‘Does it need saying that they’re awfully good?’ was The Strad’s rhetorical take on the Takács Quartet’s previous Haydn recordings for Hyperion. With more marvellous Haydn on offer here, it’s a verdict which listeners will certainly share.

Written, as the composer put it, ‘in a quite new and special way’, Haydn’s string quartets Op 33 created something of an international sensation when they appeared in 1782. Their sophisticated conversational textures and fusion of a light, tuneful surface with taut motivic development would set the template for many Haydn quartets of the 1780s and ’90s. With the composer now a hot commercial property, publishers were eager to capitalize on Op 33’s success. For the next few years, though, Haydn’s energies were chiefly absorbed by opera; and, apart from the little D minor quartet Op 42, he composed no more string quartets until the Op 50 set of 1787.

In a letter of April 1784 to the Viennese publisher Artaria, Haydn wrote that he was working on three ‘very short’ quartets, each in three movements only, for a Spanish patron. Either he abandoned the commission, or the quartets are lost. But it may be that the lone Op 42 quartet of 1785 (which is short and relatively easy technically, though in four movements rather than three) contains music from the lost or aborted Spanish project. It was published by the firm of Hoffmeister, which specialized in issuing quartets singly, rather than in groups of three or six (Mozart’s D major quartet K499 being another Hoffmeister one-off).

The quartet’s outward simplicity, epitomized by the first movement’s unusual marking ‘andante ed innocentemente’, belies its subtle mastery. In each movement Haydn delights in making much of little. The opening movement, with its graceful dialogue textures, grows ingeniously from the three distinct motifs of its sole theme. The tone is one of subdued melancholy, flaring briefly to an intense climax near the end. True to form, Haydn continues to draw new meanings from the theme right through to the end.

The minuet, in D major, shares the first movement’s motivic concentration and easy, conversational give-and-take. Its gliding, almost Mozartian elegance is offset by a laconic D minor trio that works its initial bars in quasi-canonic imitation. True to the thematic economy of the whole quartet, the serene adagio is in essence a meditation on its tranquil opening phrase, unfolding in rich, glowing textures.

As in several of Haydn’s early symphonies (and like Mozart in his G major quartet, K387), the finale fuses the ‘learned’ and ‘popular’ styles, alternating stern passages of invertible counterpoint with music that could have tumbled straight out of a comic opera. There are also moments of hushed mystery where surface activity virtually ceases. The upshot is a movement both tense and witty, not least when Haydn keeps us guessing as to the exact point where the development ends and the recapitulation begins.

Early in 1799, some thirty string quartets later and fresh from the success of The Creation, Haydn agreed to write a set of six quartets for the music-loving aristocrat Prince Lobkowitz, who had recently commissioned Beethoven’s Op 18 quartets. By July 1799 Haydn had finished two of the quartets, and for the next three years or so still had hopes of completing the project. But his physical strength was gradually sapped by the composition of The seasons. The two quartets, published in 1802 as Op 77 and with a dedication to Lobkowitz, were to remain Haydn’s last completed works in the medium. They make a glorious culmination. With all the nonchalant mastery of technique acquired over five decades of quartet-writing, the Op 77 quartets encompass a vast range of experience, from rustic earthiness, through sociable wit and anarchic comedy, to Wordsworthian voyages across ‘strange seas of thought, alone’.

The allegro moderato of the G major quartet, No 1, unfolds against the background of a march, with a foretaste of Schubert’s ‘wandering’ movements in its tramping rhythms. (Hans Keller, in his book The Great Haydn Quartets, dubs the opening ‘a spiritualized march’.) Amid chirpy dialogues for the violins (as at the beginning) or between first violin and cello, volleys of violin triplets add a note of virtuoso brilliance. Characteristically, the ‘second subject’ begins as a reinterpretation of the first, with the cello taking the lead, before the second violin introduces a brief cantabile theme that will feature large in the development. Just before the end, Haydn transforms the march into a gentle lyrical melody: a delightful final touch that sets the seal on a movement whose smiling ease of surface conceals immense compositional sophistication.

Haydn’s emphasis on the sharp side of the harmonic spectrum in the first movement’s development makes his choice of E flat major for the adagio sound all the stranger. Violin-cello dialogues again feature in a movement that mingles sonata form, variation and passacaglia. Nowhere does Haydn’s famed thematic economy yield such profound results. The all-pervasive initial motif is initially sounded in bare octaves, then progressively enriched by countermelodies and expressive harmonizations. Touching realms of ‘deep but dazzling darkness’, this movement majestically crowns the series of exalted, hymnic adagios that are among the glories of late Haydn.

The composer’s label ‘minuet’ for the third movement should fool no one. Like the so-called menuettos of the quartets Op 76 Nos 1 and 6, this is a full-blown presto scherzo, replete with aggressive offbeat accents and huge leaps between registers. Listening ‘blind’, you might well exclaim ‘Beethoven’. Could Haydn have been influenced here by the scherzos in his former pupil’s Op 1 piano trios and early piano sonatas? The trio, plunging abruptly into E flat (the key of the adagio), is a manic peasant dance that foreshadows the equally frenzied trio of Beethoven’s last quartet, Op 135, written over a quarter of a century later.

This rustic spirit spills over into the finale, with its gypsy-tinged main theme and bouts of dizzying virtuosity for first violin. This is Haydn at his most antic. As in the adagio—and indeed the scherzo—the whole irrepressible movement grows from the opening bars, with the theme announced in bare unison, then pungently harmonized (with new accentuation), before being dismembered for quickfire dialogue.

Compared with the breezy (at least on the surface) first movement of Op 77 No 1, the allegro moderato of Op 77 No 2 is an altogether grander, more densely worked affair. Whereas the G major quartet had tended to favour the first violin, the ideas are here democratically shared between the instruments. The main theme is an ample, lyrical melody which Haydn immediately repeats and varies in an enriched texture. Its opening phrase pervades the second group of themes, initially as a shadowy counterpoint (in the second violin) to a sinuous chromatic melody. But it is an apparently incidental figure, based on repeated quavers, that dominates the central development. Progressively fragmented, this motif leads the music via a series of mysterious, gliding modulations deep into esoteric tonal regions. Haydn’s quartets had long been famous for their harmonic experiments. This still-astonishing passage caps them all.

The so-named menuetto, placed second, is as much a one-in-the-bar scherzo as its counterpart in the G major quartet. The mood here is even more zany, with its half-comic, half-truculent conflict between triple and duple metre (evocative of a Czech furiant), its lightning contrasts of texture, and the ongoing identity crisis for the cello, which persists in imitating a drum. As in the G major quartet, the trio dips to the key of the flat submediant (here D flat major), though now the tone is one of lyrical tenderness, enhanced by deep, veiled textures and a pianissimo dynamic.

The move to the ‘flat’ side of the spectrum for the trio is balanced by Haydn’s choice of the bright, ‘sharp’ key of D major for the andante. This is a favourite of many quartet players, with good reason. It opens with an ingenuous duet for violin and cello, irreverently described by composer Robin Holloway as ‘“three blind mice” with twiddles’. Yet, as so often in Haydn, the initial air of simplicity is deceptive. From the moment second violin and viola add their voices for a gravely sonorous harmonization of the melody (with all four instruments in their lowest registers), the music suggests a more complex experience. It unfolds as an individual synthesis of rondo and variations, with a ‘developing’ episode in D minor led by second violin, and a reprise of the theme on the cello’s high A string against filigree figuration for the first violin. Ebbing away mysteriously, with murmuring inner parts, the movement is a quiet, and sublime, apotheosis of Haydn’s many ‘walking’ andantes.

The finale, yet again based on a single theme, resumes and intensifies the scherzo’s tugs between duple and triple time. Few could guess the metre from the opening bars. Haydn here juxtaposes and transfigures polonaise and Slavonic folk-dance (complete with bagpipe drones) in music of unquenchable rhythmic and contrapuntal energy. Haydn’s rhythmic games reach their apogee at the start of the development, where the instruments tumble over each other in a riot of controlled mayhem.

This gloriously uninhibited movement rounds off what was destined to be Haydn’s last completed quartet. Five years later, in August 1804, the composer’s biographer Georg Griesinger wrote to the publishers Breitkopf & Härtel: ‘Haydn has stopped all work because of his health, and a quartet of which he has completed two movements is all he cares for, and which he sometimes labours over for a quarter of an hour.’ By this time the seventy-two-year-old composer could not muster the sustained concentration needed for what were traditionally the most intellectually demanding movements: the first (from which a sketch for a bass line survives) and the last, which we can guess would have ended in the major key. Published as Op 103, this D minor quartet, originally intended to supplement the two Op 77 works, remained a fragment.

What would have been the quartet’s slow movement, an andante grazioso in B flat, opens with one of Haydn’s most friendly tunes. The melody’s innocence, though, is compromised by piquant touches of chromatic harmony and sophisticated, semi-contrapuntal textures. The tonal adventures of the central section are the boldest in any Haydn quartet slow movement. After a mysterious pianissimo turn to G flat major, the music ventures as far afield as C sharp minor and E major, the polar opposite of B flat. Following a reprise of the smiling opening, the drooping chromaticisms of the coda add a note of valedictory melancholy.

Chromaticism also suffuses the fiery, jagged D minor menuetto—definitely a minuet rather than a proto-scherzo. No Haydn minuet is more restless or harmonically unstable. In the second half a nagging dialogue for violin and cello further heightens the intensity, culminating in a dramatic pause and a ferocious upward swoop for first violin. Unquiet minor turns to consolatory major in the trio. Yet even here the yearning, bittersweet melody, introduced by violins in octaves, is destabilized by quizzical hesitations and abrupt dynamic contrasts.

Contemporary with Beethoven’s ‘Eroica’, this touching and powerful fragment is testimony to the aged Haydn’s undimmed inventiveness as a composer of string quartets: a medium which he, more than anyone, raised from its humble origins in the alfresco serenade to the supreme touchstone for a composer’s ‘taste’, ingenuity and expressive power.