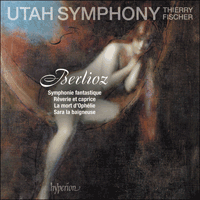 The choral versions of La mort d’Ophélie and Sara la baigneuse may be relative rarities on record but both are vintage Berlioz, short and striking, which should be much better known. Yet further incentive to acquire a terrific account of the Symphonie fantastique.

‘Fischer is a fine Berliozian …the Ball is the real highlight…the rest of the disc is imaginatively programmed. In the concertante Rêverie et caprice for violin and orchestra, Berlioz employs a discarded aria for Teresa from his opera Benvenuto Cellini. Philippe Quint’s gorgeous, feminine tone is perfect casting, deliciously played and drawing out the cantabile lines of this gem’ (Gramophone)
‘For the past ten years, the conductor Thierry Fischer has been for the Utah Symphony Orchestra what Mariss Jansons did for the Oslo Philharmonic and Simon Rattle for the City of Birmingham orchestra: he lifted a decent and well-regarded local orchestra up to an altogether higher level … one of the first things I noticed in the opening Rêveries - Passions was how exactly Fischer was following the many precise indications which Berlioz had put into his score: the phrasing, the balance between the instruments and the numerous slight quickenings and slowings that he asks for. Next came the excellence of the woodwinds, notably the first flute in the first statement of the idèe fixe … [the couplings] are exceptionally interesting … the recording is rich and full … a worthwhile issue’ (MusicWeb International)» More
‘Since Thierry Fischer took over the reins as its music director in 2009, the Utah Symphony has not only thrived but blossomed, as its recent Mahler First Symphony and Saint-Saëns recordings bear out. The musicians certainly give their conductor everything he asks for in this generously filled all-Berlioz disc … Berlioz’s deft deployment of three choral groups in Sara la baigneuse provides an ideal showcase for Fischer’s supple and vividly characterized vocal forces … full texts and translations are included, along with superb annotations by Berlioz scholar David Cairns’ (Classics Today)» More

The sudden appearance of the Symphonie fantastique on the Parisian artistic scene in December 1830 used to be thought of as a near-miraculous phenomenon. It was likened to the birth of the Greek goddess Athena, springing fully armed from the head of her father Zeus. Having come out of nowhere, the symphony was the final and strangest event in a year that had already witnessed the July Revolution’s overthrow of the Bourbon monarchy, and the scandalous premiere of Victor Hugo’s rule-defying play Hernani.

In fact the work has clear ancestry and influences, and we can trace them. With all its startling innovations—including the introduction of instruments and textures new to symphonic music—its roots in existing music, past and present, are deep. Berlioz was not such a fool as to ignore what others had done and were doing. He was intensely responsive to what he admired in the music of his predecessors and contemporaries. His ambition was to do something new—as he said, ‘music is free, and does what it wants, without permission’—but as a continuation, not a repudiation, of the past. The Fantastique is the culmination of eight years of diligent study and hard work by a young man of exceptional intelligence and supersensitive imagination who had arrived in Paris from the provinces shortly before his eighteenth birthday, aware that he knew almost nothing—he had not even heard an orchestra—but determined to make up for lost time. He realized how much there was to learn.

In those eight years he set himself to absorb everything he could. At the opera he listened to Gluck, Méhul, Spontini, and to Weber, he compared what he heard with what was in the scores at the Conservatoire library, and he befriended musicians and got them to try out new ideas. In effect he gave himself his own course in orchestration (a subject not on the curriculum of the Conservatoire), so that by 1830 he was master of the orchestra and could use his systematically acquired knowledge of instruments—how they functioned, what they could be made to do, etc.—to translate into sound the visions that were alive in his mind.

The programme of the five movements of the Symphonie fantastique may be summed up as follows:


Rêveries – Passions: Sadness, imagined happiness, creating—out of a state of yearning—an image of the ideal woman, represented (allegro) by a long melodic span. The melody, in its alternate exaltation and dejection, its fevers and momentary calms, forms the main argument of the movement. At the end, like a storm that has blown itself out, the movement comes to rest on solemn chords.
Un bal: A ball at which the beloved is present. Waltz, at first dreamlike, then glittering, then garish. Middle section, with the melody assimilated to the rhythm of the dance.
Scène aux champs: A shepherd pipes a melancholy song, answered from afar by another. Pastoral scene: a long, serene theme played by flute and first violins. Agitated climax, precipitated by the beloved melody, which later takes on a more tranquil air. Dusk, distant thunder. The first shepherd pipes alone, no longer answered by his mate. Drums and solo horn prepare for …
Marche au supplice: The dreams of the first three movements intensified into nightmare and the full orchestral forces deployed. The artist, under the influence of opium, imagines he has killed the beloved and is being marched through the crowded streets to execution. The melody reappears on solo clarinet, but is cut off by a guillotine stroke of the whole orchestra.
Songe d’une nuit de sabbat: Strange mewings, muffled explosions, distant cries—a throng of demons and sorcerers gather to celebrate Sabbath night. The executed lover witnesses his own funeral. The beloved melody, now a vulgar, cackling tune on the shrill E flat clarinet, joins the revels. Funeral bells, Dies irae chant, parody of the Church’s ritual for the dead, witches’ round dance. The climax, after a long crescendo, combines round dance and Dies irae in a blaze of rhythmic and orchestral virtuosity.

We can watch Berlioz’s style develop during these apprentice years till it is fully formed in the symphony. The long-breathed melodic lines of French classical opera lie behind the symphony’s governing melody. The macabre, grotesque sonorities and gestures of the Witches’ Sabbath grow out of the Wolf’s Glen scene in Weber’s Der Freischütz. Above all, the Symphonie fantastique is the child of Beethoven.

Berlioz compared the impact of Hamlet and Romeo and Juliet to a thunderbolt; and the lessons of Shakespeare’s free forms, created afresh in response to each new poetic world, had a profound effect on his own methods of composition (as well as inspiring his at-first-unrequited passion for the Irish actress Harriet Smithson). But even more immediately vital was the revelation of Beethoven’s music, six months later, at the new Conservatoire concerts in 1828. They showed him, in a flash, that the symphony was a medium of intimate, personal, dramatic expression every bit as potent as opera. The symphony, he realized, was the ideal vehicle for the kind of confessional, autobiographical work that he would write, under the direct influence of Beethoven, two years later. To him, Beethoven’s symphonies—not just the ‘Pastoral’, with its movement titles and explicit programme, but the ‘Eroica’ and the fifth as well—were dramas, driven by extra-musical ideas.

He could do the same. As in Beethoven, a network of influences, literary as well as musical, could go into the composition—not only the course of his hopeless passion for a distant beloved but the whole emotional life he had lived till then—yet music remained sovereign; it would still be, as Beethoven had said of the ‘Pastoral’, ‘expression of feeling, not painting’. Commentators used to like describing the Symphonie fantastique as an unruly mish-mash. But its design is precise and tautly constructed; to quote the American scholar Edward Cone, ‘the unity of the symphony speaks out clearly against such a view’. The literary programme offered to the Conservatoire audience merely gave the context of the work. It is not this that holds the score together and makes it a timeless record of the ardours and torments of the young imagination. The music does that.

The change in concert practice has meant that Berlioz’s shorter pieces, written for the more diverse and bitty programmes customary in the mid-nineteenth century, have tended to be neglected today, despite the rise in the composer’s reputation. Maybe it doesn’t matter so much that Rêverie et caprice—a transcription of the original, rejected aria for Teresa in Berlioz’s opera Benvenuto Cellini, made to display the virtuosity of solo violinists on Berlioz’s tours of Germany—is rarely performed. But both Sara la baigneuse and La mort d’Ophélie are vintage works, short but striking, and deserving to be much better known.

In its original voice-and-piano configuration La mort d’Ophélie—a setting of the paraphrase by Ernest Legouvé of the Queen’s narration in Act IV of Hamlet—dates from 1842, about a year after the song cycle Les nuits d’été. By then Berlioz’s marriage to Harriet Smithson, the Ophelia with whom he had fallen in love fifteen years before, was in ruins. The song, with its clear reminiscence in the opening bars of the idée fixe from the Symphonie fantastique—Harriet’s theme—is surely a lament for that lost love. In London in 1848, with a projected Shakespeare evening at Covent Garden in mind, Berlioz scored the song for a small orchestra of muted strings, horns and soft-grained woodwind sonorities—flutes, clarinets and cor anglais, but no oboes or bassoons—and rewrote the solo vocal line as a two-part women’s chorus, transposing it down a tone to A flat major.

The outline of the music is based on the four-verse structure of the poem, but the strophic shape is constantly modified so as to create a single flowing continuum in which the melody and its sad, lilting refrain are never exactly the same. A subdued dynamic level is established at the outset by the strings’ murmuring semiquavers, suggestive of the brook along which the mad Ophelia wanders. Only twice does it rise to forte: once when the branch of the willow tree breaks and plunges the heedless girl into the stream, and again when the weight of her dress finally ‘Pull[s] the poor wretch from her melodious lay / To muddy death’, leaving her song to sink down after her in a long diminuendo.

Sara la baigneuse is a setting of a poem from Victor Hugo’s Les Orientales. The book was a favourite of Berlioz’s. In 1832, while in Italy, he composed one of its poems, La Captive, as a song for voice and piano, and two years later he made a setting of another of the poems, Sara la baigneuse. At the time he was living with his wife Harriet in the village (as it then was) of Montmartre. It was summer; their lodgings gave onto a leafy garden overlooking the plain of Saint Denis. Money was short, but they were happy.

Sara, perhaps, owes something of its almost untroubled concord to this state of contentment. The original setting, for a quartet of male voices and orchestra, was developed later into a richer texture of three choral groups—soprano-tenor-bass, soprano-contralto, tenor-bass—and a delicately scored chamber orchestra with timpani, reflecting the daydreams of the nonchalant Sara as she swings in her hammock. Towards the end her light-hearted but chiding companions intrude with a change of tone and a new theme; but a single euphonious glow irradiates the piece, from the glint of piccolo and flutes in the opening bars to the gentle dying fall as the voices pass into the distance, a characteristically Berliozian dwindling perspective.