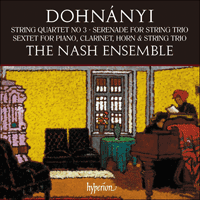 The music of Dohnányi (admired by figures as disparate as Brahms and Bartók) embodies virtues of taste, humour, impeccable control of form and beauty of style; all qualities relished by The Nash Ensemble in wonderful new recordings which can only assist with this composer’s continuing rehabilitation. 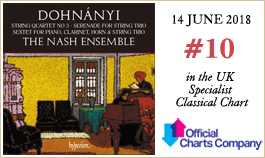 ‘It’s a gloriously overripe, at times rapturous interpretation [of the Sextet], and I’m smitten by it. If you’ve never taken to Dohnányi’s music before, these performances should win you over. If you’re already a convert, you’ll want this’ (Gramophone)
‘Few record companies seem to be holding such a candle for Dohnányi’s chamber music as Hyperion … The Nash Ensemble triumphantly surmounts all the technical challenges while projecting absolute enjoyment of and devotion to the music’ (BBC Music Magazine)» More

‘A lovely recording … a perfect vehicle for the current incarnation of The Nash Ensemble and they don't disappoint’ (BBC Record Review)
‘What has characterised everything the Nash Ensemble has done since their very earliest days is a sense of absolute joy in music making and a passion which glows out of every single note they play. If we might reasonably expect a certain predictability to have crept into their performances after half-a-century at the very top of their game, nothing could be further from the truth with this invigorating and gloriously immersive journey through three very different chamber works by Ernö Dohnányi’ (MusicWeb International)» More
«Le groupe anglais ressuscite pratiquement le compositeur hongrois oublié depuis sa mort, principalement en raison de la campagne calomnieuse don’t il a été victime. Le résultat est un album essentiel pour tout mélomane passionné, ou même seulement curieux, qui se respecte.» (Ici Musique, Canada)

The name of Ernő Dohnányi (1877-1960), the Hungarian composer, pianist and conductor, almost disappeared completely a couple of decades after his death, and with it his works were nearly forgotten. This tragic break in reception was primarily a result of the political situation in his home country. Having single-handedly held most of the prominent positions in Hugarian musical life in the 1930s (he was concurrently director general of the Franz Liszt Academy of Music, conductor of the Budapest Philharmonic Orchestra and musical director of Hungarian radio), the increasingly communist post-war government accused him of sympathizing with right-wing ideologies, and he was branded a Nazi war criminal by newspapers in Hungary and America. Although he was never officially charged and, what is more, recent research has now revealed that such accusations were completely unfounded (so much so that Dohnányi expert James A Grymes has called him ‘a forgotten hero of the Holocaust’), the rumours surrounding the composer cast a shadow over his later years and had a catastrophic effect on his posthumous reputation.

It was only in the late 1990s, following the end of communism in Hungary and the subsequent period of political and economic transition, that research into Dohnányi’s works and a rehabilitation of the composer’s reputation began. Since then, Ernő Dohnányi has enjoyed a steady increase in reasearch both in Hungary and abroad, and performances of his works have undergone a similar resurgence.

This turnaround is certainly not a coincidence: while Dohnányi’s musical style was considered obsolete and anachronistic by audiences of his day, for the twenty-first-century listener his unique stylistic voice and the pervading quality of his works prevail. Dohnányi’s refined taste, fine humour, impeccable control of form and the beauty of his style have never been denied, even by his most biased critics. Moreover, the more we learn about Dohnányi’s oeuvre, the less conservative his style seems. It is simply impossible to regard Dohnányi’s musical language, which exhibits so many exciting and sometimes even modern features and shows such an unbelievable open-mindedness, as being merely old-fashioned. As Béla Bartók (1881-1945), Dohnányi’s fellow composer and childhood friend, wrote of his first published work: ‘The most wonderful thing is that Dohnányi composed this formally completely perfect piece at the age of seventeen, and it will always sound fresh in spite of the obvious influence of other composers.’ The Op 1 piano quintet being referred to by Bartók, of which Brahms is also said to have proclaimed ‘I could not have written it better myself’, is one of Dohnányi’s more popular works. It is indeed an accomplished composition given that Dohnányi composed it at such a young age, however it would be a mistake to identify it as truly representative of Dohnányi’s style.

Alongside the better-known serenade for string trio, Op 10, this album includes the third string quartet, Op 33, and the sextet, Op 37, two compositions which are unfairly rarely heard. As such, it lays out three distinctive stylistic periods of Dohnányi’s compositions. The serenade is an early piece; composed in 1902, just seven years after his inaugural piano quintet, it clearly demonstrates the technical mastery and endless invention of this young and cosmopolitan composer-pianist, as well as the fine sense of humour which pervades his oeuvre as a whole. Only a few years after the composition of the serenade, Dohnányi had become established as a highly respected professor at the Hochschule für Musik in Berlin. The outbreak of World War I forced him to return to Hungary, where he established close connections with his compatriots Béla Bartók and Zoltán Kodály: a triumvirate at the forefront of new Hungarian music. The succeeding string quartet No 3, composed in 1926, not only typifies his body of nationalistic works, but also clearly displays the influence of modernist techniques on his writing. Dohnányi composed much less during the 1930s, a consequence of his many prominent public roles and wide-ranging administrative responsibilities. The sextet took him several years to write, and with the exception of his Aria for flute and piano (Op 48 No 2, written during his years as an emigré in America), is Dohnányi’s last composition for chamber ensemble, and in many senses represents the crowning achievement of his chamber music oeuvre.

The serenade for string trio, Op 10, consists of five extremely cleverly structured movements. All of them are full of virtuoso ideas: in the first movement (‘Marcia’), Dohnányi presents the main theme alongside its inversion; in the ‘Romanza’ the accompaniment disorients the listener’s sense of metre. It is the very simple but witty chromatic theme that makes the ‘Scherzo’ memorable, and the fourth movement displays the composer’s huge talent for writing variations on its delightfully archaic theme in an incredibly concentrated and compact span of only a few minutes. A brilliant finale in rondo form brings the work to a triumphant close.

Even Kodály, certainly not famous for praising works lightly, spoke highly of it in a letter to his future wife Emma, herself a composition pupil of Dohnányi’s: ‘It is for the Serenade alone that I love him, and why I ask Fate and wish he could compose some more pieces like that to make angels’ hearts smile when they hear them.’ In his own notes he further described the piece as ‘beautiful, wonderful, at some places it is painful like withering in spring, a little decadent, very modern, sometimes healthy and dry, sometimes too sentimental and at certain places somewhat theatrical and sometimes in brutal Koesslerian counterpoint, sometimes sparkling, and on the whole I find it very much to my liking’.

While the serenade was Dohnányi’s first and only composition for string trio alone, the string quartet in A minor, Op 33, is his third piece for this ensemble, and clearly benefits from the experiences gained in writing its two predecessors (No 1 in A major, Op 7, and No 2 in D flat major, Op 15). It has an ambitious structure which places the scherzo-like section in the centre of the lengthy slow movement to create large-scale symmetry of form. Its unique counterpoint spiced with frequent unisons is rightly intriguing for the listener, as are the highly decorative sections which are at times reminiscent of Shostakovich or Bartók, at others strongly influenced by jazz.

The quartet was composed for the Waldbauer String Quartet, which had been formed for the twin premiere of Bartók and Kodály’s first string quartets in 1910 and went on to enjoy close relationships with all three Hungarian composers throughout the first half of the twentieth century. The first violinist Imre Waldbauer wrote to Dohnányi following the premiere, saying: ‘We are immensely grateful and pleased that you wrote this piece and that you know what a piece that we love from the bottom of our hearts means for us, and it is very rare—once or twice in a lifetime—that we come across such a piece to add to the old treasures. And we are very proud that it is us who could perform it for the first time and we thank you for this opportunity.’

The four-movement sextet, Op 37, is even more complex: formally, technically and in its instrumentation. As a reviewer of the 1935 first performance aptly put it: ‘Playing the music is so vital and so inseparable from its elements that it cannot be divided into separate formal and aesthetic analyses. Form and content are inseparable. If one focuses only on the form, one comes across the content and if one looks for the intellectual content, one can find it in the clever forms.’ We can agree with the reviewer on another point, too: the piece becomes more fascinating as the movements progress. The third movement, a theme and variations, provides the same combination of vast musical variation and small-scale concision as the corresponding movement in the serenade. The reviewer writes: ‘For every term he has at least twice as many synonyms as others do … this is where his superior mastery of variation originates from.’ Having reached its climax at the furthest limits of variation from the theme, the music plunges attacca into the breathless final movement. A passionate new theme in the piano gives truly unstoppable momentum towards the conclusion, a fitting finale which maintains Dohnányi’s characteristic humour to the last.