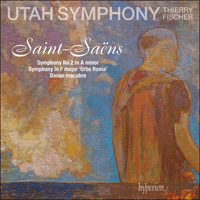 Saint-Saëns’s Symphony No 2 is, by any standards, an outright winner and deserves to be much better known. Here, it’s one of two substantial works flanking a rambunctious account of Danse macabre. 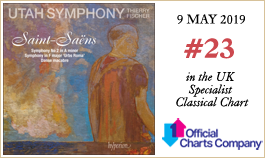 ‘As in their superb account of the Organ Symphony, Thierry Fischer and the Utah Symphony’s performances here are polished and graciously articulate … there’s exhilaration, too, mind you—in the quicksilver finale of the A minor Symphony, for example, Fischer and the orchestra show they can turn on a dime … the entire programme is recorded with crystalline clarity in a natural, airy concert-hall perspective. I’m already craving the next instalment’ (Gramophone)
‘There’s a new series of Saint-Saëns recordings from America that’s starting to get some positive critical attention, and for very good reasons … this is turning out to be an excellent reappraisal of symphonic Saint-Saëns … I hope there’ll be more’ (BBC Record Review)
‘And then there is Danse macabre, one of Saint-Saëns’s biggest hits, and rightly so, brilliantly descriptive of a graveyard at midnight and dancing skeletons, cued by fruity-toned concertmaster Madeline Adkins; as for the Symphonies, Danse is given a performance of style and commitment … enjoy!’ (Classical Source)» More

Any rational assessment of Saint-Saëns’s career must proclaim it a success on every front that mattered: as composer, pianist and even writer. But it was not without its setbacks. While one critic felt that his performances as a ten-year-old of Mozart’s B flat concerto, K238, and Beethoven’s third piano concerto showed him to be ‘one of those high intelligences that are epoch-making’, another criticized his 1852 Ode à Sainte Cécile as lacking ‘a young man’s desire to create a personality for himself’: to which he might have replied that either you have a personality or you don’t, and that desire has nothing to do with it. A further blot on his record (if it was such) was his failure to win the Prix de Rome, which would have entitled him, had he wished, to partake of the ‘dîners des pris de rhum’ (‘dinners for those hooked on rum’) regularly celebrated by other talented non-winners such as Chabrier, Messager, Fauré and d’Indy.

Whether the 1856 F major symphony he called Urbs Roma had anything to do with this failure is a moot point. A further mystery surrounds the identity of the conductor of the first performance in Paris on 15 February 1857: was it Jules Pasdeloup, or was it the composer? What we do know is that Saint-Saëns wrote it for a competition held by the Société Sainte Cécile of Bordeaux, which he won, and that ‘Urbs Roma’ was the anonymous pseudonym the judges required to ensure fair play. He had not yet been to Rome when he wrote the piece, leading commentators to opine that the work might in some general sense describe either grandeur, or dissolution, or whatever the word ‘Rome’ can be taken to imply. One last irrefutable fact is that he never promoted the work or published it (this finally happened in 1974), so we may assume that it was not a piece he was proud of—which is not to say that it lacks interest for us, both as a marker for the future and indeed for its own several virtues.

Grandeur is certainly the word to describe the opening, which would have had the extra benefit of showing the judges that he took the competition seriously. Lyrical passages offer contrast, but undue repetition may make us think of Stravinsky’s comment on listening to Bruckner’s symphonies that he was ‘mentally turning pages way ahead of the actual place’. The development section follows precedent in starting with a surprise chord (of D flat major) and the ensuing fragmentation of ideas is deft but rather predictable, while the mature Saint-Saëns would never have allowed the unintentional surprise of the final paragraph where the music seems to be heading for D major, before being finally wrenched round into F. The deliberately unsophisticated dance of the second movement is full of delightful touches, including trills and the decorations in thirds that had been around since Monteverdi.

Grandeur returns in the third movement, dubbed by one commentator ‘a funeral march for the death of an empire’. The work’s basic tonality of F gave Saint-Saëns the opportunity of embracing F minor, with all that key’s traditional colouring of dark and melancholy pomp. Again, youthful prolixity makes the movement less successful than it might have been and the persistent chromatic slides do not convince. After this, we really need something bracing. Instead we are given a smooth poco allegretto theme and seven variations. If they make an unsatisfactory ending to the work, in themselves they contain much that is charming and, in the 5/4 metre of the sixth variation, quite bold. The fifth variation in F minor looks back to the third movement, while the final one, with its scurrying scales, contains some of the most imaginative writing of Saint-Saëns’s whole career—such a pity that it would suit a ballet better than this symphony!

The unsteady nature of his inspiration in this symphony may possibly reflect the form’s status in mid-nineteenth-century France, where it was seen as an essentially Teutonic product: Édouard Lalo’s letters are full of anxiety that the public have come to regard him as a ‘symphonist’, that is, a purveyor of seriousness and boredom. Given this situation, it is surprising that in the 1850s Saint-Saëns should have written no fewer than five symphonies (his D major one of 1859 is still unpublished), with only the two 1855 examples by Gounod as contemporaries; but perhaps this was the nearest he came to ‘creating a personality for himself’? The Symphony in A minor, which he designated No 2, of 1858-9, may justifiably have been the one in which he felt he had succeeded in his lifelong aim of reconciling inspiration and structure. It is by any standards an outright winner, and with it he deserted the symphonic form until 1886.

It is dedicated to the conductor Jules Pasdeloup who gave the first Paris performance on 25 March 1860, following the world premiere in Leipzig on 20 February 1859. Pasdeloup was a tough character who dominated Parisian concert halls for at least twenty years and had no qualms about turning down music by important (or self-important) composers, and he may have seen it as a compliment to his taste that, after a short prelude, this symphony starts with a fugue on the same material, Saint-Saëns recording that many of the audience were scandalized by such a ‘learnèd’ innovation. The theme itself is also bold in its juxtaposition of tonic and dominant outlines and the whole movement swings along with marvellous élan. The tiny second movement is a miracle of simplicity, its opening tune unfolding over a single bass note, and Stephen Studd catches its character nicely in his description of it as ‘a brief glimpse of an imagined past, of [his] great-aunt Charlotte as a little girl among the perfumed elegance of an eighteenth-century drawing room, intuitively perceived across two generations’. Unlike the funeral march of Urbs Roma, it leaves us wanting more.

The third movement returns to the boisterous, unsophisticated mood of the second movement of Urbs Roma, though the syncopation in the central section would test any village band to the utmost. The fragmentation of ideas is now full of ingenious twists and the four-bar phrases are excitingly disrupted. In the vivacious finale, Saint-Saëns reveals his extraordinary ability, on his day, to make the simplest things interesting. Here it’s descending scales that become instruments of pure joy—Haydn seen through the prism of Gounod and, no less, of Mendelssohn who peeps through in a sudden break in activity and in the ensuing two, cool woodwind chords, straight out of A Midsummer Night’s Dream. Truly we may say of this symphony, as Dr Johnson did of Thomas Gray’s Elegy in a Country Churchyard: ‘Had he written often thus, it had been vain to blame, and useless to praise him.’

Usually Saint-Saëns is credited with introducing the symphonic poem into France but, as Stephen Studd has pointed out, some of Berlioz’s music essentially falls into this category, as does Franck’s Ce qu’on entend sur la montagne of 1848, based, like Liszt’s symphonic poem of the same title and date, on the poem by Victor Hugo. But certainly Saint-Saëns was the first French composer to use the form more than incidentally. The first two works so called, Le rouet d’Omphale and Phaéton of 1871 and 1873, and the last, La jeunesse d’Hercule of 1877, stick respectably to Greek legend, and we may regard them as models for ‘developing a taste for instrumental music’ as envisioned by the recently founded Société nationale de musique, in which Saint-Saëns was an important player. But, as we know from the The carnival of the animals, he also had his quirky side and his third symphonic poem abandoned Classical myth for Romantic horror. In 1873 he wrote the song Danse macabre on a poem by Henri Cazalis but, as most singers were finding it too difficult, decided in 1874 to rework the material for orchestra. The result caused widespread consternation: not merely the deformed Dies irae plainsong (another borrowing from Berlioz) but that horrible screeching from solo violin? And a xylophone? Not to mention the hypnotic repetitions (would Boléro have been written without them?). Those who knew the song were aware that in the churchyard the skeleton of the countess danced with that of the cart-driver—this with memories of the Paris Commune all too vivid. Could such populist and, it had to be faced, memorable music count as ‘serious’? Thirty years later, Debussy, smarting under his colleague's dismissal of Prélude à l’après-midi d’un faune as containing no music in the strict sense of the term, wrote of the piece: ‘M. Saint-Saëns won’t hold it against me if I dare to say that there he gave hope of being a very great composer.’ Saint-Saëns did not, so far as we are aware, respond. But knowing Debussy as he did, he probably recognized that this was the most he would ever get out of him by way of a compliment. And indeed it was not entirely without value …