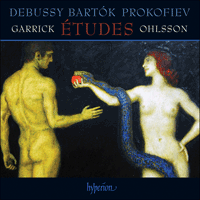 Garrick Ohlsson has an unbeaten reputation as the master of the miniature. In this new recital he presents three sets of Études: the twelve by Claude Debussy (so ferocious in their demands they were shunned even by elite pianists for decades), as well as Prokofiev’s revolutionary opus 2 and a set of three lesser-known works by Bartók. In all Ohlsson excels.

‘It’s the slighter sets by Prokofiev and Bartók … that show off Garrick Ohlsson’s playing most convincingly. His powerful technique motors through Prokofiev’s four miniatures with tremendous confidence’ (The Guardian)» More

In January 1948, a time when Russian artists in general were doing their level best to avoid being condemned as renegade bourgeois formalists, the fifty-six-year-old Serge Prokofiev was publicly upbraided for his habit of ‘stepping on the throat of his own song’. Unlike much artistic criticism of that time and place, this charge had some truth in it, and nowhere is this better exemplified than in two of the piano works the composer had premiered in Moscow nearly forty years earlier, on 6 March 1910. His first piano sonata parades the lyrical Prokofiev, and listening to it one even thinks of Rachmaninov’s third piano concerto written just a year previously. Its companion pieces, however, the four Études, Op 2, from 1909 (of which he played just the first two and the last), were what the French call ‘a quite different pair of sleeves’: this is Prokofiev the enfant terrible, the young man who would later claim that ‘the principal achievement of my life (or if you prefer, its principal failing) has always been the search for originality in my own musical language. I have a horror of imitation, a horror of things that have already been done’.

Understandably, Prokofiev did not see eye to eye with Liadov and Rimsky-Korsakov, his teachers at the St Petersburg Conservatory, the latter writing on his 1908 report: ‘Talented pupil, but lacking in maturity.’ No doubt Prokofiev would have found a less polite word for ‘maturity’, which was the very last thing he intended to display. At the age of eighteen, he already had a formidable reputation as a pianist, and both technically and musically these studies are not for the faint-hearted. Like the Sarcasms for piano he was to compose between 1912 and 1914, they take an oblique view of life, subjecting standard material like scales and arpeggios to provocative deformation, if only, as in the first study, suddenly to back off by introducing a jolly little tune in C major. In case there’s any doubt about the key, the final bars indulge in a D minor orgy. The second study in E minor toys with elegance in its rippling scales, both standard and unorthodox. The last two studies are, curiously, both in C minor. In the third, deep bell sounds alternate with scales in chromatic thirds and sixths that regularly threaten to get out of hand, while the fourth, launched by left-hand ostinatos, rejoices in sarcastic wrong notes and finally makes up for the overblown ending of the first study.

It has often been observed that the late works of composers tend towards a certain abstraction. Claude Debussy’s Études might well qualify under this heading, but we should remember that when he wrote them, in the summer of 1915, he was still a little short of his fifty-third birthday, albeit not a well man and oppressed by thoughts of the war. Maybe he had intended his last prélude, Feux d’artifice, as a final bouquet offered to pictorialism? Certainly, editing Chopin’s Études reminded him of the delights inherent in self-imposed limits.

Pour les ‘cinq doigts’, subtitled ‘d’après Monsieur Czerny’, nevertheless starts from an image—of the child practising, one which for some reason held a special place in Debussy’s affections (see Dr Gradus ad Parnassum from Children’s Corner); here the ‘good’ hand is soon subverted by the ‘naughty’ one and, as in Reflets dans l’eau, the struggle continues to the end. In the second study, Pour les tierces, Debussy had to find something different from the penultimate prélude, Les tierces alternées, and succeeded. What a treasure-house of textures here, from the echoes of Pelléas’s sea and love music to the starkly triumphant final chords! The composer was justifiably proud of the ‘unheard-of things’ in Pour les quartes, the whole of which is an extraordinary compendium of sounds, unheard-of in French piano music at least. We have no record that he knew any of Scriabin’s piano music, although by this time he had heard Schoenberg’s Three Pieces, Op 11. Even so, the prevailing interval of the fourth entailed a rethinking of traditional third-based harmony, to the point that it’s not clear what key the étude ends in.

In Pour les sixtes Debussy most obviously acknowledges his debt to Chopin, setting it in D flat major, the same key as Chopin’s study in sixths, Op 25 No 8, starting with the same pair of notes in the right hand, and soon breaking into Chopinesque triplets. The whole étude subscribes to Debussy’s general request that music display emotion without epilepsy. Pour les octaves, on the other hand, he marks Joyeux et emporté, librement rythmé (‘joyful and passionate, freely rhythmical’)—as well as ‘passionate’, ‘emporté’ can in fact mean ‘quick-tempered, hot-headed’, and is even used of a ‘runaway’ horse! The sharp contrasts of themes and dynamics do give the impression of inspiration almost bursting through the formal envelope. Pour les huits doigts seems to be a gesture of respect towards the eighteenth-century clavecinistes. Within the consistently rippling demisemiquavers, Debussy shapes phrases through dynamics and discreet stresses, until on the last page the bass notes, légèrement expressives (‘lightly expressive’), flower briefly into a tune.

Pour les degrés chromatiques, opening the second book (the Études were published in two books of six pieces each), employs full or partial chromatic scales to ‘drown the tonality’, as Debussy had put it many years earlier. Against it, we feel the steadying influence of a tonal tag in the left hand, but even this soon becomes chromatically inflected. With Pour les agréments we come for the first time to musical matter that is distinctly Debussyan. All through his mature piano music, the performer is regularly faced with choices over what is primary and what is secondary material, at the opposite extreme from the tune-over-oompah of Italian opera. Agréments (ornaments) might seem slender matter for an étude, until we once more recall the clavecinistes, where playing without ornaments is to serve fish without a sauce. It goes without saying that Debussy’s agréments are of unparalleled elegance and variety. The smooth surface of this piece is immediately ruffled by Pour les notes répétées, though, as so often in these Études, the briskness is in time offset by a legato tune in the left hand, here migrating to the right, before the molto staccato dance leads to a typically evanescent conclusion.

In Pour les sonorités opposées Debussy makes almost his last return to the world of the Images: contrasts of sonority, whether simultaneous or successive, had after all been a crucial element in the technique of illusion. This must be a candidate for the title of the most sheerly beautiful of all his piano pieces, its apparently aimless harmonic wanderings firmly contained by distant trumpet calls always at the same pitch. The meaning of the final word in the title Pour les arpèges composés has been much discussed, but the simplest interpretation may be that these arpeggios have been ‘put together’ from various sources, like a ‘salade composée’—traditional triadic shapes certainly form part of them, but in combination with Debussy’s usual 7ths and 9ths as well as intermediate intervals. Their notation both in ordinary and in small type suggests that they inhabit the same border country as Pour les agréments between the primary and the secondary. More decisions for the pianist! Finally, in Pour les accords, Debussy goes out with a bang. Here the clear outlines of the clavecinistes are married with the violence of the prélude Ce qu’a vu le vent d’ouest, while in the central Lento section he gives utterance to music of indescribable tenderness and melancholy, as if saying a last farewell to the world of illusion.

The Études contain some of Debussy’s most demanding piano-writing—before 1950 Adolph Hallis was alone in recording the complete set, and even Horowitz risked only the relatively easy Pour les arpèges composés. But, despite their difficulty, through them all runs that playful spirit that was never dormant for long in Debussy’s music, and was no doubt continually revived by games and conversations with his little daughter Chouchou. As he told his publisher: ‘These Études conceal a rigorous technique beneath flowers of harmony [sic]. To put it another way, “you don’t catch flies with vinegar!” [re-sic].’

Béla Bartók’s three Études, Op 18, composed in 1918, that is three years after Debussy’s set, show him moving away from the Frenchman’s influence that had been crucial to works such as his first string quartet of 1909 and the fairy ballet The Wooden Prince. The successful production of that ballet in 1917 encouraged Bartók to strike out on a modernist path of his own, embracing atonality and showing signs of an acquaintance with the music of Schoenberg. His own pianistic skills had been honed at the Royal Academy of Music in Budapest through the teaching of István Thomán, who had been a pupil of Liszt, and there are unmistakable echoes in these studies of Lisztian bravura.

One of the criticisms regularly levelled against both atonal and twelve-tone music has been that it tends to lack emotional variety, boasting a strong hand in misery and terror but a far weaker one in joy or lyricism. If a superficial acquaintance with these études may seem to endorse this view, a longer one shows how imaginatively and expressively Bartók manages his atonal style, and how his folk-song studies somewhat surprisingly find a place within it. The first étude deals in ostinato quavers with typically Hungarian accents on downbeats, as in the spoken language. To the innocent ear, much of this sounds like movement in semiquavers, whereas in fact the hands are playing expanded octaves—much more difficult! The folk influence can be heard in the moments where the harmonic movement suddenly freezes, as if the dancers have taken to stamping on the spot before moving off once more.

The second étude privileges widespread arpeggios adorning a chromatic theme, a texture Bartók would return to in the ‘Elegia’ of the Concerto for orchestra. After a chordal central section, marked to be played quasi cadenza, senza misura, poco rubato, the arpeggios and the theme return in varied form. The whole piece has a mysterious, searching quality. Finally, the third étude proves that atonal music can be fun, with enough repetitions to give the listener a handle, even if they are spiced with rhythmic distortions, and with a sort of folk song in the middle section. The last two bars return to the chromatic theme of the second étude, leading to a final chord that is, almost, tonal.