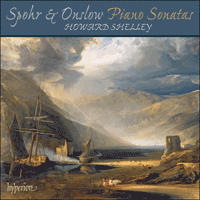 Howard Shelley continues his appraisal of a composer who in his lifetime was classed with Mozart and Beethoven, and enjoyed international fame and admiration. Shelley is a master of the Classical–Romantic style and in his hands the music of Spohr, heard very little today, reveals a freshness and excitement which is utterly beguiling.

Spohr’s Piano Sonata and Rondoletto are paired with works by George Onslow, Spohr’s exact contemporary. Both composers wrote very little piano music and this release comprises all their major works for the instrument. Again, music to charm and delight is rediscovered through Shelley’s expert performances.

‘Shelley plays this music with consummate artistry, making light of its technical difficulties and investing it with all the Romantic charm and ardour it needs. It's captured in excellent quality sound’ (BBC Music Magazine)

‘Spohr's piano sonata is rarely heard and there is much to commend in it … a work that is lyrically and melodically dominated throughout, and with some ravishing modulations among its highlights … Onslow's works are well deserving of an audience … the Toccata is very enjoyable … once again, Shelley has done us a service in resurrecting long-forgotten works and performing them with such consummate skill and good taste. The notes and Hyperion's recording quality are of an exemplary standard’ (International Record Review)
‘Shelley, who as a conductor has recorded all of Spohr's symphonies, plays this music masterfully. Hyperion's recording is faultless. What's not to like?’ (Fanfare, USA)

’Now that Mendelssohn is dead, Spohr holds the position of the first composer of the day, without a possible rival. No master has done more to advance the art in the highest department of composition, and as he has produced master-pieces in every style, his genius may be pronounced universal.’ This lofty verdict of The Morning Chronicle in May 1848, a product of the Victorians’ obsessive desire to rank and classify, now seems absurdly myopic. Yet to the majority of musicians and music-lovers in mid-nineteenth-century Britain and Germany (though not in France), Louis Spohr was an undisputed genius, the sole surviving standard-bearer of the great Classical tradition, and a bulwark against the dangerously subversive strains of Berlioz, Liszt et al. When Spohr died in 1859, aged seventy-five, Brahms mourned him as the last representative of a saner, more wholesome age. By then his stock was already on the wane. Yet a quarter of a century later W S Gilbert could still pen the celebrated lines in The Mikado: ‘Of masses and fugues and “ops” / By Bach, interwoven / With Spohr and Beethoven, / At classical Monday Pops.’

Although only the most fanatical partisan would now mention Spohr in the same breath as Mozart—his self-confessed ‘ideal’—and Beethoven, his clarinet concertos and the best of his chamber works, especially the Octet and Nonet, have a foothold in the repertoire, for their melodic and harmonic piquancy and their unfailingly suave craftsmanship. His symphonies, string quartets and double quartets have also staged a modest comeback. And while it would be disingenuous to claim his piano sonata as an unearthed masterpiece, it is music of gentle, unpretentious charm, and occasionally rather more than that.

Before he became internationally famous as a composer, Spohr had made his name as one of the greatest violinists of his generation, a German rival to Paganini. His keyboard technique, though, was rudimentary, and he initially regarded the piano as a mere salon instrument. After hearing the latest English Broadwoods in London in 1820 he relented, and composed a Quintet for Piano and Wind, with the keyboard part fashioned for his first wife Dorette, who for health reasons had had to abandon her career as a harpist. Chopin pronounced the quintet ‘beautiful’, but complained that it was awkwardly written for the piano, with no understanding of fingering. Only after Spohr had married the twenty-eight-year-old Marianne Pfeiffer in January 1836, following Dorette’s death, was his interest in the piano re-kindled. As he recalled in his autobiography, he came to know many works for piano and violin through playing them with Marianne at their Kassel home; and over the next few years he wrote violin sonatas, piano trios and then, in 1843, his sole piano sonata, dedicated to Mendelssohn, who duly responded with a letter of warm appreciation. By now his writing for the instrument had become more idiomatic, with the fingering problems noted by Chopin ironed out.

For all the dizzying pyrotechnics of his violin works, Spohr’s was an essentially easy-going musical temperament. Written against the background of a minuet, the sonata’s opening Allegro moderato eschews strenuous thematic development for a succession of leisurely variants on the opening cantabile melody, interspersed with bouts of pirouetting virtuosity. The idiom may strike us as neo-Mozartian, spiced—perhaps decorated is a better word—with harmony more consistently chromatic than in Mozart. In some of Spohr’s works the chromaticism can become a cloying mannerism (Beethoven reportedly found his music ‘too rich in dissonances’). Here, though, the music retains a certain innocent freshness. But the range of modulation is enterprising, as ever with Spohr; and there is a beautiful moment in the coda where the music dips, with a sudden pianissimo, from A flat to a rich and strange F flat: a modulation to the key of the ‘flat sixth’ familiar enough in late Haydn and in Beethoven, but here exquisitely timed and placed.

Titled Romanze, the slow movement is in essence a song without words. The plaintive, faintly Schubertian outer sections, in F minor, sound like a half-echo of a folk song, while the richly textured central episode, approached via a magical side-slipping modulation, is a bel canto aria re-imagined in pianistic terms. The C minor Scherzo, with its rhythmic teasing, quickfire key shifts (the second part flirts with the remoteness of E major) and quizzical pauses, seems to pay homage to both Haydn and Beethoven. Not for the only time in the sonata, the smooth, sonorous trio suggests the textures of a string quartet. Dominated by a playful theme that refuses to settle in the home key, the finale infuses country-dance rhythms with the spirit of a caprice, not least in the bold modulatory flights of the central development.

As a pendant to the sonata, Howard Shelley plays Spohr’s only other work for solo piano: a Rondoletto (i.e. ‘little rondo’), whose tripping outer sections enclose a minor-keyed central episode that recalls Mendelssohn in agitato vein. Spohr wrote this engaging salon piece in 1848 in response to a request from Charlotte Moscheles (wife of the famous composer–pianist Ignaz Moscheles) for a contribution to an album of piano miniatures that was never published.

Born in Clermont-Ferrand within months of Spohr, George (or Georges) Onslow is another Classical–Romantic composer rated highly in his lifetime (he was even dubbed, flatteringly, ‘the French Beethoven’), only for his reputation to plummet after his death. Onslow’s background was colourful: his father, Edward Onslow, an MP from an aristocratic political family, was forced to flee England in 1781 to avoid prosecution for alleged homosexual acts. In France he quickly found his feet, marrying a French aristocrat from the Auvergne, Marie de Bourdeilles, and investing in property in the Clermont-Ferrand region.

As a boy of noble family George was trained in the arts of fencing, horsemanship and hunting (a favourite pursuit until, in 1829, a stray bullet rendered him deaf in one ear), as well as music. Although details of his early years are sketchy, he seems to have arrived in London around 1800, after the Terror had forced his family to flee first to Rotterdam, then to Hamburg. George took keyboard lessons with J L Dussek and J B Cramer in London, then apparently spent a period in Germany and Austria. Back in his native Auvergne, he studied the cello and composed his first works in 1806–7: a set of three string quintets with two cellos, and his sole piano sonata, published in Paris as his Opus 2 and dedicated to ‘Miss Charlotte Onslow’—i.e. his cousin, Georgina Charlotte Onslow. Over the next four decades this gentleman farmer-cum-composer would make his name in France and Germany (where his admirers included Robert Schumann) primarily through his prolific output of some seventy quartets and quintets: a rare example of a French composer devoting himself to these quintessentially Teutonic genres.

By 1807 Onslow may well have known Beethoven’s two C minor sonatas from the 1790s, Op 10 No 1 and the ‘Pathétique’, Op 13. But there is little of Beethoven’s rhetorical vehemence in his own C minor sonata, where the turbulence associated with the minor mode c1800 is tempered by aristocratic good taste. The first movement grows, Haydn-like, entirely from the stern, march-like theme announced at the outset. Worked in canonic imitation, it then turns up in playfully decorative guise as a second subject. Onslow draws further meanings from this fertile theme in the widely modulating development, culminating in an exciting, protracted crescendo over a bass pedal. The recapitulation begins in C major, with the playful version of the theme, then quickly slips back to C minor. But C major has the last word, with the main theme sounding softly in the bass before the music disappears mysteriously into the depths.

Canonic writing is also a prominent feature of the C minor minuet, whose flicking grace-notes give a pungent kick to the rhythm. In the second part the gliding chromaticisms and minor/major equivocations sound almost Schubertian, as does the delightful waltz-trio, spiced by irregular phrase lengths and hovering between A flat and F minor. For the third movement Onslow writes a set of five variations on a pensive slow march tune, offsetting the prevailing toccata-like brilliance with a grave minor-keyed variation, No 4. Despite passing squalls—not least in the final pages—the finale is a monothematic sonata-rondo in a lilting pastoral 6/8 metre that shares the canonic tendencies of the first movement and minuet. As in the opening Allegro, the coda presents the theme over a tremolo bass (Onslow here instructs the pianist to use both the soft and the sustaining pedal) before the music fades away in a downward flurry of arpeggios.

Four years after the C minor piano sonata, Onslow composed an entertaining ‘Caprice ou Toccata’ (as it was styled in the first edition), a test of leggiero playing at speed that refracts the spirit of a Baroque toccata (complete with hints of fugal texture) through an early Romantic prism. Could Schumann have remembered Onslow’s work when he came to write his own strikingly similar Toccata in the same key, Op 7, nearly two decades later?

The Six Pièces, published ‘in aid of the poor’ (Onslow was well known for his charitable work), date from the late 1840s, by which time he had been elected only the second honorary member of the Philharmonic Society of London (after Mendelssohn), and to the chair of the Institut de France, in preference to Berlioz! Destined for the amateur domestic market, these unassuming pieces are Onslow’s response to Mendelssohn’s hugely popular Songs without words. While most of them mine a vein of gentle, fireside sentimentality, No 4, in B flat minor, is an exquisitely tender valse triste that on a ‘blind’ test might easily be mistaken for Schubert.