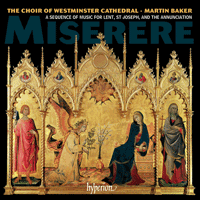 A sequence of music for Lent, St Joseph, and the Annunciation

This release from the admired Westminster Cathedral Choir demonstrates the splendours of the liturgy in the at-once solemn and joyful period of Lent. Masterworks from the Renaissance—familiar from Westminster Cathedral Choir’s previous award-winning recordings—alternate with works by former organists of the Cathedral (all themselves masters of liturgical composition) and are linked by the plainchant which is at the spiritual heart of the music. Hearing the music like this in context—and recorded in the unique acoustic of the Cathedral—perfectly replicates the live experience for the listener.

‘The choir is on excellent form and the recorded sound seems perfectly to capture a sense of place, of atmosphere’ (Gramophone)
‘This is an album for those who love the acoustic, the atmosphere and the traditions of the Roman Catholic Cathedral in London … the pacing and cohesion of the Agnus Dei of Palestrina's Missa Emendemus in melius is accomplished and moving, and their singing of plainsong with organ second-to-none’ (BBC Music Magazine)
‘The true musical spirit of the Lenten season … is to be found in the ancient antiphons, psalms and motets which have been part of the liturgical fabric of the season for centuries. This is what we have here, and an intensely beautiful CD it makes too … nobody could remain untouched by the profound beauty and timelessness of this music, and given these unaffected, sensitive and fluent performances from a choir which has been singing Lenten music in a liturgical context for decades, the result is something very special indeed … this is a beautifully devised programme, sung with ineffable perceptiveness by the Westminster choristers and recorded with utterly natural atmosphere by the Hyperion team’ (International Record Review)

Plainsong exists to solemnify the text that it adorns. Attende, Domine has its origins in the Mozarabic Rite of the tenth century and is one of the more emotionally complex melodies in the literature. It is classified by Solesmes dogma as a Lydian tune, although it is authentically Ionian. On the one hand the chant drives the physical momentum of litaneic procession, while on the other it colours the plangency of Lenten supplication. The aural hook of this hymn of exhortation comprises two consecutively occurring perfect fourths (heard at the beginning of the second phrase of the refrain). This descending medieval solecism occurs to great effect no fewer than eleven times, and since the nineteenth century this chant has beguiled the willing ears of Anglicans as well as those of Roman Catholics, as witnessed by the melody’s prominent inclusion in the English Hymnal of 1906 under the title ‘A Lent Prose’.

George Malcolm’s tenure as Master of Music at Westminster Cathedral between 1947 and 1959 was legendary. Malcolm fostered a ‘Continental’ sound (still very much in evidence today), which perfectly suits the choir’s core repertory. Malcolm’s Miserere mei, Deus is an alternatim setting of Psalm 51, the lynchpin of the Ash Wednesday liturgy. It switches between upper voices and lower voices in the unadorned chant of the second mode, as well as in Malcolm’s sonorous polyphonic expansion and variation of the chant. The setting ends with all voices joining for the second half of the ‘Gloria Patri’ in statuesque descant.

William Byrd’s five-voice setting of the Ash Wednesday motet Emendemus in melius was published in 1575 in the Cantiones sacrae, a publication issued jointly by Byrd and his supposed teacher Thomas Tallis. The collection includes seventeen motets by Tallis and seventeen by Byrd, and was published to celebrate the completion of the seventeenth year of Elizabeth I’s reign. Emendemus in melius is the fourth motet in the collection, but the first by Byrd (since Tallis, the more senior composer, provided the first three). This pole-position placement is testament to the affection that Byrd himself held for this masterly composition. The astonishingly uplifting part-writing at the words ‘et propter honorem’ honours not only the name of God, but also the monarch who sponsored the publication.

Palestrina’s Missa Emendemus in melius was published in 1594, the year of the composer’s death. The motet on which the Mass is based is not known, but from the character of the Mass’s music it can be surmised that the model was for four voices, concise, and harmonically taut. Palestrina’s artistry is nowhere more finely displayed than in the second Agnus Dei, where the texture expands from four to five voices in order to accommodate a carefully controlled canon at the fifth between bass and second tenor—art concealing art.

George Malcolm was an accomplished harpsichordist as well as a conductor and choir trainer, and consequently his knowledge of early music was extensive. In his luxuriantly textured setting of Scapulis suis for use at Mass on the First Sunday of Lent, Malcolm drew heavily on the style of late-Renaissance Continental polyphony, and seasoned it with twentieth-century nostalgic modality. This type of modality is also present in the organ hamonizations of plainchant that are a feature of the day-to-day liturgical work in Westminster Cathedral.

Audi, benigne conditor is a Dorian-mode office hymn for use at Vespers on the First Sunday of Lent—a remarkably affecting melody given its economical five-note range.

Giovanni Croce was fortunate enough to be associated with St Mark’s, Venice, in its heyday, but unfortunate enough to be overshadowed by his great contemporary Giovanni Gabrieli. Croce steered a safe path through the early years of the emerging Baroque era, and remained conservatively linked to the music of the Venetian old school as represented by Gabrieli’s uncle, Andrea. That said, Croce’s sacred music is never less than carefully assembled, and the directness of its text-setting and formal harmonic coherence make it frequently alluring, most obviously in In spiritu humilitatis by the inspired use of reverentially beautiful accented passing notes at the mention of the Lord’s name (‘Domine Deus’). In spiritu humilitatis is a model of humanistic humility, the two four-part choirs indulging variously in gentle dialogue and empathetic enjoinment.

The same reverence is evident in David Bevan’s expansion of the fourth-tone Magnificat. Renaissance root and branch provide the homophonic scaffolding, from which an ecclesiastically post-Romantic idiom vividly foliates.

Colin Mawby began his musical education as a chorister at Westminster Cathedral under George Malcolm. Mawby rose through the ranks of juvenile and adult assistant, eventually serving as Master of Music from 1961 to 1976. Mawby has written some uniquely effective music for the choir, and the macaronic anthem Iustus ut palma combines its English and Latin texts with the same alacrity as that with which Mawby fuses the textures of choir, baritone soloist, and organ—the cathedral’s grand organ was built by Henry Willis III between 1922 and 1932 and was overhauled and re-voiced by Harrison & Harrison in 1984 and 1996 respectively. The bedrock of Westminster Cathedral’s musical liturgy is plainchant, and its most glorious manifestation is when the ancient chant melodies are accompanied. Such treatment is entirely appropriate in this cathedral, founded as it was in late-Victorian England.

George Malcolm’s Veritas mea inhabits an atavistic soundworld. Grounded in neo-Renaissance modality, it absorbs the church harmonies of Bruckner and transforms them into a mixed-style creation of deep sincerity.

Credo IV (in contrast to its more famous counterpart, Credo III) springs from the fifteenth century rather than the seventeenth. But a singular compositional guiding hand is evident at the climax of the movement, where the resurrection is painted by stretching the range momentarily one degree higher. Credo IV is an article of faith, and a clear adaptation of an old melody to suit the early-modern taste for word painting.

Robert Parsons is primarily famous for two reasons: for mysteriously drowning in the River Trent when in his mid-thirties; and for composing the sublime five-voice motet Ave Maria. It seems probable that Parsons was a Roman Catholic, and his deeply personal setting of the Ave Maria (dating from the late 1560s) may have been offered as personal support for Mary Queen of Scots, who arrived in England in 1568, and who was deemed the true successor to the English crown by certain recusants. Certainly the inexorable stepwise ascent of the first six treble entries is more than usually assertive, and the majestically expansive ‘Amen’ has few equals, even from this Golden Age of English music.

Like Parsons’s Ave Maria, Francisco Guerrero’s five-voice Marian motet Ave virgo sanctissima was written in the 1560s. The Iberian fervour of Spanish Renaissance music is unmistakeable, and Guerrero ruled musical hearts and minds in late-sixteenth-century Seville. Ave virgo sanctissima employs a canon at the unison between the two treble parts, a feature which drives the music forward with each successive entry of the canonic voices. The masterstroke is Guerrero’s imitative use of the opening four notes of the solemn-tone Salve regina chant, which is triggered by the otherwise unrelated appearance of the word ‘Salve’. In the canonic upper voices the motif is heard three times, with increasing urgency, on the first, second, and fifth degrees of the mode.

Thomas Tallis wrote two settings of the compline hymn Te lucis ante terminum, both of which were published in the 1575 Cantiones sacrae. The first setting is recorded here, and—like the second—it sets only the middle of the three verses in polyphony. The treble part replicates the pitches of the pre-existent chant melody note for note (with the addition of a single ornamental leading note at the final cadence) in a lilting triple-time rhythm, and the accompanying harmonization is a model of economy and placid beauty, nowhere more so than at the delicately handled Picardian cadence at the end of the third phrase.

George Malcolm’s harmonization of the third-tone Nunc dimittis is an object lesson in spiritual minimalism. The unadorned chanting of the lower voices is answered by upper voices in simple three-part homophony, the harmony resolving into a quiet unison as Simeon’s soul slips gently into eternal rest.