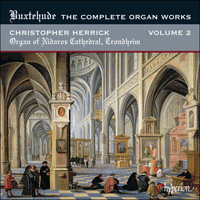 Christopher Herrick’s acclaimed series of Buxtehude’s complete organ works continues with a selection of his praeludia, toccatas, ostinato works, and canzonas, interspersed with chorale preludes and variations. For this disc he turns to the magnificent organ of Trondheim Cathedral in Norway, originally built by Joachim Wagner (1690–1749) and restored to its former baroque glory in 1994.

Highlights from this disc include the brilliant, flamboyant Praeludium in G minor, BuxWV149. Here, as so often in Buxtehude’s organ works, one can picture an organist seated at a console completely free of music and giving his imagination full rein. Also, the Chorale Fantasia on Te Deum, BuxWV218, the only plainsong-based work on this CD and one of Buxtehude’s longest and grandest works for organ.

‘The magnificent 1741 Wagner organ in Trondheim's Nidaros Cathedral. In possession of some pugnacious reeds and a thrilling 'pleno', it's an ideal choice for a disc which includes some big-boned praeludia as well as Buxtehude's most extended organ work: the imposing Fantasia on the Te Deum whose architectural acuity Herrick unfolds with magisterial authority … Herrick's flair for apposite registration illuminates at every turn … sonorously splendiferous’ (BBC Music Magazine)
‘The ambitions Te Deum and the grand Praeludium in C major confirm Buxtehude's inspiring originality. No wonder the young Bach once walked 200 miles to hear him play’ (The Observer)

Dieterich Buxtehude died in Lübeck, where he was Organist of the Marienkirche, on 9 May 1707. Neither the year nor the place of his birth can be stated with complete confidence, though the former is generally thought to have been 1637, and candidates for the latter can be reduced to a short-list comprising Helsingborg in Sweden, Helsingør in Denmark, and Oldesloe in Holstein. It seems certain, however, that he grew up in Denmark, and although he spent nearly forty of his seventy-odd years in the German city of Lübeck, and although ‘Buxtehude’ is a German place-name, no one begrudges the Danes their claim on him. Whatever the precise facts about his origins, it was in 1668 that he succeeded Franz Tunder (c1614–1667) as Organist of the Marienkirche, and by at least the turn of the century he was among the most influential figures in North German organ music. In 1705, having undertaken the long journey from Arnstadt to Lübeck especially to hear Buxtehude, J S Bach incurred his employers’ displeasure by unofficially extending his leave, so captivated was he by the older man’s playing. That Handel also visited Lübeck, in 1703, further underlines Buxtehude’s stature.

Everything heard on this disc is necessarily over 300 years old, but one can be confident that Bach and Handel encountered at the Marienkirche very little organ music from any earlier period. Much of what they heard was almost certainly improvised, and although improvisation continues to play a part in organ culture, printed music occupies an overwhelmingly dominant position (and much of it consists of careful editions of music written in the distant past, such as the works of Buxtehude and J S Bach). Buxtehude’s culture was quite different from that of today, and printed music played only a small part in it. Indeed, none of Buxtehude’s organ works was printed in his lifetime, and it was not until 1875, when Spitta’s edition began to appear, that they first became available otherwise than in the form of copies made by pupils and admirers. In Buxtehude’s day, printing could not cope with the increasing complexity of keyboard music, and transmission tended to be by hand-made copies. But Buxtehude’s culture was in any event one in which an important role was played by spontaneity. Carefully rehearsed performances of immaculately printed, long-pondered compositions played little or no part in it. Professional organists were required to be highly proficient in the art of improvisation, and it may be that some of the works recorded here, particularly the praeludia, were intended more as models for students of improvisation than as material for public performance; and so exhilarating is some of this music that one wonders how much more so Buxtehude’s ‘live’ improvisations must have been, for notation, no matter how sophisticated, cannot by its very nature capture every note and nuance of an inspired improvisatory flight: it may be that some of the works presented here do no more than hint at the grandeur by which Bach was so gripped.

The Praeludium in G minor, BuxWV149, is a typical example of the genre, flamboyant, improvisatory passages alternating with ones that are fugal and therefore strict in character. It opens with brilliant writing for the manuals, underpinned from the seventh bar by the pedals’ obsessive seven-note phrase. Here, as so often in Buxtehude’s organ works, one can picture an organist seated at a console completely free of music and giving his imagination full rein. This toccata-like opening is followed by a four-voice fugue, a brisk, largely manuals-only Allegro, and a further fugue, marked Largo, which runs into a free coda.

The Chorale Fantasia on the Te Deum, BuxWV218, the only plainsong-based work on this CD, is among Buxtehude’s longest and grandest works for organ. The first of its five sections is a short praeludium. The second begins with the melody’s opening phrase in long notes, each six-note group corresponding with the six syllables of ‘Te Deum laudamus’, and it continues with four-voice writing based on the notes that are sung to ‘te Dominum confitemur’. The long third section (‘Pleni sunt caeli et terra’) makes use of two manuals, much of it consisting of sprightly passagework directed to be played on the Rückpositiv and accompanied on the ‘O[rgel]’ or main division; and Buxtehude engineers ‘echo’ effects by the alternation of manuals. The fourth section, a trio, gives the pedals the notes associated with the section of text beginning ‘Te Martyrum’, and the fifth and final section begins with a fugal passage based on the notes that are sung to the words ‘Tu devicto mortis aculeo’. It continues with a further fugal passage, based on the last line of the melody: this is a kind of quadruple fugue, for each statement of the plainsong-based subject is accompanied by three counter-subjects. The fiery coda affirms the work’s Phrygian modality.

In the Chorale Prelude ‘Mensch, willt du leben seliglich’, BuxWV206, each line of the Lutheran melody is introduced by, and is the basis of, a brief passage of imitative writing, the melody itself, lightly embellished, being given to the uppermost voice and played on a separate manual.

The Praeludium in A minor, BuxWV153, begins with an extemporary section which draws to a close over a long pedal. Two fugues then follow, the subject of the first one making a feature of repeated notes, the subject of the second a compound-time variant of the first; and there is a brilliant coda in which at one point contrary motion produces harmony of a startlingly modern-sounding kind.

The Chorale Prelude on ‘Komm, heiliger Geist, Herre Gott’, BuxWV199, demonstrates the same basic approach as that adopted in ‘Mensch, willt du leben seliglich’: the melody is treated line by line, each embellished and separated from the others by a brief interlude. The work winds down over a dominant and then a tonic pedal, and Buxtehude closes as he began, with a rising scale.

The Chorale Variations on ‘Nimm von uns, Herr, du treuer Gott’, BuxWV207, comprise four ‘verses’ based on a melody familiar from its association with ‘Vater unser im Himmelreich’. The first verse, for manuals alone, has the chorale melody at the top of a three-voice texture. The second is a bicinium, the melody given again to the top voice but now accompanied by a single line of notes. The pedals are added for the third verse, in which the melody is treated in the manner of ‘Komm, heiliger Geist, Herre Gott’, the right hand having an embellished version of it, the left hand and pedals a simple accompaniment. A two-voice texture is reverted to for the fourth and final verse, which is another bicinium.

The Toccata in G major, BuxWV165, is for manuals alone. Bars 1–37 provide an animated introduction; at bar 38 begins a three-voice fugal passage based on a subject consisting entirely of semiquavers; and after a further extemporary passage, Buxtehude writes a coda in which variety is provided by the insertion of a jig-like passage.

The Ciaccona in E minor, BuxWV160, is one of Buxtehude’s three ostinato works for organ, the others being the Ciaccona in C minor and the Passacaglia in D minor. Over the steady repetitions of a simple four-bar ground, quavers gradually give way to semiquavers, and at bar 41 the pedals drop out and the ground is varied rhythmically. The music becomes increasingly fantastic in character and almost suggests that, having grown tired of his chosen form, Buxtehude has strayed into free improvisation; but examination of the score reveals that the ground is ingeniously present throughout.

The Chorale Prelude ‘Wär Gott nicht mit uns diese Zeit’, BuxWV222, is a gently animated example of Buxtehude’s characteristically simple way of treating a melody: given as usual to the uppermost voice, it is broken up, lightly embellished, and simply accompanied, the accompanying voices introducing each line with a series of entries based on its initial notes.

The Chorale Prelude on ‘Wir danken dir, Herr Jesu Christ’, BuxWV224, is based on a melody familiar from J S Bach’s ‘Erschienen ist der herrliche Tag’, BWV629, one of the preludes of his Orgelbüchlein, and Buxtehude anticipates him by grasping from the outset how well it lends itself to imitative treatment, each line of the melody being part of a polyphonic web created by the other voices’ introductory material. The melody’s final note is extended into a rising scale, which reminds one of ‘Komm, heiliger Geist’.

The Toccata in D minor, BuxWV155, has the form of a praeludium, dramatic improvisatory passages alternating with polyphonic ones. Here, though, the first of the polyphonic sections is a kind of double fugue, its subject never heard without its counter-subject; and the second is a species of triple fugue, its subject invariably heard with two counter-subjects. This second subject includes a four-note figure comprising three semiquavers followed by a crotchet: Buxtehude gradually develops it, and by bar 100 it has begun to dominate the work. Its manifestation in the athletic pedal passages from bar 115 onwards provides a remarkable anticipation of J S Bach’s Toccata in F major, BWV540. Listening to the splendidly rhythmical music of bars 108–121, it is very hard to think that Bach did not know this work.

The Chorale Variations on ‘Nun lob, mein Seel, den Herren’, BuxWV213, comprise three ‘verses’. The first is a bicinium, the second has three voices, and the pedals are added for the third and given the melody.

With the Praeludium in C major, BuxWV138, Christopher Herrick brings this second volume to a close. Here Buxtehude comes near to the two-movement form associated with J S Bach, for instead of writing a sequence of movements in which free writing alternates with passages that are fugal in character, he follows his opening section with just one fugue and concludes with a coda which, although free, is too brief to be thought of as a separate movement. The first section is of the customary brilliant character. The second is based on a subject whose descending three-quaver ‘head’ enables its various entries to be recognized with relative ease; and in the coda, contrary motion again produces harmony of a kind that sounds remarkably modern.