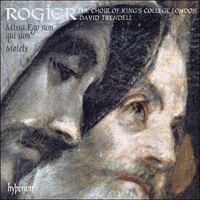 Although well known and highly regarded in his lifetime and in the years following his death in 1596, the music of Philippe Rogier is largely known (especially to English audiences) through one motet alone, Laboravi in gemitu meo. But there is much to explore in this genuinely underrated composer. Philippe Rogier was one of a long line of Flemish composers who worked at the Spanish court. The high regard that the musically astute Philip II held for Rogier was not misplaced, because he is one of the most fascinating and rewarding composers of the late sixteenth century: extraordinarily versatile, capable of plumbing the emotional depths in his penitential works (of which there are many) as well as exalting the heights in his festive music.

The main work on this disc includes the parody mass Missa Ego sum qui sum, based on a motet by Gombert. It must rank as one of the finest settings of the Mass ordinary of the late sixteenth century, dazzling in its invention and sheer beauty. Gombert had been one of the most influential composers of the post-Josquin period, developing a style of composition based on continuous imitation and almost relentless expressivity with an extraordinarily high level of dissonance. Rogier’s Mass seems to be a tribute to this style.

Two twelve-part accompanied motets are recorded here, pointing to a well-developed polychoral tradition at the Spanish court. The remaining motets on this recording represent different facets of the composer: desperate cries in the pentitential works and sheer exuberance in Cantantibus organis, a motet in honour of St Cecilia.

The much admired choir of King’s College London and their director David Trendell appear in their Hyperion debut.

‘This is choral singing to a professional standard, and the choir makes light work of Rogier’s adventurous harmonies. As I mentioned, their articulation of the rhythms is impeccable, and their clear and unified sense of phrasing is expressed through subtle and wholly appropriate dynamic gradation. All in all, this sounds like a promising start to a collaboration between a choir worth hearing more of and a record label with an excellent track record of promoting such ensembles’ (MusicWeb International)» More

‘Rogier, honour, glory and light of Flanders …
left this life in the flower of his genius,
depriving us of our sweet Orpheus’

Thus wrote the Spanish poet and playwright Lope de Vega in his poem Laurel de Apolo in 1630. Although evidently well known and highly regarded in his lifetime and in the years following his death in 1596, the music of Philippe Rogier is largely known (especially to English audiences) through a motet, Laboravi in gemitu meo, that exists in two early seventeenth-century English manuscripts, the Tristitiae remedium compiled by Thomas Myriell in 1616 (British Library Add, MSS 29372–7) and a manuscript in the Bodleian Library in Oxford (MSS Mus. F 1–6) dating from the 1630s. However, in both manuscripts the motet is ascribed to Thomas Morley. Quite how Morley came across this work is unknown, but he was evidently taken with it, even though he did ‘edit’ it somewhat, excising a few bars here and there. In fact, Rogier’s motet, or perhaps Morley’s version of it, seems to have proved very popular in England—there is a setting of the same text by Thomas Weelkes, scored for the same combination of six voices and remarkably similar in its melismatic effulgence.

Philippe Rogier was one of a long line of Flemish composers who worked at the Spanish court. He arrived in Madrid in 1572 as one of the choirboys who had been recruited from the Low Countries by Geert van Turnhout, Philip II’s maestro de capilla. He seems to have remained in Spain for the rest of his short life, becoming assistant to George de La Hèle in 1584 before succeeding him on his death in 1586. Rogier was well provided for by Philip II, having non-residential appointments at the church of Notre Dame in Yvoir and Tournai Cathedral as well a pension from the Bishop of León. The high regard that the musically astute Philip II held for Rogier was not misplaced, because he is one of the most fascinating and rewarding composers of the late sixteenth century: extraordinarily versatile, capable of plumbing the emotional depths in his penitential works (of which there are many) as well as exalting the heights in his festive music. He also seems to have been remarkably prolific. The library of King João IV of Portugal, destroyed by the Lisbon earthquake of 1755, contained 243 works by Rogier, including 8 Masses and 66 motets as well as a variety of other liturgical music, chansons and villancicos.

What survives of his music today is largely found in the following sources: a book of Masses published posthumously by Rogier’s student Géry de Ghersem in 1598, a book of motets published in Naples in 1595, and a number of motets in a choirbook in the library at El Escorial, where they appear alongside works by Palestrina and Morales. In addition, there is a large amount of instrumental music that Douglas Kirk has discovered associated with the church of San Pedro in Lerma, and the two twelve-part motets Videntes stellam and Verbum caro are found in the library of Segovia Cathedral (the latter is also in the El Escorial archive) in copies that seem to date from the late seventeenth century. These two motets are particularly interesting as they point to a well-developed polychoral tradition at the Spanish court. The first choir, which in both motets sings the verses, is accompanied by a harp continuo, whilst the two other choirs were plainly accompanied by instruments (the bass parts are often lacking text) as well by an organ continuo. Both works start with a slow-moving introductory statement from the first choir before exploding into fast-moving antiphonal effects. Especially effective are the places where all twelve voices are heard in spacious but decorative homophony.

Rogier’s Missa Ego sum qui sum is a parody Mass, based on an Eastertide motet by one of his predecessors at the Spanish Habsburg court, Nicolas Gombert (who had been in the employ of Charles V). It must rank as one of the finest settings of the Mass ordinary of the late sixteenth century, dazzling in its invention and sheer beauty. Gombert had been one of the most influential composers of the post-Josquin period, developing a style of composition based on continuous imitation and almost relentless expressivity with an extraordinarily high level of dissonance. Rogier’s Mass seems to be a tribute to this style rather than being heavily reliant on the actual motet. In fact, Rogier merely takes his points of imitation from Gombert’s motet, but the spirit of Gombert lives on through the surprisingly high incidence, for this date, of false relations (specifically notated in the source) as well as the large number and wide variety of suspensions. One of the most interesting features of this Mass is a sequence that occurs towards the end of each movment (except the Sanctus). Consisting of a series of descending fourths, it is remarkably similar to sequential patterns that occur towards the end of some of Gombert’s chansons (it is also found in some of Rogier’s other Masses, such as the Missa Inclita stirps Jesse). The effect of this sequence is highly expressive since it opens the music up and provides a fitting culmination to the contrapuntal ingenuity of each movement. Most notable perhaps is the Agnus Dei. Here the sequence is stated three times, the last of which has the bass initially rising rather than falling—a magnificent twist in a movement that is the emotional climax of the Mass. What is also interesting about this sequence is that something very similar occurs throughout Monteverdi’s Missa In illo tempore, published in 1610. This Mass is also based on a six-part motet by Gombert and the almost obsessive use of this sequence on the descending fourth must have owed something to Rogier. Thus does Rogier perhaps emerge as a more influential figure than hitherto thought.

Although we lack documentary verification, it is likely that Rogier knew the music of his Spanish contemporaries, especially Victoria and Alonso Lobo, for his music shares some of the intensity that we associate with these figures. Like them, his six-part writing is genuinely contrapuntal (Palestrina, say, tends to write more antiphonally when employing more than five parts) which results in very rich textures (listen, for example, to the end of the Credo). Only at certain doctrinally important moments of the text, such as the wonderful setting of the ‘Et incarnatus est’ passage in the Credo, does Rogier write homophonically, although he reduces the texture to four parts occasionally, such as in the Credo’s ‘Crucifixus’ section or the hauntingly ethereal Benedictus.

The remaining motets on this recording are from the 1595 publication and represent different facets of the composer. The penintential motet Caligaverunt oculi mei shows Rogier’s predilection for unusual dissonances as well as for some striking use of accidentals. The very opening alto line moves through a perfect fifth but with a prominent melodic tritone en route, whilst the use of accidentals at the words ‘a fletu meo’ leads to some unexpected suspensions. There is a wonderful harmonic shift of a third before the words ‘quia elongatus est a me’ whilst the second part starts with the distinctive harmonic interval of a dimished fourth between the upper two voices on the words ‘qui consolabatur me’. The work ends with the plaintive cry to ‘see whether any grief can be compared to mine’.

Locutus sum in lingua mea continues the penitential theme, dwelling on a consideration of final things (‘Make known to me, Lord, my end, and what the number of my days is’) and is perhaps Rogier’s finest motet. Cast in two sections, the level of intensity as well as sense of climax is astonishing. The portrayal of the final things at the beginning is drawn out, with a long melisma on the word ‘finem’ that passes through all six voices. The almost glacial start of the motet’s secunda pars on the word ‘Veruntamen’ gives way to a more harrowing passage on the words ‘sed et frustra conturbatur’ (‘yet he bustles in vain’), the latter word set eventually to an angular, rising figure that seems to cry out in desperation. The work ends with a bitter exposal of man’s futility—‘he hoards riches, but does not know for whom they are gathered’.

Laboravi in gemitu meo is perhaps not so unremittingly bleak, but the flowing of tears is perfectly represented in the extensive melismatic writing. It too contains many dissonant suspensions, which are such a feature of Rogier’s style, as well as a number of passages that have this melismatic writing in parallel thirds, or even at one point in parallel first inversion chords. Such writing is also present in the motet in honour of St Cecilia, Cantantibus organis, but here the effect is one of sheer exuberance as the saint ‘sang in her heart to the Lord alone’.