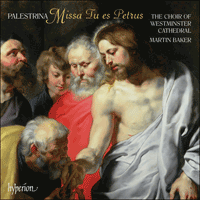 The celebrated Choir of Westminster Cathedral goes back to its roots with this recording of some of the towering masterpieces of Renaissance polyphony—a genre which the choir has made its own through the ritual of daily liturgical performance. Recent reviews have declared the choir to be at the peak of its powers, and this disc is an important celebration of a great musical tradition.

Palestrina’s Missa Te Deum laudamus, a paraphrase Mass based on the ancient chant, is recorded here with Victoria’s vibrant alternatim setting of the Te Deum. The Mass, like the chant on which it is based, is in the Phrygian mode, which in modern terms can be regarded as a modal form of E minor. Haberl, a late nineteenth-century editor of the complete works of Palestrina, commented that ‘this gives the Mass a certain severity of colouring, but [it is] full of holy fire’.

Missa Tu es Petrus is a parody Mass based closely on Palestrina’s own motet for the Feast of St Peter and St Paul (published in Rome in his second book of motets in 1572), from which a great deal of the musical material of the Mass is drawn. The motet, which precedes the Mass on this disc, is one of the most gloriously sunlit and uplifting pieces in all of Palestrina’s music, and its joyous splendour sets the tone for the Mass.

‘Works by two 16th-century masters of sacred music are here given sublime performances’ (The Daily Telegraph)
‘Westminster Cathedral Choir has had Palestrina coursing through its veins for generations and if anybody can make it sound real and vital for the passive listener, it can; and it does, with supreme success here … a truly absorbing experience, given the complete ease and naturalness with which this outstanding London choir performs this elevated music. It is, indeed, a rare listening pleasure’ (International Record Review)

This recording presents works by two major composers of polyphonic choral music who were active in the sixteenth century: Giovanni Pierluigi da Palestrina (1525/6–1594) and Tomás Luis de Victoria (1548–1611). Giovanni Pierluigi da Palestrina is thought to have been born in Palestrina, a town in the Sabine hills near Rome, and his first musical training seems to have been in Rome at S Maria Maggiore, where he was listed as a choirboy in October 1537. In October 1544 he was appointed as organist at the cathedral of S Agapito in Palestrina, where he remained until his appointment in 1551 as magister cantorum of the Cappella Giulia at St Peter’s in Rome. In 1554 Palestrina published his first book of Masses, dedicated to Pope Julius III. In January 1555 he was admitted to the Cappella Sistina, the Pope’s official chapel, on the orders of the Pope, without examination and despite being married. Three months later Julius III died and was succeeded by Marcellus II, who in turn died within about three weeks. The next Pope, Paul IV, insisted on full compliance with the chapel’s rule on the celibacy of its members and Palestrina, who had married in 1547 during his stay at Palestrina, and two others were dismissed from the choir in September 1555. In the following month Palestrina was appointed maestro di cappella at S Giovanni Laterano where he stayed until 1560, when he had a dispute with the chapter over the financing of the musicians. His next known employment was again at S Maria Maggiore, where he passed the next five years combining this post, between 1564 and 1566, with work for Cardinal Ippolito II d’Este. The latter work he continued on a more or less full-time basis until 1571, during which time he also taught music at the Seminario Romano. In April 1571 he took up his last appointment and returned to the post of maestro of the Cappella Giulia, where he remained until his death.

Tomás Luis de Victoria, the greatest composer of the Spanish sixteenth-century ‘golden age’ of polyphonic music, was born in Avila in 1548 and died in Spain in 1611. In about 1558 became a choirboy in Avila Cathedral, where he received his earliest musical training. When his voice broke he was sent to the Collegium Germanicum at Rome where he was enrolled as a student in 1565. He was to spend the next twenty years in Rome, and he occupied a number of posts there of which the most important were at S Maria di Monserrato, the Collegium Germanicum, the Roman Seminary (where he succeeded Palestrina as maestro di cappella in 1571) and S Apollinare. In 1575 he took holy orders and three years later he was admitted to chaplaincy at S Girolamo della Carità. Around 1587 he left Italy and in that year took up an appointment in Spain as chaplain to the dowager Empress Maria at the Royal Convent for Barefoot Clarist Nuns, where he acted as maestro to the choir of priests and boys that was attached to the convent.

This recording contains two Masses by Palestrina. The first is the Missa Te Deum laudamus, set for SAATTB. The earliest known source of this Mass is a manuscript in the Papal Chapel, Codex 32, into which it was copied in 1585. Later included in Palestrina’s ninth book of Masses, published in Venice in 1599, the Mass, like the chant on which it is based, is in the Phrygian mode, which in modern terms can be regarded as a modal form of E minor. Haberl, a late nineteenth-century editor of the complete works of Palestrina, commented that ‘this gives the Mass a certain severity of colouring, but [it is] full of holy fire’. This is a paraphrase Mass, which means it is based on an existing chant, in this case the ‘Te Deum’, from which it draws some of its musical material, often as a source of melodic motifs. An example of this can be heard in the opening bars of the Kyrie where, in their first entry, the basses sing the notes to which the words ‘Te Deum laudamus’ are set in the first half verse of the chant.

The ‘Te Deum’ is a hymn of thanksgiving, the origins of which are thought to reach a long way back towards antiquity. The text is constructed from a number of complex and diverse elements, some of which are thought by scholars to point to an origin before the mid-fourth century. Nowadays this is a chant of praise to God which is sung at the end of Matins on Sundays or on Feast days, but it is known to have been used in earlier times as a processional chant, as the conclusion of a liturgical drama, for thanksgiving at the consecration of a Bishop, or to celebrate a battlefield victory. In his setting of the ‘Te Deum’ (published in Madrid in 1600) Victoria divides the text into thirty-one verses. These he sets in alternatim style with alternate verses set to chant and for the full choir. In verses 1–4 the text is constructed on a quasi-‘antiphonal’ basis (‘Tibi omnes angeli’—‘tibi caeli et universae potestates’—‘tibi cherubim et seraphim … proclamant’); verses 5–8 then insert slightly adapted words from the Sanctus of the Mass. In verses 9–12 the text reverts to the ‘antiphonal’ manner (‘Te gloriosus apostolorum …’—‘te prophetarum …’—‘te martyrum …’—‘Te per orbem …’). Verses 13–15 are thought to be a doxology inserted later into an earlier basic text. Then comes a section, beginning in verse 16, of praise for Christ (‘Tu, rex gloriae Christe’). In the last section a great deal of the text is derived from the Psalms. Thus verses 24 and 25 (‘Salvum fac populum tuum, Domine … / Et rege eos et extolle …’) are a prayer based on a text from Psalm 28: 9; verses 26 and 27 (‘Per singulos dies benedicimus te, / et laudamus nomen tuum in saeculum, et in saeculum saeculi’) borrow text adapted from Psalm 145: 2; and finally there is a distinct echo in the closing verse of the hymn of the words of Psalm 24: 2.

Less information is available about the melody for the ‘Te Deum’ chant. All the earliest sources of the text are without musical notation. It is not until the twelfth century that manuscripts containing musical indications of the chant are known, and scholars are still seeking precise early sources. Moving forward to more recent times, transcriptions, not always from completely specified sources, are available in the Solesmes edition, the Antiphonale Monasticum and the Liber usualis, which provide a working basis for performance of the whole hymn; the performance in the present recording of the ‘Te Deum’ is based on the solemn chant to be found in the Liber usualis. Victoria’s setting of the hymn, which provides choral music for all the even-numbered verses, is rather unusual for an alternatim composition in that virtually all the music he writes for the choral verses is in a non-fugal homophonic style. Nonetheless, he achieves great liveliness and variety by using shorter and longer note values to underline the rhythm of the words, by embellishing the approach to cadences, by well-chosen changes in vocal register, and by using predominantly a bright major tonality. This provides an excellent contrast to the more sombre mood of the chant.

The second Mass on this disc is the Missa Tu es Petrus, also in six parts but set for SSATBB. It was first published in 1887 by Haberl on the basis of transcriptions he made from manuscript sources in the Vatican Library. This is a parody Mass based closely on Palestrina’s own motet for the Feast of St Peter and St Paul (published in Rome in his second book of motets in 1572), from which a great deal of the musical material of the Mass is drawn, in places reproducing more or less verbatim the notes of the motet, particularly in the opening of most of the main movements of the Mass. The motet, which precedes the Mass in the recording, is written in a bright major tonality, and has a very clear antiphonal structure in which constantly varying combinations of voices pass phrases of the text back and forth to great effect, giving the whole a wonderfully joyous and uplifting quality. The Mass embodies much similar music, adapted of course to the words of the Mass, but also introduces new music using a more fugal style, sometimes with extensive passages of figuration, which enriches and widens the scope of the Mass.