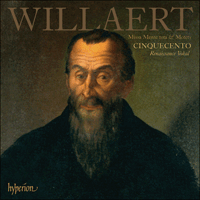 The all-male vocal ensemble Cinquecento have won great praise for their recordings of Renaissance rarities. Their tone, vocal flexibility, collective and individual musicianship and commitment to their chosen repertoire places them at the very forefront of modern-day specialists in this music.

Their latest disc features the music of Adrian Willaert, a contemporary of Josquin and for many years chapel master of the Venetian basilica di San Marco. Two extraordinary early works, Missa Mente tota and Quid non ebrietas, testify to the composer’s remarkable talent and love for complex contrapuntal constructions. Also included are four beautiful motets. The disc is completed by one of the many compositional tributes rained upon Willaert at his death: Cipriano de Rore’s Concordes adhibete animos, a suprisingly joyful posthumous panygeric containing an ostinato on the words ‘Live on Adrian, glory of the Muses’.

‘A dissonant motet on drunkenness and a hymn to the Holy Shroud … are among the treasures here, sung by the accomplished ensemble Cinquecento … a stimulating disc’ (The Observer)
‘A disc which combines one of the finest vocal ensembles in Europe currently at the height of its power with the richly scored and constantly inventive music of Adrian Willaert promises to be a revelation … the singing throughout is superbly blended, nuanced, tuned and expressive’ (Early Music Review)
‘A beautifully conceived and immaculately realised sequence, sung with simple directness by the six male voices of Cinquecento’ (The Guardian)
‘The magnificent Missa Mente tota … a tour de force … the fluidity and flexibilty of Cinquecento's sound means that every melodic line of the work is audible … their placement of chords, too, is absolutely precise, but the precision and suavity never come at the cost of passion—these singers know how to make abstruse polyphony sound genuinely exciting … this is a very fine disc indeed; I suspect that if Willaert could hear it he might think that he'd found his ideal performers’ (International Record Review)

In his monumental treatise Le istitutioni harmoniche (Venice, 1558), Gioseffo Zarlino recounts an anecdote about his teacher Adrian Willaert (c1490–1562). As the story is indicative of Willaert’s early career, it is worth quoting in full:

I shall now relate what I have heard said many times about the most excellent Adrian Willaert, namely, that a motet for six voices, Verbum bonum et suave, sung under the name of Josquin in the Papal Chapel in Rome almost every feast of Our Lady, was considered one of the most beautiful compositions sung in those days. When Willaert came from Flanders to Rome at the time of Leo X and found himself at the place where this motet was being sung, he saw that it was ascribed to Josquin. When he said that it was his own, as it really was, so great was the malignity or (to put it more mildly) the ignorance of the singers, that they never wanted to sing it again.

Different things can be said about this story, which was long thought to be apocryphal. What is of course most striking, is the claim that Willaert’s six-voice motet went under the name of Josquin des Prez, the princeps musicorum of his time. Needless to say, this serves to underline the extraordinary quality of the piece, which was first printed in Ottaviano Petrucci’s collection Motetti de la corona (Fossombrone, 1519). Verbum bonum et suave contains a canon between Tenor and Quintus, the melody of which is based on the eponymous plainchant. The motet displays a dense texture that is only interrupted at the beginning of the secunda pars: on ‘Ave, solem genuisti’ (the fourth strophe of the Marian hymn) a duet of upper voices is imitated by the lowest ones. The sudden reduction of the voices, the characteristic rising fourth on ‘Ave’ and the general layout of the melody make one wonder whether this passage was meant as a subtle musical and textual reference to Josquin’s Ave Maria … virgo serena, one of the composer’s most popular and best-known pieces.

Another piece on this recording also has a clear connection with Josquin: Willaert’s six-voice Missa Mente tota is based on the quinta pars of the composer’s monumental cycle Vultum tuum deprecabuntur. Josquin wrote these motets during his period of activity in Milan in the 1480s. They can be linked with devotional practices of the Sforza rulers, as they are part of the repertoire of so-called motetti missales, to which other composers such as Loyset Compère and Gaspar van Weerbeke contributed. Such motet cycles were designed to replace the standard items of the Mass (Introit, Kyrie, Gloria, etc). Josquin’s four-voice Mente tota starts with motivic imitation between the voices; from ‘ideo ne despicias’ onwards the contrapuntal texture makes room for homophonic declamation, which guarantees a clear comprehension of the text. The alternation of duets for high and low voices with tutti passages not only creates variety, but also highlights the structure of the prayer.

Willaert’s Missa Mente tota only survives in manuscripts, which are currently preserved in Rome, Bologna, Treviso and Munich. The earliest of these sources—Vatican City, Cappella Sistina 16—dates from circa 1512 to 1517, which means that this Mass could be one of the composer’s earliest pieces. Willaert might have written it during his stay in Rome (c1514–1515), when he was in the service of Cardinal Ippolito I d’Este. The Vatican choirbook also contains a five-voice Mass by Antoine Févin based on the same model. Willaert’s composition displays a remarkable feature: every section of the Mass contains a double canon, which shows Willaert’s love for complex contrapuntal constructions even at this early age. The Benedictus and second Agnus Dei are for two voices; the Osanna and third Agnus Dei are written in tempus perfectum, thus creating a climactic effect. Zarlino briefly mentions Willaert’s Missa Mente tota in Book III, Chapter 66 of his Istitutioni harmoniche and praises the work for its ‘leggiadria’ (gracefulness).

Quid non ebrietas? is another early composition of Willaert’s. Its experimental nature has not only caused lively musicological debate, but the work was already subject to polemic at Willaert’s time. In a letter of May 1524, the Bolognese theorist Giovanni Spataro reports that Willaert had sent the work to Pope Leo X, whose singers had not been capable of deciphering and performing it. Quid non ebrietas? is indeed intended as a musical puzzle. The text is based on a passage in Horace’s Epistulae I, 5 and concerns the ‘miracle of drunkenness’, which ‘unlocks secrets’ (‘operta recludit’) and ‘teaches skills’ (‘addocet artes’). These words seem to have inspired Willaert to a compositional tour de force. The notation suggests that the work ends on a seventh D–E, which would have caused intolerable dissonance. However, Willaert conceived the Tenor in such a way that it runs through the complete circle of fifths via the successive addition of flats. This means that the final note E should actually be sung as E double flat, or D. Willaert’s Quid non ebrietas? can thus be considered a major contribution to the development of equal temperament.

O iubar, nostrae specimen salutis was published in Willaert’s Hymnorum musica (Venice, 1542). As the subtitle of this book indicates, the Hymns are arranged in accordance with the church calendar (‘secundum ordinem romanae ecclesiae’). It is thus rather surprising that the collection includes a Hymn for the Holy Shroud. Interestingly, the publication of O iubar took place only a decade after the Shroud had been seriously damaged by a fire in the Sainte Chapelle of Chambéry. After its repair by the Poor Clare nuns, the Shroud was taken to Italy for exhibitions in Turin, Milan and Vercelli. It is possible that Willaert composed the piece for one of those occasions. Although most of the Hymns in the collection are composed alternatim—one stanza being sung in plainsong, the next polyphonically and so on—O iubar is polyphonic throughout. Willaert creates variety by means of the number of voices—from a bicinium (third strophe) to six voices in the final strophe—and the treatment of the pre-existing melody: it can be cited literally in long note values, paraphrased or treated as a canon.

Although Willaert spent a long part of his life as chapel master of the Venetian basilica di San Marco, we know that he visited his native Flanders twice. His first visit, in 1542, left a compositional trace: the five-voice Laus tibi, sacra rubens celebrates the Holy Blood, the relic of which is kept in Bruges at the eponymous chapel. The motet is based on a poem by Stephanus Comes which was published in the collection Sylvula carminum, non minus docta quam iucunda (Bruges, 1544). The text is written in elegiac distichs and offers a brief survey of the history of the Holy Blood, from Christ’s crucifixion to its arrival in Bruges. It is a very expressive poem, both in terms of content and word-sound. In his setting, Willaert intensifies these qualities by effective musical means.

Creator omnium, Deus was published in 1554 by the Leuven music printer Pierre Phalèse as part of the Liber sextus cantionum sacrarum. The motet is based on the apocryphal biblical text Maccabees—the passage in question marks the beginning of the prayer of Nehemias (‘Creator of all things, God, dreadful and strong and just and merciful’). Willaert’s six-voice piece contains a canon at the lower fifth between Tenor primus and Tenor secundus, who quote the plainsong melody in long note values, thus clearly distinguishing the canon from the other voices. From ‘Da pacem, Domine’ onwards, the canonic voices use smaller note values and merge rhythmically with the other voices. Willaert’s Creator omnium, Deus was the model for a motet by Orlandus Lassus, which is also for six voices and carries a canon at the lower fifth.

When Willaert died in December 1562, he had served the Venetian basilica di San Marco for 35 years. During this time, the institution had gained a strong international reputation. It is therefore not surprising that Willaert’s death was lamented by no fewer than five composers: Giovanni Battista Conforti and Lorenzo Benvenuti each composed a madrigal, whereas Andrea Gabrieli and Willaert’s nephew Alvise lamented his death with a greghesca (a curious genre, the text of which is based on a mixture of Venetian dialect with Greek words). With his five-voice motet Concordes adhibete animos, Cipriano de Rore—Willaert’s fellow countryman and successor at Saint Mark’s—left a particular musical monument.

Although Rore’s motet carries the heading ‘in mortem Adriani Willaert’, nowhere in its text is grief for the loss of the deceased composer mentioned. The spirited exclamation ‘Vive Adriane decus Musarum, vive Adriane’ that stretches the length of the composition as a soggetto ostinato seems equally at odds with the stated occasion in the composition’s heading. Above all, the piece ends with a ‘joyful’ passage in tempus perfectum, which praises Willaert’s native region: ‘Felix quae hunc genuit Flandria in orbe virum’. Concordes adhibete animos should thus be interpreted as a posthumous panegyric rather than a lamento in the strict sense of the word. The style of Rore’s motet clearly suggests that he wished to uphold the memory of Willaert’s achievements and to guarantee the survival of his music.