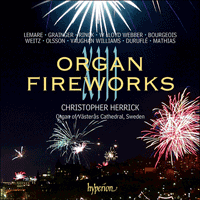 Christopher Herrick continues the Scandinavian leg of his endlessly popular Organ Fireworks series with a disc of music performed on the great organ of Västerås Cathedral in Sweden. The programme is, as ever, a tempting pot-pourri of pieces from around the world, some popular, some rare; some light-hearted and some serious, and demonstrating all facets of virtuoso writing for the organ.

Highlights include a contribution from a Swedish composer: Otto Olsson’s magnificent Introduction and Allegro ‘Credo in unum Deum’. Duruflé’s Choral Varié on Veni Creator is a work of immense grandeur and majesty, and the performance shows Herrick to be a master of the classic French idiom. The present day is represented by Derek Bourgeois, one of the most prolific of living composers writing for the organ. Vaughan Williams’ Prelude and Fugue in C minor displays a gritty, truculent brand of counterpoint that anticipates the dissonance and fury of his Symphony No 4 in F minor. William Mathias’s Recessional is a classic ‘Organ Fireworks’ number: an athletic display of quick-fire semiquavers alternating with march-like passages with a tramping bass, and ending with a colourful, crashing explosion of notes.

‘Herrick's playing and imaginative use of the organ's resources are first rate, and he's backed up by a superb recording from Hyperion’ (Gramophone)
‘This instrument makes a pretty spectacular noise … with plenty of incendiary reeds and pyrotechnic instruments, it provides yet another ideal organ on which Christopher Herrick can light his blue touch paper and not retire but leap onto the pyre and set off as many fireworks as he can in the space of 78 minutes … he is a fluent and fiery champion of the repertoire … Herrick manages to persuade us that it is all worth hearing. He delivers it with enthusiasm and the communicative zeal which is the hallmark of just about everything this outstanding organist ever seems to put his hands and feet to … for lovers of fine organ sound and often spine-tingly virtuoso playing … this disc most certainly is not thirteenth time unlucky’ (International Record Review)

A native of Belgium, Guy Weitz (1883–1970) studied in Paris with Guilmant, Widor and Vincent d’Indy and went on to become Professor of Organ at Liège. In 1914 the outbreak of war caused him to move to England, and after a few years’ association with the music of Westminster Cathedral, in 1917 he became organist of the Jesuit Church, Farm Street in London’s Mayfair, a post he held for some fifty years. His Grand chœur ‘Benedicamus Domino’, written in 1939 and based on a fifth-mode melody, is the first of the plainsong-based pieces in this programme. Fanfare-like chords are prominent in the opening section, and a brisk, one-in-a-bar fugue leads by way of a dominant pedal to the brilliant, toccata-like writing with which the work concludes.

Derek Bourgeois (b1941) was born in Kingston upon Thames and educated at Cambridge University and at the Royal College of Music, where he studied composition with Herbert Howells. The composer of forty-two symphonies, he is among the most prolific of present-day British composers, and his Prelude and Toccata, which dates from 2002, is one of a number of his works for the organ. The first movement is majestic and dark-hued, and even its major-mode second section is strongly coloured by chromatic harmony. The second movement is an energetic rondo based on a perky transformation of the melody heard at the beginning of the Prelude. A reminiscence of that movement’s major-mode material precedes the exuberant coda.

Johann Christian Heinrich Rinck (1770–1846) was born in Elgersburg, Thuringia, studied with J C Kittel (1732–1809), a pupil of J S Bach, and eventually became Kantor at the music school in Darmstadt, in which town he was court organist. He composed prolifically, and an organ primer of his enjoyed wide currency. Based on a tune made familiar by Mozart (K265) and generally associated with the words ‘Twinkle, twinkle, little star’, Rinck’s Variations and finale on ‘Ah, vous dirai-je, Maman’, Op 90, was published by Simrock in 1828. A minor-key introduction leads to a simple harmonization of the tune, and there then follow nine variations and a spirited finale, which takes the form of a fugato.

Born in Stockholm, Otto Olsson (1879–1964) was not only one of the great organ virtuosos of his day but also an important figure in the musical life of Sweden. The second plainsong-based work in this programme is the first movement, Introduction and Allegro, of his Credo symphoniacum, Op 50, an organ symphony written for the ecumenical meeting at Uppsala in 1925. All three of its movements are based on plainsong melodies, the first employing an example traditionally associated with the words ‘Credo in unum Deum’. Boldly announced in the movement’s opening bars and given to an inner voice in the sepulchral Molto adagio, the melody finds an exhilarating context in the Allegro. There are two points of repose, at which the melody is given a simple harmonization; after the second of these the movement proceeds to a magnificent conclusion—marked, quite pleonastically, Largamente.

William Lloyd Webber (1914–1982) seems destined to be remembered more for the achievements of his sons—Julian, the cellist, and Andrew, the composer—than for his own, but he played a prominent role in the musical establishment of his day—as administrator, composer, organist and teacher. Although it is not easy to assess his stature as a composer, his Dedication March, the work heard here, more than suggests a skilled, experienced hand. Dating from 1953, and possibly therefore connected in some way with the coronation of Queen Elizabeth II, it begins with cheerful, rhythmical music that puts one somewhat in mind of Eric Coates; but the winding, glowing lines of the melodious middle section suggest the influence of Elgar. The return of the opening material leads to a grand re-statement of the middle-section tune and then a coda in which the Tuba crowns the proceedings.

Edwin Lemare (1866–1934) was one of the outstanding recitalists of his day. After holding various London posts, he emigrated to America, where he is said to have commanded fees previous organists had only dreamt of. His many organ arrangements of orchestral scores are Lemare’s most enduring legacy (one thinks of his Wagner transcriptions and in particular that of the prelude to Die Meistersinger von Nürnberg, which Christopher Herrick included in Organ Fireworks VI) but he wrote a considerable number of original compositions, the best-known of which is undoubtedly his D flat major Andantino, which has come to be known as ‘Moonlight and Roses’. The Toccata and Fugue in D minor, Op 98, which is dedicated to William Faulkes and dates from 1923, shows Lemare in an altogether different mode. The brilliant first movement focuses obsessively on the material heard in its first few bars. The second begins with an exposition of almost textbook regularity. Derived from the Toccata, its lively second subject is the basis of a counter-exposition leading to a climax at which both subjects are thrillingly combined. A pedal cadenza precedes a coda which recalls the Toccata, and with a nod in the direction of J S Bach’s Toccata and Fugue in D minor, BWV565, Lemare ends on a minor chord.

A composer, folk-song collector and virtuoso pianist, Percy Aldridge Grainger (1882–1961) was born in Australia and studied in Frankfurt. In his Delius film, Ken Russell depicted Grainger as boyish and high-spirited, and the fact that much of his best-known music is jovial and immediately attractive has indeed caused him to seem something of a lightweight; but Grainger was a serious artist and brought to musical composition one of the most original minds of his day. Handel in the Strand, which he sub-titled Clog Dance, is the second of his Room-Music Tit-Bits, and its title and brisk harmonic pulse reflect Grainger’s admiration for Baroque music (which manifested itself most notoriously in his astonishing transcriptions of Bach). Themes emerge against a background of rapid, staccato chords: heard here in the arrangement by Wolfgang Stockmeier, the work proceeds good-naturedly to a boisterous conclusion.

Alone among major British composers of the twentieth century, Ralph Vaughan Williams (1872–1958) was a Fellow of the Royal College of Organists, having studied the instrument with Walter Parratt at the Royal College of Music and Alan Gray at Cambridge. In 1899, after a brief period as a church organist, he abandoned the organ-loft, but in the years immediately following the First World War he turned to the instrument again and wrote the well-known preludes on Welsh hymn-tunes (published in 1920) and the Prelude and Fugue in C minor. Although the latter dates from 1920–21, it was not published until 1930, when it appeared both as an orchestral work and as an organ piece. The ritornello-form first movement calls to mind the Prelude and Fugue in C minor, BWV546 of J S Bach. The fugue is in A–B–A form and based on a subject whose pentatonic outline seems like an augury of gentle pastoralism; but both movements display a gritty, truculent brand of counterpoint that anticipates the dissonance and fury of Vaughan Williams’s Symphony No 4 in F minor, the composition of which spanned the years 1931–4.

Born at Louviers, near Paris, Maurice Duruflé (1902–1986) received his initial training at Rouen Cathedral, studied with Paul Dukas at the Paris Conservatoire, and presided at the organ of St-Étienne-du-Mont from 1930 until 1975. Intended as an ‘affectueux hommage’ to Louis Vierne, his Prélude, Adagio et Choral varié sur le thème du ‘Veni Creator’, Op 4, was published in 1931. The last movement, Choral varié, is the one heard here and constitutes the third of this programme’s plainsong-based works. The first two movements are written in a manner somewhat reminiscent of the piano music of Debussy, the acoustics of a large building compensating for the absence of the sustaining pedal; but here Duruflé employs organ textures of a more traditional kind, and he begins by presenting the well-known Whitsuntide melody in rich, diatonic harmony. In the first variation, a plangent Nazard combination is heard against the dark tones of the Cromorne; in the second, the theme is heard on a limpid Flute, its notes enfolded in a delicate eight- and two-foot registration; and in the canonic third variation a luxurious string sonority underpins the theme. The fourth and final variation, a scintillating toccata, brings the work to a conclusion of immense grandeur.

The Welsh composer William Mathias (1934–1992) occupies a prominent position in the history of British organ music in the last third of the twentieth century. A non-organist without a Church of England background, he brought to the instrument a mind untrammelled by the Anglican organ-loft and a technique honed by the experience of composing for altogether different media. Although he wrote a number of large-scale organ works (one thinks in particular of the Partita, Op 19), he is perhaps best known among organists for those works of his, mostly postludes, that Oxford University Press included in their attractive albums of voluntaries. Published in 1986, much of Recessional, Op 96 No 4, consists of pattering, quick-fire semiquavers accompanied by rhythmical chords, many of them sevenths. March-like passages with a tramping bass provide a contrast to these athletics, and from time to time there are nods in the direction of Stravinsky’s Petrushka, especially near the end, where a bitonal cascade introduces the crashing final bars.