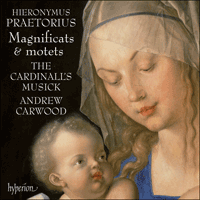 Hyperion is delighted to present a new disc from The Cardinall’s Musick under their inspirational director, Andrew Carwood.

The music of Hieronymus Praetorius is as assured, expressive and original as the Dürer image which adorns the CD cover. Yet this fine composer is much less well-known than his namesake (but not relation) Michael Praetorius.

Hieronymus Praetorius was organist of the Jacobikirche in Hamburg from 1586 until the end of his life. This somewhat sheltered background belies the sophisticated range of his works which are written in a variety of forms including the jubilant Venetian polychoral style. The composer’s highly individual voice, direct and yearning yet with a madrigalian lightness, pervades throughout.

Praetorius’s works were published in a number of editions during his lifetime. A collected edition of the sacred music of Hieronymus Praetorius was issued between the years of 1616 and 1625; this collection included hitherto unpublished music as well as reissues of already available works. The 1622 volume presents the most daring versions of many of the pieces recorded here and contains Praetorius’s second (and previously unpublished) Magnificat quinti toni (‘in the fifth tone’) to which are attached polyphonic arrangements of the popular medieval tunes Joseph, lieber Joseph mein and In dulci iubilo. This later setting of the fifth-tone Magnificat is Praetorius’s masterpiece.

The Cardinall’s Musick gives an impeccable yet delightfully extroverted performance of these fascinating works.

‘A superior festive selection box indeed’ (Gramophone)
‘The often highly expressive, sometimes quirky, and always well-crafted Magnificats and motets of Hieronymus Prateorius are a fine example of the strength-in-depth of German musical creativity. Andrew Carwood and The Cardinall's Musick ardently relish the interplay of voices in the eight-art scorings … the overall impression is compelling, fresh and immediate’ (Choir & Organ)
‘Their beautiful singing of such fine music deserves wide circulation’ (Early Music Review)
‘This superb disc … these are stunning performances, which is of course to be expected from this remarkable vocal ensemble … all are bathed in a richly texutred and highly variegated choral sound … Hieronymus Praetorius is considered by many to be one of the greatest North German composers of the first half of the seventeenth century. This release will surely go some way to convincing the rest of us of the truth of this assertion’ (International Record Review)
‘Hieronymus Praetorius gains his place in the sun with this outstanding release. The 16th-century organist and composer emerges as a master of vivid choral contrasts and effects’ (Classic FM Magazine)

Hieronymus (Jerome, Geronimo) Praetorius was born in 1560 in Hamburg where his father Jacob was organist at the Jacobikirche and the associated chapel of St Gertrud. When he was in his early twenties his father died and Hieronymus became organist, holding the post for the rest of his life. Between them, Praetorius father and son worked at the Jacobikirche in Hamburg for an uninterrupted period of seventy-five years. Only one composition by Praetorius senior survives (an unremarkable four-voice setting of the Te Deum). However, in the years immediately preceding and following Hieronymus’s birth, Jacob copied and compiled two large collections of German and Dutch church music. In addition to his teenage organ studies in Hamburg and Cologne, Hieronymus learnt the art and craft of music from studying the corpus of sacred music assembled by his father. Hieronymus in turn fathered four children, three of whom (Jacob, Michael, and Johannes) became church musicians. This Michael Praetorius (third son of Hieronymus) is not to be confused with the celebrated and prolific composer Michael Praetorius who, as it happens, did meet Hieronymus Praetorius in Gröningen in 1596; but other than that there is no connection between these two exceptional near contemporaries who happen to share the same surname.

The first published collection of music by Hieronymus Praetorius was printed in Hamburg in 1599. Gaudete omnes, O bone Jesu, O vos omnes, and Videns Dominus all first appeared in this collection. Three years later Praetorius published eight settings of the Magnificat, one in each of the eight tones. More of Praetorius’s church music was published in 1607, including Beatus auctor saeculi and the Oratio Dominica. A collected edition of the sacred music of Hieronymus Praetorius was issued in five volumes between the years of 1616 and 1625; this complete (or near-complete) collection included hitherto unpublished music (such as the 1618 issues of the Benedictio mensae and Laudate Dominum) as well as reissues of already available works. The 1622 volume presents the most daring versions of many of the pieces recorded here and contains Praetorius’s second (and previously unpublished) Magnificat quinti toni (‘in the fifth tone’) to which are attached polyphonic arrangements of the popular medieval tunes Joseph, lieber Joseph mein and In dulci iubilo. This later setting of the fifth-tone Magnificat is Praetorius’s masterpiece.

Gaudete omnes is an optimistic motet whose forward momentum is created by a fluent mixture of contrasting compositional styles. Closely woven six-voice imitative polyphony and agile madrigalian voice-exchange is balanced by solid homophonic writing, each section deftly linked to the previous one with the musical affect carefully chosen to suit the meaning of each phrase of the text. Throughout the motet, much of the listener’s attention is focused on the two upper voices which compete with each other during the imitative passages but sit comfortably together during the chordal sections. Praetorius shows such self-confidence in his mode of expression and in the clarity of word-setting that the contrapuntal mastery is easy to miss, not least in the Alleluia where the highest voice delivers an aurally arresting four-note statement which is the motif of the moment heard in inversion and augmentation. In contrast to the restless drive of Gaudete omnes, the six voices of O bone Jesu are combined in an indulgent texture that reflects the self-analysis of the opening words. Praetorius sustains a narrative which incorporates aggressive rhythms to depict self-blame (at ‘quod per culpam’), gently lilting, arching lines to portray nostalgic reminiscence (at ‘Memento’), and a bitter twist to what is ostensibly sweet harmony (at the first appearance of ‘dulcissime’). The desolation of Holy Week is convincingly painted in O vos omnes, although the opening is deliberately understated so that the sorrowful harmonies of the second half of the motet can appear to dominate. The Passiontide motet Videns Dominus is cast in a different mould altogether—eight voices are arranged in two equal choirs of four voices. Praetorius clearly enjoyed working in the polychoral medium (or strictly speaking bichoral in this case) which took recent developments from Venice as its starting point. The essence of this motet is disarmingly simple—the two choirs separately imitate or otherwise support each other until particularly important phrases within the text when both choirs join together (as, for instance, to great effect at Jesus’s calling of the name Lazarus).

The eight Magnificats of Praetorius’s 1602 publication are represented here by those in the second and fourth modes (hypodorian and hypophrygian respectively). Their structures are formulaic, yet Praetorius displays an impressive ability to build innovative musical architecture using the strict scaffolding of the period. The even-numbered verses of the canticles are set polyphonically and bichorally in duple time while the odd-numbered verses are sung to the unadorned plainchant of the relevant mode. The polyphonic verses take the notes of the chant as their starting point, and each verse is carried away with a flight of fancy based as much on the speech-rhythm of the words as on their meaning. Both Glorias are set entirely polyphonically, the fourth-tone Magnificat alternating between triple and duple time and the second-tone Magnificat reserving its muscular triple-time section for the closing words ‘et in saecula saeculorum. Amen’.

Like the Magnificat settings, A solis ortus cardine / Beatus auctor saeculi alternates plainchant with polyphony, although in this case the polyphonic verses are based much more closely on the notes of the plainchant hymn than are the polyphonic verses of the Magnificats. The technique of using a plainchant melody stretched out in long notes in one of the lowest voice parts was part of a compositional tradition stretching back for hundreds of years. Praetorius uses the technique (albeit not entirely strictly) to lend an antique feel to this motet’s varied textures. Oratio Dominica (a setting of The Lord’s Prayer for eight voices alternating with plainchant) elongates the notes of the plainchant in the second voice down in the polyphonic texture. Praetorius thereby achieves a grand and static effect in this highly polished miniature.

Benedictio mensae and Laudate Dominum are settings of Psalm texts which show each side of the early-seventeenth-century musical coin respectively. Laudate Dominum is a predominantly Renaissance-influenced work where the seven-voice writing is infused with imitative and quasi-imitative polyphony. The motet possesses a grandeur that is achieved by underpinning the vigorous polyphony with gently old-fashioned dissonances whose function is to create a large acoustical effect from within the ensemble rather than relying upon the architecture of a large performance space to create a similar effect. By contrast, Benedictio mensae is a predominantly homophonic motet whose two choirs deliver the text (separately and in combination) with a clarity derived from a respect for natural word stress that was the ideal of the new Baroque practice.

Joseph, lieber Joseph mein and In dulci iubilo are two of the best known of all ecclesiastical medieval tunes (the melody of Joseph, lieber Joseph mein is also frequently sung to the Latin text ‘Resonet in laudibus’). Both are Christmas carols, both are in compound duple time, and both are macaronic in that they use a mixture of German and Latin words. Praetorius sets both pieces for eight voices, but whereas In dulci iubilo is scored for a single eight-voice choir, Joseph, lieber Joseph mein is written for two contrasting four-voice choirs (one comprising the four highest voices and the other the four lowest voices). In Germany, Joseph, lieber Joseph mein was associated with the cradle-rocking ceremony at Christmas Vespers—a priest would sit next to a cradle containing an effigy of the baby Jesus and would rock the cradle gently in time to the lilting rhythm of the music. Praetorius sets this text with enormous sensitivity, thoroughly in keeping with the carol’s liturgical function. The high point occurs where the top voice soars to the upper limit of its range with the clearly audible line ‘Hodie apparuit’ (‘Today has appeared’) in a majestic statement of the Christmas miracle. In dulci iubilo is more athletic in its presentation of the text. Syncopations and well-directed suspensions propel the music forward, while at the end of the sixth line of each verse one of the high voices is left singing on its own in what is clearly the act of an organist sharing a Christmas joke with his singers. Ebullient and fervent at the same time, In dulci iubilo fits perfectly within the monumental Magnificat quinti toni where the carol’s syncopated opening matches the canticle’s syncopation at the words ‘et sanctum nomen eius’ which occur immediately before the carol’s first appearance within the Magnificat. The Magnificat—like both carols—is set for eight voices, although its bichoral disposition is subtly different to that of Joseph, lieber Joseph mein. Word-painting is at a premium in the fifth-tone Magnificat. The music rejoices, is holy, is powerful, scatters, and sends empty away as the text requires. Most notably, Abraham is afforded unique respect through the use of resonant block chords which have the effect of freezing time and allowing the listener to connect directly with the Old Testament. The Gloria is symphonic, in the best sense of the word, with all the voices sounding together to create a climax of quite extraordinary power and finality.