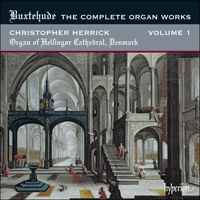 Dieterich Buxtehude was famously visited by J S Bach who walked from Arnstadt to Lübeck to hear him play. Bach stayed far longer than his employers expected, so captivated was he by the older man’s playing. That Handel also visited Lübeck, in 1703, further underlines Buxtehude’s stature.

The indefatigable Christopher Herrick has embarked on a complete series of Buxtehude’s organ music. The repertoire falls into two basic categories: free works, and works based on pre-existing melodies. To the first category belong the preludes and fugues, toccatas and fugues, ostinato works, and single-movement pieces such as the Fugue in C, BuxWV174. To the second belong the works based on chorale and plainsong melodies. A tantalizing selection of these is recorded here on the great organ of Helsingør Cathedral, Denmark.

Dieterich Buxtehude died in Lübeck, where he was Organist of the Marienkirche, on 9 May 1707. Neither the year nor the place of his birth can be stated with complete confidence, though the former is generally thought to have been 1637, and candidates for the latter can be reduced to a short-list comprising Helsingborg in Sweden, Helsingør in Denmark, and Oldesloe in Holstein. It seems certain, however, that he grew up in Denmark, and although he spent nearly forty of his seventy-odd years in the German city of Lübeck, and although ‘Buxtehude’ is a German place-name, no one begrudges the Danes their claim on him (a claim underlined by the choice of a Danish cathedral organ for this recording). Whatever the precise facts about his origins, it was in 1668 that he succeeded Franz Tunder (c1614–1667) as Organist of the Marienkirche, and by at least the turn of the century he was among the most influential figures in North German organ music. In 1705 J S Bach, having undertaken the journey from Arnstadt to Lübeck especially to hear Buxtehude, stayed far longer than his employers expected, so captivated was he by the older man’s playing. That Handel also visited Lübeck, in 1703, further underlines Buxtehude’s stature.

Everything heard on this disc is necessarily at least 300 years old, but one can be confident that on their visits to the Marienkirche Bach and Handel encountered very little organ music from any earlier period. Much of what they heard was almost certainly improvised, and although improvisation continues to play a part in organ culture, printed music occupies an overwhelmingly dominant position (and much of it consists of careful editions of music written in the distant past, such as the works of Buxtehude and J S Bach). Buxtehude’s culture was quite different from today’s. Printed music played only a small role in it. Indeed, none of Buxtehude’s organ works was printed during his lifetime, and it was not until 1875, when Spitta’s edition began to appear, that they first became available otherwise than in the form of manuscript copies made by pupils and admirers. In Buxtehude’s day, printing could not cope with the increasing complexity of keyboard music, and transmission tended to be by hand-made copies. But Buxtehude’s culture was in any event one in which spontaneity played an important part. Carefully rehearsed performances of carefully printed, long-pondered compositions played no part in it. Professional organists were required to be highly proficient in the art of improvisation, and it may be that some of the works recorded here, particularly the preludes and fugues, or praeludia, were intended not so much for public performance as models for would-be improvisers; and some of this music is so exhilarating as to make one wonder how much more so Buxtehude’s improvisations must have been, for notation, no matter how sophisticated, cannot by its very nature capture every note and nuance of an inspired improvisatory flight, and it may be that some of the works presented here do no more than hint at the grandeur by which Bach was so gripped.

The Praeludium in D major, BuxWV139 opens with a twenty-bar introduction whose extemporary style might suggest an organist exploring an unfamiliar instrument before settling to his task. There follows a four-voice fugue on a subject in which a repeated note prominently features; a sustained passage in which Buxtehude demonstrates a knowledge of complex harmony; and the lively, toccata-like section (interrupted by another sustained passage) with which the piece concludes. Thus ‘prelude and fugue’, the phrase commonly used to describe such works by Buxtehude, is not entirely apt, for instead of a clear-cut division into two substantial movements of more or less equal length, there is a succession of relatively short passages, strict fugal writing alternating with sections of an improvisatory character, some of them lively and harmonically straightforward, some stately and harmonically complex.

The Chorale Fantasia on ‘Nun freut euch, lieben Christen gmein’, BuxWV210 is based on Martin Luther’s Advent hymn (‘Be glad now all you Christian men’), published in about 1524; the melody is thought to have been derived by him from a secular source. The ten variations of this grand work accord with the ten verses of the hymn and deploy a fascinating variety of textures, metres and organ resources.

The melody of the Chorale Prelude ‘Ach Herr, mich armen Sünder’, BuxWV178 (‘Ah Lord, me, a poor sinner’) is familiar from J S Bach’s St Matthew Passion, and in the English-speaking world it evokes the words ‘O sacred head sore wounded’. It is given to the uppermost voice and skilfully embedded in a contrapuntal matrix based upon it, and although ornamented, its shape is well preserved throughout, which suggests that this is a prelude intended to introduce the singing of the hymn.

The Chorale Prelude ‘Von Gott will ich nicht lassen’, BuxWV221 (‘From God shall naught divide me’) is based on a melody, secular in origin, familiar to organists through Nicolas Lebègue’s Une vierge pucelle. Ludwig Hembold’s text dates from 1563. By contrast with the previous prelude, the melody drowns in rich ornamentation, so much so that the piece would be ineffective as an introduction to the singing of the hymn; but the almost incessant semiquavers make this among the most Bach-like of these preludes.

The Chorale Fantasia on ‘Ich dank dir schon durch deinen Sohn’, BuxWV195 is fundamentally different from the previous one on this disc (‘Nun freut euch, lieben Christen gmein’), its richly contrapuntal four-voice texture having origins in the vocal music of the sixteenth and seventeenth centuries. The four sections correspond with the four lines of the tune, each giving the relevant line a motet-like treatment.

The melody of the Chorale Prelude ‘Nun bitten wir den heiligen Geist’, BuxWV208 (‘Now let us beg true faith of the Holy Spirit’) is ornamented and given to the right hand, the left hand and feet providing a three-voice accompaniment. Although the previous chorale preludes on this disc appear to have been crafted on paper, there are suggestions here of origins in improvisation, and it is not hard, here and in the subsequent chorale preludes of a similar type, e.g. ‘Ein feste Burg’, to imagine a player in an improvisatory frame of mind embellishing the melody and providing a relatively simple accompaniment of the kind found here.

The Praeludium in G minor, BuxWV150 has much in common with that in D major, BuxWV139, although it has three fugues instead of one. It begins with an improvisatory passage (here, though, of an imitative character and unfolding over a long tonic pedal) followed by a four-voice fugue; a sustained passage (introduced by a short pedal trill); and two more fugues, the first lively and short (its subject consisting almost entirely of semiquavers) the second more solid in character.

The Ciaccona in C minor, BuxWV159 is the first of three ostinato works in this complete survey of Buxtehude’s organ music, the others being the Ciaccona in E minor and the Passacaglia in D minor. Unfolding over a noble four-bar ground, this gravely beautiful, dance-like music occasionally calls to mind similar passages towards the beginning of Bach’s Passacaglia in C minor, BWV582. The composer achieves variety by causing the pedals to drop out from time to time and by ingeniously enveloping the ground in elaborate passagework for the manuals.

In the Toccata in F major, BuxWV157 Buxtehude comes close to the two-movement plan one associates with J S Bach. The first thirty-eight bars comprise the toccata, a magnificent affair of scale passages, repeated chords, and harmony of immense grandeur. At bar 39 there begins a four-voice fugue whose subject makes a feature of repetition (compare BuxWV139). There is a second exposition, in which the voices enter in a different order, and a third, in which there appears a new counter-subject made up of brilliant semiquavers. The coda is dominated by the first counter-subject.

The Chorale Variations on the Magnificat noni toni, BuxWV205 constitute the first of the plainsong-based preludes in this series of Buxtehude’s complete works, the melody being the ninth psalm tone, the tonus peregrinus. There are two verses, the first, vocal in character, having the melody (in long notes marked ‘tremolo’) in the pedals, the second a fantasia based on the melody’s first three notes (minims) to which Buxtehude adds a lively counter-subject (semiquavers).

The Praeludium in G major, BuxWV162 is a ‘prelude and fugue’ for manuals only. A fifteen-bar introduction leads to the first of the fugues, the subject of which is based on a descending figure. A short sustained passage is followed by the second fugue, a jolly, compound-time affair calling to mind the Fugue in C, BuxWV174; and a short extemporary coda rounds the work off.

The Chorale Variations on ‘Auf meinen lieben Gott’, BuxWV179 are based on a text by Jacob Regnart (‘In God, my faithful God, I trust, when dark my soul’) dating from 1574; Siegmund Weingärtner’s melody dates from 1609. The four movements are those of the classic Baroque suite—Allemande, Courante, Sarabande and Gigue—and in each of them the melody is ornamented and given to the uppermost voice.

The Chorale Prelude ‘Ein feste Burg ist unser Gott’, BuxWV184 is based on the melody associated with Luther’s paraphrase of Psalm 46 (‘God is our hope and strength: a very present help in trouble’). Thought to have been adapted by him from a plainsong source, it was published with the text in 1531. Richly ornamented, the melody is given as usual to the right hand, the relatively simple three-voice accompaniment to the left hand and feet.

The Praeludium in A major, BuxWV151 opens in typical extemporary style, in this case with exceptional brilliance. The first fugue is based on a subject featuring descending thirds and a counter-subject rising by step. There follows a sustained passage, before the work is brought to a close with a short, sturdy second fugue.