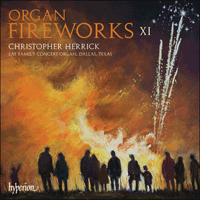 Our pyrotechnic world tour of organs continues apace. Fresh from Volume 10 recorded in Canada, Christopher Herrick now heads south to unleash the power of the Lay Family Concert Organ in Dallas, Texas. One of the largest mechanical concert organs ever built, this 4,535-pipe monster dominates the stage of the Eugene McDermott Concert Hall and proves the perfect vehicle for a wide-ranging programme of unabashed new-world swagger.

Alongside such iconic works as Copland’s Preamble (composed to mark the UN adoption of the Declaration of Human Rights) and the French Americana of Langlais and Widor we have a selection of jazz-infused works which allow both player and instrument to develop a whole new aspect of the organ repertoire. The programme concludes with Joseph Jongen’s epic Sonata eroïca, a veritable landmark in twentieth-century organ-writing and one which leads us out in a thunderous blaze of heroic bravura.

‘As we have come to expect from Christopher Herrick and Hyperion everything is done to the highest standard. The varied and exciting programme is convincingly played, making full use of the extensive tonal spread of the organ, whilst the accompanying programme notes are both comprehensive and interesting … another fine organ firework display, which I'm certain readers will enjoy’ (Cathedral Music)
‘Christopher Herrick is his usual inimitable self, combing a sense of fun with a spontaneous grandeur which is at times, totally arresting. The listener is also regaled with the impressive sound of the Lay Family Organ in Dallas, Texas, a 4535-pipe monster. Volume XII please?’ (Classical.net)
‘Some wonderful pieces to hear … the rich sounding recording makes the most of the fireworks’ (Essex Chronicle)

The ‘America’ theme of this programme is introduced right at the outset by the Preamble (for a Solemn Occasion) of Aaron Copland (1900–1990). He wrote the work in 1949 in response to a commission from the National Broadcasting Company, who wanted something to mark the United Nations’ adoption of the Declaration of Human Rights. In its original form it was for narrator and orchestra; the composer himself made this organ arrangement in 1953. The stark, arresting opening leads to gentle, sustained music that could be the work of no one but Copland. A section in D major, directed to be played dolce cantabile, contains a broad, chorale-like melody which, after further gentle, sustained music, is heard, fortissimo, in E flat major. The music broadens and concludes majestically in C major.

Edwin Lemare (1865–1934) was among the greatest recitalists of his day. He was for a time Organist of St Margaret’s, Westminster, where tradition has it that friction with the clergy (the result, no doubt, of his treating services as concerts) caused him to emigrate to America, where his playing commanded fees previously unimagined by organists. His many organ arrangements of orchestral music are Lemare’s most enduring legacy—one thinks of his Wagner transcriptions and in particular that of the Vorspiel to Die Meistersinger von Nürnberg (recorded by Christopher Herrick on Organ Fireworks VI, CDA66778)—but he wrote a considerable number of original compositions, of which his Andantino in D flat, generally referred to as ‘Moonlight and Roses’, is the best known. Dating from 1884, and introducing the ‘march’ theme of this programme, Lemare’s Marche moderne, Op 2, contains in its opening pages more than an echo of Die Meistersinger. The central trio section, marked cantabile, is of a lighter character: its restatement, on Full Organ, begins the magnificent coda.

The Glagolitic Mass of Leosv Janácek (1854–1928), one of the masterpieces of the choral repertoire, was written two years before the composer’s death. It comprises the usual sequence—Kyrie, Gloria, Credo, Sanctus and Agnus Dei—enclosed by movements for orchestra alone. The Organ Solo, which appears between the Agnus Dei and the final orchestral movement, is a veritable storm of organ tone: it features brief melodic phrases heard over the remorseless grinding of a ten-note pedal ostinato.

Jean Langlais (1907–1991), like César Franck, was Organist of Ste-Clotilde, Paris, and much of his vast output, as one might expect of a Roman Catholic organist, is based on Gregorian melodies. His six American Folk-Hymn Settings, Op 231, are an unusual exception, and Battle Hymn of the Republic, marked Tempo di marcia, continues both the ‘march’ and ‘America’ themes of this programme. The opening is hesitant and sinister-sounding, but Langlais soon builds up to Full Organ, and there then follows an extemporization on certain features of the familiar melody. Only at the end, after the ‘sinister’ music is heard again, does the melody appear in its entirety, sounding triumphantly above the composer’s characteristically abrasive harmonies.

John Behnke (b1953) is a professor at Concordia University in Wisconsin, USA. His Go tell it on the mountain, which comes from a 2003 Bärenreiter collection entitled Jazz Inspirations for Organ, introduces the ‘blues’ theme of this programme. Marked ‘With a detached swing’, this brief number quickly works up to a fortissimo statement of the famous tune.

Composers of organ music have tended to highlight the instrument’s more colourful registers, and the trumpet stop has been an inspiration since at least the eighteenth century, when John Stanley and his contemporaries wrote movements for it. By the end of the nineteenth century, the mildly voiced trumpets of the Baroque organ had been supplanted by heavy-pressure examples, and these created a vogue for pieces in which their stentorian tones are heard against the rest of the organ. The Festive Trumpet Tune of David German (b1954), an American composer, belongs to this tradition and was written for the composer’s wedding. Its form is basically AABA plus a coda, the B section being in the relative minor (D minor), the coda featuring a key-shift up a semitone, from the F major of the A sections to the sparkle of F sharp major.

Matthias Nagel (b1958) held a post as Kirchenmusikdirektor in his native Germany until 2003, when he chose to embrace a freelance career as lecturer, composer and arranger. His Danke-Swingfüglein, a fughetta for the manuals only, is also from Jazz Inspirations for Organ.

Eugène Gigout (1844–1925), the second Parisian organist in this programme, succeeded Guilmant as professor of organ at the Paris Conservatoire. His Grand chœur dialogué, which is among his best-known works, exploits the exciting contrasts available between the various departments of a large organ. Here again the ‘march’ theme of this programme is underlined, for this is music of a bold and strongly rhythmical character. A central section for the manuals only provides respite from the grandeur of the opening and prepares for its re-introduction at the work’s thrilling conclusion.

Alexandre Guilmant (1837–1911), the third Parisian organist in this programme, was born in Boulogne and succeeded Widor as professor of organ at the Paris Conservatoire. From 1871 to 1901 he presided at Ste-Trinité, and he was a founder of the Schola Cantorum. As well as composing prolifically for the organ, he was a widely travelled recitalist, and his work as a musicologist did much to revive interest in French Baroque music. Guilmant’s eight substantial organ sonatas are represented here by Choral et Fugue, the last movement of the fifth, the Sonata in C minor, Op 80. Here again the ‘America’ theme continues, for this particular sonata was written in 1894, in the wake of Guilmant’s Chicago recitals the previous year, and its dedicatee, Clarence Eddy, was a friend from that city. The quiet opening statement of the chorale is immediately followed by the entry of the subject, and Guilmant proceeds to build up a fine fugue. The return of the chorale, in the subdominant, precedes the combination of chorale melody and fugue subject, and increasing animation leads first to a long dominant pedal and finally to the monumental coda with which the sonata draws to its overwhelming close.

Based in Stavanger, Norway, Mons Leidvin Takle (b1942) is an organist–composer who studied in Stockholm, Copenhagen and New York. Festmusikk stands at the end of his collection Våg å leve (‘Dare to live’), a set of extrovert, mostly jazz-inspired works (which includes the Blues Toccata recorded by Christopher Herrick on Organ Fireworks X, CDA67458). Some of this programme plants the listener on the parade-ground; some of it plunges him into the smoky depths of the jazz cellar; here, with repeated notes and chords, ostinato-like figures, and ever-increasing animation, he enjoys a tour of a superb fairground.

Charles-Marie Widor (1844–1937), the fourth Parisian organist in this programme, was at St-Sulpice from 1869 until 1933 and succeeded Franck as professor of organ at the Paris Conservatoire. He wrote not only ten organ symphonies but also a number of orchestral works, including two symphonies and two piano concertos. Marche américaine, Op 31, one of Widor’s shorter works for orchestra, is heard here in the arrangement for organ made in about 1939 by his younger Parisian contemporary Marcel Dupré. It is not generally known that Widor wrote a number of stage works and that there existed a lighter side to this formidable Frenchman. In spite of the title, here, surely, in this marvellously rhythmical music, and especially in the perky second theme, is something of the gaiety and high spirits one associates with Parisian theatre.

Educated at St John’s College, Cambridge, where he was organ scholar, Iain Farrington (b1977) is not only one of the leading organist–composers of his generation but a most accomplished pianist and transcriber as well. Fast Dance is from his seven-movement suite for organ Fiesta! The first movement, Celebration, was a birthday gift to Christopher Herrick (who included it in Organ Fireworks X, CDA67458), and Fast Dance, the fifth, is a grim, snarling toccata: its punchy rhythms and brilliant figurations drive it to a thrilling coda in which the pedals, making their first appearance, free the hands to articulate the stabbing chords that dominate the final bars.

The prelude on Die ganze Welt hast du uns überlassen (‘You have entrusted the whole world to our care’) by Hans-Martin Kiefer (b1956) is also from Jazz Inspirations for Organ. Based on a melody from the German Protestant hymn-book Evangelische Gesangbuch, in traditional blues fashion it features a louche ‘walking’ bass, syncopated left-hand chords, and some amazingly nimble passagework for the right hand.

Born in Liège, Joseph Jongen (1873–1953) spent most of his life in his native Belgium. His Sonata eroïca, Op 94, which dates from 1930 and bears a dedication to Joseph Bonnet, is not only his masterpiece but also a landmark in twentieth-century organ music. Following the example of Liszt’s Sonata in B minor, it is not, as the title might suggest, a multi-movement work but a magnificent single span in which a beautiful and ingenious melody (heard first on string-toned stops) is made the subject of variations which, growing in intensity and animation, conclude with a finely wrought fugato. Here again one thinks of Liszt, for although Jongen’s fugal writing is impeccable, he soon abandons the textbook in favour of the rhapsodic style of writing with which this work reaches its truly heroic conclusion; and with Jongen’s final, blazing chord, underpinned as it is by the same thunderous C sharp that opened Copland’s Preamble (for a Solemn Occasion), the programme comes full circle.