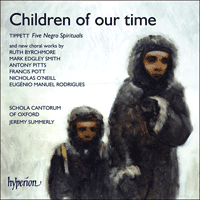 Children of our time

In 1978 Schola Cantorum of Oxford—the university’s acclaimed chamber choir—recorded Tippett’s Five Negro Spirituals from A child of our time. Sir Michael wrote, in his sleeve note accompanying the LP release on L’Oiseau Lyre (DSLO 25, re-issued on CD Belart 461 628-2, no longer available): ‘I had never heard the complete set till the recording sessions. I then realised that the sound of these songs when sung thus is quite different from their original settings in the oratorio. They became, as it were, the huge voice of a crowd of folk singing together. It should be clear from the above account of all the variety of pieces on this [all-Tippett] disc how remarkable and resilient a group of young singers the Schola Cantorum of Oxford is, under their equally young, gifted conductor Nicholas Cleobury.’

Some twenty years later, under Jeremy Summerly, the choir was asked to make a new recording of the Spirituals to mark the ninetieth birthday of the composer, by then the group’s long-standing Patron. This new disc—never previously released—is the result of those sessions, where the Tippett works are complemented by recordings of the winning entries in an international composition competition organized by the choir and other works written for it around the same time.

And what an astonishing display of choral pyrotechnics this produced. From the seductive intricacies of Mark Edgley Smith’s E E Cummings settings, through the blues-infused harmonies of Antony Pitts’s polychoral Thou knowest my lying down, to the extended genius of Francis Pott’s Amore langueo (containing what Summerly describes as ‘one of the great moments in English choral music from any period’), this new disc offers fascinating discoveries to the choral aficionado and seventy minutes of the very finest choral experience to all.

All works, apart from the Tippett and Pitts, are first recordings.

‘Here's a vital and beautifully performed collection of modern a cappella choral music from a most excellent choir with a considerable recording history … it's not a surprise that Mr Summerly and his choir can handle fiendishly difficult modern music with all of the skill, authority and pleasing sound they bring to early music. Hyperion comes through again with a superior booklet and enviable recording quality’ (American Record Guide)
‘This disc offers considerable rewards in an admittedly parochial field, and also preserves a delectable snap-shot of the Schola Cantorum of Oxford on outstanding form, over a decade ago’ (International Record Review)
‘You may confidently invest in this disc. Its musical rewards are ample’ (Fanfare, USA)

All of the music on this CD is connected in some way with the history of Schola Cantorum of Oxford. Sir Michael Tippett was one of Schola Cantorum’s patrons and his Five Negro Spirituals have been central to the repertoire of the choir since it was founded in 1960. Francis Pott’s Amore langueo was commissioned by Schola Cantorum for performance on its American tour during the fall of 1989. Antony Pitts was a singer in the choir at the time and his setting of verses from Psalm 139 was written in 1993. The works by Nicholas O’Neill, Mark Edgley Smith, and Eugénio Manuel Rodrigues were winning entries in Schola Cantorum’s International Composition Competition of 1994 which was undertaken with financial assistance from the Peter Moores Foundation and the Holst Foundation. Ruth Byrchmore’s In the silence of the night was commissioned by the choir in 1995 in order to be heard alongside all of these new works both in concert and on this recording.

Sir Michael Tippett was one of the giants of British twentieth-century music. Where other musicians compromised or faltered—in matters of politics, style, or self-expression—Tippett did not. But that, in itself, would not be enough to guarantee a composer’s place in history. Sir Michael, however, also involved himself unfailingly with any endeavour which spoke of honesty, realism, and nurture. Quite aside from his major contributions to the musical canon, Michael identified with modernity and respect for tradition in equal measure. In that sense Schola Cantorum of Oxford has never had a more endearing nor a more willing patron. This recording was intended as a ninetieth birthday tribute to Britain’s leading composer. Events overtook the CD’s release, however, and it is now offered as a posthumous testament to Tippett’s unfailing belief in the restorative power of new music, while also offering a performance of one of his greatest additions to the choral canon. In the oratorio A Child of our Time, the Five Negro Spirituals are not designed to be sung as a sequence. For that reason the five spirituals have been interwoven with the other pieces on this recording—pieces written by composers who were all born well after the composition of A Child of our Time and who could therefore collectively be described as ‘children of Sir Michael’s time’.

Tippett began his oratorio A Child of our Time as the Second World War broke out and its composition gave the composer a creative outlet for his pacifism (he was later imprisoned as a conscientious objector). Central to the oratorio are the Five Negro Spirituals which function in a similar manner to the chorales in Bach’s Passions. In 1958 Tippett extracted the spirituals from the oratorio and re-scored them for voices alone. The genius of these arrangements lies in Tippett’s ability to take orchestral accompaniments and to make them work as vocal lines. The effect is a grand one in which Tippett retains the directness of expression of the spirituals while lovingly adorning each one with musical gestures which were very much of his own time.

Thou knowest my lying down by Antony Pitts is the central panel of a triptych of Easter anthems for twelve voices. The twelve voices are subdivided into two: a higher group sings the complete text with a continuously rising chromatic scale on top of the texture, while a lower group elaborates a simple four-bar chaconne with a repeated ‘Hallelujah’. The conflict of these two ideas is worked out in harmonies that are sometimes transparently consonant, sometimes rich and strange. The soloistic vocal lines give shape to the overall rhythmic motion of the piece, converging from time to time like a giant wave rising out of the sea.

Ave verum corpus by Nicholas O’Neill is an eight-voice response to a celebrated sacred text which places the sacrament of Communion in the context of Christ’s death. The work grows from a single note which is gradually adorned by upper voices and is thereafter transformed into a motif which suggests its own static harmonies within the whole choir. Gradually the music paints the anguish of Christ’s suffering within the context of human redemption. However, although the music is ultimately optimistic, in that it starts and finishes at one with itself, the only other unisons within the motet occur at the words ‘homine’ (‘mankind’) and ‘examine’ (‘trial’).

Ruth Byrchmore’s In the silence of the night comprises three settings of poems by Christina Rossetti. Rossetti’s work has been a lifelong source of inspiration to Byrchmore, particularly in terms of its bleakness, passion, and integrity. The meditative, sparse, and slow unfolding of ‘Echo’ pours into the impassioned homophonic plea at the opening of ‘Song’. ‘Mirage’ adds a restless, linear full-stop to the whole.

While in most verse the poetic voice—although not necessarily identifiable—is at least single (or clearly divided in dialogue), the poetry of E E Cummings can give the impression in its more fractured and waywardly punctuated moments of two or more voices struggling to say different things at once. It was this built-in counterpoint while first led Mark Edgley Smith to consider setting Cummings’s poems chorally. The Five Madrigals to poems by e e cummings form a palindrome in terms of the style of the five movements. At the centre lies the simple lyric ‘love is more thicker than forget’ which was the first of the movements to be written. The description of these pieces as ‘madrigals’ may be taken (with a nod in the direction of sixteenth-century models) to indicate a more contrapuntal, virtuosic approach than might be suggested by the term ‘choruses’.

Eres … is a setting of a love poem (Testamento de Otoño) by the Chilean poet Pablo Neruda. The poem’s obvious parallel is with the Song of Songs in that it deals ecstatically with the appreciation of the human form in mundane and spiritual ways simultaneously. The minimalist setting by the Portuguese composer Eugénio Manuel Rodrigues is spacious and mysterious; it culminates in a representation of the wind passing through the branches of a tree.

Francis Pott’s Amore langueo is a large-scale work for unaccompanied double choir and solo vocal quartet. It sets a fifteenth-century English lyric with a Latin refrain—indeed the refrain ‘Amore langueo’ (‘I am faint with love’) underlies the majority of the music in the piece. In terms of its scoring there are obvious English precursors from the beginning of the twentieth century in Vaughan Williams’s Fantasia on a Theme by Thomas Tallis (for double string orchestra and string quartet) and Vaughan Williams’s Mass in G minor (also for double choir and solo vocal quartet). However, although the undulating harmonies of Amore langueo frequently share more in common with the music of Arnold Bax and E J Moeran than with Vaughan Williams, there is a clarity and transparency about the music that Pott gives to the solo quartet in particular that binds this intricate setting to some of the most simple and directly affecting English music of the twentieth century.