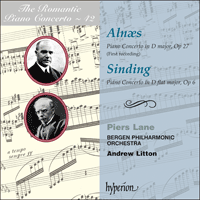 Hyperion’s record of the month of April is the forty-second release in our prestigious Romantic Piano Concerto series.

We went to Norway for this one—and rightly so as the recording reveals that there’s more to Norwegian Romantic Piano Concertos than Grieg in A minor. While Sinding is at least a name to most people (if only for The Rustle of Spring) Alnæs is almost completely unknown outside his native land, yet it is perhaps this latter’s concerto which makes the bigger impression. This is a glorious late romantic work in an idiom akin to Rachmaninov; indeed there are passages which seem to quote the Russian’s fourth concerto—except that the Alnæs was written first. Did Rachmaninov perhaps hear an early performance?

The Sinding is a monolithic three-movement work where all the material is based on one theme which undergoes many Lisztian transformations. The piece is hugely virtuosic, some may say bombastic—but some may also say that’s what this series is about—and it’s all good fun!

We’re delighted to continue our relationship with Andrew Litton as the new principal conductor of the Bergen Philharmonic and here he is joined by RPC stalwart Piers Lane in his sixth contribution to the series.

‘For the 42nd issue in its 'Romantic Piano Concerto' series, Hyperion turns for inspiration to Norway, and, in a first recording of Eyvind Alnæs's Concerto, they light up the sky like an aurora borealis … such music is heaven-sent, particularly when played by Piers Lane with such enviable poetry, fluency and aplomb. Few pianists could have entered into the romantic spirit more infectiously … Andrew Litton and the Bergen Philharmonic are a perfect foil for their scintillating and indefatigable soloist, and Hyperion's sound balance is impeccable’ (Gramophone)
‘Despite the obscurity of this music, Piers Lane plays it with confidence and insight. The Bergen Philharmonic, under its music director Andrew Litton, provides solid, stylish support and the recording is spacious and ideally balanced’ (The Daily Telegraph)
‘Piers Lane is tremendous, the Bergen Philharmonic Orchestra is splendid and both Lane and Andrew Litton find the perfect tone of delivery … the best of this work is very fine indeed. Lane is again excellent … and all the performers make excellent advocates for a work thoroughly deserving of them’ (International Record Review)
‘The performances, with Piers Lane as soloist and the Bergen Philharmonic conducted by Andrew Litton, are jaw-droppingly good—so much so that any qualms you may have about the works themselves are swept aside by the sheer excitement of it all’ (The Guardian)
‘This gorgeously romantic concerto is rich with the idiom which inspired Grieg. It's well realised by Piers Lane and the Bergen Philharmonic Orchestra under Andrew Litton’ (Liverpool Daily Post)
‘You're going to love this disc. It does everything this wonderful series of 'Romantic Piano Concertos' is supposed to: present captivating repertoire in excellent performances … Piers Lane plays both concertos with a confidence that belies their unfamiliarity, and you know that Andrew Litton and the Bergen orchestra will do their bit like real pros. Excellent sound completes the picture. A genuine find!’ (Classics Today)
„Sinding's 30-minute-long concerto blossoms here in a way that makes one long to experience the work live in the concert hall … its heroic nobility, dramatic projection of theatre and beautiful colouristic shifts make for genuinely uplifting listening … the new Hyperion recording will lead to more live performances of what is unquestionably a worthy, exciting and optimistic work“ (Piano, Germany)

Eyvind Alnæs (1872–1932) played an important role in the musical life of Oslo during the first part of the twentieth century. For thirty-seven years he was an organist in several churches, ending his days as organist and precentor at the cathedral in Oslo. At the beginning of the twentieth century it was still impossible to earn a living as a full-time church musician in Norway, so Alnæs supplemented his income by working in different musical fields. He conducted several choirs and also became the chairman of the Norwegian Composers’ Association and a member of the board of TONO, the Norwegian performing rights society. Alnæs was a renowned pianist and accompanist; as part of his piano and organ teaching he published piano and organ methods and practical collections of music.

Alnæs received his musical education at the private music conservatory in Oslo. He continued his studies in Leipzig, where he was taught composition by Carl Reinecke. After the premiere of his first symphony in 1896 he received a scholarship giving him the opportunity to study composition with Julius Ruthardt in Berlin. The first results of his time in Berlin were the Variations symphoniques for orchestra (1898) and several smaller piano pieces. A concert presenting his orchestral music in Leipzig in 1900 revealed his ambitions as a composer, but like Edvard Grieg he was forced to undertake a range of musical tasks which took up much of the time he could devote to composing. Twenty-four of his forty-five opuses are collections of songs, and Alnæs became one of Scandinavia’s most performed song composers. His piano music, which mostly consists of poetic miniatures, also has a dominant place in his output, demonstrating that Alnæs aimed to compose music that his publishers would find marketable. Alnæs also composed chamber and choral music, but after 1900 the piano concerto and the second symphony are the only works on a larger scale.

The Piano Concerto in D major, Op 27, and the two symphonies are composed in Classical forms with a late-Romantic harmonic style, placing Alnæs in the same tradition as Rubinstein and Rachmaninov. His colleague Gerhard Schjelderup characterized Alnæs in 1921 as a typical lyricist who did not develop new and individual methods. In Schjelderup’s opinion Alnæs was ‘a healthy and true musician, keeping both feet on the ground and remaining firmly within an expressive sphere accessible to his listeners’. Schjelderup described the piano music as empty and vacuous, but it is doubtful that he ever heard the piano concerto, which is a firework of life and energy, far removed from the cathedral organist’s weekly chorale improvisations on the organ.

The first movement, in a brilliant and shining D major, has a large-scale and impressive character reminiscent of Rachmaninov. Glittering virtuoso piano passages alternate with orchestral writing that—with its eight horns, six trombones, four trumpets and two bass tubas—has a Wagnerian force. In complete contrast, the second movement has a tragic character in the mood of a funeral march. A timpani roll à la Grieg then launches the listener into a delicious waltz, which in grace and vigour stands alongside Weber’s Aufforderung zum Tanz. The last movement is a tribute to the Viennese waltz and a splendid mixture of popular melody and virtuoso piano-writing that demands spontaneous applause.

Christian Sinding (1856–1941) descends from a family with several talented artists: Sinding’s brother Otto was a famous painter and his brother Stephan a well-known sculptor. Christian Sinding himself started his musical career as a violinist and played for a while in the Philharmonic Society in Oslo under the baton of the composer Johan Svendsen. While he continued his music studies in Leipzig some of Sinding’s compositions were performed, but they did not elicit a positive response from his friends at the conservatory. Not only this, but Sinding’s severe self-criticism led him to destroy many of his works. Between 1882 and 1884 Sinding studied in Munich, and following the more positive recognition he received there he concentrated fully on composing. This was only possible thanks to scholarships from the Norwegian government and private foundations, and a contract with the publisher Peters in Leipzig in 1892 was an important step in his struggle to earn a living from composing.

Sinding lived in Germany for almost forty years and forged strong links with German cultural life. In 1910 the Norwegian government offered him a state salary, and from 1924 he lived in the honorary residence Wergelandsgrotten near the King’s palace—a sign that he, alongside Grieg and Svendsen, was considered one of Norway’s foremost composers.

More than two-thirds of Sinding’s compositions are songs or piano music, works that were easy for his publishers to sell. Sinding made his international breakthrough with his Piano Quintet, which Ferruccio Busoni and the Brodsky Quartet premiered in 1885. The next works to arouse attention were the Variations in E flat minor for two pianos, Op 2, and the Piano Concerto in D flat major, Op 6 (1889, revised 1901). Nevertheless, it was not until he composed the piano piece Frühlingsrauschen (‘Rustle of Spring’, 1899) that he really became a world-famous composer. Frühlingsrauschen was reprinted in many editions and in the first half of the twentieth century was an international hit. It has been claimed that most of Sinding’s outstanding music was composed before 1900, but he also produced important works in later years—four symphonies, three violin concertos, chamber music and the Wagner-inspired opera Der heilige Berg (1914).

Sinding did not compose national Norwegian music in the same way as Grieg; there are very few examples in his music of the influence of Norwegian folk music. Sinding was more cosmopolitan and was influenced by composers including Liszt and Wagner. In the piano concerto he uses Classical forms, but the movements are bound together into a cyclic unity through their thematic interrelationships. Thus the main themes in the second and third movements are transformations of the opening theme of the first movement.

The first movement has three contrasting themes which are elaborated and combined in the development section. Formations of sequences create long arching lines, giving the music a monumental and heroic effect. The relationship of the main theme to the Gibichung-theme in the first scene of the first act in Wagner’s Götterdämmerung has not escaped some observant listeners. There are also associations with works by Tchaikovsky and Rubinstein, although these are likely to be the sharing of a common musical inheritance rather than deliberate reminiscences. Even the ‘Grieg leitmotif’ plays a role in the concerto. Ultimately, however, it is the impression of a well-integrated structure combining power and freshness that fully engages the listener.

In the second movement Andante, in E minor, a solo horn presents a minor-key version of the opening theme from the first movement and gives the whole movement a dreamy and meditative character. The sound of the horn, the minor tonality and the ‘Grieg leitmotif’ are among the reasons why contemporary German critics perceived in this movement the light and ‘Nordic’ sound characteristic of some of Sinding’s music. Gradually the music in the second movement is developed and reaches a new heroic stature. It is interesting to note at certain points how close Sinding’s music comes to Debussy, with his use of parallel triads, and to Sibelius, through a dark and densely coloured harmony and instrumentation. The two first movements of the concerto were premiered by Erika Nissen in 1889 in Oslo, as a contribution to Sinding’s application for a state grant.

Sinding struggled to finish the last movement, and before publishing the Concerto in 1890 he made extensive reworkings. In 1901 Sinding issued another version of the Concerto, with significant alterations to the last movement, affecting the harmony and structure. Elsewhere he also revised much of the piano-writing, without changing the orchestral parts or the underlying harmony and structure, in an attempt to clarify some of the more complex piano figurations and simplify the most intractable passagework. This recording follows the revised edition of 1901, but where it could be argued that Sinding’s desire to streamline the solo part resulted in the loss of worthwhile pianistic intricacies, Piers Lane has retained some elements of the piano-writing from the original 1890 version.