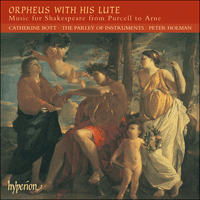 Orpheus with his lute

Music for Shakespeare from Purcell to Arne

This fiftieth release in Hyperion’s glorious ‘English Orpheus’ series takes us on a Shakespearean Odyssey through Titus Andronicus, Measure for Measure, Troilus and Cressida, Much Ado about Nothing, Henry VIII, Cymbeline, Love’s Labour’s Lost, A Midsummer Night’s Dream and The Tempest. Pride of place, of course, goes to Thomas Arne’s immortal settings, but the disc additionally explores some remarkable songs by his predecessors and contemporaries.

‘The Parley of Instruments, Rachel Brown, director Peter Holman and the Hyperion recording team all deserve applause’ (Gramophone)
‘With the programme arranged by play rather than chronology, creating an alluring stylistic variety within its 100-or-so-year span, and excellent sound, music for Shakespeare doesn't come much better than this’ (BBC Music Magazine)
‘I'm sure that if it wasn't for the pioneering series of recordings named The English Orpheus we would find ourselves less the richer for the discoveries this series has brought to our notions of English musical heritage’ (The Organ)
‘Programmed with Peter Holman's usual ingenuity and originality’ (Goldberg)

When Charles II returned to London in 1660 after his years of exile one of his first acts was to order the reopening of the theatres, closed since the beginning of the Civil War in 1642. The new theatrical order was rather different from the old. The king broke with tradition by taking a personal interest in the theatres, and by giving two companies under his patronage and that of the Duke of York a monopoly on theatrical activity in London – a situation that essentially persisted until the nineteenth century. The two companies also broke with tradition in the way they produced plays. Women appeared on the stage for the first time, replacing the boys of Shakespeare’s time, the theatres were equipped with changeable scenery and machines, and they now employed specialist singers and sizeable instrumental ensembles. From then and throughout the eighteenth century all plays were provided with music. At the very least, the instrumentalists would have entertained the audience before the play began and between the acts, in the Restoration period with specially composed suites, and later with Italianate sonatas and concertos. Vocal music ranged from single songs and catches to extended passages of operatic music. However, all-sung operas were largely the preserve of the Italian opera house in the Haymarket; in the English theatres speech mixed with music was the norm from 1660 until well into the nineteenth century.

Shakespeare was the foundation of the Restoration theatrical repertory. His plays were initially revived along with the works of other Jacobean playwrights out of necessity, but a number of them remained popular even after a new Restoration repertory had developed. It is no accident that The Tempest was the most popular of all the plays in the Restoration period, for it is the one that benefits most from spectacular staging and the addition of lavish music. The Restoration version, an adaptation by William Davenant and John Dryden, was put on in 1667 and was revised by Thomas Shadwell in 1674 with many more opportunities for music. This version, with music by John Banister, Matthew Locke, Pelham Humfrey and others, remained in use until the early eighteenth century, when it was replaced by the music long attributed to Henry Purcell, now thought to be by Purcell’s pupil John Weldon. The only piece of genuine Purcell in the score is the playful song ‘Dear pretty youth’, apparently sung in Act IV, Scene iii of the 1674 version by Dorinda to her lover Hippolito, who has supposedly been killed by his rival Ferdinand; both Dorinda and Hippolito were extra characters added in the Restoration adaptation. We have also included one of the finest numbers from the Weldon score, the Purcellian ground bass song ‘Dry those eyes which are o’erflowing’, sung by Ariel in Act III, Scene iii to Alonzo, Gonzales and Antonio.

Three of the other pieces recorded here come from productions in the London theatres around 1700. Jeremiah Clarke’s fine overture for Titus Andronicus probably dates from 1696, when Ravenscroft’s adaptation of the play was republished. The young composer seems to have come up to London from Winchester to help Daniel Purcell with the music for Christopher Rich’s company at Drury Lane shortly after Henry Purcell’s sudden death in November 1695. It is likely that the two movements come from a complete suite for the play, otherwise lost. At this period the rival theatre company was run by Thomas Betterton at Lincoln’s Inn Fields, with music mainly supplied by John Eccles. Eccles’s simple but effective song ‘Can life be a blessing?’ seems to have been written for an unrecorded production of Dryden’s adaptation of Troilus and Cressida around 1695, when the play was republished. Weldon’s brilliant setting of ‘Take, O take those lips away’ was apparently written for the production of Charles Gildon’s adaptation of Measure for Measure at Lincoln’s Inn Fields in 1700.

Although spectacular musical productions of Shakespeare declined in popularity after about 1710, when Italian opera began to dominate the London theatrical scene, composers continued to set his lyrics for concert or domestic use. Richard Leveridge’s setting of famous words from Love’s Labour’s Lost is a case in point: it combines into a single strophic song the matching lyrics ‘When daisies pied and violets blue’ and ‘When icicles hang by the wall’, sung in the play by Spring and Winter respectively. Maurice Greene’s suave setting of ‘Orpheus with his lute’ is not known to have been written for a stage production. It uses the bipartite form popular in the early eighteenth century with contrasted settings of each verse, the second imitating the ‘billows of the sea’ with flowing passages in the bass. By contrast, Thomas Chilcot’s haunting setting of the same lyric is strophic and has an orchestral accompaniment, with flute obbligato and pizzicato strings imitating the lute. Chilcot was organist of Bath Abbey, and is not known to have written for the theatre. His Twelve English Songs are notable for the high quality of their texts, ranging from Shakespeare to Anacreon and Euripides. Chilcot’s charming Arne-like setting of ‘Hark, hark, the lark’ casts the lyric into two repeated sections, like many ‘pleasure gardens’ songs of the period, while his fine ‘Pardon, goddess of the night’ is through-composed, but is remarkably varied within the constraints of the siciliana rhythm.

There was a revival in interest in Shakespeare on the stage around 1740, prompted by the revolution in Shakespearean acting initiated by Charles Macklin and David Garrick. Macklin was lucky to have Thomas Arne available to provide music for his Drury Lane productions: Arne’s settings of songs for As You Like It (1740), The Merchant of Venice (1741), The Tempest (1740 and 1746) and Cymbeline (1744) have never been surpassed or forgotten since they were written. Arne tended to use either the strophic form, with a simple almost folk-like melody, as in ‘To fair Fidele’s grassy tomb’, or the ‘pleasure gardens’ form of two sections enclosed by opening and closing ritornelli, as in ‘When daisies pied and violets blue’, ‘When icicles hang on the wall’ and, most memorably, ‘Where the bee sucks, there lurk I’. Arne is also notable for his simple but effective orchestration, using two- or three-part strings with a flute where necessary to imitate birds. It is normally said that ‘Honour, riches, marriage-blessing’ from the Act IV masque in The Tempest was written for the 1746 production, but it only survives in a much later manuscript, and is in Arne’s later Italianate style, with brilliant passage-work for the voice. It is therefore likely to be for the 1776 revival of the play at Covent Garden.

Arne was not the only composer to write attractive Shakespeare settings at the time. The Dutch composer Willem De Fesch wrote music for a production of The Tempest at Drury Lane in 1746, including an up-to-date setting of ‘All fancy sick’ as a da capo aria for soprano, flute and continuo. A decade later John Christopher Smith, Handel’s pupil and assistant, included some striking settings of well-known lyrics in his two Shakespearean operas The Fairies (1755), derived from A Midsummer Night’s Dream, and The Tempest (1756). ‘You spotted snakes’ creates a magical atmosphere by the use of drones and hushed unison passages, while the remarkable ‘Full fathom five’ evokes distant bells with strings pizzicato and muted. We have included a concerto by the painter, civil servant and wind player Robert Woodcock to represent the sort of music that would have been played in the intervals of eighteenth-century productions of Shakespeare plays. Like many concertos of the period written for the London theatres, it has no viola part and is written in a light Italianate style. Woodcock died in April 1728, and his XII Concertos in Eight Parts seem to have been published soon afterwards as a posthumous tribute to him. Thus the three flute concertos included in the collection seem to be the earliest published anywhere for the instrument.