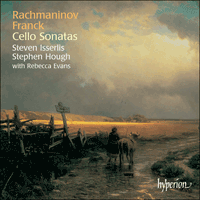 Playing together for the first time for Hyperion, Hough and Isserlis are stunningly matched in this large-scale passionate romantic programme. The sonatas stand at the centre of the meaty repertoire established by Brahms—whose two cello sonatas Steven Isserlis has recorded for us in an award-winning disc accompanied by Peter Evans (CDA66159)—and characterised by grand sweeping gestures, lush melody, and heartfelt emotions that sear from pathos to frenzy. The Franck is, of course, an alternative version the composer wished for his violin sonata, a transition that many feel to be the work's happiest incarnation. These performances are distinguished by the inspired combination of the renowned energy and panache of Isserlis with the fastidious translucency of Hough's playing, in music often despatched with more gush than gusto. Isserlis also provides a programme note very much in his own style; he examines the inspiration behind both works, coming as they do from deeply religious composers who were also the voices of greatly sensual radiance, while including reminiscences of his grandfather playing the piano part for the dedicatee of the Rachmaninov and of his grandmother learning the piano part in her 80s, to accompany her grandson! The disc is completed by what in the context may seem miniatures but which amply show how these great composers had a language of intimacy as much as expansiveness.

PICK OF THE MONTH, RECITAL DISC (THE STRAD)

‘An unalloyed joy … the joy they take in each other’s playing is infectious, and if this doesn’t win a few more awards I’ll eat my CD player’ (The Mail on Sunday)
‘Steven Isserlis and Stephen Hough give a serene and eloquent performance’ (Gramophone)
‘The lightness of touch gives the music time to breathe without any unnecessary lingering, and the clarity of balance—and Hough’s fine control of texture—ensures the communication of a wealth of detail that’s often lost’ (The Irish Times)
‘Steven Isserlis gives a deeply felt and warmly affectionate reading, abetted by Stephen Hough’s sensitive pianism’ (Classics Today)
‘These sonatas … demand equally matched virtuosi who are also sensitive chamber musicians. Steven Isserlis and Stephen Hough are ideal for both roles’ (Nineteenth-Century Music Review)

Abrooding, taciturn Russian, exiled in his later years from his native land, wandering the world as a touring virtuoso, like a lost soul; and a gentle, paternal Belgian, a well-known teacher who hardly travelled anywhere in his life, and had no ambition to do so—strange companions, one might think, to be put side by side on a recording without their consent. But Rachmaninov and Franck did have one powerful trait in common (apart from being famous Romantic composers): their religious fervour, which was a strong presence throughout their lives and in their music, both secular and devotional. Franck’s ardent Catholicism is well known (in the words of his violinist-friend Eugene Ysaÿe, dedicatee of the sonata, ‘he seemed to belong more to heaven than to earth’), Rachmaninov’s reliance on the inspiration of the Russian Orthodox Church rather less so. But in his autobiography, Charlie Chaplin, no less, tells a revealing story: ‘Rachmaninov was a strange-looking man, with something aesthetic and cloistral about him … Someone brought the topic around to religion and I confessed that I was not a believer. Rachmaninov quickly interposed: “But how can you have art without religion?” I was stumped for a moment. “I don’t think we are talking about the same thing”, I said. “My concept of religion is a belief about dogma—and art is a feeling more than a belief.” “So is religion”, he answered. After that I shut up.”’

This mystic aspect to Rachmaninov’s art can be felt strongly throughout his Cello Sonata, his most famous piece of chamber music. While there are no obvious quotations from any Orthodox hymns, the style of many of the themes, with their close intervals, their incense-filled colours, the passionate, almost obsessive repetition of single notes (particularly in the main theme of the slow movement), and the frequent bell-like sonorities, owe a huge debt to the music of the Russian Church that was such an important influence on the composer’s life. Written in 1901, the year after the perennially beloved Second Piano Concerto, the Cello Sonata reflects, perhaps, the state of Rachmaninov’s heart and mind. Having suffered a nervous breakdown after the catastrophic failure of his First Symphony in 1897, Rachmaninov had fought his way back to mental and creative health. Surely it is not fanciful to hear an echo of this in the struggles of the first movement, with its conflict between semitones and whole tones; in the dark night of the Scherzo; and then in the blazing joy of the Finale? No bearded Russian priest with his Easter cry ‘Christ is Risen’ can ever have sounded more triumphant than the cello does as it announces the glorious second theme of this movement. The whole sonata, imbued as it is with the classical discipline that is so vital a feature of all Rachmaninov’s music, encompasses a vast range of romantic emotion—a journey of the soul.

(Incidentally, a footnote: any attentive listener following this performance with a score may be surprised, if not shocked, to hear us playing fortissimo at one point in the coda of the last movement, when the printed edition is clearly marked pianissimo. The justification—apart from the musical sense it so clearly makes, at least to us—comes from a piece of oral history: my grandfather, Julius Isserlis, used to play this sonata in Russia with the work’s dedicatee, the cellist Anatoly Brandukov. Brandukov, when he wasn’t busy flirting outrageously with my grandmother, apparently told my grandfather that Rachmaninov had decided, presumably after publication, that he preferred the fortissimo at this point. Since there has only been one edition of the sonata, this preference has never been documented. I heard about it only because my grandmother, also a pianist, learnt the sonata when she was around eighty, in order to play it with me when I was a little boy; she passed on this nugget of information, and I have to say that I find it entirely convincing.)

César Franck’s Sonata, dating from 1886, is another ‘voyage of the soul’; again one suspects that personal reasons may have been involved. César Franck was not only a devoted teacher, but also a dutiful husband to a wife whose religion seems to have been more strict than loving. However, morally upright though he undoubtedly was for most of his life, there is reason to believe the rumour—still floating around after 125 years or so—that he fell in love with his dashing Irish student Augusta Holmès (also beloved of Saint-Saëns, Liszt and many others). The chamber work preceding the sonata by some years, Franck’s Piano Quintet, which marked a dramatic departure in musical style for the erstwhile rather demure composer, seems to have had a strong connection with this romance. It was probably not entirely a coincidence that Saint-Saëns behaved appallingly at the première, and that Mrs Franck yelled abuse at her husband’s students for allowing Franck to compose such ‘abhorrent’ music! The Sonata is altogether a more refined work than the quintet, its passion more radiant; but here too one can feel a conflict between the worldly and the sacred. This is expressed in terms of musical intervals, with the minor and major third (generally considered the most expressive intervals in music) tussling for supremacy; this struggle remains unresolved until after the appearance halfway through the Recitativo/Fantasia of a shining theme dominated by the ‘pure’ intervals of the fourth and fifth. As with Rachmaninov’s sonata, the last movement is joyous, bells pealing to mark the conclusion to the conflict, in which the sacred appears to have triumphed. (Or perhaps not: a story is told that one student of Franck’s was describing the master as a mystic. Another raised his eyebrows: ‘A mystic, eh? Go and ask Augusta!’ We will never know. At any rate, the end of the sonata is unmistakably triumphant!)

(Another footnote: why play this sonata on the cello? Well, there is some justification. Oral history has it that it was originally conceived as a cello sonata, Franck only changing his mind when he decided to present the sonata to his great friend and ‘ideal interpreter’, the violinist Ysaÿe, as a wedding present. Furthermore, the second edition of the sonata, published well within Franck’s lifetime—in fact, a copy exists with a personal dedication by Franck—describes the sonata as being for violin or cello. So it is not really an arrangement, more of an alternate version.)

The other works on this disc represent the composers’ earlier selves—less concentrated in their powers of expression, perhaps, but still highly recognisable. Rachmaninov’s two pieces opus 2 were probably written in 1891, also for Brandukov. The dark warmth of the first and the exotic colours of the second are pure Rachmaninov: the eighteen-year-old was already speaking in his own unique voice. The Franck songs show two sides of his personality. Le Sylphe written in 1842–3 to words by Alexandre Dumas, is a charming and sensuous example of Franck’s early secular style. Panis Angelicus of 1872, on the other hand, one of his most popular works, represents the religious music for which he was best known at that time. Perhaps it sounds somewhat Victorian to modern ears; but the sincerity of Franck’s devotion is still touching.

(A last footnote: this version of Panis Angelicus is taken from one of the innumerable arrangements published during Franck’s lifetime. Since it lists no arranger’s name the arrangement may well be by the composer himself, as he made many of them. We have slightly altered it, however, to bring it closer to the original version, in which the cello takes a more prominent role than the keyboard—very noble of my friend Mr Hough, I must admit, even if a bottle of good red wine did have to change hands in order to cement the arrangement!)