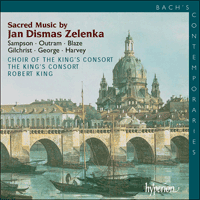 Continuing their acclaimed series of 'Bach's Contemporaries', The King's Consort and Robert King turn their attention to the astonishing sacred music of the remarkable Bohemian composer Jan Dismas Zelenka.

Colourful, complex, ornate, idiosyncratic, old-fashioned yet simultaneously forward-looking, Zelenka's music never ceases to amaze. This recording presents wonderfully varied and individual works. Two are substantial choral pieces: the Litaniae de Venerabili Sacramento shows Zelenka's more conventional, old-fashioned style of writing, yet the splendidly individual Invitatorium 'Regem, cui omnia vivunt' gives a powerful impression of Zelenka’s choral style in a unique fusion of modern, dramatic gestures of harmony, dynamics and scoring. Also part of the same Officium defunctorum were the three Lessons, which Zelenka scored for chamber forces. Here, instrumental colour in all its variety is to the fore, with the desolate texts enhanced by rare orchestral sounds including the soprano chalumeau, recorders and even muted oboes. Quirky in its orchestration too is the setting for soprano of Salve regina in A minor where Zelenka's accompaniment is shared by concertante flute, oboe, violin and a larger ensemble in a substantial solo motet, gloriously sung by Carolyn Sampson. The final work too is a delight, with the vocal scoring of Regina caeli laetare reserved for three upper voices who sing in true 'close harmony'.

‘Constantly fascinating to listen to. Especially when performed as beautifully and with such evident care and affection as it is on Robert King’s new CD … Zelenka’s curious music could scarcely have better advocacy’ (Gramophone)
‘Performances are sensitive and stylish in ways that we have come to expect from this group’ (BBC Music Magazine)
‘Robert King and his period forces give performances it would be hard to beat’ (The Daily Telegraph)
‘Robert King with his King’s Consort and Choir directs performances both moving and exhilarating’ (The Guardian)
‘A really first-rate release’ (International Record Review)
‘The performance is outstanding, capturing the startlingly original nature of the piece with singing and playing of such vitality and commitment’ (Fanfare, USA)
‘This CD of Robert King's stands high on the list of the best recordings of Zelenka's sacred music … for the characteristically exceptionally committed and supremely well-executed performances’ (Goldberg)
‘Eloquently presented by King and his first-rate accomplices’ (Music Week)
‘All of the soloists deserve special mention for sensitive performances that are appropriately expressive and that add essential individual color … you must get to know this wonderful and very deserving composer’ (Classics Today)

He must have been a strange man: stubborn, reserved, melancholy, fervently religious—which appeared as bigotry to some—and totally ‘uncourtly’ in his manner. With these character traits it seems quite understandable that Jan Dismas Zelenka, an orchestral player for many years at the Saxon court, was denied the post of Kapellmeister to which he had aspired. Instead, by way of consolation, he was made Kirchencompositeur (‘church composer’), a perfectly non-committal title as it was given by the court. However, this subordinate position in which Zelenka remained for the rest of his life not only guaranteed a raw financial deal, but also prevented suitable public appreciation of his œuvre. In his Musicalisches Lexicon, published in 1732, Johann Gottfried Walther dedicates four lines to Zelenka, writing about him as being a member of the kurfürstliche Hofkapelle, without even mentioning him as a composer.

Only a little information exists about Zelenka’s life. He was born in 1679 in a Bohemian village as a son of a Kantor. No documents about his first twenty-five years survive. It can be presumed that he received his early musical education from his father and he later attended the Jesuit Collegium Clementinum in Prague. His first employment by the aristocratic von Hartig family in Prague was soon followed by a post in Dresden; he was employed as a double bass player in about 1710 at the court of August the Strong, which had converted to Catholicism in 1697. Soon his activities as a composer were drawing attention. In order to complete his musical training, the Electoral Prince allowed him to undertake study trips between 1716 and 1719 to Italy and Vienna where he took lessons with Johann Joseph Fux. One of the most diligent and talented composers at the Saxon court, he contributed greatly to the unconventional style of the Dresden church music and became the most important assistant to the sickly Kapellmeister, Johann David Heinichen (1683–1729). However, Zelenka’s promising career during the era of Heinichen had already begun to waver by 1730. The Saxon heir to the throne, later Electoral Prince Friedrich August II, had discovered his love for the modern Italian style on his Grand Tour and tried—with increasing success—to get rid of the music by Heinichen and his colleagues (which was already considered slightly out of date) by employing others whenever possible and, most importantly, to re-establish opera. At that time, a young German composer, Johann Adolf Hasse, was being celebrated in Venice and Naples; his style was brilliant, melodious and simple, and immediately swept away the works of older composers. When Hasse—apparently after lengthy and secret negotiations—agreed to become Heinichen’s successor in Dresden, the destiny of Zelenka’s career was settled. With his complex and ornate style he did not stand a chance against Hasse’s disarming simplicity. Zelenka became withdrawn, composed far less and died in December 1745 an embittered, broken man.

Friedrich Rochlitz, a Leipzig musicologist, was the first to point out Zelenka’s significance. Rochlitz’s teachers, Johann Friedrich Doles and Johann Adam Hiller, both admirers and acquaintances of Zelenka, had introduced him to this forgotten composer. ‘Only with a special licence from high authorities which was very hard to obtain’ was Rochlitz then able to examine the musical legacy which had—even more than half a century later—been held back. He spent ‘hours … looking at some of the works, leaving it to coincidence to pick them out from the convolute’. On the basis of this short investigation he formulated his much-quoted assessment of Zelenka’s œuvre: it demonstrates ‘a profundity, knowledgeable harmony and experienced usage thereof which pull his chair very near to father Sebastian’.

This recording presents four representative sacred works by Zelenka from the period of about 1727 to 1733 which Rochlitz held in high esteem for the ‘admirable idiosyncrasy’ of the harmonic language and ‘ornately entwined’ voices.

The Litaniae de Venerabili Sacramento in C major (Z147) were, according to a note on the autograph, completed on 1 June 1727. They were written for the Corpus Christi procession on 12 June which, out of consideration for the Protestant public, did not take place out of doors but inside the Catholic court church. Two works by Heinichen were also performed at the same occasion. According to the Dresden tradition, Zelenka structured his litany into a series of single musical numbers in which he skilfully highlighted scoring and compo­sitional technique. The style of these eleven movements is predominantly old-fashioned, with contrapuntal craftsmanship interrupted by those occasional harmonic twists which create such individuality in Zelenka’s writing. Zelenka creates an overall framework by the reintroduction of the music of Kyrie II into the concluding Agnus Dei.

The Marian antiphon Regina caeli laetare in F major (Z134) was written before 1728. It is kept simple and was probably intended as a repertoire piece for Lady Day. However, there are no surviving references to actual performances. The composition is remarkable for its unusual scoring for three high voices: they mark out the cantus firmus plainchant over a walking instrumental bass line before, prompted by the harmonies of the upper strings and oboes, they join in close harmony. A triple-metre passage for voices and continuo provides a brief middle section, but swiftly the instruments return to the opening material for a final, joyful Alleluia.

The Marian antiphon Salve regina, mater misericordiae in A minor (Z135) was completed in September 1730. In the catalogue of his works, Zelenka entered the work as his own but in fact it is an arrangement of an anonymous piece which he had copied back in 1719. In the original version the voice is accompanied merely by two solo violins; in Zelenka’s arrangement the accompaniment is shared by a concertante flute, oboe and violin (muted in the first movement), and at times a larger ensemble. The result is a generously scored and substantial solo motet of five movements whose fine, elaborated composition is very much shaped by Zelenka’s personal style, especially in its splendid quirks of orchestration.

The last four numbers of this recording are part of the Officium defunctorum (Z47) from 1733. Altogether, the work contains thirteen movements: it was written at the same time as the large Requiem in D major which was composed for the funeral service of August the Strong. The Electoral Prince had died on 1 February 1733 in Warsaw and was—as King of Poland—buried in the Polish ‘coronation’ city of Cracow. Only his heart, locked in a silver capsule, was transported to Dresden. The Officium consists of a gloomy Invitatorium (‘Regem, cui omnia vivunt’) in C minor, followed by nine pairs of Lesson and Responsory. The three Lessons recorded here demonstrate Zelenka’s skilful use of instrumental colours in chamber music. In the aria of the first Lesson the desolate text is enhanced by the unusual sound of the smallest of the chalumeau family, the soprano (its playing register and delicate character belying an overall length of just 26cm), accompanied by muted strings. For the aria of the second Lesson he calls upon another rare woodwind colour, that of two muted oboes, instructing that the bass line below them should be played by the violins, viola, bassoon and organ, without cello or violone. In the third Lesson he turns to a scoring often featured by Baroque composers at moments of mourning, that of a pair of recorders.

The Invitatorium (the invitation addressed to the faithful to take part in the Divine Office remembering the dead) gives a powerful impression of Zelenka’s choral style, presenting a unique mixture of modern, dramatic gestures of harmony, dynamics and scoring with elements of the old-fashioned writing for which Prince Friedrich August had shown such disdain. Multi-sectional, the work is, from its opening sforzando ‘stabs’ and rolling arpeggios from the muted strings, predomi­nantly dark and unsettled in mood, lightened only by the emergence in triple metre of two other-worldly flutes. The instrumental elements are mixed with passages of extended accompanied semi-recitative for the alto soloist and interpolations from the chorus. Zelenka also includes an all-too-brief depiction of the raging of the sea, wonderfully scored, and before the final section a plainsong statement of the Requiem chant.

Zelenka’s deep sympathy at the death of his admired employer is apparent from the comments which the composer inserted into the catalogue of his works next to these compositions, and even more directly in the personal, grief-stricken tone of the music itself—a sign of the profound ‘consecration’ of his œuvre.