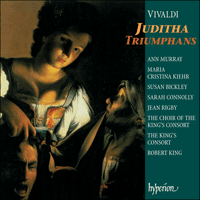 Vivaldi's only surviving oratorio here receives a rare recording, and this stunning performance (recorded after a London concert, and the only truly 'authentic' version available) is sure to become the definitive version for years to come.

The work was written for the Pietà, the famous girls' orphanage in Venice where Vivaldi was Music Director and for which much of his music was composed, and with an almost unlimited range of instruments and instrumentalists at his disposal Vivaldi truly indulged his fondness for instrumental colour—throughout the many arias, the all-female cast are accompanied variously by chalumeau, early clarinets, viole all'inglese, viola d'amore and four theorbos, in addition to the instruments of the expected baroque orchestra.

Though the extant work opens with a rousing and virtuosic chorus, in this performance Robert King prefaces it with the first two movements of Vivaldi's colourful Concerto (RV555) as it is certain the work would have commenced with an overture, now lost.

‘A stunning cast, orchestra and choir’ (BBC Music Magazine)
‘A wonderful piece of dramatic music that receives superb treatment at the hands of The King's Consort and soloists. An absolutely vital release and one of the best recordings I've heard this year’ (American Record Guide)
‘Lyricism in abundance and some truly extraordinary scoring. Robert King's direction revels in such novelties and he has a skillful team of players to realise the ravishing beauties of the score’ (The Times)
‘Although it comes as Vol IV of King's projected complete recording of Vivaldi's sacred music, this allegorical oratorio—Judith's murder of Holofernes representing Venice's triumph over the Ottoman hordes—seems to belong to the opera house rather than the church. Vivaldi wrote it in 1716 for the youthful female virtuosi of the Ospedal della Pieta: the vocal writing requires both astonishing agility and rare intensity; and he asks for an extravagant instrumentarium, including clarinets, a chalumeau, mandolin and violas 'all' inglese'. The choruses that open and close the oratorio and punctuate the sequence of glorious arias have a thrilling martial éclat. The soloists are wonderful: Ann Murray's Judith, beguiling and brilliant, marks her return to form, and her bright mezzo contrasts well with the velvet alto of Susan Bickley as Holofernes. Maria Cristina Kiehr—in the only soprano role, Vagaus—gets the lion's share of the bravura numbers and sings them superlatively well. Another revelatory issue from Hyperion’ (The Sunday Times)
‘Hugely enjoyable … excellent soloists … masterly recording’ (Classic CD)
‘Magnificent. Unquestionably a masterpiece that bridles with invention from start to finish. A feat of supreme singing and intensely dramatic projection. Superlative recorded sound that in its combination of warmth, depth and immediacy, conveys the supeme quality of the performance with devastating Impact. This is not only the finest recording I've encountered this year, but one of the great recordings of the decade. There is no justice if it does not pick up awards galore’ (Fanfare, USA)