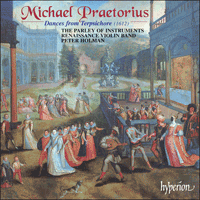 Praetorius devoted most of his life to church music: he published more than twenty collections, mostly of settings of Lutheran chorales, and a number of others are known to have existed in manuscript. He also planned a series of collections of secular music named after the various Greek muses, including Euterpe (Italian and English dances), Thalia (toccatas and canzonas) and Erato (German secular songs). Unfortunately, in the event he managed to publish only one, Terpsichore, musarum aoniarum quinta (1612), consisting of 312 dances in four, five and six parts. The contents of Terpsichore are often assumed to be the compositions of Praetorius himself, however they are collections of different French dance styles—some by him and others are such as harmonisations of melodies supplied by Emeraud; original five-part pieces by Caroubel, a French court violinist; and those he labelled 'anonymous' (pieces received by him in two-part form, to which he just added inner parts). Pipe and tabor and the bagpipes are the only wind instruments used on this recording—the rest of the instrumentation is for violin bands as it seems that, despite recent recordings and interpretations, the collection was primarily intended for violins.

‘A new look at a famous score, and for this reason as well as for the excellent performances, warmly welcomed’ (Gramophone)
‘Peter Holman and his band reveal this music’s rich diversity in an intelligent and pleasing anthology. Taut rhythms and fine dynamic control throughout carry the listener along most persuasively … A collection of earthier English courantes and a group of festive ballets bring this highly entertaining programme to a brilliant conclusion’ (BBC Music Magazine)
‘This … must be regarded as the most authentic and comprehensive now available’ (The Penguin Guide to Compact Discs)
‘The early-music disc with the highest feel-good factor’ (Fanfare, USA)
‘These delightful performances will come as a refreshing change that blows away decades of excess. The slightly husky sound of The Parley's Renaissance violins suits this music to perfection, while the catchy rhythms of the dances are inflected with an irresistible verve, buoyancy and character … irresistible stuff’ (Goldberg)

Michael Praetorius was born on 15 February 1571 at Creuzberg an der Werra near Eisenach, the son of a Lutheran pastor. His family moved to Torgau when he was a small child, though throughout his life he referred to himself as ‘M.P.C.’—Michael Praetorius Creuzbergensis. He was educated in Frankfurt an der Oder and Zerbst, and in 1587 became organist of St Marien in Frankfurt. In 1595 he entered the service of Duke Heinrich Julius of Brunswick in Wolfenbüttel and was made Kapellmeister in 1604. Shortly afterwards he also began to work for Landgrave Moritz of Hesse at Kassel, and after Duke Heinrich Julius’s death in 1613 spent several years working for the Elector of Saxony in Dresden. By this time he was one of the most famous musicians in Germany, and worked at various times over the next few years at Magdeburg, Halle, Sonderhausen, Kassel, Leipzig, Nuremberg and Bayreuth. However, he continued as Kapellmeister at the Wolfenbüttel court, and died there on his fiftieth birthday, 15 February 1621.

Praetorius devoted most of his life to church music. He published more than twenty collections, mostly of settings of Lutheran chorales, and a number of others are known to have existed in manuscript. He also planned a series of collections of secular music named after the various Greek muses, including Euterpe (Italian and English dances), Thalia (toccatas and canzonas) and Erato (German secular songs). Unfortunately, in the event he managed to publish only one, Terpsichore, musarum aoniarum quinta (Wolfenbüttel, 1612), consisting of 312 dances in four, five and six parts. The contents of Terpsichore are often assumed to be the compositions of Praetorius himself, though in the dedication to Duke Heinrich Julius he wrote that ‘these assorted French bransles, dances and melodies’ had been ‘brought by your Royal Highness’s dancing master Antoine Emeraud from France’ and had been ‘given over to me to be arranged in four or five parts, which I have justly done’. In fact, even this is an oversimplification. Throughout the collection he distinguishes between pieces he labelled ‘M.P.C.’ (his harmonisations of melodies supplied by Emeraud), those he attributed to ‘F.C.’ (original five-part pieces by Pierre Francisque Caroubel, a French court violinist who spent some time at the Wolfenbüttel court around 1610), and those he labelled ‘Incerti’ or anonymous (pieces received by him in two-part form, to which he just added inner parts).

Also, although Praetorius states a number of times that Terpsichore is a collection of French dances, it is actually rather more diverse. It is mostly organised by genre with sections for the main types of French dances of the time, starting with suites of bransles, followed by courantes, voltes or voltas, ballets (some of which come from masque-like ballets produced at the French court) and passamezzos and galliards. However, Nos 22 to 34 make up a section of what we might call generic dances: each one seems to come from a different country and is a setting of the tune originally associated with the dance. In some cases, such as the bourrée (from the Auvergne), the saraband (possibly from Latin America), and the canarie (from the Canary Islands), the dance subsequently became widely popular and attracted a repertory of many other tunes, though the pavan of Spain and the spagnoletta (‘comes from the Netherlands and was danced very rarely in France’, according to Praetorius) seem to be dances that were only ever associated with a single tune.

Furthermore, Praetorius printed a number of pieces among his section of courantes that come from England rather than France. Nos 151, 152, 154 and 123 are settings of the English popular tunes ‘Wilson’s Wild’, ‘Light of Love’, ‘Grimstock’ and ‘Packington’s Pound’, while Nos 157 and 158 are versions of a lute piece by John Dowland and a song by Thomas Campion respectively. Praetorius presumably obtained these pieces from Emeraud and thought they were French, but Emeraud probably found them in the repertory of popular tunes used by the travelling groups of English actors and musicians that toured Germany in the early seventeenth century; their performances included ‘jigs’ or short popular dramas set to popular tunes of this sort. We have put them together to make up a suite of six English courantes.

The most substantial and complex pieces in Terpsichore are the suites of bransles. Indeed, the one that opens the collection, by Caroubel, is one of the longest continuous pieces of instrumental music written before the eighteenth century. It begins in duple time (Bransle Simple), changes to triple time (Bransle Gay) and then to a faster triple time (Bransle de Poictou). A return to duple time (Bransle de Montirande) leads to an exhilarating climax with a series of gavottes and a section entitled ‘Gilotte’. At the time the bransle was just beginning to be popular as a court dance. It began as a popular round dance, though by the middle of the seventeenth century a standard sequence of six sections had evolved, and it was being used to open balls at courts all over Europe. The Bransle de Villages, No 14, is a evocation of village dance music, with melodies deliberately restricted in range and key. This suggested to us adding pipe and tabor and bagpipes to the strings; rustic instruments of this sort were often used with violin bands to bring the flavour of popular music into the court.

It may surprise some people that the pipe and tabor and the bagpipes are the only wind instruments used on this recording. Over the last fifty years a tradition has grown up, mostly inspired by Fritz Neumeyer’s classic Archiv LP of the 1950s, of making recordings of Terpsichore that exploit the varied colours of Renaissance wind and stringed instruments described by Praetorius in the second volume of his treatise Syntagma musicum (Wolfenbüttel, 1618). However, Praetorius makes it clear in the preface to Terpsichore that the collection was ‘written for the French dancers by generally very good Geigers (known in their language as Violons) or lutenists’, and that ‘they play these same dances on the violin or lute’. Given that Antoine Emeraud was a dancing master and that French dancing masters at the time were normally violinists, that Caroubel was a French court violinist, and that some of the pieces in Terpsichore are also found in the French violin band repertory, it seems that the collection was primarily intended for violins. Indeed, the fact that No 288, a six-part ‘Passameze pour les cornetz’, is the only piece with specified instrumentation could imply that the rest of the collection is intended for strings rather than winds.

On this recording we have used two types of violin band as a basic resource. The five-part pieces use the one treble, three inner part and bass scoring that was associated at the time with the French court violin band, soon to be known as the ‘Vingt-quatre violons’. For them we have used a band of roughly half that size, using four violins, six violas divided into three sections and four bass violins (the large ancestors of the cello, tuned in B flat). For some of the four-part pieces we have imagined a more domestic ensemble consisting of violin, two violas and bass violin with a consort of four lutes of different sizes. As already mentioned, Praetorius specifies the violin and the lute as the instruments used in France for courtly dance music; the lute ensemble music published by Nicolas Vallet in 1615 and by Jean-Baptiste Besard in 1617 offered us obvious models for intabulating the four-part writing in Terpsichore for lutes. Since these collections draw on the same French-dominated repertory of courtly dance music it seemed a good idea to include them on the recording. Incidentally, the Besard pieces, scored for treble and bass bowed instruments and three lutes of different sizes and tunings, are notoriously corrupt, containing clashes of harmony between the instruments at every turn. We managed to make a complete usable version of his setting of the lovely folksong ‘Une jeune fillette’, though the version of the ‘Ballo del Gran Duca’ (taken from a passage in Cavalieri’s concluding ballo from the Florentine intermedii of 1589) proved to work better without the treble and bass parts. Besard’s delightful Bransles de Village are for two lutes of different sizes and posed no problems. They make an interesting comparison with Praetorius’s Bransle de Villages, not least because of their imitations of bagpipes.