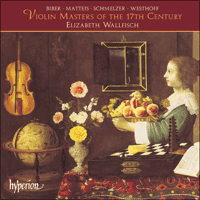 Violin Masters of the 17th Century

Elizabeth Wallfisch has recorded many critically acclaimed CDs for Hyperion, both as a chamber musician and as a soloist. As with her previous disc on Hyperion of unaccompanied music (Bach Sonatas and Partitas, CDD22009) this disc gives the listener the opportunity to appreciate every nuance, every flourish, every virtuosic display, every inflection of tone and colour that Ms Wallfisch exudes so exquisitely and effortlessly from her instrument.

Biber's 'Mystery' or 'Rosary' sonatas were written using the then-popular scordatura technique of mis-tuning the violin to emphasise the resonance of a particular key, and the Passacaglia is the only movement from the set that uses normal tuning. Westhoff's collection of six suites was published in Dresden in 1697. Possibly the first collection devoted entirely to music for unaccompanied violin, it has often been thought of as the model for Bach's solo violin music. The works by Schmelzer and Matteis were originally scored for multiple instruments, and Wallfisch has made solo violin versions for this recording, skilfully incorporating the bass line to create a richly polyphonic texture.

Each of the composers presented here were violin virtuosos of their time, and would surely cherish such a supreme exponent to display their art today.

‘An entertaining recital set down with a winning lightness of touch … Wallfisch’s playing is a model of stylishness, her violin, tuned a tone below modern pitch, producing a mellow, expressive sound’ (Gramophone)
‘Playing of poise and sensitivity’ (The Independent)
‘There’s no questioning the wonderful sound picture, or the indisputable quality of these performances’ (Early Music Review)
‘These are wonderfully inventive additions to the unaccompanied violin repertoire’ (American Record Guide)
‘I hope that a sequel has been planned’ (The Strad)
‘The high quality of the works together with Elizabeth Wallfisch's stylish playing and intelligent programming make this a thoroughly captivating recital’ (Goldberg)

In the sixteenth century the violin was essentially an ensemble instrument. It was the soprano member of the violin consort and used almost exclusively to accompany dance music. A solo repertory for the violin developed only after 1600 when it began to be used with other instruments in mixed ensembles, and to be accompanied by continuo instruments such as harpsichords, organs and lutes. This change involved a move from the dance floor to the organ loft and into the virtuoso ensembles employed at the leading European courts. In Italy this new solo repertory was focused on the sonata, a type of music defined largely by the fact that it did not use dance forms, ground basses or contrapuntal patterns, the accepted forms of the sixteenth century. In Germany things were rather different. German violin composers took up the sonata in the 1630s and ’40s, but throughout the seventeenth century they continued to write more dance music for their instrument than their Italian colleagues, and also tended to use ground basses in their sonatas to a greater extent. Even late in the century it was common for German-speaking composers to write sonatas based wholly or partly on simple, repeated chord sequences. This conservative outlook is reflected in the programme on this CD: most of the pieces are either in dance forms or use ground basses.

Another difference between Italian and German violin music is the degree and type of virtuosity employed. Early seventeenth-century Italians such as Biagio Marini and Carlo Farina experimented with the use of chords and high positions, though Italian sonatas increasingly concentrated on purely musical qualities. The technical demands of Corelli’s famous Opus 5 sonatas of 1700, for instance, are relatively modest, which is partly why they became classics of the repertory and were used as teaching material throughout the eighteenth century. In this respect, German-speaking composers lagged behind their Italian colleagues: the extravagant and often bizarre demands of their virtuoso solo violin music reached some sort of peak around 1700. One of the most important features of the German violin style was the use of double- and triple-stopping, which enabled violinists to play several contrapuntal lines at once, or even to play without any accompaniment. Composers in Bavaria and Austria often also used scordatura (the deliberate mis-tuning of the violin) to make chords easier to play and to make the instrument resonate in a particular key. Heinrich Biber explored no fewer than fourteen tunings in his famous ‘Mystery’ or ‘Rosary’ Sonatas, though the piece by him recorded here, the Passacaglia that comes at the end of the Mystery Sonatas, uses the normal tuning.

In this context, it is interesting that the suites by Johann Paul von Westhoff do not use scordatura, despite the fact that they are some of the most demanding violin pieces of their time. This is perhaps because Westhoff was brought up and educated at the Dresden court, where his father was a member of the Hofkapelle; he served in the Dresden Hofkapelle himself until 1697, but moved to Weimar in 1699 to become secretary, musician and tutor in French and Italian at the court. Dresden was traditionally the German court with the closest musical links to Venice and other Italian cities. Heinrich Schütz had continually promoted the Venetian style during his long career as the Kapellmeister of the Dresden court, and Westhoff worked under his successors, the Italians Marco Giuseppe Peranda, Sebastiano Cherici and Vincenzo Albrici. Westhoff was making some sort of statement about the modernity and Italianate nature of his suites when he refrained from using scordatura for such demanding music. His sometime Dresden colleague Johann Jakob Walther strongly criticised scordatura in a preface of 1688, and it declined rapidly around 1700 as composers became more interested in modulating to a range of keys than exploiting the sonority of a particular key.

However, in other respects the collection of six suites which Westhoff published in Dresden in 1697 (we do not know its formal title because the title-page of the only known copy is lost) belongs squarely to the German tradition. It seems to have been the first collection devoted entirely to music for unaccompanied violin, and it has often been thought of as the model for Bach’s solo violin music. However, the resemblance is not that close. Bach tends to suggest polyphony through the use of arpeggios while Westhoff writes mostly in continuous chords. Also, all of Westhoff’s suites use the same sequence of movements – allemande, courante, sarabande and gigue – while each of Bach’s three partitas uses a different sequence of dances. Most important, Westhoff’s dance movements are relatively short and use straightforward harmonic patterns. The more complex Italian harmonic patterns that enabled composers to extend the length of their movements were only taken up by German composers in the second decade of the eighteenth century.

As already mentioned, Biber’s unaccompanied Passacaglia in G minor comes at the end of the great sequence of sonatas for scordatura violin and continuo that he assembled in Salzburg, probably in the middle of the 1670s. The fifteen sonatas portray episodes in the life of Christ and the Virgin Mary and seem to have been used in the traditional Rosary devotions in Salzburg during September or October, in which the faithful processed around a cycle of paintings or sculptures placed at strategic points in a church or some other building; in the original manuscript each of the sonatas has an engraving relevant to its theme pasted onto the stave at the head of the music. The Passacaglia is prefaced by a picture of a guardian angel leading a child. The Rosary devotions were often associated with the Feast of the Guardian Angel, celebrated at the time on various dates in September and October, and Biber makes the work suitable for the feast by basing it on four notes descending from tonic to dominant in the minor mode. This bass pattern is the traditional one associated with the Italian passacaglia ground bass, but it also happens to be the first line of a contemporary hymn to the Guardian Angel, ‘Einen Engel Gott mir geben’.

The Sonata in D major by Heinrich Schmelzer is the fourth of six sonatas published in Nuremberg in 1664 as part of the collection Sonatae unarum fidium. The original is for violin and continuo, but Elizabeth Wallfisch has made a version for unaccompanied violin, incorporating the simple bass line into the violin texture. Like the Biber Passacaglia, most of the sonata is a set of variations on four descending notes, though in the major rather than the minor. Towards the end the rhythms and forms of two dances, a sarabande and a gigue, are ingeniously incorporated into the variations. The sonata finishes with a free bravura passage. Schmelzer spent all of his career at the Viennese court, and ended up as Kapellmeister in 1679. He was an important influence on Heinrich Biber, and may have been his teacher.

The Neapolitan violinist and composer Nicola Matteis came to England in about 1670, and caused a sensation with his fine technique and fiery performing style. Most of his music appeared in four books of Ayrs for the Violin, published by the composer himself in 1676 and 1685. Matteis designed his violin music so that it could be performed in various ways: violin and continuo, two violins and continuo, and string quartet and continuo (though none of the viola parts have survived). In the same spirit, Elizabeth Wallfisch has made solo violin versions of four pieces (the fifth, the Fantasia in B flat major, was originally written for solo violin), mixing richly polyphonic abstract movements with lighter dances.