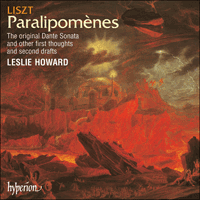 Two CDs of exceptional rarities. Throughout his career Liszt was an inveterate reviser of his works and much of his best-known output exists in earlier suppressed versions. These are often of great interest in themselves—containing music which was later excluded or, in the case of works commenced in the 1830s and '40s, piano-writing which was later simplified.

Of particular note here is the genesis of what later became the Dante Sonata, one of Liszt's most important works.

‘A formidable achievement, splendidly recorded’ (The Penguin Guide to Compact Discs)
‘All the music on these two well-filled discs is recorded here for the first time. Absorbing for the scholar specialist’ (Classic CD)

All of the music in this volume is familiar in later guises: Liszt’s constant self-revision, if left uninvestigated, would deprive us of many very beautiful first thoughts, and occasionally of texts which are in some ways superior to the final versions which Liszt saw through the press.

The famous final number of the second year of the Années de pèlerinage started life under the title Paralipomènes à la Divina Commedia, borrowing a philological term scarcely encountered in the musical world (indeed usually used to describe the biblical books of Chronicles, i.e., the things left out of the books of Kings), but here signifying a supplement to Dante’s work rather than a programmatic depiction. The first version has a Prima parte and a Seconda parte but it would not be accurate to think of the two movements as being in any way independent of each other. Certainly the first part comes to a full close in F sharp major—some distance from the D minor tonality of the overall work—but the second part contains no new material and brings matters firmly back to the home key. Listeners familiar with the final version will have no trouble in recognizing many different textures, and there is one strand of thematic material which features prominently here but which was later expunged. Tighter though the piece was to become, the first version has a real power and character of its own, and must have astounded those who first heard it, so audacious is it for its time in all respects.

The principal surviving manuscript of the whole work—itself a copyist’s fair copy—bears many signs of revision, and Liszt may have tinkered with it off and on. At some point he changed the first word of the title to Prolégomènes (as if to say: preliminary observations about Dante), rewrote the coda, and altered many passages in chiefly minor details. A later version rewrites the whole piece extensively, and pastes over large sections or pastes discarded pages together, but this ‘third’ version is easily distinguished as being largely in Liszt’s hand, and being the obvious immediate precursor to the final text, and the final title is already employed for it. For our present purposes, the ‘second’ version includes all of the intermediate layers of fully worked-out revisions, even if they were achieved by degrees originally. Après une lecture du Dante—Fantasia quasi Sonata is the title which clearly belongs to the extensive one-movement revision of the piece. Only at this stage is there any implication that there might be something specific in Dante that is referred to, although most speculation on the subject, beyond the general observation that Liszt describes the atmosphere of Inferno to a nicety, is idle. This is a version which more nearly resembles the final one, and the final alterations may well have been made at the proof stage—the third version seems to have been the engraver’s manuscript for the fourth and final version (see Volume 43 of this series)—and the audible differences from the final text are sometimes quite striking, especially at the recapitulation of the grand melody which does duty for a ‘second subject’, and at a passage of eight bars of outrageous difficulty in the peroration—which Liszt struck out for the published version.

Other pieces eventually revised for the second Année include the three Petrarch Sonnets, the supplementary volume Venezia e Napoli (the first versions are recorded in Volume 21) and texts of Il penseroso and Canzonetta del Salvator Rosa which differ only slightly from the published texts. The piece which eventually came to open the volume—Sposalizio—is offered here in a complete earlier version (the manuscript shows signs of much revision, and a substantial part of the piece is still present and legible in an even earlier draft) which is at one point rather more harmonically adventurous than the published text, but elsewhere less rich in its part-writing.

Liszt composed his Grand Solo de concert for a competition at the Paris Conservatoire—the manuscript is dated 1850, although most commentators allow that work probably began on the piece in the previous year. As is well known, Liszt altered the work before publication (as Grosses Konzertsolo—see Volume 3), introducing an internal slow movement, adding two other passages, and making numerous other smaller changes. But there is a tightness in the construction of the original work which makes the earlier version in many ways a more satisfying piece, and the section which Liszt was to remove to make way for the added Andante is of rare beauty. (The first version which he prepared for piano and orchestra follows the original form; the second, made in collaboration with Eduard Reuss, follows and extends the two-piano version: Concerto pathétique.) The funeral march towards the end of the piece is laid out on four staves, and it is clear that Liszt wishes the upper chords to be sustained whilst the lower drum-roll imitations are to be kept relatively clean. Of course this is easily possible using the sostenuto pedal of the modern concert grand, but in 1850 Liszt can at best have had pianos with divided sustaining pedals—such as Beethoven had had before him.

It has been remarked elsewhere in the notes to this series how Liszt kept returning to his song Die Zelle in Nonnenwerth, whose original text reflects the joy of Liszt’s very rare experience of holidaying on the Rhine and staying in the cloisters on the island of Nonnenwerth, en famille with Marie d’Agoult and their children in the early 1840s. Here is offered the most elusive of the many versions for solo piano, the first version, which Liszt gave the rather bulky title Élégie pour piano seul—which he later adopted as a subtitle, retaining as title that of the song. (For the second version see Volume 36 [where a further ossia version is also included]; for the third—called Feuille d’Album No 2—see Volume 26; for the final version see Volume 25.) This version was published in 1843, and may date from soon after the completion of the original song in 1841 at the latest.

The Romance oubliée also derives from a song—Ô pourquoi donc?—composed in 1843 and transcribed for piano as Romance (see Volume 25) in 1848. The 1880 revision, which amounts to a completely new view of old material overlaid with a mystical despair common in the extraordinary music of Liszt’s final years (see Volume 11, and Volume 25 for the version with viola), was apparently foreshadowed by the present text—whose manuscript is held in the Library of Congress—where the phrases are shorter, and the coda has not yet been added.

The first version of what Liszt later called Fantasie und Fuge über das Thema B-A-C-H (see Volume 3) but originally entitled Präludium und Fuge über das Motiv B-a-c-h (touchingly writing in Bach’s name wherever the musical motif is encountered) remained unpublished until the excellent Neue Liszt-Ausgabe issued it in 1983. This version is a piano transcription of the first version for organ, completed in 1856. The piano version probably dates from around the same time. Liszt made the second piano version using a copy of the first as a starting point, and finally made the second organ version from the second piano version! All the versions follow more or less the same structural arrangement, but differ in a myriad of details which make for fascinating comparisons. Only the fugal exposition is exactly the same.

There must have been at least four complete versions of the ‘Christmas Tree’ Suite, Weihnachtsbaum, although only parts of a second version survive. For the purposes of this series the third version, as published by Gutheil, is being left aside, containing as it does no material which is not present in the final version (recorded in Volume 8) or in the unpublished first version—now preserved in the Bibliothèque Nationale in Paris. The twelve pieces correspond in their broad outlines through all the extant versions, but each revision extends phrases—very often to avoid four-bar predictability (yet this very predictability is what gives some added attraction to the original version as a possible vehicle for children to play). In the case of the second piece, the original version is tiny by comparison with the much longer piano piece and choral work which it was to become. Most of the introductions and codas underwent enormous change and expansion, particularly Nos X and XII. It is a pity that the original version has never been published (nor its arrangement for piano duet, also to be found in Paris, attached to the solo version) because it completely avoids the occasional risk of longueur presented by the final version which may be a factor in its relatively rare appearances in concert.

The original unpublished manuscript of À la chapelle Sixtine—Miserere d’Allegri et Ave verum de Mozart is held in the Goethe-Schiller Archive in Weimar. It shows a great deal of reworking and cancelled first thoughts but, in the light of the final published version (see Volume 13) it is interesting to see that the long recapitulation of both the Allegri and the Mozart sections was contemplated but rejected in the original version, and the musings in the coda combine elements of the two themes somewhat more assiduously than in the revision. The general tenor of the piece is the same: a set of variations on the opening of Allegri’s motet, and a more-or-less complete transcription of Mozart’s motet. The early version outstrips the later in the level of terror raised at the climax of the Miserere before the consolation of the Ave verum sets the work at peace.

As there has been frequent occasion to remark, Liszt’s so-called simplified versions somehow never manage to have any real understanding of the limitations of the amateur attached to them. The three Ungarische National-Melodien (Im leichten Style bearbeitet) make some attempt by transposing the first two numbers down a semitone. But there remain complications in the third which would have ensured that no great-aunt’s drawing-room piano would ever have been likely to sport a well-thumbed copy. (For the original version see Volume 27; for the grandest versions see Nos 5, 4 & 11 of the Magyar Dalok—Volume 29; there is also an album-leaf version of the first piece, and all three eventually feature in the Sixth Hungarian Rhapsody.) The thirteenth of the Magyar Rapszódiák (see Volume 29) also appeared in a simplified version as Ungarische National-Melodie, and whilst it is by no means as fiendishly difficult as the concert version, neither is it children’s work.