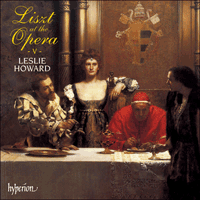 The complete music for solo piano, Vol. 50 - Liszt at the Opera V

Leslie Howard joins Liszt on what will be their penultimate trip to the opera. Some of Liszt's most virtuosic transcriptions from his years of fame as the world's greatest pianist (he was to retire from the professional stage in 1848) are here, including the rarely recorded transcription of the 'William Tell' Overture—a stunning warhorse with which Liszt used to end his concerts throughout the 1840s.

‘He plays here not only with his usual technical facility and understanding of the Lisztian idiom, but also with verve, wit, and an enjoyment that he conveys to the listener’ (American Record Guide)

This penultimate collection of Liszt’s great series of piano pieces based on operatic themes opens with one of the most imposing: the original version of the Huguenots fantasy. It was probably only a question of length which caused Liszt to make the serious cuts that lead to the final version of this work—and an intermediate version, with two optional cuts and a new last page appeared not to satisfy the Master, either. But there is much to be said for the sheer expansiveness of this piece in its first edition which, like all Liszt’s fantasies based on music of Meyerbeer, calls forth some of his finest flights of fancy. The greatest difference between the present text and that which has already appeared in Volume 42 of the present series is the long section given over to the andante from the lyrical duet of Raoul and Valentine, ‘Ô ciel! où courez-vous?’. The whole fantasy is based upon this long duet, which is certainly the finest thing in Meyerbeer’s score, and it is strange to reflect that it was a very late addition to the original opera.

The original version of the La fiancée fantasy dates from the same year as the opera upon which it is based (1829) and is the first of Liszt’s mature works based upon operatic themes. He revised the piece in 1839 and reissued it in 1842, in what the Neue Liszt-Ausgabe somewhat ingenuously describes as a ‘third’ version, with alterations so tiny (the piece is bar-for-bar the same as the second version, a few wrong notes are corrected, and half-a-dozen accompanying chords are slightly redistributed) that the second version does not merit separate performance or recording. The whole piece is based on the tenor aria from the second act of the opera, and is really an old-fashioned introduction, theme, variations—each with its concluding ritornello—and coda. In the revised versions Liszt dropped the original second variation, and shortened the introduction. The martial variation 2 (variation 3 in the first version—see Volume 42) now begins in F sharp major before reverting to A, and the Barcarolle (now variation 3) is anticipated in the revised introduction in C major.

The Zwei Stücke aus ‘Tannhäuser’ und ‘Lohengrin’, of which the Einzug der Gäste auf der Wartburg is the first piece (for the second, Elsas Brautzug zum Münster, see Volume 30), first appeared in print in 1853. For the reissue in 1876 Liszt made a few alterations to the first number, and in subsequent editions, the original text is usually printed with the later alterations as footnotes. Since the ternary structure of the transcription entails a large literal repeat, it is possible to include the details of the later edition (not the variant simplifications) in the repeated section without doing any violence to the work. This repeat is, in any case, Liszt’s own invention to round off the work as a concert piece; in the opera—Act 2 Scene 4, the Song Contest at the Wartburg—the march and chorus move into a further slower march for the entry of the minstrels, which music recurs in another key towards the end of the scene. Liszt turns these two 32-bar periods into a trio section and composes a brilliant modulating return to a shortened version of the march.

The Tarantelle from Masaniello has already appeared in this series (Volume 42) with the much later alterations made for Sophie Menter. Here is the original version (there is also a ‘second edition’ which is virtually identical to the first, except that it authorizes the elimination at will of the ‘variation’—bars 253–292) with its relentless left-hand octaves in the closing pages. Both versions were published in tandem in the Liszt Society Journal, 1995. The Tarantella, one of several grand dances in Auber’s popular opera, comes as a central interlude in Act 3. Liszt treats it to an introduction and variations, and then employs the victory chorus from Act 4 (also heard in the overture) to make his coda, ingeniously combining the two themes.

As he did so often in the early fantasies, Liszt composed his piano work within the year of the first performance of Halévy’s most celebrated work La juive. Using motifs from Acts 3 and 5, Liszt produced a work of much originality; the shape of the opening Molto allegro feroce is entirely his, even if the thematic fragments are Halévy’s, and it is not until the recognizable martial chorus (Marziale molto animato, from bar 131) that he uses a whole theme. The succeeding Boléro is only loosely based on Halévy, but is the theme for two variations. The Finale (Presto agitato assai) begins as if it were a third variation but gives way to frenetically foreshortened recollections of the march and the introductory material. The ferocious opening foreshadows the ‘infernal’ music of Liszt’s Weimar period, but also shows immediate kinship with the Valse infernale from Meyerbeer’s Robert le diable, with which the La juive fantasy was reissued—along with the Huguenots fantasy and the Don Giovanni fantasy—in about 1842.

The Niobe fantasy has always been familiar in Liszt legend, even if the music itself is very rarely heard, because it was a piece he played in his famous ‘contest’ concert with Thalberg in 1837. Pacini’s vast output—almost ninety operas—has been moved long since to the library stacks, whence it seems unlikely to emerge. But his little cavatina ‘I tuoi frequenti palpiti’ (‘Your frequent flutterings’) proved an exceptional vehicle for Liszt, both as a composer and as a public performer. The long opening section is based upon a mere fragment of the aria, and is treated with a humorous ingenuity. The lyrical slower section elaborates a simple melodic idea with extravagant ornaments in imitation of the operatic practice of the day. The introductory material returns, with even more brilliant harmonic excursions, culminating in the use of the whole-tone scale (Liszt’s first use of it as far as the present writer can determine) and finally Pacini’s theme appears complete, but immediately subjected to fantastic variation and ever-increasing urgency as the piece flies to its frolicsome conclusion. (This piece, published as Opus 5 No 1—followed by the Fantaisie romantique sur deux mélodies suisses and the Rondeau fantastique sur un thème espagnol: El contrabandista—, is performed on this recording from the original Schlesinger edition, and under its original title. The reissues bear the title Divertissement sur la cavatine ‘I tuoi frequenti palpiti’ de Pacini, and differ musically by making two small cuts, of one bar before the central Larghetto and of nine bars before the final Stretto, and with a number of simplifications to the technical requirements.)

The Festspiel und Brautlied (‘Festal Music and Bridal Song’) from Wagner’s Lohengrin was issued with two other numbers transcribed from the same opera in 1854. The first number was revised for the 1861 edition and that version has appeared along with its companions in Volume 30. The chief differences between the two versions are: that the whole of the Prelude is repeated in the first version, whilst in the second it is truncated; and that the textures of the first version, especially at the big brass melody in the Prelude, are much lighter. (The central Bridal Song is unchanged.)

Liszt first composed his Sonnambula fantasy in 1839, and the final version of it appeared in 1874 (see Volume 42; the first version will appear in Liszt at the Opera VI). The final version was clearly made using a copy of the first version as a starting-point, and Liszt seems to have forgotten that he had made a second version, for the Ricordi edition, soon after the first one. (To make matters more confusing, but to be completely accurate, there was an edition before the ‘first version’, which is note-for-note identical but lacking almost all dynamics and performance directions, hence the description on the definitive first version ‘nouvelle édition, revue et corrigée par l’auteur’.) The structures of the three versions are very similar, apart from the new coda to the third version: all begin with Liszt’s elaborate musings upon the chorus from the finale to Act 1 ‘Osservate’, and continue with the lyrical duet ‘Vedi, o madre’ which Liszt develops into a marvellous imitation of three hands, with the melody and the accompanimental chords taken by the left hand, and rapid decorative figuration by the right; after a brief reprise of the opening and a cadenza comes Amina’s ‘Ah! non giunge’ (the most striking difference in the second version—there are many minor alterations—is the first appearance of this melody, which is presented here as if it were scored for a quartet of horns), the similarity of which theme to Elvino’s ‘Ah! perche non posso odiarti’ is underlined by the arrival of the second tune over the top of the first one; the only further theme is the concerted number from the Act 1 finale ‘Voglia il Cielo’. As with all of Liszt’s Bellini fantasies, there is a real attempt to convey the whole spirit of the drama in the comparatively microcosmic world of a single piano piece.

It seems scarcely imaginable that there could ever have been a time when anyone was unfamiliar with the overture to William Tell, and countless abuses of its themes in cartoons, movies and television shows have not dimmed its attractions. Nonetheless, at the time when Liszt made his transcription, the piece was still in need of dissemination. Of course, it also provided a stunning warhorse for Liszt’s own concerts—and it was no doubt much easier to bring off the wicked repeated notes on the light French instruments of the 1830s than it is on the mighty Steinways of the 1990s. Naturally, this is a case of faithful transcription rather than paraphrase of any kind. But the piece must have posed some problems even for Liszt the executant, because there are many passages where alternative solutions are offered. (In this performance all of the ossia passages are adopted.)

Liszt made his first fantasy on themes from Lucrezia Borgia very shortly after the opera’s Paris premiere in 1840. The piece was later revised as the second of two pieces which constitute the Réminiscences de Lucrezia Borgia, which appeared in 1848. The work is based on several themes from the opera, which in the later version are rather loosely described in the subtitle as Chanson à boire (Orgie) and Duo-Finale. (The 1ère partie is described as the Trio du second Acte, but the number in question is in Act 1.) The material which opens the fantasy is really pure Liszt, but at the first tempo change we hear Orsini’s ‘Maffio Orsini, son io’ from the Prologue, and then immediately the piece moves into his drinking song ‘Il segreto’, which Liszt extends with another theme from the Stretta of the Prologue. The duet of Lucrezia and Gennaro ‘Ama tua madre’ provides the central respite from the general boisterousness, and a second quieter section (eliminated in the second version) is a gentle transformation of the drinking song. Orsini’s theme returns, and the Stretta of the Prologue furnishes the conclusion.