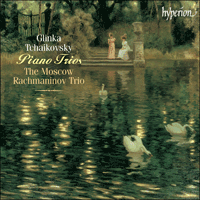 The lyric charm of these two lamenting trios is all-encompassing of Romantic Russian chamber music, and is reflected in the empathy of the performances by this outstanding Russian trio. Glinka's Trio was originally scored for clarinet, bassoon and piano, but—especially in Russia—the music is more often heard in this version. The original use of wind instruments may have led Glinka to encapsulate the work into four relatively brief movements; in any event, the Trio is beautifully composed and proportioned. It is prefaced in the score by a quotation in French which can be translated as 'I have known love only through the unhappiness it causes'—the consequence of a series of unsuccessful love affairs.

Tchaikovsky's heartbreak was the untimely death of Nikolai Rubinstein in 1881 aged only 45, and soon after he composed his only Piano Trio in his dear friend's memory. Elegiac throughout reflecting markings in the score such as piangendo (weeping), both this trio and Glinka's are perhaps musical manifestations of the saying: 'When a Russian is sad, he is very sad: when a Russian is very sad, then he is at his very best.'

Outside the Germanic and Austro-Hungarian tradition, one of the important countries whose composers (in the late nineteenth and early twentieth centuries) contributed most to the piano trio repertoire was Russia. This was an extraordinary phenomenon, given Russia’s ‘late start’ in classical music-training and scholarship.

It was not until the early 1860s that a formal music conservatoire was established in Russia, initially directed by the great Anton Rubinstein, who founded the St Petersburg Imperial Conservatoire in 1862. His younger brother Nikolai became director of the rival Moscow Conservatoire when it opened in 1866.

It would be wrong, of course, to assume that no musical education existed before 1862; and if – equally – one cannot claim that no Russian composer flourished before Mikhail Glinka (1804-1857), there is no doubt that he was the first truly important Russian composer, considered by Russians to be the ‘musical acorn’ from which the mighty oak tree of Russian music was to grow.

When Louis Spohr visited St Petersburg in 1802 he was surprised to learn that the city’s musical life was dominated entirely by foreign musicians. More than a century earlier the Eastern Orthodox Church, which remained a powerful governing force, had proclaimed a ukase which instructed that ‘musical instruments were to be broken up and burned’ – and not merely, it seemed, in places of worship (although the Church does not permit musical instruments to this day). It was into this ethnically empty musical world that Mikhail Glinka was born in 1804. Fortunately, his father’s wealth and cultural aspirations enabled him to study music after a fashion, but the youth was determined, if possible, to bring a Russian character into the music which he wanted to write. This was not easy; nor was it soon achieved.

‘I want my work to be completely national’, Glinka is reported to have said, ‘in its subject and in the music’. It was some time before he achieved this, most completely in his first opera A Life for the Tsar. This dates from 1836, several years after the young composer had returned from Italy and after he had completed his Trio pathétique, which for many years was thought to date from 1826 or 1828, but which is now known to have been composed in 1832. It was not published until 1878, in Moscow.

The Trio is in four movements which follow one another with but a short pause between them. It was originally scored for clarinet, bassoon and piano, but – especially in Russia – the music is more often heard in the version for violin, cello and piano recorded here. The original use of wind instruments may have led Glinka to encapsulate the work into four relatively brief movements; in any event, the Trio is beautifully composed and proportioned.

Another extraordinary aspect to the work is its date: whether begun in the late 1820s (when Beethoven and Schubert may have been alive) or 1832, it is a remarkably assured composition, a genuine budding (rather than flowering) of early Romanticism against a relatively strict classical four-movement structure. It is in D minor, and Nicholas Slonimsky once concluded his thoughts on the work by saying that the ‘Glinka Trio reflects the cultured westernised fashions of the upper classes in feudal Russia’ – a comment with which it is difficult to disagree, assuming that we keep two things in mind: the date of its composition, and that it appeared before the ‘Russianisation’ of Glinka’s music.

The Trio is prefaced by a quotation in French, which may be translated as ‘I have known love only through the unhappiness it causes’. In 1832 Glinka had several love affairs, none of which lasted. No doubt his lack of amatory success led him to express his unhappiness in the slow movement of the Trio. The sturdy first movement announces a serious mood in a wholly integrated exposition. The writing is remarkable for a 28-year-old composer of the time whose training had both begun late and was somewhat spasmodic. The exposition’s two themes (and the movement’s textural qualities, particularly a unison descending phrase which punctuates the music at strategic points) are admirably balanced and cleverly worked. The emotion is also finely controlled, and the fleeting Scherzo and Trio does not let the sense of forward momentum overshadow the contained power of the opening movement. If there is relatively little in the first two movements to warrant the ‘pathétique’ appellation, in the ‘Largo’ Glinka’s deeply felt emotion is kept on a relatively short chain, although the structure – a lengthy first part featuring the violin, succeeded by a second varied restatement on the cello, and a third (in which the piano writing is more decorative than merely supportive) – permits the emotional expression to be crystal clear.

The finale retains the tragic character of the slow movement. This is no ‘brilliant’ finale, but a surprisingly passionate conclusion which at times recalls Beethoven. If one feels the relative brevity of this movement does not fulfil the implications of the material, (the ending is somewhat abrupt), in the overall structure the movement’s sense of balance is far from being ill-judged. Glinka’s Trio remains a genuine and, in its singular way, seminal work in the annals of Russian chamber music, ending with a descending chromatic phrase that presages the opening and closing bars of Rachmaninov’s Trio élégiaque Opus 9.

On 23 March 1881 Nikolai Rubinstein died in Paris at the age of 45. His unexpected death came as a profound shock to his family and friends. Among the latter was Tchaikovsky who, whilst in Rome towards the end of the year, began composition of a piano trio in his memory. The work fulfilled several criteria: it was a ‘memorial’ work which contained a virtuoso piano part (after initially criticising Tchaikovsky’s B flat minor Concerto, Nikolai became one of its ardent champions), and Tchaikovsky’s patron, Mme Nadezhda von Meck, had harried the composer to write a trio for ‘her’ ensemble (a group which she supported financially, the pianist in which at the time was Debussy).

Tchaikovsky’s Trio in A minor, Opus 50, was his only work for this combination, and for reasons that appear to have nothing to do with the quality of the music it has been somewhat neglected. It is a wholly original masterpiece, demonstrably Tchaikovsky’s finest chamber work. It is constructed on a large scale and falls into three movements, but the second and third are described as ‘IIa’ and ‘IIb’. This unusual description of the structure is explained by the second movement being a set of theme and variations (IIa). The final variations (IIb) are different and (as a group) conclude the Trio to constitute a distinct finale.

As a sonata structure the opening movement is Tchaikovsky’s largest (the first movement of the Fourth Symphony has an introduction not part of sonata form as such). In the large first movement of the Trio, Tchaikovsky’s treatment of the basic tonality (its relationships to the mediant, both major and minor) is shot through with astonishing examples of his genius. This is important, for it explains both the indestructible nature of the basic form (in other words, the firm structure on which the movement – and ultimately, the entire Trio – is built) and the underlying fascination of the music, which calls us back to it again and again. It also goes some way to disabuse those who claim that the movement is too long.

The first movement opens, as we might expect, in sombre mood, ‘Moderato assai’, with a haunting theme on the cello above a flowing, barcarolle-like piano accompaniment. The theme begins on E – and Tchaikovsky’s masterly symphonic thematicism grows from this note. The tumultuous outpouring which makes up the main part of this movement, ‘Allegro giusto’, is one of Tchaikovsky’s most sustained stretches of passionate, intense activity. There are two second subjects, both in E major (whereby Tchaikovsky abjures customary classical precedent), and the broad vista which such a tonal juxtaposition opens up accounts for the length of the music. The working is brilliant, the instrumental writing is virtuosic and wholly characteristic of this composer, and the emotional make-up is thrilling and deeply moving.

The variations of the second movement constitute one of this composer’s finest sets – of which, as we know from other of his works, he was a master. The simple theme itself, given by the piano alone, in E major, is original. It has been claimed that the variations are character-pieces inspired by aspects of Nikolai Rubinstein’s life and personality, which may be true. The variations include a mazurka and gigue early on, but we should approach this music in the abstract; tonally, the first three variations keep to E, and the fourth falls to the relative minor, C sharp. The fifth variation, in C sharp major, has the piano delicately tracing at the very top of the keyboard; a sustained C sharp on the cello, now the mediant of A, brings a lyrical waltz. The succeeding variations (including a fine three-voiced fugue – referring to Rubinstein’s academicism?) return, via related keys, to C sharp minor, in which key the movement quietly ends.

The finale is headed IIb, and – in a vivid A major (C sharp being the mediant of this key) – a new heroic theme appears, related to the theme of the variations. This brings a secondary theme, whose outline is already vaguely familiar, leading to an immense flowering of sustained symphonic development. Once more, Tchaikovsky stuns us with his mastery, until a vast variation-coda in A minor gradually causes the music to fade in intensity, and to end the Trio, Lugubre, with cello and violin phrases, piangendo (weeping), recalling the work’s opening pages.

Tchaikovsky’s death in 1893 was as sudden as Rubinstein’s had been. On the day he heard of it, Rachmaninov began the second (and larger) of two works which he entitled Trio élégiaque. When Rachmaninov died in exile in Los Angeles in 1943, the Russian pedagogue and composer Alexander Goldenweiser composed a piano trio in Rachmaninov’s memory; and there are other Russian works in this ‘elegiac chain’ (notably Shostakovich’s Second in E minor, Opus 67, written in memory of Ivan Sollertinsky). These are the more significant pieces in this remarkable body of memorial trios – perhaps a musical manifestation of the saying: ‘When a Russian is sad, he is very sad; when a Russian is very sad, then he is at his very best’.