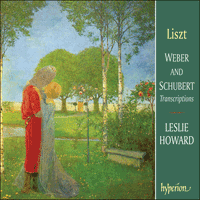 This forty-ninth volume in Leslie Howard's all-encompassing Liszt series focuses mainly on Liszt's activities as an editor. This work was quite separate from his work as a transcriber (where he would recreate the music of others on his own terms). In his editions of Beethoven, Weber and Schubert we find a respect for the original text quite exceptional for the time. This did not, however, prevent Liszt from offering textual alternatives (always clearly differentiated from the original composition in the scores) either to modernize the piano writing (for example, in the finale of the 'Wanderer' Fantasy) or to make the work performable as a concert solo (the Konzertstück).

These works offer a fascinating insight into Liszt's approach to the performance of the music of others and were until now a totally neglected area of his output.

The disc is completed by two 'regular' transcriptions: the recently identified third version of Die Rose, and Weber's 'Jubel' Overture.

‘A very good pianist, who understands the Lisztian idiom and presents it with great effectiveness’ (American Record Guide)

The seeming endlessness of Liszt’s output is further compounded when one examines his work as an editor. His name appears on so much music in this capacity that one is entitled perhaps to question how much actual editing Liszt did. Certainly he can be said merely to have overseen corrected reprints of much music to which he may only have added a few fingerings. But, as well he knew, the lustre of his name meant sales and the further propagation of the music which he loved and which he wanted others to know and enjoy. Liszt’s name appears on editions of the Beethoven Sonatas, but the text is very clean and, by the standards of the day, accurate. Here, as in other similar editions (the Beethoven Masses, piano music and chamber music, major Bach organ works, Bach Preludes and Fugues in C sharp minor, Chopin Études, Field Nocturnes, Handel Fugue in E minor, the Haydn Piano Trios (not listed in the usual catalogues), Scarlatti ‘Cat’s Fugue’ or Viole’s Études Gartenlaube) he is generally reissuing previously published texts—there is no evidence of a return to manuscript sources. Other works of his own appeared in tandem with some of his editions: the Bach organ works include Liszt’s piano transcriptions of seven major pieces, the editions of the Beethoven Piano Concertos Nos 3, 4, and 5 contain Liszt’s own reduction of the orchestral parts for a second piano—and for both pianos whenever the solo part is silent; his reworkings of Gottschalg’s arrangements of various Liszt works make them into his own transcriptions; and there is a special group of pieces where Liszt presents a reissue of a clean published text with his own annotations clearly distinguished on separate staves. These ossia suggestions are sometimes just for a few notes or a short passage, where he may indicate slight alterations to the original text (Schubert dances, Weber sonatas, Hummel Septet) and sometimes, as in several examples in the present recorded programme, his alternative passages amount to extensive rethinking of the textures, amounting to transcriptions in all but name. It must be emphasized that, even in these cases, the original text is presented without adornment and Liszt’s alternatives are printed separately, usually in smaller type.

Liszt’s predilection for Schubert’s Grosse Fantasie (better known as the ‘Wanderer’ Fantasy—[tracks 1– 4]) became almost a preoccupation. Schubert’s masterpiece contains the kernel of Liszt’s own system of thematic transformation and the unity of several movements in one. Liszt produced a famous version of the work for piano and orchestra (and one for two pianos) by about 1851, but the version for solo piano is much later. Schubert’s text is presented with many an alternative suggestion for the first three movements, either to replace some of Schubert’s less pianistic textures (it must be remembered that at the time practically everybody, from Schubert onwards, declared the work unpianistic and unplayable as it stood) or to take advantage of the greater compass of the keyboard in the mid-nineteenth century. In the final section Liszt offers a completely independent text printed after Schubert’s original, in which the fearsome arpeggios and semiquavers are all but eliminated and the texture is much more orchestral. Naturally, these days everyone plays Schubert’s original text, but without this interesting arrangement, valid in its own right as more than merely a testimony to late-Romantic practice, the work might never have reached the general repertoire.

Amongst Liszt’s other Schubert editions, two stand out: Liszt edited all of the Impromptus, with minor suggestions of occasional alternative passages or distribution of material between the hands, but nothing in any of the remaining Schubert editions would justify a place in the Liszt catalogue as transcriptions except the two works recorded here. The Impromptu in E flat major (5) has so many clever little proposals to make a fuller texture and vary repeated phrases that the extra systems printed above the main text pretty well amount to another work altogether. The Impromptu in G flat major (6) has only one alternative passage: its recapitulation is astonishingly rearranged with fulsome left-hand arpeggios and the melody played an octave higher reinforced with chords in the right hand; the rest of the piece is unaltered in any way. (This work appears in Liszt’s edition, as in so many nineteenth-century printings of the piece, in G major, and in four crotchets to the bar rather than eight. Liszt was apparently unaware of the original key, which is restored here, and in which Liszt’s altered passage can be just as readily performed.)

One of the hazards of the present undertaking is that, despite considerable effort, the occasional unforeseen text turns up in a library, often proving to be a different version from all previously encountered publications of a piece. (The rare intermediate versions of the Sonnambula and Huguenots fantasies are cases in point.) Liszt’s first transcription of Die Rose, along with the final version, appears in the nine discs of Schubert transcriptions already released as volumes 31 to 33 of this series. But a Richaut edition of 1837/8 of a selection of the early Liszt transcriptions of Schubert songs contains a version (7) which is best described as a half-way house between the two, and is included here by way of a pendant to the discs of song transcriptions.

Jubelouvertüre (8) is, of course, a bona fide transcription rather than an edition: Weber’s original work, his Opus 59, dates from 1818, and was composed for the Golden Jubilee of King Friedrich August I of Saxony, hence the reference to the anthem Heil dir im Siegerkranz (whose melody is that of God Save the Queen). Liszt’s transcription, which was issued with his arrangements of the overtures to Der Freischütz and Oberon (as Carl Maria von Webers Ouvertüren—Clavier-Partitur von F. Liszt), is faithful to the original in the same manner as is found in his famous transcriptions of the Beethoven symphonies. (Long out of print, although briefly available in a rare Russian volume of transcriptions, this piece has recently been beautifully produced alongside its companion overtures in volume II/23 of the excellent Neue Liszt-Ausgabe.)

Liszt prepared the four sonatas and six other works of Weber in practical editions for publication in 1868 and 1870. Corrected reprints were issued in 1883. The six other works include the Momento capriccioso, Op 12 (which had been in Liszt’s repertoire since he was eleven years old), the Grande Polonaise, Op 21, the Rondeau brillant, Op 62, the Invitation to the Dance (the oft-encountered references to a Liszt paraphrase of 1843 upon the same work seem to be inaccurate—in any case, the text here is not only presented unencumbered by additions, but also the interested performer is urged in Liszt’s footnote to acquire the concert versions of Henselt or Tausig), and the Polacca brillante, Op 72 (which has nothing to do with the version on this recording). They are preceded by the version for solo piano of the Konzertstück, Op 79 (9), composed for piano and orchestra by Weber in 1821. (This edition also contains Liszt’s further suggestions for alterations in the solo part for performance with orchestra, which will appear later in the present series with the other Liszt works and arrangements for piano and orchestra.) Liszt incorporates the reduction of the orchestral parts and the original solo part on the same two staves (as it had appeared in earlier editions—the original arranger of the orchestral part is not given). Liszt provides many suggestions of alternative texts and, where necessary, of a combination of the solo part and its orchestral accompaniment playable—even if with difficulty—by two hands. The structure of this single-movement concerto was of great importance to the development of Liszt the composer. Liszt first played the work in 1833, when he was not yet twenty-two, and Weber’s fusion of several sections into one movement was to be a lifelong influence upon him, if not quite such an obsession as the Schubert ‘Wanderer’ Fantasy.

Liszt made his delightful arrangement of Weber’s Op 72 Polonaise brillante for piano and orchestra by the end of 1851. He also issued at the same time a version for two pianos and the present version for piano solo (10); all follow the same basic text. Whereas the transcriptions of the Jubelouvertüre and the Konzertstück adhere completely to Weber’s text, that of the Polonaise is somewhat freer: Liszt begins with an introduction derived from Weber’s own introduction to his Grande Polonaise, Op 21, transposed up a semitone, and continues with forty bars of fantasy upon themes of the polonaise which is to come. Then, apart from the occasional embellishment, things proceed in a similar manner to the original until the coda, which Liszt extends by just a few bars.