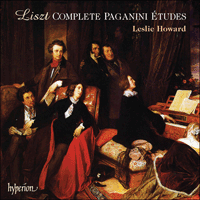 And still they come! Liszt Volume 48 is fundamentally about the Paganini Studies, and in particular features the impossibly difficult 1838 first versions of what became the Grandes Études de Paganini.

Paganini's violin virtuosity was the primary catalyst for Liszt's quest to explore the limits of pianistic virtuosity, and these works, along with the 12 Transcendental Studies, are thus his definitive statements on piano technique.

‘[Howard] can play anything that Liszt wrote, it seems, and be as intelligent and sensitive’ (Classic CD)

This recording completes the survey of Liszt’s piano études with every version of all the studies based upon music by Paganini. The intermediate version of Mazeppa and the only free-standing composition in the Technische Studien are added as an envoi.

Liszt first heard Paganini in April 1831 and was so entranced by the unfettered expressiveness of his playing, Paganini’s ability to turn to utterly musical account a technique of legendary transcendence, that the young composer immediately declared his intention of achieving upon the piano an equivalent new technical mastery in order to unleash musical thoughts which had remained hitherto inexpressible.

In 1966 Peter Gammond published an amusing and enlightening wee volume called Bluff your way in Music in which he ruefully observed: ‘One cannot help feeling sorry for Paganini—as a composer he has never been rated very highly yet seemed to supply a lending library of themes for everyone else.’ This was an aside in an article about Rachmaninov but it is clear that Liszt and Schumann (who rated Paganini very seriously as a composer, as indeed should we all) began the happy trend of writing pieces on Paganini’s themes in 1831/2, Schumann first with a sketched work for piano and orchestra and then his first set of studies (opus 3) on Paganini’s Caprices, Liszt following with his Grande Fantaisie de bravoure sur ‘La Clochette’, based upon the third movement of Paganini’s Second Violin Concerto. Schumann later wrote a second set of piano studies and at the end of his creative life wrote piano accompaniments to the Caprices (an accomplishment which was echoed even later by Szymanowski). Liszt wrote a set of six studies in 1838, sketched a further fantasy on the ‘Clochette’ theme and the Carnaval de Venise (another set of variations on this latter theme exists in a copyist’s manuscript but may not be authentic) in 1845, and rewrote the six studies in 1851.

Paganini’s Twenty-four Caprices, Op 1, for unaccompanied violin were composed during the early years of the nineteenth century and pay homage to a like-named work by Pietro Locatelli. They were published in 1820 and were of incalculable influence upon whole generations of violinists and, just as importantly, composers. They form the basis for all but one of Liszt’s Études d’exécution transcendante d’après Paganini, and Liszt remains very faithful to Paganini’s text. (It is interesting that, although these works are really transcriptions, they are always catalogued and published as original Liszt works. Certainly there is a wealth of original thinking in what Liszt wrote, but the basic material and structure remain Paganini’s.) The various alternatives and the later revisions as Grandes Études de Paganini follow the same sources as the earlier set, so the following notes address both volumes simultaneously. Liszt dedicated the 1838 set of studies to Clara Schumann and, for all her carping ingratitude, went on happily to dedicate the 1851 set to her as well.

For the first study Liszt employs the sixth of Paganini’s Caprices, but adds transpositions of the introduction and coda to No 5 – grand arpeggios – in the equivalent places. Paganini’s work imitates two violinists at once, the one playing a lyrical melody, the other a tremolando accompaniment, mostly in thirds. In his first version (track 7), Liszt uses just the left hand to practise a similar feat, and the right hand joins in as his pianistic devices become more complicated. In the first edition Liszt arranged for the text of Schumann’s study on the same work to be printed above his own as an alternative text (13). Schumann makes almost no attempt to imitate the violin tremolos and has a completely different solution in triplet chords. Liszt, of course, intended the parallel to be a homage to Schumann whom he constantly admired, but Clara took offence, thinking that Liszt had wanted to show his superiority. In the later edition (1) the Schumann no longer appears, two hands are required rather sooner, the technical demands are somewhat moderated, and the spirit is generally more reflective.

Liszt’s second study is based on Paganini’s seventeenth Caprice. Apart from the familiar thinning of textures, the second version (2) sounds similar to the first (8), but the differences in the arrangements of the hands to make the best musical solutions between the one version and the other are subtleties worthy of close observation. (For many years it was the fashion to ‘improve’ the little valedictory coda Liszt composed for this work with a crass flourish. Fortunately this practice has almost entirely ceased.)

The third study is commonly known by its title in the second edition, La Campanella, a reference to the little bell employed by Paganini in the rondo of his Second Violin Concerto. Uniquely in this study, Liszt does not preserve Paganini’s original tonality (B minor) or structure. In the ‘Clochette’ Fantasy, Liszt transposed the main theme and a ritornello theme from the Second Concerto into A minor. In the first version of the study (9), he used A flat minor—which puts all the nastier leaps between black notes, which are much easier to target—and mixes in a repeated-note elaboration of the first theme of the rondo of Paganini’s First Violin Concerto transposed into A flat major from the original D major (or E flat, as Paganini first conceived it). This study turns out to be quite a boisterous affair and could not be in greater contrast with its second version (3), now in G sharp minor (for ease of reading, no doubt) and with the theme of the First Concerto expunged. La Campanella has, over the years, often been utilized by unthinking players as some gigantic warhorse, whereas (and just listen to Joseph Lhévinne play it—even on a piano-roll!) it is clearly a study in quiet playing with a mystical quality to it. It is marked Allegretto until the last pages and only grows in volume towards the end. Forte never occurs, but fortissimo is indicated once—just for the last eleven bars.

Paganini’s first Caprice (which quotes Locatelli’s seventh) is the basis for Liszt’s fourth study. In the first edition it appears in two versions, the one accompanying the original arpeggiated chord with further arpeggios in the left hand (14), the other doubling the arpeggios in both hands (10). Even though they are both marked Andante quasi Allegretto, they inhabit the very edge of the technically possible with their stretches, leaps and hand-crossings. Liszt adds grand melodic lines in counterpoint to the straightforward broken chords of the original. In the 1851 version 4 the piece is marked Vivo and the music is printed, uncannily like Paganini’s original to the casual view, on one stave; the hands intrically alternate in a neatly woven replica of the Caprice, shorn of all added melodies.

La Chasse is the nickname often given to Paganini’s ninth Caprice—a study in double-stopping—as well as to Liszt’s fifth study which is based upon it. Both Paganini and Liszt mark the opening theme as imitando il flauto, and the lower repetition as imitando il corno. The spiccato phrases tossed from one register of the violin to another in the middle section are cleverly adapted by Liszt, right down to some rather violinistic fingering which produces just the right articulation. The first version (11) is somewhat thicker in texture than the second (5), and Liszt’s staccato scales in octaves and chords in the first version become double glissandi in the second. The first version also has a simpler alternative text for the majority of its length. This produces in effect another version of the work whose character is quite different, and so it is included here (15).

The twenty-fourth Paganini Caprice is certainly the best known, or at least its theme is, since it has been widely employed by so many other composers for variations of their own. Paganini wrote eleven variations and a coda, and Liszt sticks to this plan in both editions of his sixth study. The many differences between the two Liszt pieces cannot be enumerated here; the second version (6) is, as one would expect, not as monumentally treacherous as the first (12) and the textures vary enormously—especially in Variation IX with its different attempts to compensate for the wondrous effect of left-hand pizzicato on the violin.

Mazeppa (16) is easily recognized as the immediate precursor of the fourth of the Transcendental Studies (see volume 4 of this series), and of the later symphonic poem. It is a slightly reworked version of the fourth of the Douze Grandes Études (see volume 34) where it bore no title. Now, with a new introduction and coda (and, in the present performance, taking the opportunity to present Liszt’s ossia text for all passages where he provides one) the work takes on a programme: the career of the hero of Hugo’s poem—itself a homage to Byron’s—describing the wild ride of Mazeppa tied to a galloping horse and surviving in triumph.

According to a Liszt letter, the Technische Studien (a series of technical exercises exploiting the widest range of keyboard technique) were begun in 1868. They must have been completed by 1871, as Imre Mezð has shown in his excellent edition. Now, whilst it is, one hopes, clear that the present series of Liszt’s music for piano solo is intended to be as complete as scholarship will allow, the line must be drawn at this work. Wonderful as they are, Liszt’s methods for practising scales, arpeggios, chords, repeated notes, and a hundred things besides, usually through all the keys, do not make musical compositions and would be as interesting to most listeners as a dripping tap—and they would fill half a dozen compact discs with ease! The only example to be included here is the sole exception in the entire oeuvre: a little two-page effort that is a piece in itself, in which tremolos and leaps are studied. This number (17) is part of the third section of Liszt’s work which went missing in 1874 and which he thought he would have to write out again, but did not, and which turned up as recently as 1975, settling for ever the doubts that the ‘12 große Etüden’, as this volume was called, were anything other than technical exercises rather than composed studies similar to Liszt’s other famous works of like title.