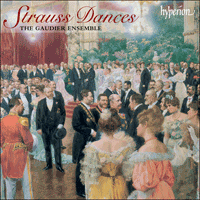 Among the public meeting places of nineteenth-century Vienna, the dance hall held a prominent position. According to one's social class or the time of year, the location might be an urban dance hall, a rural open-air gathering, or some grand society location. There the latest dance creations vied for attention with the old favourites. Of the dance styles that prevailed, those that enjoyed the greatest popularity during the period included the waltz, polka and galop. Among the dance-musicians, none rivalled the various members of the Strauss family. Increasingly, their compositions have been perceived to rise above the normal limitations of the dance form, becoming at times miniature tone poems. From the dance halls of Vienna their music spread around the globe, creating a demand which they helped to satisfy with tours of their own. During the 1830s and 1840s, the elder Johann Strauss (1804-1849), the founder of the dynasty, made gruelling trips around Europe by coach. Later, tours by his three sons - Johann the younger (1825-1899), Josef (1827-1870) and Eduard (1835-1916) - helped to develop the family's popularity still further.

Reductions in orchestration were made at that time by the elder Johann in order to meet the demands of smaller ensembles. More recently, a Viennese musicologist has made reductions in a similar style, and it is a selection of such arrangements that The Gaudier Ensemble plays here.

‘Played with a controlled panache that adds extra fizz to the music’s already infectious gaiety’ (Classic FM Magazine)
‘The Gaudier Ensemble regularly wins rave reviews here and elsewhere. This disc easily sustains their reputation as ideal in every way. Sad must be the soul who would not be enchanted by this release’ (Fanfare, USA)
‘A constant delight’ (Hi-Fi News)

Among the public meeting places of nineteenth-century Vienna, the dance hall held a prominent position. According to one’s social class or the time of year, the location might be an urban dance hall, a rural open-air gathering, or some grand society location. There the latest dance creations vied for attention with the old favourites. Of the dance styles that prevailed, those that enjoyed the greatest popularity during the period included the waltz, polka and galop.

Among the dance-musicians, none rivalled the various members of the Strauss family. Increasingly, their compositions have been perceived to rise above the normal limitations of the dance form, becoming at times miniature tone poems. From the dance halls of Vienna their music spread around the globe, creating a demand which they helped to satisfy with tours of their own. During the 1830s and 1840s, the elder Johann Strauss (1804-1849), the founder of the dynasty, made gruelling trips around Europe by coach. Later, tours by his three sons – Johann the younger (1825-1899), Josef (1827-1870) and Eduard (1835-1916) – helped to develop the family’s popularity still further.

The orchestra conducted by the elder Johann Strauss typically comprised some 25 performers, made up of strings, flute, oboe, two clarinets, bassoon, two trumpets, two horns and trombone. The younger Johann’s orchestra was somewhat larger, with a standard orchestration of double woodwind, four horns, two trumpets, and trombone. Their orchestrations normally involved a basic harmonisation from the strings, to which wind and brass instruments added colour. To meet the demands of other, smaller ensembles, the elder Johann’s dances were commonly published in reduced instrumentation that retained the harmonic structures of the original and added such colour as available wind instruments permitted. More recently, the Viennese musicologist Alexander Weinmann (1901-1987) made reductions in similar style, and it is a selection of such arrangements that The Gaudier Ensemble plays here.

The elder Johann Strauss began his career with his own orchestra in October 1825, a month after splitting from his friend and rival, Joseph Lanner. Before long his dance compositions became sufficiently popular to find their way into print. Galops form a significant part of his early output, since the style was one of the most popular of the 1820s and 1830s. They provided dancers with lively but – to avoid over-exhaustion – necessarily brief exertion. The Seufzer-Galopp (‘Sigh Galop’) was among a batch of Strauss’s dances published in December 1828, the sighs of the title being depicted in the falling notes of the fourth of the dance’s four eight-bar sections. Also in that same batch of dances was the frothy Chineser-Galopp (‘Chinese Galop’), whose brief melodic phrases and instrumental interplay do indeed combine to suggest a somewhat oriental sound. Likewise the Jugendfeuer-Galopp (‘Fire of Youth Galop’), which was first performed in August 1836 at a summer gathering at Vienna’s ‘Golden Pear’ inn, exudes the fire of youth in every bar.

It was at a summer gathering at the same venue that the Cachucha-Galopp was introduced in August 1837. The dance’s main theme had recently created a sensation in Vienna when danced by the celebrated dancer Fanny Elssler (1810-1884). She had made it her party piece after dancing it in the ballet Le Diable Boiteux in Paris in 1836. A note on the galop’s original orchestral score in the collection of the Gesellschaft der Musikfreunde in Vienna suggests that Strauss’s dance was composed an hour before the ball, written out by copyists, performed without rehearsal, and repeated three times in response to the applause it received. The Gitana-Galopp (‘Gipsy Galop’, 1839) is its direct companion, and once again it draws on existing Spanish themes. Those themes may be familiar from Angèle’s aria ‘Flamme vengeresse’ in Auber’s opera Le Domino Noir, and the process by which they came to be used by Strauss was seemingly somewhat tortuous. Apparently Auber used the themes originally for a pas de deux written for a revival of La Muette de Portici. They were then re-used in Le Domino Noir in 1837, and in a ballet La Gitana staged in St Petersburg for Marie Taglioni in 1838. This ballet was then staged in Vienna in April 1839, when Strauss composed his galop.

The earliest of the waltzes in the present collection is the Tivoli-Rutsch-Walzer (‘Tivoli Slide Waltz’), which Strauss introduced at a gathering at Vienna’s Tivoli pleasure gardens in the Upper Meidling suburb on 9 October 1830. Like the still-surviving pleasure gardens established in Copenhagen around the same time, the Viennese entertainment spot took its name from a pleasure resort outside Rome. That in Vienna opened in September 1830, with Strauss as one of its musical directors. On 4 October, a celebration of the Name Day of Emperor Franz attracted six thousand visitors. So many were excluded that a repeat celebration was arranged, and it was then that Strauss performed his new waltz. The title commemorates a slide that was one of the garden’s main attractions – not a slide that children (and, of course, some adults!) slide down on their backsides, but one down which couples rode on a kind of carriage mounted on a sledge. The sliding effect is clearly depicted a few bars from the end in the waltz’s coda.

It was in November 1839 that Vienna’s leading dance hall of the time, the Sperl, echoed to the sound of the elder Johann Strauss’s Wiener Gemüths-Walzer (‘Viennese Good-Nature Waltz’), a piece that was dedicated to the young Prince Nikolaus Esterházy (1817-1894). Another of Strauss’s waltzes, and possibly his best loved of all, is Loreley-Rheinklänge (‘Sounds of the Lorelei on the Rhine’). It includes a distinctive four-note phrase and echo for clarinet and horn in the introduction that preview further treatment in the main waltz. The composition was greeted with huge applause when first performed at a summer festivity in August 1843, attended by over 3400 people. It was a charity event in aid of Vienna’s St Joseph’s Children’s Hospital, held in lovely weather at another of Vienna’s summer entertainment spots – the Wasser- Glacis. This was situated in the former moat around the old Vienna city walls that survived until the late 1850s.

Down the ages, dance halls have periodically resounded to new dance styles, and during the 1840s they were gripped with polka fever. The elder Strauss’s Annen-Polka, which is not to be confused with the more familiar work of the same name by the younger Johann Strauss, was only his second dance in the style, but it would remain one of his most popular dances. It was introduced in August 1842 at a summer festival in the Volksgarten in honour of the Empress Maria Anna. The Salon-Polka was another that was introduced at the Volksgarten, but at a night-time festival for Strauss’s benefit in July 1844.

As for the curiously titled Eisele- und Beisele- Sprünge (‘Eisele and Beisele Leaps’), it celebrates a pair of newspaper cartoon characters, Baron Beisele and his steward Dr Eisele, who were introduced in early 1846 in the Munich comic paper Fliegende Blätter. The newspaper had the idea of sending the cartoon characters on a tour, and in November 1846 this took them to Vienna. The publicity and interest created were phenomenal, and the two characters might as well have been real-life celebrities. Their images were created in marzipan and porcelain, and theatrical burlesques and balls were put on in their honour. It was for one of the latter at the Odeon ballroom in Vienna in February 1847 that Strauss composed this jolly polka, whose bouncy phrases suggest the leaps of the title.

The Exeter-Polka, by contrast, was created in connection with a real-life journey of Johann Strauss himself to London from April to July 1849. This was his second visit to the British capital, following an earlier one for Queen Victoria’s coronation in 1838. One of the London venues at which he and his band played was the Exeter Hall, which stood in the Strand where the Strand Palace Hotel is today. It was for the first of his concerts there, on 14 May 1849, that Strauss composed the Exeter-Polka. Alas it was to prove one of the very last of all of his compositions. Shortly after his return to Vienna he contracted scarlet fever from one of his illegitimate children and died on 25 September at the age of only 45.

The Strauss family tradition was immediately taken over by his eldest son, who already headed his own orchestra. Indeed the younger Johann’s Scherz Polka (‘Joke Polka’) was first heard at the Sperl ballroom just a couple of months after the elder Johann’s death. The title refers not to any specific joke but to the general playfulness of the composition.

The younger Johann’s music was always more lyrical, more relaxed and more refined than that of his father, his style lacking the latter’s unquenched restlessness. This is particularly evident in the graceful Liebeslieder-Walzer (‘Love-Song Waltzes’), which were among the earliest of the younger Johann’s big successes. They were first performed at a summer concert in the Volksgarten in June 1852. Of the others, Thermen (‘Thermal Springs’) was composed for a ball of the medical students of the Vienna High School in January 1861. Finally, the southern warmth that radiates from Wo die Zitronen blühn (‘Where the Lemon Trees Blossom’) reflects the fact that Strauss wrote it for a concert tour of Italy in 1874. He first conducted it in Milan under the title Bella Italia (‘Beautiful Italy’). Its ultimate title comes from Mignon’s song from Goethe’s Wilhelm Meister – ‘Kennst du das Land, wo die Zitronen blühn?’.