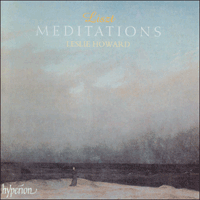 This is one of the more unusual volumes in Leslie Howard's survey of Liszt's solo piano music. The Responsories and Antiphons, S30, are settings of plainchant from the Liber Usualis to which Liszt has added simple harmonies. The works are listed in Grove as being choral, but they are hardly suitable for performance as such and Leslie Howard is of the view that various indications in the manuscript indicate that Liszt envisaged keyboard performance.

The resulting music is contemplative in mood and has an almost mesmerizing quality to it. To assist the listener we have printed all of the chants, with their Latin texts and translations, in the accompanying booklet.

‘A mood and an atmosphere of devotion … played with the appropriate restraint and dedication’ (Classic CD)
‘The detailed program book provides not only the texts and translations, but the original music of the plainchants as well’ (Fanfare, USA)

Liszt’s music for the church forms a most important strand in his work and, allied with his free compositions inspired by sacred themes, represents for many the finest aspects of Liszt both as man and musician. A brief scan of any Liszt catalogue reveals his oratorios, masses, Psalms, hymns, motets, chorales, and less easily classified items such as the Via Crucis and the present settings of chants from the Office, as well as the many further secular compositions upon sacred themes such as the Légendes, the Harmonies poétiques et religieuses, De profundis, many of the pieces in the Années de pèlerinage, and much of the organ music. In much of this music, Liszt makes use of plainchant.

The plainchant setting of the Office (as found, for example, in the Liber Usualis) is rarely heard today in liturgical context; even the monastic use of it is limited and most parish churches never use anything but the occasional section or conflation of sections from these services of the Hours, and then quite often spoken rather than chanted. These daily services in addition to the Mass – Matins, Lauds, Prime, Terce, Sext, None, Vespers and Compline – contain Psalms, hymns, lessons, Responsories (usually on texts of biblical origin), canticles, antiphons and prayers, which were either chanted or intoned. There are special services for all the important days in the church calendar, as well as a regular system of liturgies for every day of the year. Matins and Lauds are often combined, especially as an evening service before the day to which the Office belongs, and these combined Offices of the last three days of Holy Week – Maundy Thursday, Good Friday and Holy Saturday – are usually called Tenebrae. Liszt’s interest in this material was both religious and musical, and his personal library (preserved today in Budapest and tended by that doyenne of Liszt scholars, Dr Mária Eckhardt) contains several breviaries and other kindred tomes which he probably used for private meditation as well as in acts of corporate worship, especially during his years in Rome. They certainly contain all of his sources for the present work (as well as that for the Credo in his Missa coronationalis) and show that he was familiar with at least two varieties of plainchant notation, one the neumatic system familiar from the Liber Usualis and other current Office books, the other a system employing conventional secular notation, with the minim being employed as a standard note value. Liszt uses the semibreve as his basic unit in his harmonizations.

We have only slight specific documentary information about Liszt’s intentions with this work, which he wrote for Cardinal Hohenlohe in Rome, but, as with the Chorales he later produced for the same prelate, Liszt took some trouble to make a fair copy of the manuscript, and therefore accorded it some importance. The chants are accompanied for the most part in four, but occasionally in three, voices on two staves, and the text is generally reproduced in full. As with the Chorales, Liszt does not specify whether the work is choral or solo vocal, with or without keyboard accompaniment, or for keyboard alone. (The Chorales appear in Volume 8 of the present series.) It seems very likely that a keyboard instrument is essential, given the many places where Liszt has added fingering, and even that voices may be entirely optional. Writing, one presumes, about this work in a letter to the Princess zu Sayn-Wittgenstein on 24 July 1860 (Briefe V 19 pp34/5; no title is given in the letter and the manuscript lacks one), Liszt outlines his intention of restoring plainchant to popular Catholic worship, allowing only voices with possible reinforcement by the organ. But he also refers to an ad libitum organ part, which is certainly not to hand with the present work. In the old Liszt-Gesamtausgabe, the editor of the only edition of this work (which as far as can be currently ascertained, has never been performed nor employed liturgically), Dr Philipp Wolfrum, suggested that Liszt probably intended these harmonizations for practical church use, but it has long seemed to the present writer that they are equally suitable as private aids to devotion. The simplicity of the music and the fundamental universality of the chants mean that, divorced from any performance context, this music may be of real and possibly even therapeutic value to listeners of all kinds, whether of religious bent or not. The piano (and it might equally have been a simple organ or harmonium in Liszt’s mind) becomes merely a vehicle for the uncomplicated transmission of the music and calls no attention to itself.

As for Liszt’s treatment of the chants, one must remember that Liszt was in the vanguard of the revival of Gregorian chant and sought a harmonic language which would not get in the way of the simple expression of faith. So he is not concerned to invent a special modal harmony, as many later composers have done to great effect, nor is he interested in any contrapuntal fantasy. The piece remains simple and straightforwardly tonal, almost touchingly jejune from time to time, and harmonic word-painting only occurs at very special moments.

For the listener who wishes to identify completely with the liturgical context, a breviary is indispensable, but for the present purpose a précis of each Office follows, and the plainchants which Liszt used are given in full: music, words and translations. The usual structure of each Responsory is: Responsory/Verse/repeat of last section of Responsory. Some get rather more complex in their system of recapitulations, particularly the last Responsory of the Office for the Dead. Each new section (but not each partial reprise) is given a separate track number for ease of identification, and the symbols in the plainchant show readily enough where the reprises are.

Liszt deals only with the matutinal Responsories from the Christmas Offices. Matins begins with the Our Father, the Ave Maria and the Creed, and continues with versicles and responses and the invitatory appropriate to the festival. After Psalm 94 (Vulgate numbering is used throughout these notes) and the hymn Jesu, Redemptor omnium come the three Nocturns. The first contains Psalms 2, 18 and 44, each with antiphons, and three lessons from Isaiah (chapters 9, 40 and 52) each of which is followed by a Responsory (tracks 1 3 4). (In his settings of the Christmas Responsories, Liszt only harmonizes the central Verses with the doxology, ‘Gloria Patri’; elsewhere, he harmonizes the whole pieces.) The second Nocturn contains Psalms 47, 71 and 84, three lessons from Pope Saint Leo (Leo IX) and three more Responsories (6, 7, 8). The third Nocturn contains Psalms 88, 95 and 97, three lessons consisting of Christmas Verses from St Luke (Chapter 2) and St John (Chapter 1) with little homilies from Saints Gregory, Ambrose and Augustine, two further Responsories (10, 11) and the Te Deum.

For the Offices of the last three days of Holy Week, Liszt has again confined himself to the matutinal Responsories, with the Antiphon of the Benedictus from the Office of Lauds; so it is clear that he has the combined Tenebrae Office in mind. On Maundy Thursday the first Nocturn contains Psalms 68 to 70 and three lessons from Jeremiah (Chapter 1) each followed by a Responsory (13, 15, 17). The second Nocturn contains Psalms 71 to 73, lessons from St Augustine on a text from Psalm 54, and three further Responsories (20, 22, 24). The third Nocturn has Psalms 74 to 76, lessons from I Corinthians (Chapter 2) and three more Responsories (27, 29, 31). Lauds continues with Psalms 50, 89, 35, the Canticle of Moses (Exodus, Chapter 15) and Psalm 146. Then comes the Antiphon of the Benedictus Traditor autem (34), which precedes and follows the Canticle of Zachary (from St Luke Chapter 1), and the Office concludes with prayers, a silent Our Father and a low, subdued spoken Miserere. This service is accompanied by the extinguishing one by one of all of the church lights and candles.

On Holy Saturday, the matutinal Psalms are 14, 15; 23, 26, 29; 53, 75, 87; the lessons are from Jeremiah Chapters 3 to 5, St Augustine on a text from Psalm 63, and Hebrews Chapter 9, each lesson followed by a Responsory (1 3 5 7 9 11 13, 15, 17). At Lauds, the Psalms are 50, 91 and 63, then the Canticle of Ezechias (Isaiah Chapter 38) and Psalm 150. The Antiphon to the Benedictus Mulieres (19) encloses the Canticle of Zachary (here as elsewhere Liszt does not set the doxological ‘Euouae’ – the vowels from ‘seculorum Amen’). Christus factus est is sung before the Office closes as upon the two previous evenings. In the second Responsory (3) Liszt omitted to include the phrase ‘per diem et noctem’ in his manuscript. He noted the error, but does not seem to have provided an inserted harmonization of the missing phrase. It is supplied here by the present writer.

The Office for the Dead