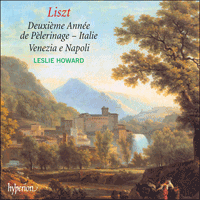 This, the forty-third volume (and sixty-fifth disc) in Leslie Howard's Liszt encyclopaedia, includes the Second Book of the composer's Années de Pèlerinage, a work which derives its considerable inspiration from the art and literature of Italy. Here we find the final versions of the three Petrarch Sonnets and the famous Dante Sonata.

Alongside these works we have Venezia e Napoli, an ingenious set of encore pieces, and the intriguing coda to Au bord d'une source (from the Swiss volume of the Années) which Liszt penned for the young Italian composer/pianist Giovanni Sgambati in 1863.

‘A familiar enough masterpiece yet typically spiced by Howard with some fascinating side-steps and discoveries’ (Gramophone)
‘This disc is studded with pleasures, even (especially in the Petrarch sonnets) with flashes of ecstasy. Fine sound too’ (Fanfare, USA)

There are many similarities in the genesis of the first and second books of Liszt’s Années de Pèlerinage: most of the pieces in both books were conceived in the 1830s during his travels to and from Switzerland and Italy with Marie d’Agoult, a time which saw the birthof the couple’s three children, Blandine, Cosima and Daniel, and for Liszt a period of intense compositional activity, punctuated by a good many concerts. The two books were eventually prepared for publication in their final form by the early 1850s, in Liszt’s busiest period as a composer/conductor at the court of Weimar. Their story is also paralleled by that of the Transcendental Etudes and the Hungarian Rhapsodies, which achieved their final form at about the same time. In the case of the Swiss volume, Liszt had selected all but one of the pieces from the previously published Album d’un Voyageur; with the Italian set only three of the pieces had appeared in print in earlier versions—the Petrarch Sonnets—although all but one of the remaining pieces had been drafted in the late 1830s. The supplementary volume Venezia e Napoli had been ready for publication in about 1840, but was withdrawn by Liszt at the proof stage. The later set of pieces with the same title discarded two of the earlier set, revised two, and added a new piece between them. The important difference between the two books lies in the source of inspiration: although various literary references lie in the background to the Swiss volume, the principal imaginative spring is the landscape of Switzerland itself; the second Année draws entirely upon Italian art and literature.

Sposalizio was first written in 1838 or 1839, and the manuscript shows at least two levels of revision before the version finally published. (The only complete and performable earlier version will appear in Volume 48 of this series, along with the earlier versions of the Dante Sonata.) Liszt composed the work in homage to Raphael’s eponymous painting of the betrothal of Our Lady and St Joseph (which may be seen in the Brera Chapel in Milan). We know from Liszt’s later use of the second theme (G major, Lento) in the work for voices and organ called Zur Trauung (‘At the betrothal’) and otherwise catalogued as Ave Maria III that this melody honours Mary, but Liszt offers no further clues to the musical characterization. The uncanny presentiment in the closing phrases of Debussy’s First Arabesque has often been noted.

Michelangelo’s sculpture Il penseroso may be seen on the tomb of Lorenzo de’ Medici in the church of San Lorenzo in Florence. The music is amongst the simplest and most stark of Liszt’s early mature works, and appears to have been incorporated as it was originally written in 1838/9. The work was later revised and extended to form the second of the Trois Odes funèbres: ‘La notte’ (in Volume 3), and both works bear Michelangelo’s quatrain:

Sleep, nay, being made of rock,
makes me happy whilst harm and shame endure.
It is a great adventure neither to see nor to hear.
However, disturb me not, pray—lower your voice!

Of course, Salvator Rosa (1615–1673) was primarily a painter, but he was also an actor, a poet, a satirist and a musician. Nonetheless, the saucy little Canzonetta del Salvator Rosa is not his music, although the text may be by or about him. The work (originally for voice and basso continuo) is listed in The New Grove amongst the cantatas for solo voice of the once greatly celebrated Giovanni Battista Bononcini (1670–1747)—under the title of its opening line ‘Vado ben spesso’, and unaccountably described as unpublished. Liszt’s version, undated, but at any rate completed by 1849, ranks as one of his lightest and happiest numbers, and exemplifies a catholicity of taste which does not differentiate between wholly original music and music based upon existing source material. The original text is laid out above the music:

I very often go about to various places,
but I never know how to vary my desire.
My fire shall always remain unchanged,
and so (therefore) shall I.

In adapting the Tre Sonetti di Petrarca for their final piano versions Liszt changed the order from the first publication, reversing the first two, so that Sonetto 47 happily takes up the chord with which the Canzonetta finished. The long introduction to Sonetto 104 is replaced with a passage almost identical to that in the first published vocal setting. The three pieces are intense love-songs rich in passionate harmonies, and generous in their melodic flight, and they have long been amongst Liszt’s most beloved works. As was remarked in the notes to the earlier versions (in Volume 21), the sense of the poetry remains crucial to the understanding of the music, so Petrarch’s original sonnets are given here, with translations.

Just as there is inconsistency between the title page and music head titles of the sonnets—in one place ‘di’ and the other ‘del’ Petrarca—the work commonly called the ‘Dante Sonata’ is described both as ‘une lecture de’ on the title page and ‘une lecture du’ at the head of the music and in the amended title on the manuscript. The original title of the piece was Paralipomènes à la Divina Commedia—Fantaisie symphonique pour piano, and the first version (which is in two parts) is probably what Liszt first played in 1839. A first layer of revision in the principal manuscript may well belong to the second projected title Prolégomènes (still in two parts), and Liszt seems to have performed a version of this work under the title Fantasia quasi sonata (Prolégomènes zu Dantes Göttlicher Comödie). A further, much more extensive layer of revision carries the final title and one-movement structure, but a good many final corrections and alterations were made at the proof stage to produce the present work.

The principal manuscript with its revisions in Liszt’s hand is actually in a copyist’s hand and contains several errors which went uncorrected by Liszt through the various stages of revision. Problem bars include: 65 (first left-hand group may be incorrect—the second left-hand chord should perhaps have a B flat instead of an A); 102 (second harmony should surely have E sharp—MS has a (redundant) natural sign); 255 (first left-hand chord should probably have an F sharp instead of an E); 262–3 (almost certainly B flats and hence E flat major—otherwise the augmented triad is the only such chord in the work in all versions, and it is a chord to which Liszt normally grants particular importance in a musical structure—furthermore, this theme is always extended elsewhere by common triads); and 297 (the right hand should certainly have G sharps on the third crotchet, as in the earlier version—the lack of them in the rewriting, which otherwise preserves exactly the same progression, is clearly a slip of the pen). (All but the first of these problem passages are rendered according to these observations in the present performance.)

Many commentators have essayed a description of the particular reading of Dante which Liszt has chosen to represent, although he himself gave no specific clues. (The case of the Dante Symphony is quite another matter: each movement represents Liszt’s reaction to Inferno and Purgatorio, with a hint of Paradiso in the concluding Magnificat, and the musical text is laid out upon occasion to fit various quotations of Dante’s work.) Clearly, the diabolus in musica tritone—heard at the outset, and at all the important structural junctions—suggests Inferno, and suggestions have been made concerning the Francesca da Rimini episode. But calling the reprise of what amounts to the second subject (10 bars of ethereal tremolo at bar 290) a representation of Paradiso as some commentators have done is surely wide of the mark, and the piece as a whole is much less celestial or purgatorial than it is relentlessly infernal. Formally, the structure is a much tighter sonata-form than the epithet Fantasia might suggest, and the musical form outweighs any attempt there might have been to convey a poetic narrative rather than just a general reaction to Dante’s work.

Venezia e Napoli is usually waved away as a rather insignificant group of encore pieces, but while they are obviously lighter fare, they merit high praise for their sheer beauty and ingenuity. Each piece is based on what was familiar material in the streets of Italy at the time of their conception.

Gondoliera is described by Liszt in the score as La biondina in gondoletta—Canzone di Cavaliere Peruchini (Beethoven’s setting of it, WoO157/12, for voice and piano trio just describes it as a Venetian folk-song, and Peruchini remains elusive) and he treats it in a much gentler way than in the earlier version (see Volume 21) with a particularly fine verse with tremolo accompaniment; the tremolo guides a very dark musing upon Rossini’s Canzone del Gondoliere—‘Nessùn maggior dolore’ (Otello) which itself recalls Dante’s Inferno (‘There is no greater sorrow than to remember past happiness in time of misery’); and the Tarantella—incorporating themes by Guillaume Louis Cottrau (1797–1847)—emerges from the depths, much more subtle than in its previous, primary-coloured garb (again, see Volume 21), but ultimately triumphantly boisterous.

As a little extra, a Swiss piece with an Italian dimension: whilst staying at the Madonna del Rosario in Rome in the early 1860s, Liszt came to know and to be a mentor to the young Italian composer-pianist Giovanni Sgambati (1841–1914). In December 1863 Liszt sent a touching little note to Sgambati with nine bars of music to be attached ‘pour terminer notre rêverie Au bord d’une source’ in a forthcoming Sgambati performance. Although not intended for every performance of the piece, the little coda is charming and deserves an occasional hearing.