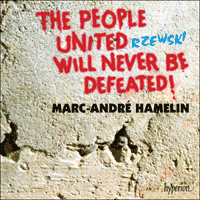 The People United Will Never Be Defeated!

To the uninitiated it is hard to describe the musical world of the American composer Frederic Rzewski. A pianist himself, Rzewski initially made a name for himself as a champion of the avant-garde, performing everything from Cage to Boulez. In the '70s his own music took a much more populist turn as his political beliefs drove him to find a much more approachable language, basically tonal and incorporating much quotation from popular music. It is music of this period that is recorded here.

The People United Will Never Be Defeated! 36 Variations on a Chilean protest song, has been likened to a twentieth-century 'Diabelli' Variations. This lengthy work is a tour de force of compositional and keyboard virtuosity, exhilarating and emotionally all-encompassing in its effect. Marc-André Hamelin has been playing the work for many years and has become one of its greatest champions, though the fact that many other pianists have also taken it up confirms that the piece is becoming a twentieth-century classic. Similiar in idiom are the two North American Ballads that complete the recital; once again popular melodies are woven into a fabric which in Winnsboro Cotton Mill Blues includes the stunning representation of the mechanical noise of the mill.

‘Never likely to be equalled, let alone surpassed … I would urge all readers to hear this extraordinary recording’ (Gramophone)
‘My new piano CD of the week—possibly of the year—has to be Marc-André Hamelin's extraordinary traversal of the 36 variations on a Chilean song’ (The Independent)
‘Hamelin is more than a match for this music; his art lifts it off the page and releases its intense communicative power’ (Hi-Fi News)
‘A truly riveting piece of contemporary piano music’ (The Evening Standard)
‘Canadian super-virtuoso Marc-André Hamelin has done it again, giving another rarely heard masterpiece of piano repertoire the public attention it deserves’ (Billboard)
‘Not to be missed on any account’ (Musical Opinion)
«Virtuose et artiste accompli, Marc-André Hamelin les laisse se chamailler avec une superbe et une énergie aussi aristocratiques qu'endiablées» (Le Devoir)

It is all too easy to bracket the virtuoso pianist/composer tradition with Mozart at the start, Rachmaninov at the end, and everything in between with Liszt. Part of this reasoning lies in the fact that the piano itself does not play as central a role to the work of twentieth-century composers as it did in the Romantic era. Stravinsky, for instance, composed at the keyboard, yet his piano output is marginal compared to his ground-breaking orchestral works. On the other hand, many landmarks of twentieth-century piano music were concocted by composers who could get around the piano with skill, yet laid no claim to being performing pianists: Maurice Ravel, Pierre Boulez, Elliott Carter, George Crumb, to name but a few.

The pianist/composer tradition, however, is not only alive and well at the end of the twentieth century but thriving through the hands and pen of Frederic Rzewski (pronounced ZHEV-skee). A dominant figure on the international new-music scene since the early 1960s, Rzewski’s career and prolific body of work defy easy categorization. As an undergraduate at Harvard, Rzewski became acquainted (through fellow classmate and composer Christian Wolff) with John Cage and David Tudor, whose experimental proclivities proved a decisive influence. Just as Cage provided live music for dancers early in his career, two noted dance teachers—the late Viola Farber and Bessie Schoenberg—spoke to this writer of Rzewski accompanying dance classes around that time, recalling his fingers flying all over the keyboard, and playing too many notes!

A Fulbright Fellowship brought Rzewski to Italy from 1960 to 1962, where he studied with Luigi Dallapiccola. Rzewski met flautist Severino Gazzelloni, with whom he played concerts and made recordings. Rzewski’s reputation as a new-music pianist and avant-garde experimentalist grew. He recorded music of Stockhausen and Boulez, and championed the latter’s formidable first and second sonatas. Together with composers Alvin Curran and Richard Teitelbaum, Rzewski founded the MEV (Musica Elettronica Viva) group in Rome during the mid-sixties. The group quickly became renowned for fusing live electronics and improvisation in theatrical settings, and provided a forum in which classical and jazz avant-gardists could work together. While Rzewski himself does not play jazz, his improvising ingenuity led to successful collaborations with experimental jazz soloists/composers like Anthony Braxton and Steve Lacy.

The elements of improvisation and theatre characterizing MEV’s work spilled over into Rzewski’s steadily growing compositional output from the late sixties and early seventies. His 1968 Les Moutons de Panurge, for instance, deals with additive melodic formulas. Other works reveal a churning, virtuosic brand of what would later emerge as minimalism. These include Jefferson—Rzewski’s 1970 setting with soprano and piano of the Declaration of Independence’s opening statement. Coming Together, from 1972, pits an ensemble of low instruments against a speaker intoning a letter written by an inmate in New York’s Attica Prison, the scene of a controversial 1971 uprising. More significantly, Rzewski’s employment of texts of political and social import helped direct his compositional identity. Another crucial contact was the British composer Cornelius Cardew, who was writing pieces in a tonal idiom that allowed him to communicate radical political ideas. In an interview with this writer, Rzewski also cited his youthful inspiration of American popular music via the radio: from soup and soda jingles to socially conscious performers like Paul Robeson and Pete Seeger.

All these influences, plus a great deal more, come into focus through the works Marc-André Hamelin has selected for this recital. Arguably Rzewski’s best-known piano opus, The People United Will Never Be Defeated! is a set of thirty-six variations based on the Chilean song ¡El Pueblo Unido Jamás Será Vencido! and stands as a watershed achievement during the time from 1971 to 1976 when Rzewski was living in New York, a period when the composer became more and more concerned with the question of language. ‘It seemed to me’, Rzewski wrote in a programme autobiography, ‘there was no reason why the most difficult and complex formal structures could not be expressed in a form which could be understood by a wide variety of listeners. I was also concerned with what appeared to me to be a crisis in theory, not only in music but in many different fields, including science and politics: the absence of a general theory to explain phenomena and guide behavior. I explored form in which existing musical languages could be brought together.’

The song on which the variations are based was written by Sergio Ortega, a Chilean composer whose work was part of the cultural movement inspired by the formation of the Unidad Popular in 1969, together with the left coalition under Salvadore Allende’s leadership. Its music represented a fusion of classical forms with popular melodies, or, conversely, employed traditional folk instruments in classically orientated contexts. Three months before Augusto Pinochet’s military coup, Ortega heard a street singer in front of the Palace of Finance in Santiago shouting ‘¡El pueblo unido jamás será vencido!’, a well-known Chilean chant for social change. The chant stuck in Ortega’s mind. A few days later he sat at his piano, and the tune emerged in a flash. The song was performed in public two days later by the group Quilapayun and quickly became an anthem for the Chilean Resistance.

Similarly, Rzewski’s variations were written at white heat during September and October of 1975, in response to a commission from pianist Ursula Oppens for a work to complement Beethoven’s ‘Diabelli’ Variations in a recital at the Kennedy Center. Little in Rzewski’s creative output up until that time hints at the determined eclecticism, breadth of scale, and unbridled, passionate virtuosity infusing every bar of this ambitious piece. At the same time, the work is specifically, even rigorously structured. The theme, for instance, contains thirty-six measures (bars), followed by thirty-six variations. There is a modulation pattern which takes the D minor theme and transposes it up a fifth with each subsequent variation, thereby covering all twelve minor keys. The variations are partitioned into groups of six, described by the composer thus:

Six cycles, each of which consists of six stages, in which different musical relationships appear in order: 1. simple events; 2. rhythms; 3. melodies; 4. counterpoints; 5. harmonies; 6. combinations of all these. Each ‘cycle’ embodies a distinct, albeit flexible character or emotional quality linked to its corresponding ‘stage’. Thus the first six variations serve as a kind of exposition, for which the theme is displaced, inverted, paraphrased, and distilled across the keyboard’s entire range. A wide variety of dynamic, pedalling and articulation indications come into play. In Variation 5 the composer requests a mode of attack for which one plays chords staccato, then catches the harmonic overtones with the pedal. Rhythmic challenges dominate cycle 2, from the caustic grace-note-like triplets in Variation 7 to Variation 10’s pointillistic out­bursts. The third cycle (Variations 13 to 18), is governed by a lyrical, folk-like modality, while the fourth’s angular rhythms and bravura passagework (Variations 19 to 24) chart darker, virtuosic waters. Cycle 5’s variations are the freest in form, encompassing the quiet, aching chordal essay of Variation 25, Variation 26’s iron-clad march rhythms and the haunting Variation 27—an extended minimalist foray that commences with meditation and ends with mania. The final six variations summarize all that has come before, like familiar images being conjured up out of nowhere, only to disintegrate into the maelstrom of ideas pulling and tugging at each other. After the sixth cycle, the pianist has the option of improvising a cadenza. Mr Hamelin takes Rzewski up on his offer, unleashing a brilliant flurry of extemporized music before settling into the theme’s triumphal recapitulation.

In addition to the theme, two other songs of political import interweave throughout the variations. One is the Italian revolutionary song Bandiera Rossa, which refers to the Italian people who, in the 1970s, provided refuge for victims of Chilean fascism, and the second is Hanns Eisler’s 1932 anti-Fascist Solidaritätslied which also figures in Marc-Andre Hamelin’s cadenza.

The late Paul Jacobs was an outstanding and often outspoken champion for the music of his day. From 1975 until his untimely death from AIDS in 1983 he made a series of highly regarded solo recordings, including an album of works recognizably American by their forms and themes. Jacobs commissioned Rzewski’s four North American Ballads (1979) for this project. ‘In writing these pieces’, wrote Rzewski in his programme notes, ‘I took as a model the chorale preludes of Bach, who in his contrapuntal writing consistently derives motivic configurations from the basic tune. In each piece I built up contrapuntal textures in a similar way, using classical techniques like augmentation, diminution, transposition, and compression, always keeping the profile of the tune on some level.’

Down by the Riverside is a case in point. Based on the spiritual of the same name, which was frequently sung in the heyday of the peace movement during the height of the Vietnam war, the theme is treated in a disarming (all puns intended) manner before reappearing in more elaborate guises. According to Rzewski, Winnsboro Cotton Mill Blues dates from the 1930s, but is of unknown origin. Its text reflects the exploitive working conditions in the textile mills of North Carolina. The rapid bass register clusters which open the work mirror the relentless hammering noise made by rivets in a textile machine to frightening effect. Soft, but no less intense blues-tinged episodes provide the only respite in this chillingly effective sound portrait. More than anything, Frederic Rzewski’s piano music from the seventies cogently demonstrates that one could be a radical in the grand manner, that innovation and accessibility were plausible bedfellows.