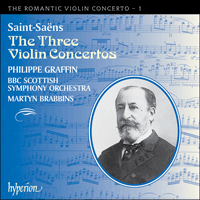 These sparkling performances of Saint-Saëns' violin concertos are a fitting start to Hyperion's new series of Romantic Violin Concertos; a follow on from the highly successful Romantic Piano Concerto series.

Though more conventional, the violin writing for the Concerto in A Major is ever-inventive, especially in the witty second episode where the hen from Le Carnaval des Animaux makes a premature entrance. This was the first of several works he composed for the great Spanish violinist Pablo de Sarasate; in 1859 just fifteen years old but already a famous virtuoso. Saint-Saëns' instantly memorable melodies are a feature of all his best-known works, and there are tunes in abundance in the well-known B Minor Concerto. The intense B minor mood probably offered inspiration for the violin concertos of Elgar and Bartók.

‘Hyperion holds a trump card in Philippe Graffin, whose elegant, emotionally charged playing is strongly reminiscent of the young Menuhin (he has a similar sort of sound) and whose understanding of the idiom seems to me second to none – certainly among modern players’ (Gramophone)
‘Philippe Graffin is fully equal to [the] formidable technical demands, and also strikes an essential spark illuminating the music’s character and passionate stimulus’ (The Daily Telegraph)
‘The delightful surprise here is the Second Concerto, full of youthful exuberance. Philippe Graffin, with rich, firm tone, gives performances full of temperament, warmly supported by Martyn Brabbins and the BBC Scottish’ (The Guardian)
‘All are beautifully crafted, irresistibly violinistic and catchily tuneful. Graffin is a real stylist, a player in the Franco-Belgian tradition with exquisitely sweet and focused tone and enviable bravura in the technical high jinks Saint-Saëns demands of his soloist. A delectable issue’ (The Sunday Times)
‘Stylish performances and excellent sound’ (Classic FM Magazine)
‘Graffin clearly believes in these works, delivering exhilarating and passionate interpretations throughout … an outstanding disc in every way’ (Classic CD)
‘The French virtuoso Philippe Graffin is a sensitive and intelligent soloist, wonderfully attuned to Saint-Saëns’ conservative but always tasteful subtleties’ (The Scotsman)
‘There are few more exciting young fiddlers around at the moment than Frenchman Philippe Graffin. Three previous Hyperion releases of music by Ysaÿe and Chausson have already revealed Graffin’s abundant gifts, and in this generous new Saint-Saëns coupling … one can once again only marvel at playing of such thrilling temperament, consummate intelligence and stylistic flair’ (Hi-Fi News)
‘The brilliant French violinist Philippe Graffin … demonstrates his skill on this new Hyperion recording’ (The Evening Standard)
‘Flawless performances’ (Classical Ireland)
‘The young French violinist, Philippe Graffin, performs with great élan and virtuosity’ (Contemporary Review)
‘An auspicious beginning for this new Hyperion series’ (Classical Express)

Berlioz’s well-known witticism concerning the young Saint-Saëns—‘Il sait tout, mais il manque d’inexpérience’ (‘He knows everything, but lacks inexperience’)—conveys genuine admiration whilst suggesting a want of the sort of youthful extravagance that can lead to great achievement. Saint-Saëns himself described a similar aspect of his musical character, in contrast with his friend Bizet: ‘He sought passion and life above all things, whereas I ran after the chimera of purity, of style and perfection of form’. This goes some way towards explaining how such an inventive and productive composer, friend of Liszt and one of the earliest to understand the import of Wagner, could remain so traditional in many aspects of his music. In his concertos, however, the clarity and balance he sought for is allied to a sensitive and often innovatory approach to the concerto form, and to a strong feeling for idiomatic solo writing—just as accomplished when writing for violin or cello as for his own instrument, the piano. And, even if form were a primary considera­tion, he did not neglect passion and life.

The earliest of the three violin concertos is the C major which, though composed in 1858, was only published as No 2 in 1879. Marsick gave its successful first performance the following year at the Pasdeloup concerts in Paris. It’s not known for what occasion it was originally composed; Saint-Saëns already knew several notable violinists, among them the Belgian François Seghers, founder of the Société Sainte-Cécile, who had introduced him to Liszt, and George Bridgetower, the Afro-English violinist for whom Beethoven had written his ‘Kreutzer’ Sonata. By 1858 Saint-Saëns had already become a highly accomplished composer, with three symphonies, a mass, numerous songs, cantatas and instrumental works to his credit. As with all his subsequent concertos, there is no traditional extended orchestral introduction; instead, he follows the example of Mendelssohn’s Violin Concerto in setting up an accompanimental figure over which the soloist enters with the main theme. In the classical manner, this is based around the notes of the C major chord but with a declamatory, extravagant character that immediately establishes the soloist as a romantic protagonist. The theme has a contrasting, more lyrical continuation, after which, again following Mendelssohn’s model, the orchestra takes up the opening melody in an extended tutti passage that also introduces two important subsidiary ideas. When the violin re-enters, the music moves to E major for the second subject. This turns out to be based on the lyrical continuation to the first theme. In a typically subtle piece of thematic organisation, Saint-Saëns refers, during the continuation of this melody, back to the concerto’s opening bars. Throughout the movement, indeed, he develops his ideas with remarkable resourcefulness, rarely repeating anything exactly. The cadenza arrives in the expected, conventional way, towards the end of the movement. Following Mendelssohn again, Saint-Saëns writes out his own cadenza and, in a most original touch, gradually re-introduces the full orchestra, beginning with the timpani, during its concluding passage, based on a long, sustained G.

For the A minor Andante, Saint-Saëns adds a harp and three trombones to the orchestra, the harp providing a bardic accompaniment to the violin’s melancholy melodies, the trombones together with bassoons adding a sombre, antique-sounding counterpoint to the opening motif. There’s a dramatic middle section in the major, culminating in a grandiose fanfare. During the latter part of the movement the woodwind voices emerge increasingly as alternatives to the violin. In the course of an extended coda, the music builds to a climax over a pedal bass, just as in the first movement’s cadenza, after which there’s an unexpected turn to a luminous A major before a return to the sombre mood and sound of the opening. Then the oboe, quite suddenly, takes us without a break into the lively rondo finale. Though this is more conventional music, the ever-inventive violin writing gives a sparkling impression, especially in the witty second episode where the hen from Le Carnaval des Animaux makes a premature entrance.

If the C major Concerto shows Saint-Saëns handling resourcefully a traditional form, in the A major work of the following year his inventiveness extends to the actual formal outlines—a single Allegro movement enclosing an Andante middle section. It was the first of several works he composed for the great Spanish violinist Pablo de Sarasate, in 1859 just fifteen years old but already a famous virtuoso. It’s tempting to see the Concerto as a portrait of the young maestro—impulsive and mercurial at the start and then, at the next solo entry, graceful and elegant. (We can hear these qualities in the recordings Sarasate made in 1904.) The soloist’s opening gesture, with its chordal motif followed by a rhythmic figure, is rarely absent for long, and gives rise to a large variety of different continuations. The Andante interlude has the simplest design—an extended violin melody framed by an introduction and postlude incorporating a tentative woodwind figure accompanied by violin trills. The organization of the Allegro is much more complex and dynamic, especially the way the material is re-ordered and re-composed after the Andante.

Sarasate was also the dedicatee of Saint-Saëns’ next and final violin concerto, written in 1880. In the twenty years that had elapsed since the A major Concerto he had produced four further concertos (Nos 2, 3 and 4 for piano, No 1 for cello). He had discovered, too, the ability to write instantly memorable melodies that is a feature of all his best-known music, and developed a colourful, romantic harmonic style, with modal inflections that cloud the tonality, and often substitutes more remote chords and keys for the ones we expect. When, in the first movement, he brings in the sensuously lyrical second subject, not in the key of G major which he has seemed to prepare, but in the more remote E major, we feel transported to a magical world far removed from the passionate directness of the concerto’s opening pages. This intense B minor mood, which surely offered inspiration for the violin concertos of Elgar and Bartók (No 2), is put into even sharper relief by the gentle barcarolle that forms the second movement, set in the extremely remote key of B flat major, with no attempt to effect a tonal transition. As in the C major Concerto’s Andante, Saint-Saëns delights in relating the solo violin to the contrasting individual voices of the woodwind, establishing an intimate chamber-musical atmosphere. The arpeggio passage near the close where the violin, playing harmonics (Sarasate was particularly fond of them), is joined by the clarinet, creates a strikingly original effect.

The finale begins with another abrupt key-switch, not straight back to B minor but to its close relative, E minor. Like Mendelssohn in his violin concerto, Saint-Saëns prefaces his last movement with an introduction—not meditative as in the earlier work, but a boldly dramatic dialogue in the style of a recitative. The main part of the finale has a bright, march-like character, and far from being the conventional lightweight concerto finale, it’s the most extended, complex movement of the three. There’s a wealth of memorable themes—a passionate subsidiary motif, a broad second subject, and a chorale which appears as quiet contrast but returns near the end in triumphal style to set the scene for a brilliant conclusion. One of the most impressive features of this concerto is the way Saint-Saëns integrates the element of virtuosity. No longer is the music divided neatly into cantabile or brilliant passages; instead, the virtuoso character can appear at any time, to add drama, excitement, or a decorative quality to the music. Certainly, Saint-Saëns ‘knows everything’. In this vivid, spirited work he shows more than technical wizardry. He knows how to enthrall and move us.