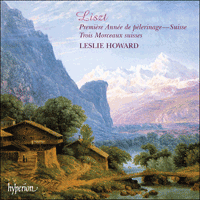 Liszt's Années de pèlerinage, première année—Suisse ('Years of Travel, First Year—Switzerland') stands as one of the most important productions from his Weimar years—the years of his real coming of age as a composer of international stature—and begins, appropriately, with homage to Switzerland's most famous legend: Chapelle de Guillaume Tell ('William Tell's chapel').

Although not explicitly specified as such by Liszt, the Trois Morceaux suisses are in effect a supplement to the Première année (along the lines of the supplement Liszt specifies for the Italian collection). The three works are arrangements of themes by other composers who have endeavoured to capture the atmosphere of the Swiss herdsman's song.

‘In Trois Morceaux Suisses, which he likens in his scholarly and informative notes to a garland of encores, he powers and swashbuckles his way through a wild assortment of exuberant obstacles’ (Gramophone)
‘Warmly recommended’ (Fanfare, USA)

As with the Hungarian Rhapsodies and the ‘Transcendental’ and ‘Paganini’ Études, the music of the first and second Années de pèlerinage was the product of careful reworking, during Liszt’s Weimar years, of music which he originally composed during his time as a travelling concert artist. With the exceptions of Orage and Eglogue, all of the music in this programme derives from pieces in the Album d’un voyageur (see Volume 20 of this series), with alterations great and small. The original collection, which Liszt later tried to suppress, runs for just short of two hours and was never likely to have been performed as a programme in itself. It contains three books: Impressions et poésies, Fleurs mélodiques des Alpes and Paraphrases. For the first instalment of the new collection of Années de pèlerinage (this title had also appeared in one of the early printings of part of the Album d’un voyageur) Liszt selected five pieces from the first book, two from the second, a theme from his Fantaisie romantique (also in Volume 20) and added two further works in an entirely rearranged programme. The dating of the set as a whole is complicated: Eglogue was written in 1836 but was not utilized in the earlier collection; Orage was newly written in 1855. The pieces taken over from the Album date from 1835/6, and their revisions were made between 1848 and 1854. The whole new volume appeared in 1855.

Liszt’s Années de pèlerinage—Première année—Suisse (‘Years of Travel—First Year—Switzerland’) stands as one of the most important productions from his Weimar years—the years of his real coming of age as a composer of international stature. It begins, appropriately, with homage to Switzerland’s most famous legend: Chapelle de Guillaume Tell (‘William Tell’s chapel’) is a reworking of the similarly named piece in the Album, but is altogether starker in texture. The original page of introduction is replaced with three striking bars of expanding chords, which also furnish the material for the completely recomposed coda. The middle section is also entirely new, and evokes the sound of the alpenhorn, but the principal thematic material is happily retained, as is the knightly motto at the head of the score: ‘Einer für Alle—Alle für Einen’ (‘One for all, all for one’).

… thy contrasted lake,
With the wild world I dwelt in, is a thing
Which warns me, with its stillness, to forsake
Earth’s troubled waters for a purer spring.

This delicate little piece is taken over almost unaltered from the earlier version.

Pastorale is a rethinking of the third of the Fleurs mélodiques des Alpes. The central episode is removed, and the springing bass of the main theme is new, whereas the boisterous leaps which originally accompanied the second theme have been much chastened. The tonality has also changed from G major to E major.

‘In säuselnder Kühle / Beginnen die Spiele / Der jungen Natur’ (‘In the whispering coolness begins young nature’s play’) writes Schiller in his poem Der Flüchtling (‘The Fugitive’), which passage is quoted by Liszt at the head of Au bord d’une source (‘By a spring’). In the earlier version, the technical hurdles almost detract from the simplicity of the intended depiction of freshly springing waters; Liszt’s new arrangement of the material, at once more subtle and presenting technical problems more charming than intractable, has rightly made this version one of his best loved works.

But where of ye, O tempests! is the goal?
Are ye like those within the human breast?
Or do ye find, at length, like eagles, some high nest?

Several commentators have rightly remarked the similarity of the defiant opening to that of the early Malédiction concerto for piano and strings. Although Liszt invented memorable musical representations of many a storm—and there are several examples in the present programme—he was never so relentless and single-minded in his work as in this fine piece, almost a study, in the best sense, and unequalled in its balanced account of grandeur and fury.

Vallée d’Obermann (‘Obermann’s Valley’) is another of Liszt’s finest works, and Liszt himself excused its inclusion in a collection of Swiss impressions by pointing out that the French novel (Senancour’s Obermann) which inspired it was set in Switzerland. The many changes between the two versions of the work (which Liszt also arranged for piano trio in his last years, adding the title Tristia to the final version) are too numerous to detail here: much of the material is similar, if the order of the form is different, but here the added rhetorical gestures pace the work better. The original two-page preface from Senancour is reduced to a dozen lines—‘Que veux-je? Que suis-je? Que demander à la nature? …’ (‘What do I want? What am I? What to ask of nature? …’), and a further nine lines from Childe Harold introduce this powerful piece:

Could I embody and unbosom now
That which is most within me,—could I wreak
My thoughts upon expression, and thus throw
Soul, heart, mind, passions, feelings, strong or weak,
All that I would have sought, and all I seek,
Bear, know, feel, and yet breathe—into one word,
And that one word were Lightning, I would speak;
But as it is, I live and die unheard,
With a most voiceless thought, sheathing it as a sword.

If the flattery of imitation were anything to go by, then Tchaikovsky certainly admired Vallée d’Obermann sufficiently when he appropriated its main theme for Lensky’s aria in Yevgeny Onegin.

Significantly, the very next stanza of Childe Harold introduces Eglogue:

The morn is up again, the dewy morn,
With breath all incense, and with cheek all bloom,
Laughing the clouds away with playful scorn,
And living as if the earth contain’d no tomb,— …

A more fresh-faced piece of Liszt would be hard to imagine, and its delicate simplicity makes a perfect foil for the previous piece. (Tchaikovsky echoes this work in his well-known Troïka, Opus 37bis/11.)

Le mal du pays (Heimweh) (‘Nostalgia / homesickness’) is a splendid example of Liszt’s ability to make a work sound like a free improvisation whilst subjecting it to quite tight control. The success of this brooding piece is all the more impressive for the varied provenance of its themes: most of the material is adapted from the second of the Fleurs mélodiques, and a further melody is taken from the Fantaisie romantique. The work is prefaced by a vast quotation from the ‘Troisième fragment’ of Senancour’s Obermann: ‘De l’expression romantique, et du ranz des vaches’ (‘on Romantic expression, and the Swiss pastoral melody employed in the calling of the cows’)—‘Le romanesque séduit les imaginations vives et fleuries; le romantique suffit seul aux âmes profondes, la véritable sensibilité …’ (‘The Romanesque attracts those of lively and florid imagination; the Romantic satisfies only profound souls, real sensitivity …’).

Liszt brings the Swiss book of his Années to a balanced conclusion with Les cloches de Genève—Nocturne (‘The Bells of Geneva’), which is based on the first part only of the much longer Les cloches de G***** of the Album d’un voyageur. For some reason, Liszt discarded the greater part of that marvellous meditation, but, in compensation, he added a second section to the revised work, introducing an inspired and uplifting melody, first quietly and then with full-blooded passion, before taking his leave with the return of the distant bells.

When Liszt assembled the second of the Années, he prepared soon afterwards a supplementary volume of lighter works—Venezia e Napoli. In both of these volumes he again included revisions of much earlier pieces. Although he did not specifically indicate it, it seems only just to include in the apposite place to the first Année the Trois Morceaux suisses (‘Three Swiss Pieces’)—the revisions of the three Paraphrases which formed the third book of the original Album d’un voyageur. Like Venezia e Napoli, these three pieces are based on themes by other composers, in this case Swiss art songs by Ferdinand Huber (1791–1863) and Ernest Knop (d1850), and, although they are somewhat larger than the supplement to the Italian collection, they make a pleasing valediction to their greater companion volume in much the same way. In the Swiss case, Liszt waited just on forty years before issuing the revised versions of the three early paraphrases, whose titles, meanwhile had also changed somewhat.

The Ranz de vaches (there is simply no cognate for ‘ranz’ in English: it is the generic title of the melodies improvised by Swiss herdsmen—whether of cows, as in this piece, or of goats, as in the third—played on the alpenhorn or sung) is a slightly reworked version of the first Paraphrase in the Album, with a much shortened finale. The youthful exuberance remains but some exaggeration is tempered.

As in the earlier set, the second piece, Un soir dans la montagne (‘An evening in the mountains’), emerges as musically the finest. The outer sections have been subtly rewritten in this second version. As before, the central section depicts a violent storm, but in the revision there is more subtlety in the arrangement of the material, the storm is shorter, and the transition at the recapitulation is new.

The final piece must have pleased Liszt from the beginning, for, even forty years on, he did not feel the need to make more than a few tiny alterations to his original conception, except at the very last bars, where a more unified coda replaces the original brief outburst.