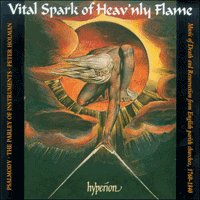 Music of Death and Resurrection from English Parish Churches and Chapels, 1760-1840

Cover artwork: The Ancient of Days by William Blake (1757-1827)
The Whitworth Gallery, The University of Manchester

This is a recording of Georgian music for Holy Week, Easter and funerals ranging from the simple psalmody associated with the galleries of rural parish churches to elaborate orchestral anthems written for the groups which developed into the Victorian choral society tradition. While the composers' names will not be familiar, this is nonetheless music of a striking and vigorous nature, here performed by the choir Psalmody—the experts in the field.

‘Once again Peter Holman's scholarship offers a fascinating glimpse of a neglected repertoire’ (BBC Music Magazine)
‘An infectious CD bringing to life a neglected period and its forgotten music. What fun parish music must have been for the likes of Jane Austen, William Wordsworth, Blake or Thackeray’ (Classic CD)

By the late seventeenth century the congregational singing of metrical psalms in Anglican parish churches had become so apathetic and unrhythmical that amateur choirs were formed to improve standards and revitalize worship. This produced unforeseen results, for the choirs eventually silenced the congregations that they had been originally formed to support. As they grew more competent they became more ambitious, beginning to perform pieces that were too complex to allow the participation of ordinary parishioners. An enormous repertory, now largely forgotten, was created for them between about 1700 and 1850. It has come to be called ‘gallery music’ because it was often performed by groups of voices and instruments in the west galleries of country parish churches. But not all parish choirs sang in galleries, not all the composers were provincial or rural, and not all of the music comes from the Church of England. There is a related but distinctive repertory of Nonconformist music, and many of the more elaborate pieces were probably written for choral festivals or other concert-like situations. At the time, the repertory was collectively called ‘psalmody’ because much of it consisted of settings of metrical psalms, but it also includes Christmas carols and hymns (see the selection recorded on While shepherds watched, Hyperion CDA66924), and music for other church festivals and special occasions. This recording is a wide-ranging survey of Georgian psalmody for Holy Week, Easter and funerals, roughly in chronological order and ranging from simple psalmody to sophisticated and elaborate orchestral anthems.

Much of the repertory consists of fuguing tunes – strophic metrical psalms or hymn tunes that include a series of fugal entries. Alas! and did my Saviour bleed? (subtitled ‘Crucifixion’) and Yes! the Redeemer rose (subtitled ‘Resurrection’) by the Chester painter, music-seller and dissenter Richard Taylor are good examples of the genre, though ‘Crucifixion’ has only a vestigial contrapuntal passage and is of more interest for its rich and dissonant harmony. As with much psalmody, the tune or ‘air’ is in the tenor (a survival of Renaissance practice), doubled at the octave by sopranos. Psalmody of this sort was originally performed unaccompanied. Organs were installed in many urban parish churches during the eighteenth century, though only about ten per cent of country churches had them by 1800. Instead, rural choirs began to be accompanied by small varied bands of instrumentalists who supported the vocal lines and played interludes or ‘symphonies’ at the beginning and between the verses; I have provided ‘Resurrection’ with the type of symphony often included in psalmody collections.

By the beginning of the nineteenth century, when Taylor wrote Angels, roll the rock away!, composers were beginning to provide fuguing tunes with written-out obbligato parts, often for two soprano instruments and bass. Taylor specifies flutes for the Handelian instrumental parts of this piece, which for reasons of balance suggests the use of solo voices rather than a choir. Perhaps it was written for domestic use. The attractive fuguing tune ‘Birmingham’, set to the words This is the day the Lord hath made, was published by the Manchester Unitarian minister Ralph Harrison, who ascribed it to ‘Greatrix’ – probably the London organist and composer Thomas Greatorex, or possibly his father Anthony (1730-1814), organist of Burton on Trent.

Vital spark of heav’nly flame, a setting of Pope’s poem ‘The Dying Christian to his Soul’ by Edward Harwood, is one of the most famous pieces of psalmody. Harwood was a weaver from Hoddlesdon near Darwen in Lancashire who supposedly ‘went to Liverpool to sing in one of the churches there, and sang until he burst a blood vessel’; he is buried at St Peter’s Church, Liverpool. ‘Vital spark’ was often performed by nineteenth-century parish choirs in four-part adaptations, though Harwood’s original uses the three-part ‘trio sonata’ writing associated with Nonconformists. Much of the vocal writing is surprisingly sophisticated and elaborate for a provincial amateur, and suggests the influence of the ‘sensibility’ style of German composers such as C P E Bach. For this reason we have allocated most of the piece to solo voices with organ continuo, interpreting a mysterious change to four-part writing at the end as the entrance of a choir. The ‘trio sonata’ scoring was also used by Henry Harington for his setting of a portion of the Burial Service, I heard a voice from heaven. It takes the form of a three-part canon with a prelude and postlude. Harington, a Bath physician, alderman and magistrate, was one of the most popular glee composers of the day.

When psalmody composers wrote anthems they tended to imitate the idiom of cathedral music. Christ being raised from the dead by Stephen Jarvis looks back to the previous century: much of it is in the idiom of Restoration verse anthems, with rapid changes of time and quick-fire contrasts between solo voices and choir, though the opening bass solo even recalls pre-Civil War composers such as Orlando Gibbons and Thomas Tomkins. Jarvis was one of the most inventive and accomplished psalmody composers, though virtually nothing is known about him.

The Easter anthem The Lord is risen by Robert Wainwright also looks back to the seventeenth century with its Purcellian writing for trumpets, drums and strings, though the airs are in a more modern minuet idiom. Wainwright was a singing man and organist at Manchester collegiate church and became organist at St Peter’s Liverpool in 1775. His anthem was published as by ‘Mr Wainwright’, so if it is indeed by Robert (rather than his father John or his brother Richard) it presumably appeared before 1774 when he received a doctorate from Oxford University.

The two anthems by John Fawcett represent the moment when psalmody began to merge with, and be replaced by, the Victorian choral society movement. Fawcett was originally a Kendal shoemaker, and was self-taught as a musician. His early works belong to the North of England psalmody tradition, but he gradually became more assured and ambitious as, presumably, he came into contact with the choral works of Handel, Haydn and perhaps even Mozart. Spirit, leave thine house of clay! was probably written for a public funeral and begins with choruses that recall the serene simplicity of Mozart’s Ave verum corpus. However, the last chorus, with its Hallelujahs, returns to more familiar Handelian territory. The text is by the Sheffield journalist James Montgomery, the author of ‘Angels from the realms of glory’. Now is Christ risen is a setting of lines from Corinthians that were (and are) familiar from Messiah, though Fawcett nearly always avoids quoting from Handel directly. The work is written for full Classical orchestra with the expected trumpet obbligatos (played here on a nineteenth-century English slide trumpet) and was ‘respectfully dedicated to the Bolton Philharmonic Society’, who presumably performed it. I hope they enjoyed it as much as we have done.

Urban church music is represented here by two arrangements of Handel. Edward Miller, organist of Doncaster parish church and an influential psalmody composer, was the author of the ingenious arrangement of the Dead March in Saul as the funeral hymn Unveil thy bosom, faithful tomb. For this performance we imagined it being sung at the graveside during a public funeral, accompanied by the wind band of the local militia, and scored for the standard military band of the time: two clarinets, two horns and two bassoons. This recording was made soon after Princess Diana’s death, so we chose to sing ‘she must ascend’ in the refrain rather than ‘he must ascend’. Handel’s great Easter hymn Rejoice, the Lord is King was never published in his lifetime and seems to have been unknown to the public at large until 1827, when Samuel Wesley published it from the autograph manuscript in the Fitzwilliam Museum in an arrangement for four-part choir and organ. In this performance we have tried to imagine how Wesley might have accompanied it in a London parish church. Timothy Roberts plays over the tune, improvising decorations, and plays interludes between the verses; the first is Wesley’s realization of Handel’s own interlude, but the rest are borrowed from a set written for Darwell’s 148th.

A great deal of religious music was written and published for domestic use in the Georgian period. Wesley’s expressive song Might I in thy sight appear is a case in point; it is a setting of verses four and five from his father’s hymn ‘Saviour, Prince of Israel’s race’. It survives in two autograph manuscripts, one with mainly figured bass accompaniment, and the other (discovered by Timothy Roberts just in time for the recording) with a fully written-out keyboard part. When rising from the bed of death, a setting of Addison’s ‘Thought in Sickness’, is by John Pixell, vicar of Edgbaston near Birmingham. It is a fine example of the orchestrally-accompanied solo song, written in an idiom mainly derived from Geminiani and Thomas Arne, and was probably written for one of the orchestral societies in the Birmingham area. O Lord, what is man! is one of the many arrangements of Haydn made by his admirer, the Leicester stocking manufacturer and amateur musician William Gardiner. With a one-to-a-part accompaniment, Raphael’s ‘whale’ recitative from Haydn’s Creation becomes an intimate and intense meditation on death.

The performances recorded here are not meant to be an exact reconstruction of the way these pieces might have been performed by particular church or chapel choirs at the time. There is much that is still unclear to us about the performance of psalmody and it would be futile to try to reproduce the low standards of ensemble and intonation reported in contemporary descriptions of country choirs. We also do not use regional accents, partly because we do not know exactly how people spoke or sang in particular localities in the eighteenth century, and partly because we feel that the use of a generalized Mummerset or Loamshire would strike a false note of nostalgic quaintness. In general, we have tried to find a performing style that draws on the best practice of the time and matches the directness and vigour of much of the music. The choir Psalmody was formed to explore English parish church music and consists of professional singers, teachers and students, mainly from the Colchester area.

Cover artwork: The Ancient of Days by William Blake (1757-1827)
The Whitworth Gallery, The University of Manchester