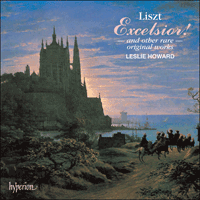 All the works on this disc are believed to be first recordings. Much of Liszt’s music is out of print, or not yet published, and frequently missing from the existing catalogues. Various pieces of one sort or another, often alternative texts of known works, are still being unearthed. Most of the pieces in this selection are rather rare, several are unpublished, and some only recently published for the first time.

‘I constantly admired his near orchestral range of sonority—his strength in grandiloquence and his hypnotic sustaining power in intimacy. Everything is played with total conviction’ (Gramophone)
‘Even if it contained nothing but the [early version of the] Consolations, this volume would be one of the most revelatory in the series … a major contribution to the catalogue. Enthusiastically endorsed’ (Fanfare, USA)
'Muy interesantes, indispensables para lisztianos' (Ritmo, Spain)

As the kind listeners who have followed this series of recordings will already have imagined, much of Liszt’s music is out of print, or not yet published, and frequently missing from the existing catalogues. Various pieces of one sort or another, often alternative texts of known works, are still being unearthed. Most of the pieces in this selection are rather rare, several are unpublished, and some only recently published for the first time.

Whilst my own enquiries in the field have occupied me intensively for upwards of thirty years, the study of Liszt’s entire oeuvre is a project which could not have been attempted without the help and support of many people. This fifty-seventh disc seems a good place in this cycle of recordings to acknowledge by name some of the people who have supplied me with copies, or led me to originals, of some of Liszt’s introuvables. First and foremost is Kenneth Souter, a member of Council and Vice-President of the Liszt Society, who owns the finest collection of Liszt first editions in the world. Other Liszt Society members who have helped me include Michael Short (with whom I am preparing a Liszt catalogue), Lord Londonderry (one of the Society’s patrons), Dr Kenneth Hamilton (who has researched all of the operatic fantasies), and Elgin Ronayne (who has obtained material from the Goethe-Schiller Archive in Weimar with the kind assistance of the curator Frau Liepsch). I am grateful to Dr Kate Rivers at the Library of Congress, to Dr Mária Eckhardt at the Budapest Liszt Museum, and to Imre Sulyok and Imre Mezö at Editio Musica Budapest. And various friends and well-wishers around the world, including Caine Alder of Salt Lake City, Riccardo Risaliti of Florence, Serge Gut of Paris, Robert Threlfall of London, Albert Brussee of Amsterdam, and Don Manildi of Washington have all shed welcome light on obscurities.

The old Thematisches Verzeichnis of Liszt’s works, which appeared in two editions during the composer’s lifetime, mentions a solo piano version of the prelude to the Longfellow cantata Die Glocken des Strassburger Münsters, S6 (1874), published by Schuberth. This publication does not seem to have been made, and no manuscript of a piano version survives, but the piece has been cited in all subsequent Liszt catalogues. The present writer hopes to have solved the mystery: the full score of the cantata bears a footnote on the first page of the music suggesting that the prelude could be performed without the voices as a separate orchestral piece. The hope was that, if the elusive piano and vocal score which Liszt prepared could be tracked down, a similar instruction might allow the piano to play the prelude alone. After some searching, a copy of the Klavierauszug was located in the Library of Congress, and it happily revealed that the prelude could indeed be performed without the voices as a piano solo. Interestingly, the vocal score transposes the prelude from E flat in the orchestral version to E major, presumably entirely for the convenience of the pianist, but also establishing a connection with Liszt’s other piano pieces in E major inspired by his religious faith, such as the ‘Bells of Rome’ Ave Maria (recorded on volume 7) or the second St Francis Légende. The ending of the piece is slightly different from the orchestral version, too. All told, Liszt’s Excelsior! exists for mezzo-soprano, mixed chorus or male chorus, and orchestra or piano, for orchestra, for solo piano, for piano duet, and for organ. Wagner knew the work well, and ‘borrowed’ (with very uncustomary acknowledgement) Liszt’s theme for the opening of Parsifal, a circumstance remarked on by Liszt in the manuscript of his very sad little piece Am Grabe Richard Wagners. In the cantata, Liszt contents himself with the repeated setting of the one word ‘Excelsior!’ from Longfellow’s Golden Legend, reserving the second part of the cantata proper to set the text of the section ‘The Bells of Strasburg Cathedral’ in full. Not a word about ‘the banner with the strange device’ known to us all from Balfe’s famous parlour duet. But Longfellow happily accepted Liszt’s dedication.

This programme contains yet two more accounts of Liszt’s beloved Die Zelle in Nonnenwerth (‘The Nonnenwerth Cloister’). (The final version is in volume 25, the third in volume 26, and the first in volume 51.) The present – second – version is effectively two versions in one, because its more florid alternative text proceeds alongside the main text for much of the work, printed together on four staves. The two texts are both offered here because of their great divergence in letter and spirit, even though the general air of melancholy in the rueful recollection of happier times – implied in the original song and in the occasion of its conception – permeates both.

Liszt scholars had long been aware of an earlier unpublished version of the fifth Consolation under the title Madrigal – in an inaccessible manuscript in a private collection. But a manuscript, partly in Liszt’s hand and partly in the hand of a copyist, shows there to be a complete set of six pieces in an earlier version, and, for the moment, we must presume that the copyist’s manuscript of No 5 agrees with the Madrigal manuscript in all but title. The first set of Consolations has recently been published for the first time (in tandem with the second set), under the scrupulous editorship of Mária Eckhardt. The most obvious difference from the later set (in volume 9 of this series) is the third piece – another piece altogether, which later served as the main material for the opening of the first Rapsodie hongroise. But, the lack of the great D flat Consolation No 3 aside, the early versions are a revelation in their generally less pristine view of the material. Only No 6 is more restrained than its later counterpart – and yet perhaps fits better in the scheme of the series on that account. Those familiar with the later set will find themselves constantly and delightfully deflected from their expectations by music which seems every bit as valid as the final conceptions.

The two short cycles, Geharnischte Lieder (‘Songs in Armour’) and Rosario, remind us again of the sheer variety of Liszt’s musical palette. As so often with Liszt, the genesis of his Geharnischte Lieder is a little complicated: the piano pieces derive not just from the eponymous unaccompanied male choruses of 1860 in the collection Für Männergesang, but also from earlier versions of these choruses with piano accompaniment. The order and titles of the piano version are the same as in the later choral version, which credits the texts to Carl Götze, whilst the earlier version (with Nos 2 and 3 the other way about) ascribes them to Theodor Meyer (the present writer would be grateful for any enlightenment on this subject). Vor der Schlacht (‘Before the battle’) and Es rufet Gott uns mahnend (‘God calls and warns us’) are both settings of a poem apparently originally called Trost (‘Consolation’), in which soldiers are called by God to the sacred battle; Nicht gezagt! encourages leaden-hearted soldiers under a leaden sky to enter the fray without hesitation or lament.

Rosario, which is in fact marked by Liszt as transcribed for organ or harmonium – from his work for mixed chorus and organ – is as readily justified as a piano piece as are those similar transcriptions which are marked for harmonium or piano. In any event, organists seldom approach these delicate manuals-only pieces, and the harmonium is at best a stop-gap solution. As the title implies, the original works are three settings of the Ave Maria, and the subtitles show Liszt’s plan to convey, with the subtlest of musical distinctions, different aspects of the holy Marian mysteries.

The final versions of the two Élégies (in volume 9 of this series) are perfect pieces of their kind. But it is interesting to examine the unpublished early manuscript material, especially of the first piece. It is clear that Liszt added the introduction later, and that he had no fewer than five attempts at the coda of the piece originally entitled Schlummerlied im Grabe (‘Lullaby in the grave’). The use of his coloured crayon and other instructions to the engraver indicate that his intention to publish the piece was well advanced. For some reason he withdrew it, and only then made the version for chamber ensemble and the piano solo text of the definitive version. The Schlummerlied differs from the Élégie in details of texture in almost every bar, but both are inscribed to the memory of Mme Mukhanov. The fragments of sketches – Entwurf der Ramann-Elegie – for the first draft of the second piece (composed for Lina Ramann) were collected by Liszt’s pupil August Göllerich. Although they had been later rejected by Liszt, they yield one passage in particular – at the climax before the coda – which is well worth preserving (the rest being more or less identical to passages in the published text). This passage seems to have given Liszt some trouble – and several variants are sketched and then deleted – and even the published text differs between the piano solo and the instrumental versions.

The remaining pieces in this recital are of an occasional nature. The shorter version of Weimars Volkslied – a piece which Liszt had developed from a theme in his Huldigungsmarsch (in volume 28) – appeared in print in 1873, just one of almost countless versions for a variety of forces for which Liszt adapted the melody which he had clearly hoped would become some kind of anthem. Apart from being in Liszt’s hand and dated by him ‘Villa d’Este, ’76’, the National Hymne remains something of a mystery. Liszt has written ‘Kaiser Wilhelm!’ over the first notes, but, although the piece resembles a piano arrangement of a chorus, no such chorus (presumably an original work by Liszt) has yet come to light.

The Fanfare is an unpublished transcription – in a copyist’s hand but entitled and dated ‘Weimar ’75’ in preparation for the engraver in Liszt’s hand – of the first of the Zwei Festgesänge zur Enthüllung des Carl August Denkmals in Weimar am 3. September 1875: Carl August weilt mit uns (‘Two festival songs for the unveiling of the Carl August memorial: Carl August stay with us’) originally scored for men’s chorus, brass, timpani and organ.

Finally, the five-versed account of Weimars Volkslied with which this programme closes is the piano version of the choral work composed in 1857 to mark the laying of the cornerstone of the monument to the aforementioned Prince Carl August. Of its kind, it is an excellent ceremonial piece, with moments of depth and beauty not normally associated with such music.