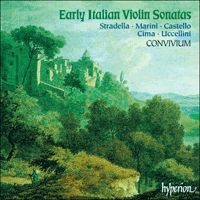 Everybody will know by now that Elizabeth Wallfisch has a special interest, affection and regard for the 17th- and 18th-century Italian violin schools. She has already recorded much music by the likes of Tartini, Corelli, Locatelli and others with her group, The Locatelli Trio, and also with The Raglan Baroque Players under Nicholas Kraemer. Here is a varied and fascinating collection of pieces by some of the lesser-known composers from a generation or two earlier than those composers.

‘Certainly worth exploring. Exquisitely stylish performances of some enterprising repertoire’ (Classic CD)
‘Impeccable, stylish and full of life. The recording is up to Hyperion's usual standard: need more be said?’ (Hi-Fi News)

In the not too distant past it was believed that the growth of idiomatic instrumental music was primarily the achievement of the early seventeenth century, but instrumental treatises such as Silvestro Ganassi’s La Fontegara (1535) and Diego Ortiz’s Trattado de glosas sobre clausulas (1553), with its discourse on solo viol playing with keyboard accompaniment, conclusively prove that the solo sonata had long precedent. Sets of variations such as Marini’s Romanesca derive directly from these improvisatory practices. It is nevertheless true that only from the turn of the century is there a substantial repertory of published works for small ensembles of one to three instruments and continuo. Among the earliest of these are the few instrumental pieces contained in Gian Paolo Cima’s large collection of sacred vocal music, the Concerti ecclesiastici of 1610. As he was then organist at S. Celso in Milan, it seems that the structures on the use of instruments in church made by the austere Milanese Archbishop Carlo Borromeo at the time of the Council of Trent had had no lasting impact in the city. Cima’s works are by no means mere prototypes of the genre, but combine rapid passage-work with sections of strict polyphony into highly complex and original structures. In a note to the Benign Reader he asks the performer to refrain from using impromptu embellishments – a not uncommon attitude of composers in the seventeenth century. The florid written-out divisions in many early seventeenth-century sonatas may indeed suggest a reaction against the improvisatory freedom allowed in the sixteenth century.

It was in the 1620s that the sonata for small ensemble triumphed over every other instrumental medium, as demonstrated by the two collections of Dario Castello (1621 and 1629). Of the twenty-nine pieces, only five call for his largest combination of four instruments and continuo, although it has to be said that Biagio Marini’s Opus 8 is slightly unusal in its inclusion of six canzoni a 4 and four canzoni a 6 along with its forty or so pieces for one, two and three instruments. On its title page, Marini refers to ‘curiose et moderne inventione’, no doubt referring to such features as the use of scordatura and extensive chordal playing on the violin, while Castello styles his collections as ‘Sonate concertate in stil moderno’; there can be little doubt that both composers were deliberately catering for the current vogue for novelty. The extent of Marini’s endeavours in this direction may easily be gauged by comparing the substantial pieces of Opus 8 such as the Sonata quarta per sonar con due corde with the three early Sinfonias from his Opus 1 (1617/8), La Orlandina, La Gardana and La Ponte, although the comparison is slightly misleading in that all three offer the option ‘violino ò cornetto’, obviously imposing certain restrictions on the style of writing. It also has to be acknowledged that Castello, who was himself a Venetian wind player, may have intended cornetto by his ambiguous ‘soprano’, although this is certainly ruled out by the wide range of the part in the Sonata seconda a sopran solo. Whatever the case, these sonatas of the third decade of the century show a colossal increase in technical demands, and this was fully acknowledged by Castello in the 1629 reprint of his Opus 1, where he advises the Reader that ‘although at first sight these sonatas of mine may appear difficult, their spirit will not be destroyed by playing them more than once, and in doing so they will become practised, thus rendering them the easiest of works to play’.

The burgeoning sonata for small ensembles reached a peak in the 1620s. The apparent massive decline after 1630 is probably attributable not to a lack of interest but to the collapse of the Venetian publishing industry, a victim of the grave economic crisis brought about by the cataclysmic plague which followed the Imperial troops as they marched across the plains of Northern Italy to the Sack of Mantua in 1628. Although the industry never fully recovered, the situation had improved by the late 1630s when the priest violinist, Marco Uccellini began his remarkably productive career spanning a period of thirty years. Without his contribution, the history of the Italian solo sonata in the mid-century would be bleak indeed. All this development from the early years of the century was very much confined to the regions of Northern Italy which had easy access to the Venetian publishing houses. In the 1660s, however, the Bolognese presses suddenly awakened to the commercial exploitation of the musical dilettante, and cornered the market in lightweight da camera music, mainly dances.

Alessandro Stradella, however, learnt his instrumental style in Rome where the greatest instrumentalists of the day hardly ever published their instrumental music. This would not have been in the interests either of the patron or the performer, both of whom naturally wished to keep his music to himself, and apart from an occasional piece in an anthology, Stradella’s music therefore remains in manuscript. The chronology (and sometimes even the authorship) of these hand-written sources is debatable, but all predate 1682 when Stradella met an untimely end at the hands of an assassin. It is immediately evident from the toccata-like opening of Sinfonia 22 (a notable feature of the Roman sinfonia) that this is music for professional performers rather than amateur noblemen, since it requires a degree of competence never encountered in the instrumental duos then issuing from the Bolognese presses.

It is a remarkably persistent belief of Northern Europeans that Italian music of this period is homogeneous, but the enormous differences even between Cima’s Milanese compositions and the Venetian works of Castello, let alone the Roman sinfonias of Stradella, reveal a rich stylistic diversity. There are nevertheless certain consistencies of medium which cross these regional divides. Most Italian composers observed a sharp distinction between the solo and duo sonata, as seen at its most extreme in the two sonatas from Marco Uccellini’s Opus 4 (1645) La luciminia contenta a violino solo and the Sonata ottava a violino e basso. (Note that ‘basso’ refers to the melodic bass instrument, since Italian designations almost never include the continuo.) In Uccellini’s composition ‘a violino solo’ the basso continuo provides an unobtrusive, largely non-thematic harmonic support very occasionally providing an imitation during a rest in the violin part. It functions almost exclusively as a foil for the florid display of divisions in the violin in which most interest resides. In his duo sonata, however, each melodic part is of equal thematic importance in an intricate polyphonic texture and this is the raison d’être of the piece rather than instrumental virtuosity. The continuo is now relegated to its traditional role as ‘basso seguente’, simply doubling the bass part, and in all probability much of the violin part would have been reproduced in the realization. This absolute distinction of genre remained remarkably intact throughout most of the seventeenth century as can be seen from Stradella’s Sinfonia 22, but was soon to be superseded by the new unaccompanied duo which combined the virtuosity of the solo sonata with the imitative fabric of the sonata a 2, as represented by Corelli’s Opus 5.

Judging from printed editions, the duo sonata was fairly popular in the first half of the seventeenth century, whereas it was not until Uccellini’s Sonate e canzoni a violino solo of 1649 that a collection of solo violin sonatas appeared. This may seem odd in the country that not only invented the violin but whose violinists were renowned thoughout the courts of Europe. This enigma may easily be explained simply because it was impossible to print complex violin music within the system of typography then used by all Italian publishers. Chordal writing, for instance, was virtually ruled out as notes could not be superimposed. When Uccellini wished to include almost continuous double stops in several pieces of his Opus 7 (1660) he was forced to publish two separate violin parts for the one violin which the performer would then need to write out! Published solo sonatas would have to be written in a specific way to take account of these limitations and cannot therefore be taken as a true representation of advanced violin playing in Italy. Virtuoso violin music circulated in manuscript, most of which has subsequently been lost. Consequently, almost nothing survives of the most famous players of the day such as Alfonso Pagano dal violino and Ercole Gaibara, both of whom enjoyed much more esteem than the relatively little-known Uccellini who spent much of his life in the confines of the Court of Modena.

It is against this background that the extreme importance of Marini’s Opus 8 (1626/9) becomes apparent. The Sonata per sonar con tre corde a modo di Lira and the Sonata quarta per sonar con due corde contain the most extensive chordal writing of any Italian solo violin sonatas until the last quarter of the seventeenth century. Various doubtful theories have been advanced to explain this phenomenon, attributing their inclusion to his presence at the Court of Neuberg where apparently German violinists were much more skilled, but this would negate the whole purpose of his engagement there as one of the best violinists of the day. Once more, the explanation lies entirely in the technical problems of production. While most of Opus 8 is typeset in the normal manner, the chordal passages in the violin have been carved in woodblock – a long and expensive process which few music publishers would ever have entertained if only on financial grounds. Scholars have often noted the discrepancy between the printed date of its publication as MDCXXVI and the emendation in ink to MDCXXVIIII, but a delay of three years between the inscribing of the title page and the final publication may not have been an unreasonable time-span. This was an experiment that other Italian publishers did not wish to copy, and this accounts for the absence of double-stopping in Italian prints of violin sonatas over the next fifty years. Corelli’s Opus 5 in 1700 was the first set of advanced violin sonatas to be produced in Italy using the new method of copper-plate engraving. We must reconcile ourselves to the fact that the true state of Italian violin playing from Marini’s Opus 8 until the early eighteenth century is likely to remain a closed book to us.