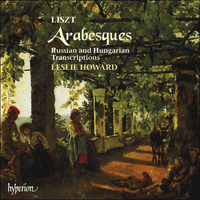 ‘I constantly admired his near orchestral range of sonority—his strength in grandiloquence and his hypnotic sustaining power in intimacy. Everything is played with total conviction’ (Gramophone)
‘A most enjoyable collection’ (The Penguin Guide to Compact Discs)
'Muy interesantes, indispensables para lisztianos' (Ritmo, Spain)

This programme of rare works on Russian and Hungarian themes exemplifies the philanthropic Liszt: most of these pieces are based on works or themes by his contemporaries, and show Liszt taking the opportunity to add his name to theirs in order to increase their sales as well as to disseminate their work. Some of his friends in Russian and Hungarian society are featured, too, and if their innate art is pitched at rather an amateur level, Liszt soon transforms the ideas into something memorable.

The two transcriptions which Liszt eventually issued together under the title Arabesques were conceived separately, and Solovei appeared in an earlier, rather boisterous version with a title page which attempted to make Cyrillic letters from Roman ones—with laughable results. The revised version used to be a staple encore piece, refashioning a charming song by a rather neglected minor Russian master with attractive emphasis on the imitation of the nightingale’s song. The printed editions of the Chanson bohemienne make no mention of the melody’s origins, but it seems to be the work of one Pyotr Petrovich Bulakhov (not to be confused in any way with Konstantin Bulhakov—see below), about whom the present writer is sadly uninformed. As with many of Liszt’s song transcriptions, the piece is tantamount to a set of variations.

Count Michael Jurjew Wielhorsky (1788–1856), to use his preferred transliteration, was a Russian singer and composer of independent means, an astute patron of the arts and a friend of both Chopin and Liszt. His music is mostly forgotten today, but Liszt made two transcriptions of one of his songs, variously issued under the original Russian title, which translates as ‘I loved her’, or, according to the French text of the song, Autrefois. Liszt met Wielhorsky along with several other Russian composers, mostly gifted amateurs from the aristocracy, when he visited St Petersburg in the early 1840s. Apart from a little cadential elaboration, Liszt’s transcription is delicate and straightforward.

Liszt was very enthusiastic in his later years for all of the new music coming out of Russia. He supported and encouraged Tchaikovsky and the five composers of the ‘Mighty Handful’, and even conducted the teenage Glazunov’s First Symphony in Weimar. He had long been involved in the dissemination of the music of Glinka, Dargomizhsky and Rubinstein, and was particularly interested in the practical teaching methods of the Russian school. Dargomizhsky’s Tarentelle slave for piano duet is a maestro e scolare affair in which the master takes the piece proper, and the student plays an ostinato pedal-point bass. Liszt, who simply called his transcription Tarentelle, sets the pedal point up so well that one scarcely realizes that it is not, and cannot be, present in every bar. He greatly extends the original and manages with his customary art to preserve Dargomizhsky and write real Liszt simultaneously.

The Galop russe returns to the earlier group of composers. The music of Konstantin Bulhakov (1812– 1862) is hardly likely to reappear in the concert hall, but this gallop is a veritable hit which Liszt obviously enjoyed transcribing, since he issued two versions of it. The second has a new introduction and coda which seem to have some subliminal connection with Beethoven’s Turkish March from The Ruins of Athens.

The original composer of the A minor Mazurka is not divulged in the first edition, which merely suggests that the piece was written by an amateur from St Petersburg. It has been suggested that Wielhorsky may have written the work, but there is no evidence to hand at the time of writing. In any event, there is no particular case to be made for the original composer of this rather slight work, whose angularities Liszt has not apparently striven to repair.

Prelude and Polka: it is clear from his correspondence that Liszt was thrilled with the collaborative volume of variations and character pieces on a children’s theme (for some reason identified as ‘Chopsticks’ in some catalogues, but actually just a simple exercise in the widening of the interval of a major second to an octave, very similar to the great organ fugue subject by Bach for his so-called ‘Wedge’ Prelude and Fugue) which first appeared in 1879. As with Dargomizhsky’s Tarentelle, but with the student player in the treble, the little theme is played throughout as an ostinato, while the composition unfolds below it. For the second edition of these, Paraphrases: 24 Variations et 15 petites pièces sur le thème favori et obligé by Borodin, Lyadov, Cui and Rimsky-Korsakov, Liszt composed a touching little tribute to be inserted before Borodin’s Polka. On one part of the single-page manuscript Liszt describes his work as a variation, on another as a prelude, the more apt description. Despite the entries in the published catalogues, Liszt’s Prelude is for piano solo. Borodin’s amusing Polka is included to set Liszt’s prelude in context. We are grateful to Philip Moore for so kindly obliging with the ‘thème favori et obligé’!

The Russian part of this programme concludes with Liszt’s enormous transcription of the orchestral Tarentelle by César Cui (1835–1918). Liszt enlarged the shape and scope of the piece, using it as a springboard for one of his last fantastic flights of imagination, comparable with his reworking of Saint-Saëns’s Danse macabre.

The Hungarian part of the programme begins with yet another version of the Rákóczi-Marsch. (Other versions appear in Volumes 27, 28 and 29 of this series.) Although Liszt made several ostensibly simplified and scaled-down versions of quite a number of his piano pieces, he never seems to have understood sufficiently the technical range of the average amateur. So, whilst many difficulties are removed, other rough places are not really made plain, and such things as the ‘version populaire’ of the Rákóczi-Marsch never quite fulfil their vaunted object. As ever, Liszt cannot help but add tiny harmonic, melodic or rhythmic details which differ from the concert versions of the piece—and this text is only one of seven for solo piano which survive complete.

As the great Hungarian Liszt scholar Dr Mária Eckhardt has pointed out, Liszt’s work on the Virag dál—Chant des fleurs (Flower Song) of Kornél Ábrányi Sr. (1822– 1903) is not really that of transcription, but of elaboration. Ábrányi’s original is a song, and he himself transcribed it for piano. Liszt made numerous small alterations to the transcription, and added a certain amount of new material, particularly at the end of the central section.

Count Léo Festetics (1800–1884) was one of the band of Hungarian aristocrats who sponsored the young Liszt. He is the dedicatee of many of Liszt’s specifically Hungarian works, and he remained Liszt’s lifelong friend and supporter. As a composer he remains almost unknown, and the Liszt transcription of his song Spanisches Ständchen (Spanish Serenade) has not yet been published. The manuscript is in the Goethe-Schiller Archive in Weimar, who generously provided a copy to the Liszt Society. From the state of this much-altered manuscript it is clear that Liszt took quite some trouble to decide the final texture of the transcription, which comes over as an excellent example of the extraordinarily vast literature of Spanish pieces by non-Spanish composers.

Count Géza Zichy (1849–1924) was quite a successful opera composer in his day, and was further renowned for producing a large corpus of piano music for the left hand alone (as a boy he had lost his right arm whilst hunting) including a viciously difficult transcription of Schubert’s Erlkönig. His Valse d’Adèle is the third of a set of Six Studies of 1876 for the left hand (dedicated to Liszt, who had arranged for their publication) which Liszt expanded in every sense in a version for two hands. (Liszt’s only left-hand piece, Ungarns Gott, was written for Zichy. See Volume 12.)

The splendid Neue Liszt-Ausgabe provides copious information upon the rare Revive Szegedin! which is gratefully paraphrased here: Ignác Szabadi Frank (1825– after 1879) was the amateur composer of a Marche turque-hongroise which was utilised by Jules Massenet (1842–1912) as the basis for an orchestral work dedicated to Liszt and performed in Paris in June of 1879 for the benefit of the flood victims of Szeged (the town had been destroyed by the overflowing of the river Tisza in March of that year). Within a month Liszt had prepared his piano transcription, which did not appear in print until 1892. Massenet’s title was Marche héroïque de Szabady: Liszt’s French title, Marche hongroise de Szabadi, orchestrée par Massenet, makes the connection with the catastrophe plainer, but the piece itself is rather severe and quirky for something which must have been intended as a fund-raising crowd-pleaser.

The Valse de concert based on the Suite en forme de valse for piano duet by János Végh (1845–1918; the vice-president to Liszt at the Academy of Music in Budapest from 1881) is one of the rarest of the published pieces of Liszt. Happily the Liszt Society has recently reprinted it from the present writer’s copy of the one and only edition which appeared briefly in Hungary in 1889. Although the thematic material is innocuous enough, Liszt turns it into the most attractive vehicle for the wistfulness of his old age, and the language has much in common with his late Valses oubliées.

Count Imre Széchényi (1825–1898) is himself the dedicatee of Liszt’s transcription of his Bevezetés és magyar induló (Introduction and Hungarian March), almost as if Liszt wanted to cover himself in advance for taking many liberties with the original. In fact the piece becomes all but an original Hungarian Rhapsody, and resembles very closely the four late Rhapsodies—numbers 16 to 19—and especially the last, which is actually based on music by Kornél Ábrányi. Here, as in all the later Hungarian publications, Liszt insisted that his Christian name was given only in Hungarian.